In the back and forth over European missile defense, Poland makes the latest move

NATO and Russia are in a missile race, and Poland may have just raised the stakes.

The Polish government announced Tuesday that it would buy the U.S. Army’s Patriot air-and-missile defense system, a move widely seen as a response to Moscow’s upcoming deployment of nuclear-capable missiles to Kaliningrad on the Baltic Sea.

Five other NATO countries already deploy the Patriot system — which can knock down missiles, drones, and small aircraft — but none are as far to the east as Poland, nor so close to Kaliningrad, a Russian exclave which is already bristling with missile systems and other advanced Russian military hardware.

Poland has been in talks with various defense contractors for several years about building a missile defense capability, but Russia’s likely deployment of Iskander advanced nuclear-capable missiles to Kaliningrad by 2019 seems to have forced Warsaw’s hand. Each Iskander battery has two guided missiles with a range of about 300 miles. Russia has already sent Iskander systems to Kaliningrad twice for exercises, but has later withdrawn them.

“We also need to have an answer to it. Those Iskander missiles can hit Poland but also Germany,” Polish Defense Minister Antoni Macierewicz said earlier this year. He added Tuesday that his country plans to eventually buy eight Patriot missile batteries, and while he wouldn’t discuss cost, the deal could be worth as much as $5.6 billion.

Poland had considered buying other missile defense systems, including Lockheed Martin’s Medium Extended Air Defense System (MEADS) and Israel’s David’s Sling, but both of those are still under development and Polish officials needed a quick fix.

The Iskander deployment is itself a response to the installation in May of a new U.S.-built missile defense system in Romania, which Moscow sees as a direct threat to its aircraft. Plans for the Aegis Ashore Missile Defense System had been in the works for years, and U.S. and NATO officials have long said that the system was put in place to protect Europe from Iranian missiles. But the Russians have rejected that explanation.

“From the very outset we kept saying that in the opinion of our experts the deployment of an anti-missile defense poses a threat to Russia,” Russian spokesman Dmitry Peskov said at the time. “The question is not whether measures will be taken or not; measures are being taken to maintain Russia’s security at the necessary level.”

At the unveiling ceremony, NATO Secretary General Jens Stoltenberg said that “missile defense is for defense. It does not undermine or weaken Russia’s strategic nuclear deterrent.”

But while Moscow complains about NATO shrinking its airspace, the Kremlin has built its own wall of defensive systems stretching from Syria to the Finnish border, including an S-400 sent to Crimea in August that has a range of up to 250 miles. 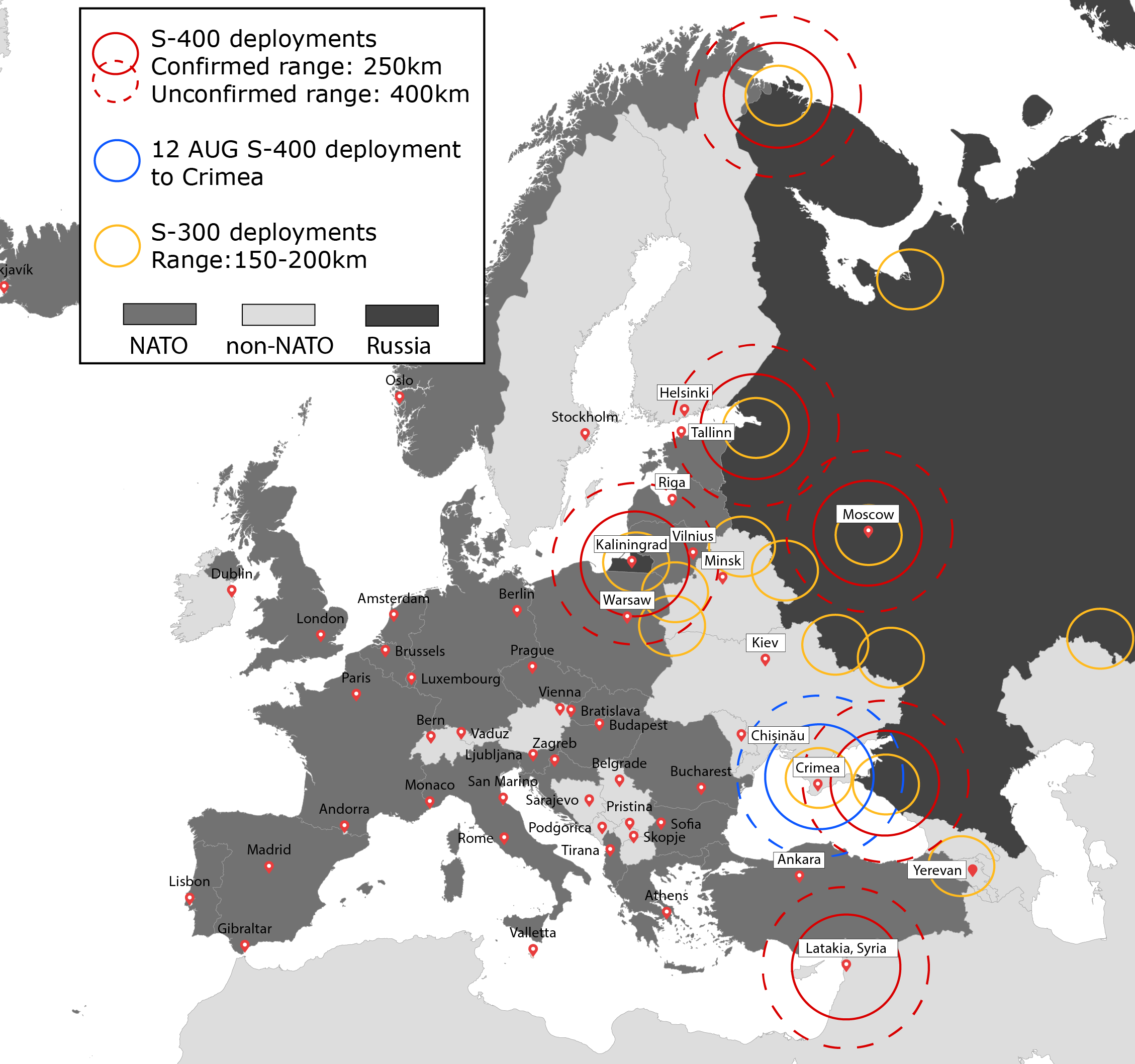 Source: Institute for the Study of War

The Institute for the Study of War’s Kathleen Weinberger wrote in an analysis last month that the deployments of the S-400 air defense system create “bubbles” that deny the airspace to NATO aircraft over much of the the Baltic States, significant portions of Ukraine and the Black Sea, as well as northern Poland, Syria and parts of Turkey.

Russian systems in Syria and Crimea, along with their Joint Air Defense Network in Belarus and Armenia, can “impede the ability of the U.S. to defend its NATO allies by disrupting the ability of US air forces to access conflict zones in the event of a crisis.”

Zambia Is on the Verge of a Pandemic-Related Debt Default