Mao the Man, Mao the God

Mao Zedong was dying a slow, agonizing death. Diagnosed with Amyotrophic Lateral Sclerosis (ALS) in July 1974, he gradually lost control of his motor functions. His gait was unsure. He slurred his speech and panted heavily. The decline was precipitous. In 1956 Mao, then 62 years old, predicted he’d live until year 2000 before going up “to see Marx in Heaven.” In 1966 the septuagenarian swam in the murky waters of the Yangtze River to demonstrate his strength and vitality. But by 1976, on the 27th and final year of his reign, the “Great Helmsman” could breathe only when lying on his side, surrounded by doctors and nurses.

In his final months, Mao rarely received visitors. One of the last foreigners to see him alive was New Zealand’s Prime Minister Robert Muldoon, on April 30, 1976. The record of their conversation comes from New Zealand’s archives, and has just been published for the first time.

Before he was allowed to see the Chairman, his Chinese hosts asked Muldoon to be gentle with his handshake. According to Muldoon’s record, Mao “was assisted, almost lifted, from his armchair to a standing position,” to shake hands with him and his party only to “slump back in it in a state of seeming collapse.” 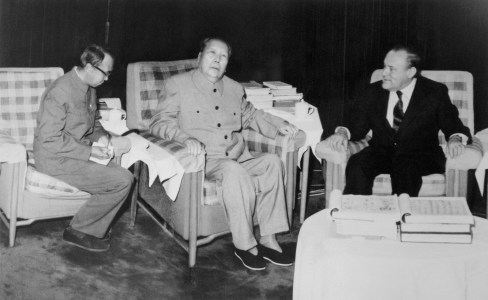 “What emerged from Mao’s mouth,” the record continues – “were occasional grunts and groans as he struggled to get out the necessary word. The interpreter/nurse, intelligent and gentle, would decipher these noises – sometimes seeming to peer into his larynx – and decipher them (presumably in Mandarin) to a male interpreter who put them into polished, often colloquial, English.” It was a sorry and shocking sight, and a poignant reminder of the horrific consequences of a man’s failure to part with political power.

Just days after meeting Muldoon, Mao suffered a heart attack, then one more in June, then again in early September. He died on September 9, at the age of 82.

It took years for Beijing to walk back the deification of the People’s Republic founding leader – to show that he was in fact “Man, Not God,” as the English language title of a Mao biography written by the leader’s former chief of bodyguards has it.

But the Chinese, and Mao himself, could be almost forgiven for thinking otherwise – especially during Mao’s last decade.

“Long live Chairman Mao! Love live Chairman Mao Zedong! Long, long live Chairman Mao!” Adulating worshippers crowded Tiananmen Square in the center of Beijing, hoping for a glimpse of Mao’s friendly and imperious face. By launching the Cultural Revolution in 1966, Mao wanted to tap into the Chinese people’s enthusiasm for him to feed the fading vigor of Communist revolution and to transform the ruling Chinese Communist Party – which he felt had grown rotten on the inside. 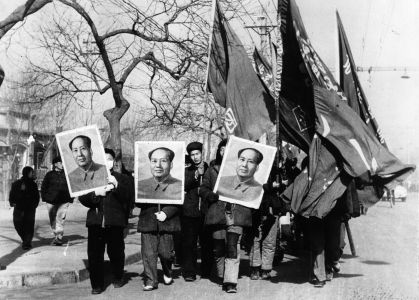 Members of the Red Guards carry large portraits of Mao as they parade through the streets of Beijing, 1967. (Hulton Archive/Getty Images)

But it did not take long before Mao’s delight turned to disillusionment. In 1969 he called on the army to restore a semblance of order, appointing Minister of Defense Lin Biao as his heir-apparent. But Lin Biao, too, disappointed Mao. In 1971 he fled north after the uncovering of his son’s plot to assassinate Mao. Lin never made it: his plane crashed in Mongolia.

Aware of unleashing a chaos that he was no longer able to control, and fearful of Soviet invasion, Mao turned to the United States. In February 1972, after years of careful diplomacy, U.S. President Richard Nixon arrived in Beijing to meet with Mao in person. “I voted for you during your election,” Mao told him, somewhat facetiously. “I like rightists.” He later proposed to the Americans to establish what he called a “horizontal line” of nations opposed to Soviet expansion, which would include China and the United States – as close as the Chairman ever came to the idea of an alliance with the country he had spent his lifetime vilifying.

And yet, in the end, he was disappointed. After losing Nixon to Watergate (something Mao never did understand), he was left with Henry Kissinger. “A bad man,” Mao said of Kissinger in 1975 in a conversation with his old soulmate, the longtime North Korean dictator Kim Il Sung. Kim agreed, calling Kissinger “wily,” according to records obtained by the Wilson Center’s Cold War International History Project.

The problem, Mao thought, was that Kissinger was trying to play the China card in courting the Soviet Union. “We see that what you are doing is leaping to Moscow by way of our shoulders,” he told Kissinger, who vehemently denied such intent. Mao felt that it was all too similar to Munich: the West was appeasing the Russians as they had appeased Adolf Hitler in 1938. The result, he feared, would be war.

As he approached death, Mao was worried. He was never able choose between dismantling the international order and finding China’s place within it. His many revolutions failed. His efforts to build up a relationship of equals with the United States delivered much less than he expected. “When the rain comes from the mountain, wind fills up the pavilion,” Mao would say, citing a Tang dynasty poem by Xu Hun, “Ascending the East Tower.” In those final months Mao felt like Xu, standing atop that tower, feeling the wind, sensing the coming of the inevitable storm.

But there was no war after Mao’s death. Instead, the new generation of the Chinese leaders set out to repair the misery that that the Chairman had inflicted on his country during his lengthy reign. In his crystal casket in Tiananmen Square, Mao remained oblivious to the changes around him as China embraced capitalism with gusto. Beijing turned into a glittering metropolis and China into the world’s economic powerhouse, something Mao had failed to achieve through his reckless economic experiments. 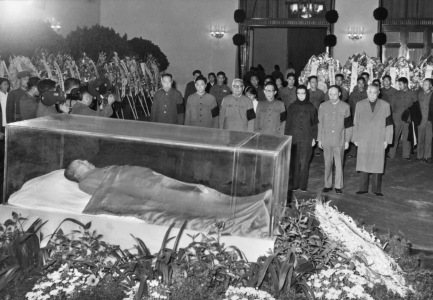 Mao’s eventual successor Deng Xiaoping called on his countrymen to “bide their time and hide their strength,” an advice the Party leadership followed until recently. Only with the rise of Xi Jinping in 2012 was this caution cast overboard. Like Mao, Xi dreams big: Mao wanted revolution, Xi, the rejuvenation of the Chinese nation. Like Mao, Xi won’t pull punches. He is of the generation that held up the red banners in Tiananmen, worshipping the demigod above.

Since coming to power in 2012 Xi has engineered the downfall of his opponents, unleashed a campaign to purge the Party of corrupt influences, and instituted an especially harsh crackdown on dissent. Detractors have accused him of building a personality cult not unlike Mao’s. And like Mao, he has never been able to decide whether to seek the dismantling of the current world order or to find China’s place within it.

Rumors have recently circulated in China that the top leadership body the Politburo Standing Committee has discussed moving Mao out of the mausoleum in Tiananmen Square, back to his home village of Shaoshan. If true, these would represent an effort to part with Mao’s haunting physical legacy. His spiritual legacy is more difficult to purge. Doing so would require exposing the unspeakable brutalities of Mao’s rule, the dark history of paranoia, blind worship, and reckless pursuit of utopian projects no matter what the human cost. But this legacy supports the unwieldy edifice of the Party, whose leaders, born and raised in the Mao era, are yet unwilling to part with his ghost forty years after the dictator’s death.

Sergey Radchenko is a professor of international politics and director of research at the School of Law and Politics at Cardiff University. He is the author, most recently, of Unwanted Visionaries: The Soviet Failure in Asia at the End of the Cold War. Twitter: @DrRadchenko