Here’s the Bomb Russia Is Using to Flatten Aleppo

As Moscow’s massive “bunker buster” falls on civilians, Russia sends a new strike plane to back up the Syrian army

With Syria’s short-lived ceasefire buried under the rubble of the most intense bombing campaign Aleppo has seen since the start of Syria’s five-year civil war, Russia is rapidly increasing its military support for the regime in Damascus.

Over the past several days, videos have emerged of the Russian Su-25 Frogfoot strike plane supporting the Syrian army in Latakia, proving Moscow has redeployed the deadly aircraft just months after having recalled them as part of the so-called drawdown of forces. The Su-25 is to Russia’s air forces what the A-10 Warthog is to the U.S. arsenal: a low-flying jet that can maul targets on the ground.

But the aircraft helping prop up Assad’s forces pale in comparison to the wave of destruction being unleashed across rebel-held eastern Aleppo. Russian aircraft are hitting civilian neighborhoods with incendiary bombs, cluster munitions, and what is thought to be the 1,000-lb. BETAB-500 “bunker buster” bomb.

The BETAB-500 — designed to penetrate deep underground by punching holes in concrete before detonating, taking the whole building down — isn’t new to the Syrian battlefield. Russian planes have been dropping it since the start of its air campaign in September 2015, and military officials have boasted of using the bomb to demolish several Islamic State underground bunkers and weapons caches. But this is the first time it has apparently been unleashed in an urban environment.

At least 300 people have been killed in the airstrikes over the past several days, flooding the Internet with photos of dead mothers buried under the rubble, frozen in place while making a final attempt to protect their children, and emergency rooms slick with the blood of the injured and the dead.

“The city is now a ghost city,” one resident of the city told CNN. “Usually I get used to the barrel bombs and I could sleep normally — but now I can’t — the new missiles are so loud and horrifying.”

At a U.N. Security Council meeting on Sunday called to discuss the carnage in Syria, multiple diplomats slammed Russia for its indiscriminate use of “bunker buster” bombs that are collapsing entire buildings on top of their occupants. “What Russia is sponsoring and doing is not counter terrorism, it is barbarism,” U.S. Ambassador to the U.N., Samantha Power, charged during the session.

Matthew Rycroft, the U.K. ambassador to the U.N., said the bombs “more suited to destroying military installations, are now destroying homes, decimating bomb shelters, crippling, maiming, killing dozens.” U.N. Special Envoy for Syria Staffan de Mistura added that he had seen videos and pictures of incendiary bombs “that create fireballs of such intensity that they light up the pitch darkness in eastern Aleppo, as though it was actually daylight.”

The re-deployment of the Su-25 signals another shift in the the push being made by Moscow and Damascus after the death of the cease-fire. The move indicates that Russian pilots will likely be more involved in striking small targets like rebel mortar positions, vehicles, and small groups of fighters in the Syrian countryside. 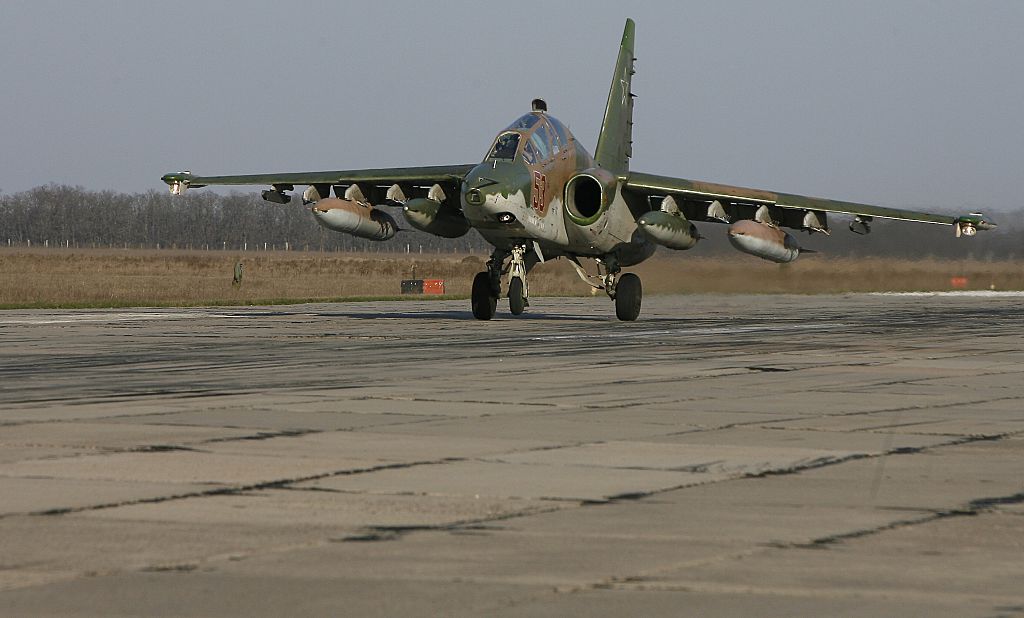 The plane, originally developed during the Cold War as a slow-flying reconnaissance aircraft capable of taking out NATO tanks and ground troops with rockets and its 30mm cannon, is far better suited to fighting in the hills of northern and western Syria than bombing cities.

It’s not clear is the deployed plane is one of the latest version of the Frogfoot, the Su-25SM3, which was set to enter operations by the end of this year. The upgrades include new jamming capabilities which disrupt everything from shoulder-launched missiles to infrared-guided missiles, according to Russian news reports. The new plane will also have sensors meant to allow it to track enemy ground forces up to several kilometers away, and to spot threats on the ground and transmit that data back to ground forces.

Get Ready for Closed Borders and Crashing Markets

The West Is About to Fail the Coronavirus Test

What Trump Really Doesn’t Get About Trade