Adapting to Beijing's dictates has allowed Hui Islam to survive. But true believers say it's losing its soul.

LINXIA — Driving through the Linxia Hui Autonomous Prefecture in Gansu province, in China’s northwest, minarets puncture the sky every few minutes. Many rise out of mosques that resemble Daoist temples, their details a blend of traditional Chinese and Islamic features: a bronze door knocker inscribed with the word “Allah” in Arabic, a crescent moon peeking above the pointed eaves of a tiled roof, and stone steles carved with hadith — a collection of sayings attributed to the Prophet Mohammed — in Chinese. This is the heartland of the Hui, a Chinese minority of about 10.5 million, distinguished from the majority Han ethnicity primarily by their Muslim identity.

China’s ruling Communist Party has long had a fraught relationship with religion, with harsh restrictions in regions like Xinjiang and Tibet, where religious identity is seen as a conduit to separatism. Chinese President Xi Jinping’s heightened sensitivity toward civil society and outside ideological influences, combined with the recent rise of global terrorism, has intensified government suspicion toward Muslims. Meanwhile, mainstream Han society, especially on the Chinese web, has grown increasingly vitriolic toward Muslims. Han chauvinism and ethnocentric nationalism are common in online forums, occasionally including Islamophobic warnings that the mosque will soon overshadow the Party.

Yet Islam appears to be thriving among the Hui. Hui Muslims make up the majority of the approximately 14,000 Chinese pilgrims who go on hajj to Mecca each year. China has built a sprawling Hui “culture park” in Ningxia, enshrining Hui Islam’s status as an exemplary form of Chinese religion. The loudest critics of the Hui are not state officials but reformists from within the Hui community, often returnees from religious study in the Middle East. They deride Hui Islam as facile and compromised, both because of its melding with Confucian and Daoist practices and because they believe that many of its practitioners have succumbed to materialism and corruption.

Ironically, Hui Islam’s flourishing depends precisely on the characteristics which locals say are also essentially Chinese: apolitical patriotism, adaptability, and more concern for material survival than rigid doctrine. Amid rising tides of ethnocentric nationalism, the Hui are preserving Islam in China by performing a specifically Chinese form of the religion. Their relatively peaceful coexistence with the state and the Party differs from China’s estimated 10 million Uighurs, a Turkic-speaking group who live mostly in China’s far western region of Xinjiang. (There are roughly 23 million Muslims in China.) As state-supported Han migration to Xinjiang increased over the last 10 years, tensions between Uighur and Han have exploded into violent ethnic clashes, as well as some Uighur militant attacks on civilians. The crackdown in response has spawned further violence and a stereotyping of Uighurs as separatists radicalized by foreign influence, in contrast to the Hui’s organic blend of Chinese and Islamic ways. 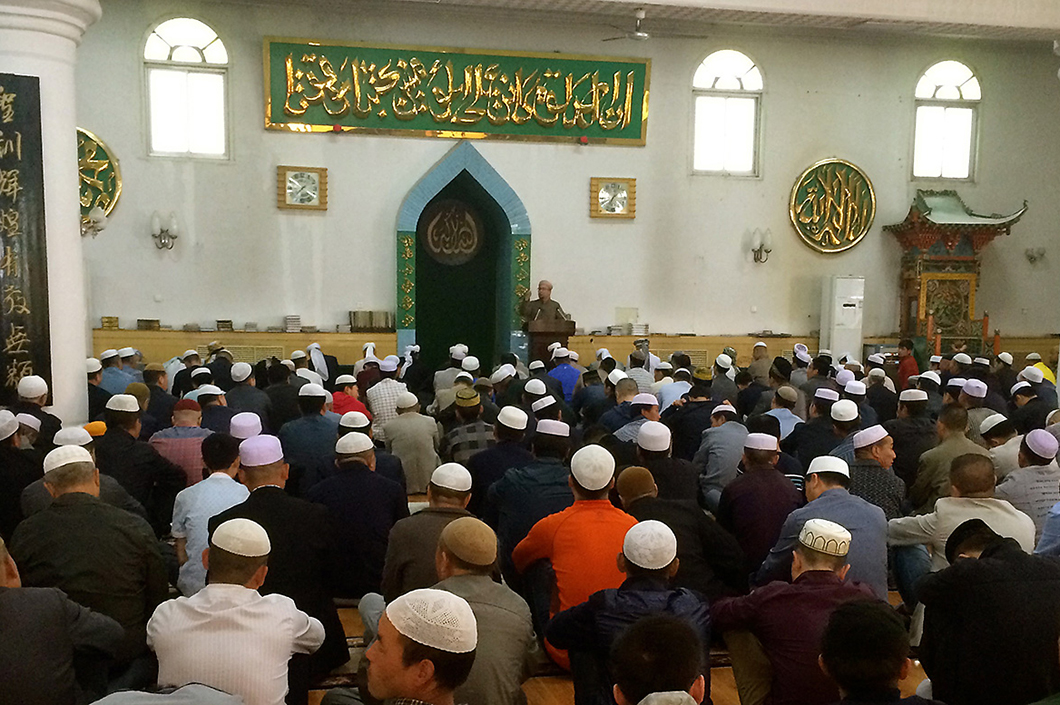 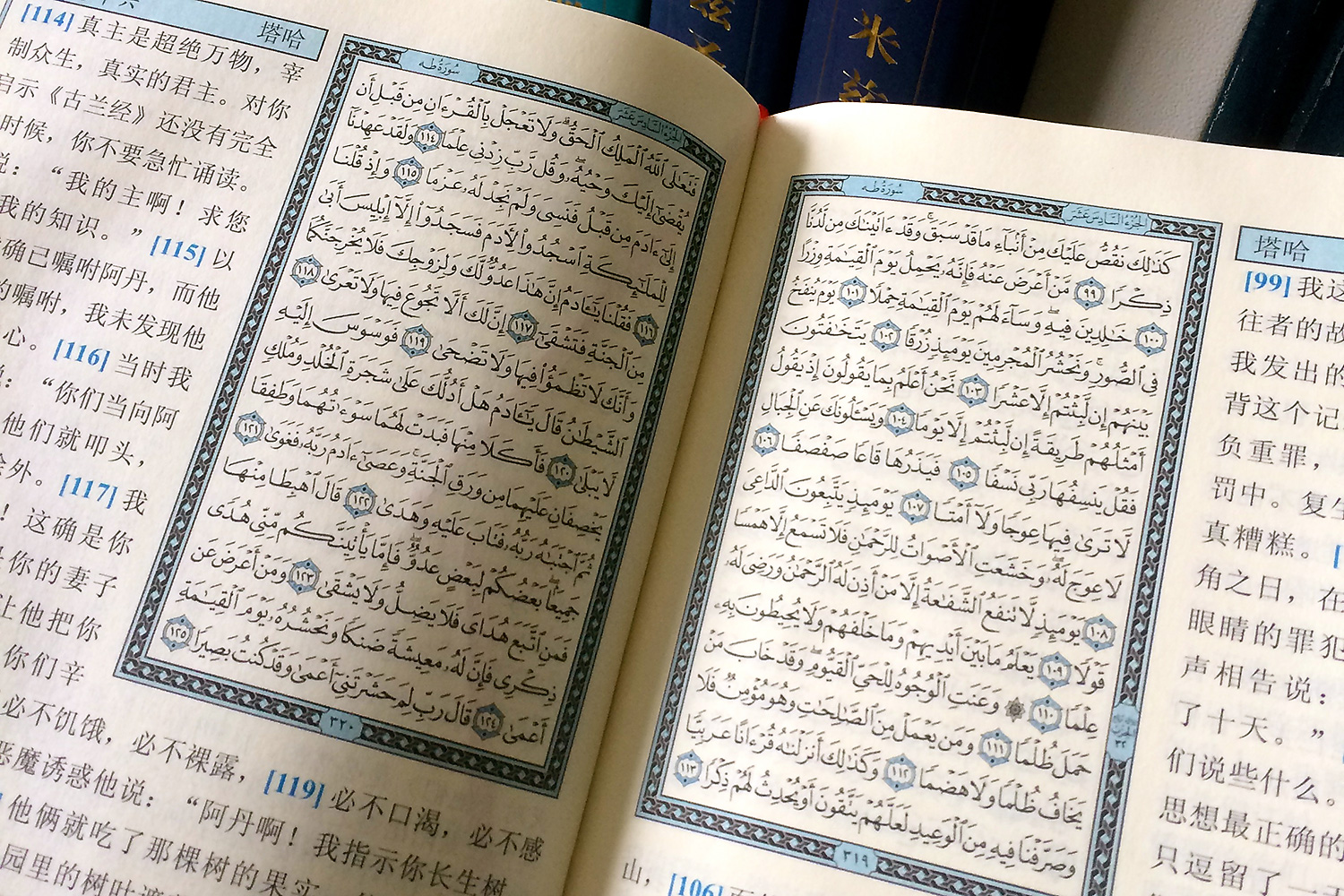 A bilingual Quran in the library of a mosque on the outskirts of Lanzhou, Gansu province. (ALICE SU for ChinaFile)

The Hui have manifested Islam with Chinese characteristics since the 7th century Tang Dynasty, when Arab and Central Asian traders immigrated, intermarried, and spread their religion along the ancient Silk Road. Their offspring eventually became a distinct ethnic minority, though most Hui are physically indistinguishable from Han Chinese. Throughout their history, some Hui actively tried to merge Islamic and Chinese culture. In the 18th century, for example, the Hui scholar Liu Zhi wrote the “Han Kitab,” a synthesis of Islam with Confucianism that identified Muhammad as a sage and linked Sharia law to Confucian rituals. He believed that the combined practice of the two would cultivate virtue and produce social harmony.

This blend of Chinese and Islamic tradition still shows in Hui mosques today. In the Linxua Hui Autonomous Prefecture, I met a moderator of Zhongmuwang, the “Chinese Muslim Net” web forum, who asked to go by his Arabic name, Hassan. He took me to visit several shrines built on the graves of Sufi saints. An eight-sided tower — corresponding to the bagua, or “eight symbols,” system of ancient Daoist cosmology — rose over one grave, decorated with Arabic calligraphy and a yin-yang symbol. Incense burned before the holy man’s shrine, and Hassan told me that some worshippers would kowtow in front of it. “Some people call this a distortion of Islam, but they don’t understand Chinese history,” Hassan said. “Religion here must adapt to survive.”

Those who find this adaptability a distortion are often Hui students who become enamored with Islam abroad. In 1995, the then-23-year-old Hui imam Ma Jun left his hometown of Lanzhou, Gansu’s capital, to study Sharia law and Arabic at the Islamic University of Madinah, Saudi Arabia. After five years, he came back bent on reform. “I was on fire when I came back from Saudi Arabia,” Ma said.

“I felt a strong responsibility. Chinese Muslims didn’t have enough belief. They were impure and too shallow.” And the 24-year-old Ma Xin, a Hui student who’d recently returned to Lanzhou after studying at Al-Azhar University in Cairo, Egypt, also derided Hui absorption of Chinese traditions. “My grandmother is a perfect example. She gives the Sufi elders money to pray for her, burns incense, and makes us drink ashes when we’re sick,” Ma said, referring to a Chinese folk practice of burning and drinking blessed paper to heal diseases. “I can’t accept this. It’s a twisting of Islam.” Ma Xin had rejected his family’s Sufi traditions in favor of Yihewani (or Ikhwan) Islam, a reformist sect founded in Gansu by Ma Wanfu, a late 19th century Chinese Muslim who similarly became determined to purify Chinese Islam after studying in Mecca. (Many Hui surnames are Sinicized forms of Muslim names in Arabic and Persian: “Ma,” for “Mohammad,” is especially common.)

Yet Beijing favors religion that displays political loyalty and cultural adaptation — as Hui leaders quickly learn. When Ma Jun returned to China, he set up two informal religious schools. In 2000, he established a private Arabic school in Guanghe, a mostly Hui town between Lanzhou and Linxia. And in 2008, he started giving religious lessons through a program for minorities at a public middle school in Lanzhou. Chinese law forbids teaching religious material in school, but Ma infused his language lessons with Islamic scripture and Saudi-style Salafi exegesis. By 2010, authorities had shut both programs down.

While China is an officially atheist state, the government allows for five official religions — Buddhism, Taoism, Catholicism, Christianity, and Islam — as long as they are practiced at state-approved sites, stay free of foreign influence, and do not proselytize. At the Central Religious Work Conference, a state-convened national conference to discuss religions in China in April, Xi stressed that religious groups should “merge [their] doctrines with Chinese culture” while keeping religion out of politics, government affairs, and education. The state thus allows some space for religious practice, however circumscribed, and those who learn to compromise can function within it. In 2010, Ma decided to work within the system. He dropped his private reform efforts and became an imam at Lanzhou’s Xinguan Mosque, a traditional mosque within Lanzhou’s Muslim quarter that adheres to orthodoxy of the Gedimu school, China’s oldest and most traditional form of Islam. He quickly rose in influence, leading some 3,000 Hui pilgrims from Gansu to Mecca in 2014, a process facilitated and approved by the semi-governmental Islamic Association of China. Encounters with the state had meanwhile softened Ma’s doctrinal views. “It’s hard enough just to exist as a Chinese Muslim,” Ma said. “The door is narrow. If someone walks through it, let us not say, ‘You’re not perfect, get out.’ We should take it slow.”

The disjuncture between religious devotion and the atheist Party doesn’t seem to bother most Hui leaders. “Chinese people are flexible. Some compromise is okay,” explained Ma Yinhua, the owner of Fengqiwu, a bookstore dedicated to minority studies in Lanzhou. “For now, ‘Love your country, love your religion’ is fine. ‘Love your Party’ might be a little much, but even Party members don’t necessarily love the Party.” Rhetorical mendacity is normal in China, he said. “Like our economic situation: it’s capitalism, but you can call it socialism. The state is lying to itself. So what if the people lie to the state? Everyone knows. It’s not a big deal.” 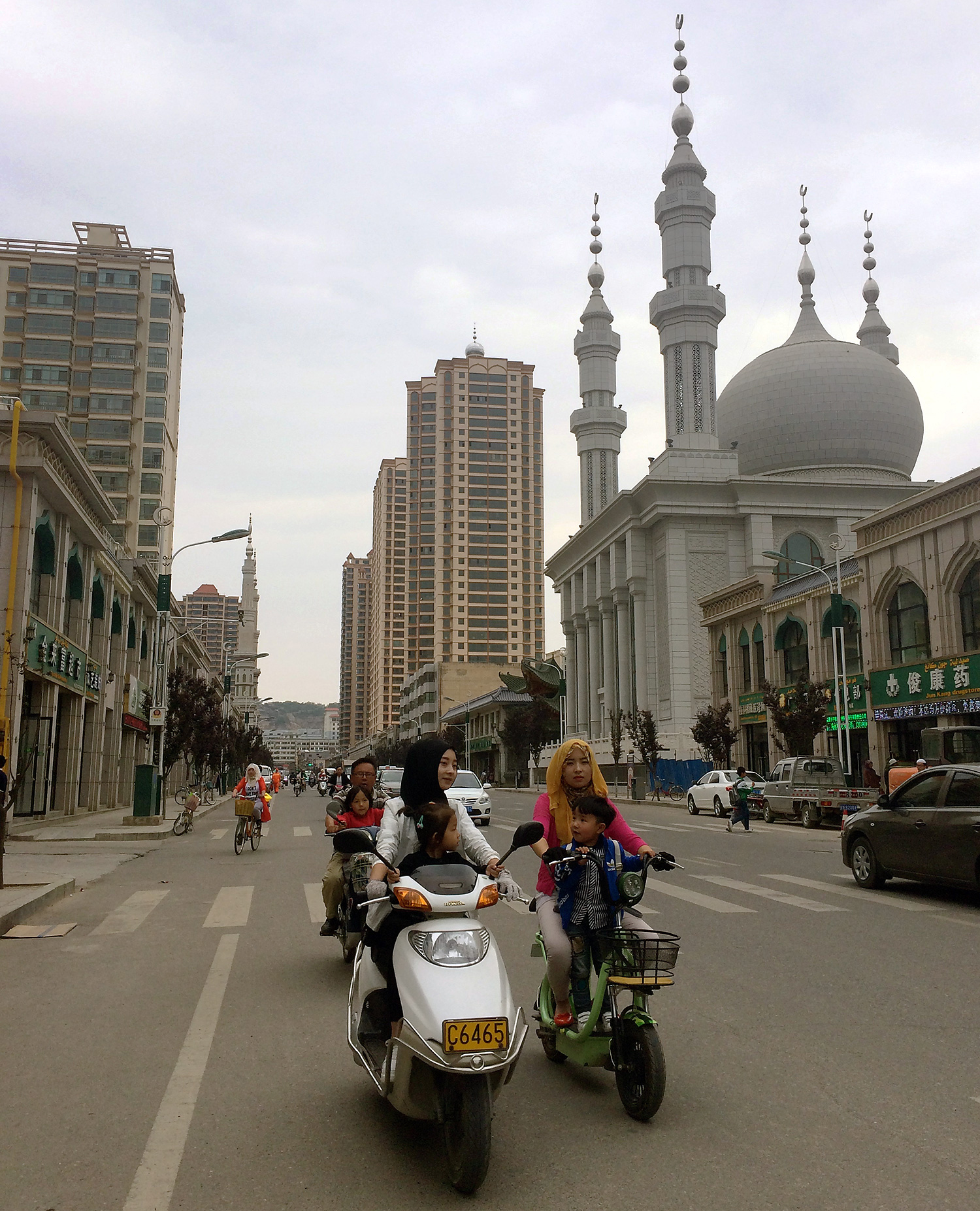 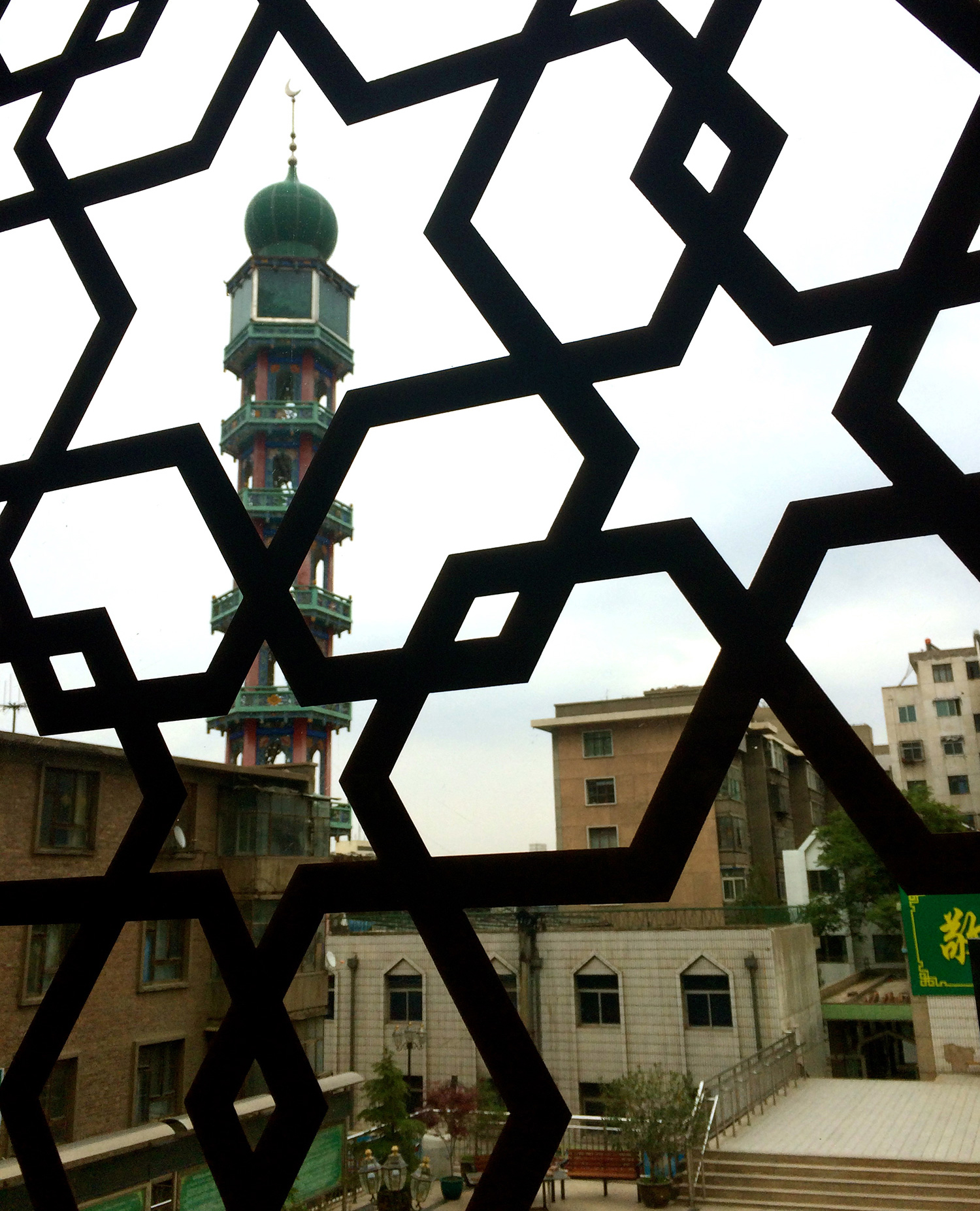 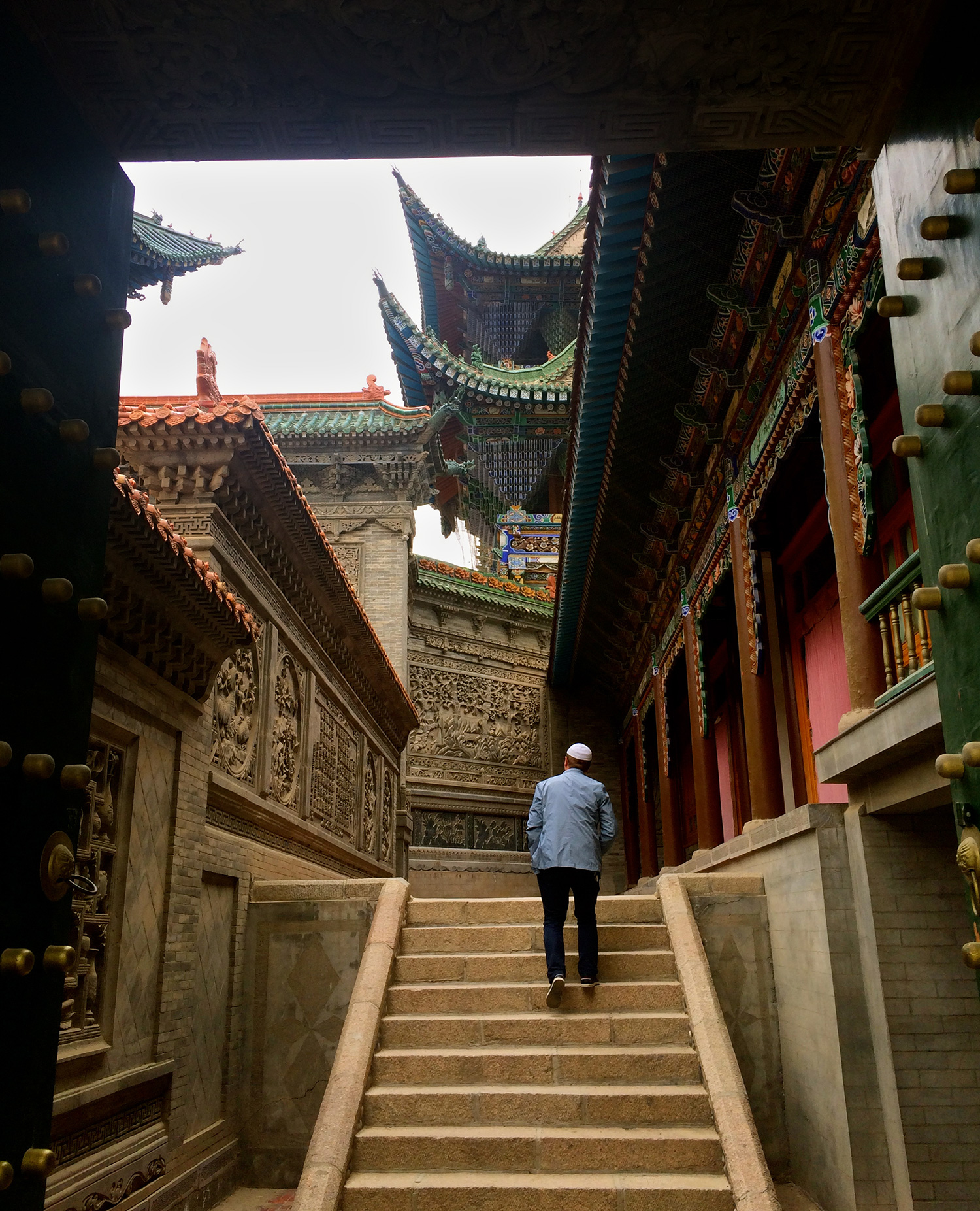 The Chinese-style minaret of a Gedimu mosque is seen through an Arabic-style latticed window in Lanzhou, Gansu. (ALICE SU for ChinaFile)

A Hui man walks into one of the largest Sufi mosques in Lanzhou. (ALICE SU for ChinaFile)

Compromise and corruption are complements to shallow faith, Imam Ma explained, and the reason why Hui Muslims are not a threat, however devout they may seem. “Religion has been marginalized in China. Everyone is focused on money. We are much more likely to go toward corruption and politicization than extremism,” Ma said, adding that he rarely goes to meetings with the national organization the Islamic Association of China any more, because no one there wants to talk about theology. “The imams are just asking, ‘Is your iPhone 6 or 6S? What kind of car are you driving?’” Like most Chinese people, Hui are far more concerned with the material present than the afterlife, Ma said. “Nobody would give up their life for religious struggle or sacrifice.”

Back in Lanzhou, a Muslim who called himself Abdelhalim and whose family owns the successful halal lamb restaurant chain Zhonghua Shouzhua King showed me their recently opened private mosque, madrassa, and Islamic nursing home for the elderly. Authorities hadn’t obstructed the family opening any of these, he said. “The minority religious policies are good. The government is trying to preserve ethnic unity, not to disturb the minorities,” Abdelhalim said. “Even when some sects are doing really bad things, the government doesn’t push them.” Sometimes religious figures resist government attempts to confiscate land by claiming property as part of the mosque’s endowment, for example, Abdelhalim said. Even though the mosque leaders might be lying, officials usually complied. The Islamic Association also often treated religious leaders to state-funded tours and trips to other provinces. When I asked whether that was corruption, Abdelhalim laughed. “Corruption is good for the government! Give us a visible enemy and we’ll all unite to fight for our religion and identity,” he said. “Give us an invisible enemy — lust, money, selfishness — and we’re defeated.”

In Linxia, Hassan agreed that in Hui Islam, as in contemporary Chinese society, outward appearances do not always reflect inner belief. “There are thousands of mosques in Linxia, but this is a bad thing,” he told me as we drove by towering Gedimu, Salafi, Yihewani, and Sufi structures, women in hijabs passing us on their motorcycles. The proliferation of mosques and shrines only reflected disunity and sectarianism, Hassan said. “People say this is religious extremism? I think it’s secularization.” He continued, “Only very secular people think that building more mosques is a true expression of faith.” Outsiders might think there is a clash between the minarets and Chinese flags of China’s Hui-populated areas, he noted, but that’s because they are only looking at the surface.

Reporting for this article was supported by the Pulitzer Center.

Alice Su is a journalist currently based between Beijing and Tehran. Her work focuses on refugees, religion, China, and the Middle East. (@aliceysu)