‘Please Not the Horror-Clown!’: How the Foreign Press Is Covering Election Day

The foreign press is covering Election Day like the end of days.

If you’re in the United States watching Election Day with a knot in your stomach, you’re not alone. International media has covered the 2016 campaign wall-to-wall and with a sense of total disbelief over Donald Trump’s relentless rise. With Election Day upon us, the foreign press is covering it like the end days.

In Germany, the Bonn Express pleaded with Americans not to choose the horror-clown:

The German press weighs in: "Please not the Horror Clown!" #Germany #ElectionDay pic.twitter.com/W6VIowI8i0

There’s something about the German language that really lends itself to describing the end-times. When the Neue Vorarlberger Tageszeitung declared Tuesday as “Die Nacht, die unsere Zukunft entscheidet,” it just has a nicer ring to it than its English equivalent: “The night that decides our future.” 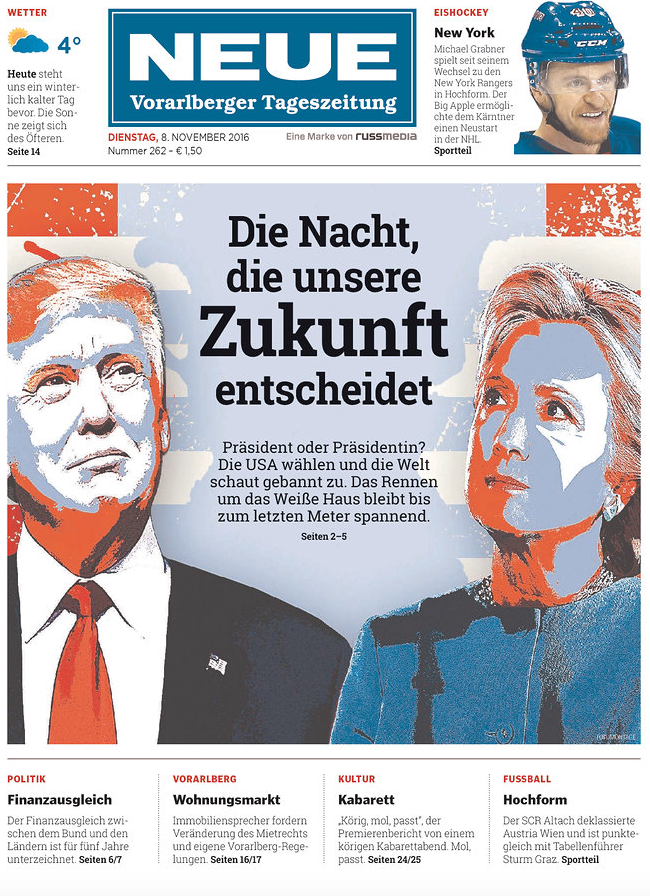 Swedish tabloid Expressen, meanwhile, comes through with this awful photoshop and asks: “The American nightmare … or the first woman?” 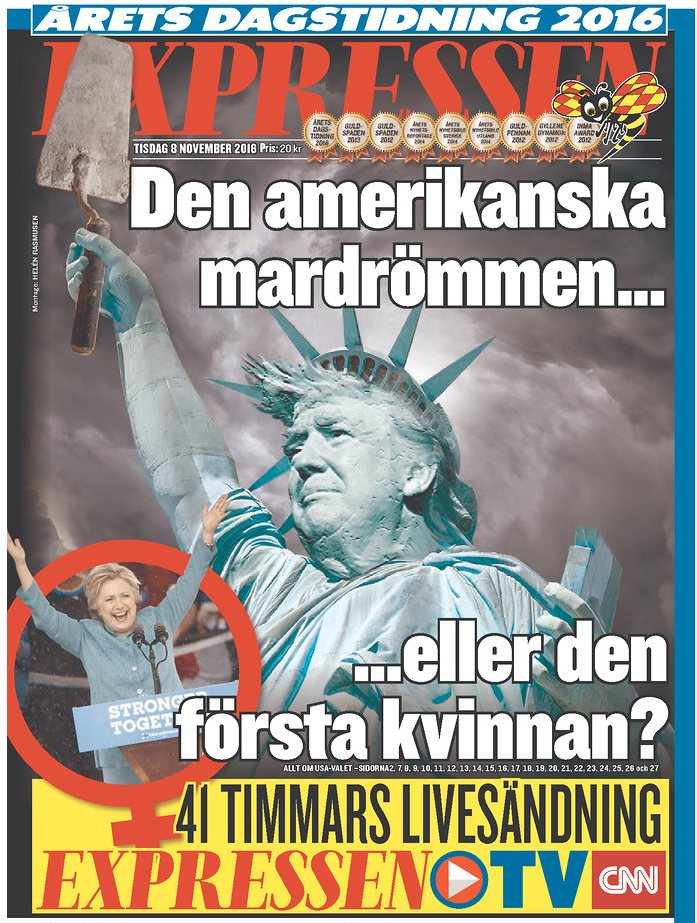 In Jamaica, the Daily Observer casts Clinton and Trump as a Revolutionary War-era soldiers: 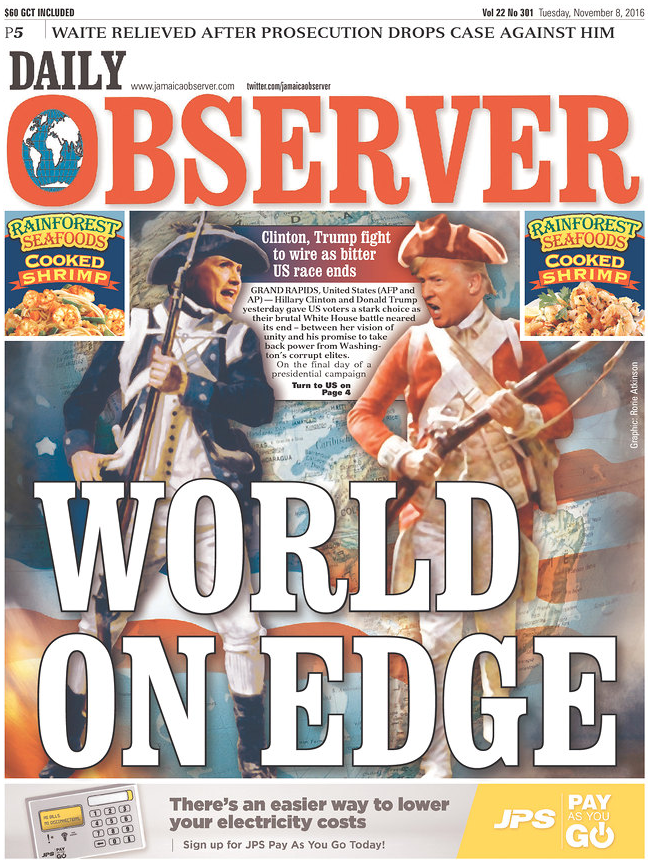 And as Brazil’s Diário Catarinense sees it, nothing less than the fate of the world hangs in the balance: 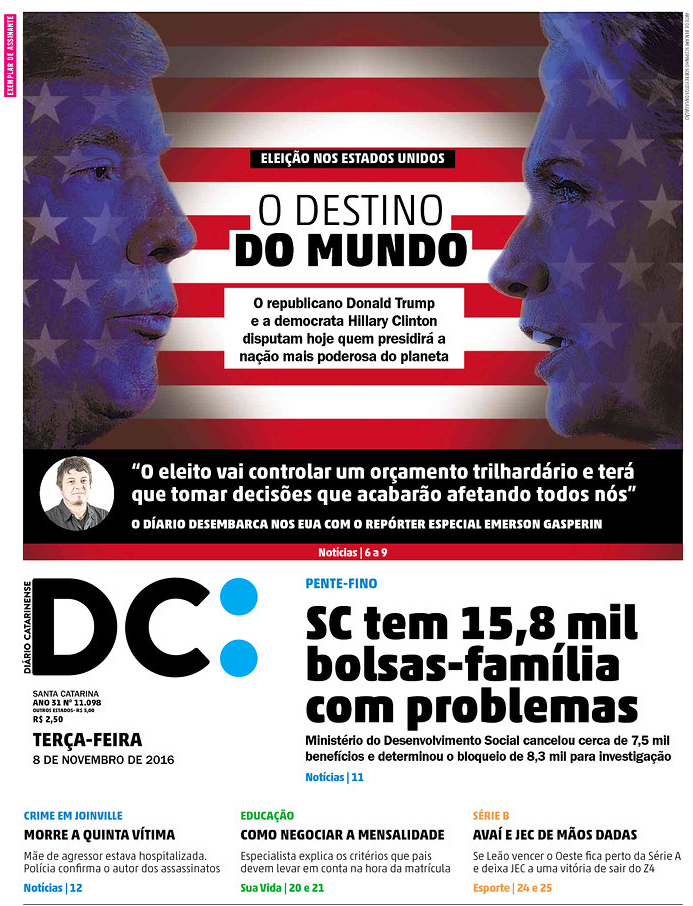 But for the all the Sturm und Drang in the foreign press, it doesn’t hold a candle to the paranoia and conspiracy theories that have marked the Russian media’s coverage of the 2016 campaign.

And Election Day was no different. As the BBC’s Steve Rosenberg reports from Moscow, Tuesday’s papers include a report that Hillary Clinton will surround Russia with nuclear weapons, among other gloomy predictions.

One Russian paper today claims "Clinton will surround us with nuclear rockets". What Russia's press is saying as Americans go to the polls. pic.twitter.com/AcFjcN3OlL

According to Robinson, Tuesday’s papers include a report from Komsomolskaya Pravda, which is close to the Kremlin, claiming that the U.S. president isn’t chosen by popular vote but is appointed by a shadowy council calling itself “the irreplaceables.”

Amid repeated claims from Trump that the election is rigged against him, Russian news website Gazeta.ru passed along to its readers the number to the GOP nominee’s voter-fraud hotline. To reach the U.S. number, the outlet helpfully reminded its Russian readers, they have to first dial “1”:

On Sunday, Dmitry Kiselyov, the television presenter slapped with EU sanctions for his propaganda activities, used his Sunday television show to rail against the U.S. election. Some 1.8 million “dead souls” will be used to boost vote totals, he claimed, in a likely allusion to the Gogol masterpiece by the same name. “This has been the dirtiest campaign in the history of the United States,” Kiselyov said.

In its propaganda efforts around the 2016 election, the Kremlin has sought to discredit American democracy. Convinced that the United States is attempting to foment a popular uprising against him in an attempt to install a Western-style democracy, Russian President Vladimir Putin has used this election system to cast doubt on the integrity of the American political system, as is reflected in the efforts of his propagandists.

Or as RT editor in chief Margarita Simonyan put it: