Clawing Into Mosul, Block by Block

With the Islamic State dug in on the western bank of the Tigris, the Iraqi Army braces for the bloodiest phase of the fight.

ALI RASH, Iraq — Abdullah Hardi thought of his family, his destiny, and Iraq’s future as the truck carrying him to the frontlines bounced along dirt roads toward Mosul on Sunday. On Nov. 9, after a week of home leave, Hardi, a soldier in the Iraqi Army’s 9th Division, was on his way to rejoin the effort to wrest the city’s eastern districts from the Islamic State.

It would be his first time in Iraq’s second-largest city, which has been held by the extremist group since June 2014. “I don’t know what my fate will be, but I came here of my own free will,” the 33-year-old said.

There was none of the bellicose posturing evident in his comrades back at base, nor did he insist — as many Iraqi officials have — that the result of the battle was a foregone conclusion. Since the operation to retake Mosul began on Oct. 17, Iraqi and Kurdish forces have retaken a score of villages on the Nineveh Plains and have now entered the eastern suburbs of the city. Recent reports indicate that Iraqi forces advancing from the south are still at least 10 miles from the city.

“When I left home … I didn’t tell my children what I was doing because I didn’t want them to worry,” Hardi said. “But this is history being written now and when my son grows up I will tell him the part I played.”

The 9th Division gained a foothold in Mosul’s eastern district of Intisar on Nov. 3, making it the first army unit in the city after elite counterterrorism forces breached the outer neighborhoods last week. Officers say the military operation is progressing ahead of schedule, but political pressure to achieve a quick victory contributed to Iraqi forces advancing in the city without fully clearing areas, leaving them increasingly vulnerable to counterattack.

After facing brutal street fighting against a suicidal enemy, some soldiers admit privately that Islamic State resistance is heavier than they were led to expect. At the 9th Division’s rear base in Qaraqosh, 10 miles from Mosul, one soldier, Mohamed Hamudi, played a video on his phone of the fighting a week earlier to retake the historically Christian town.

“We saw two fighters running away, so we followed them,” he said, handing over the phone. 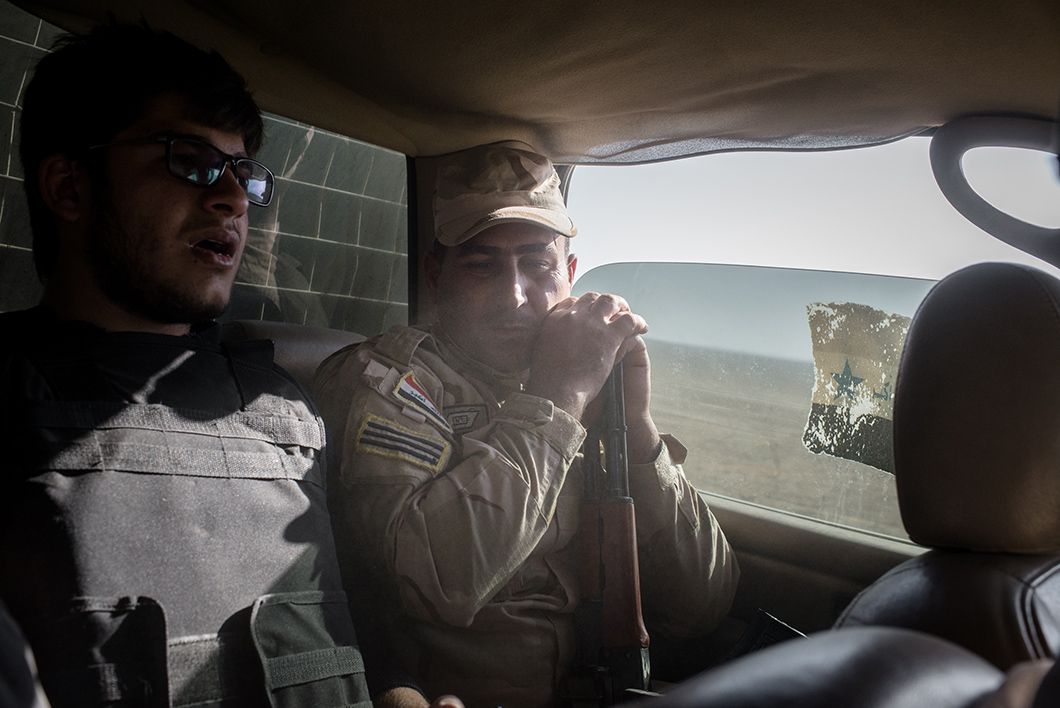 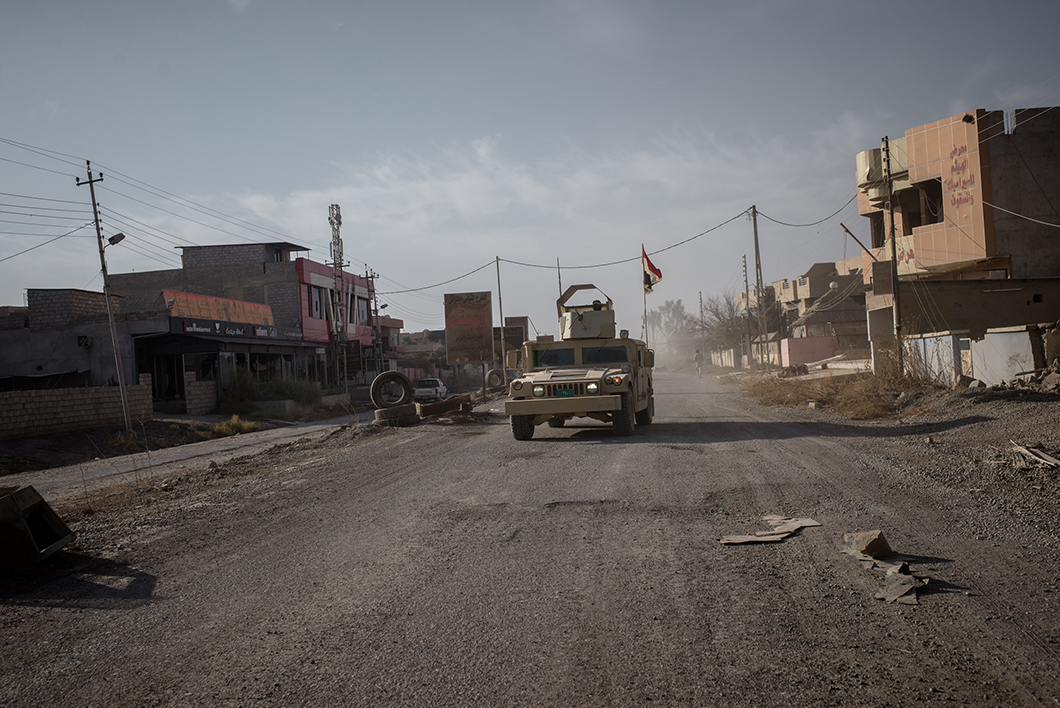 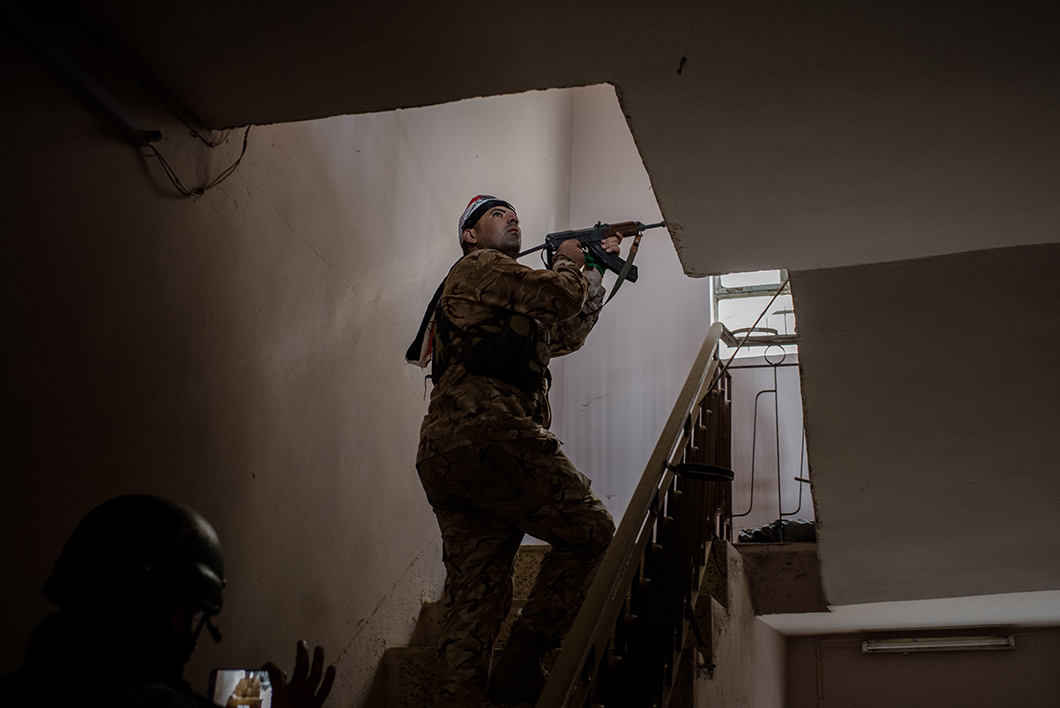 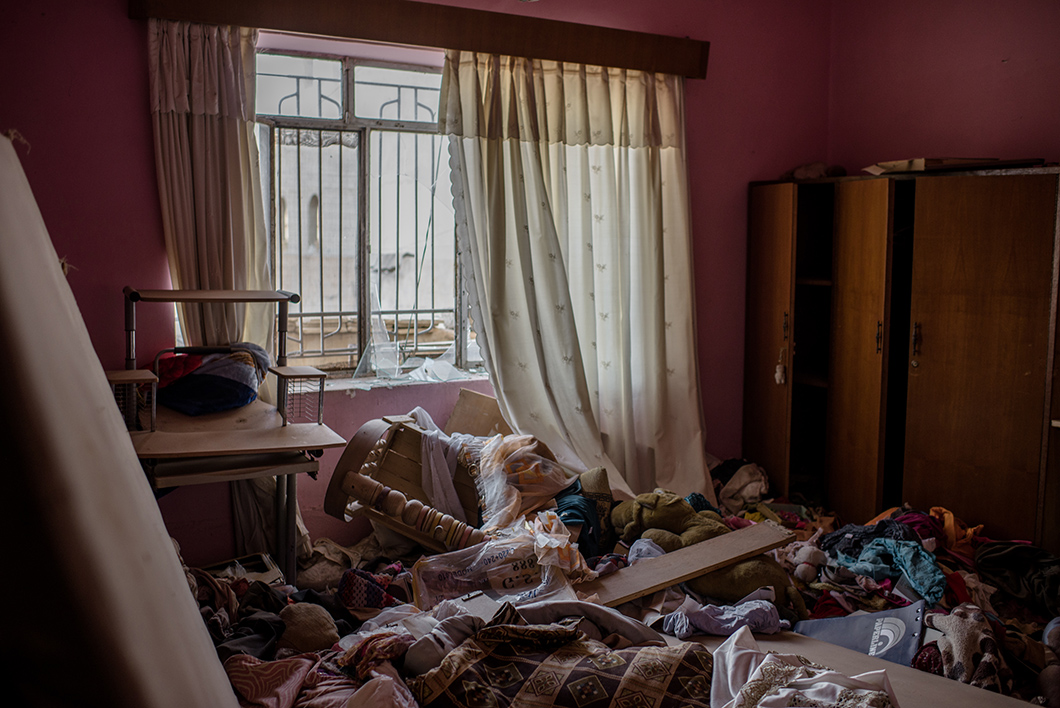 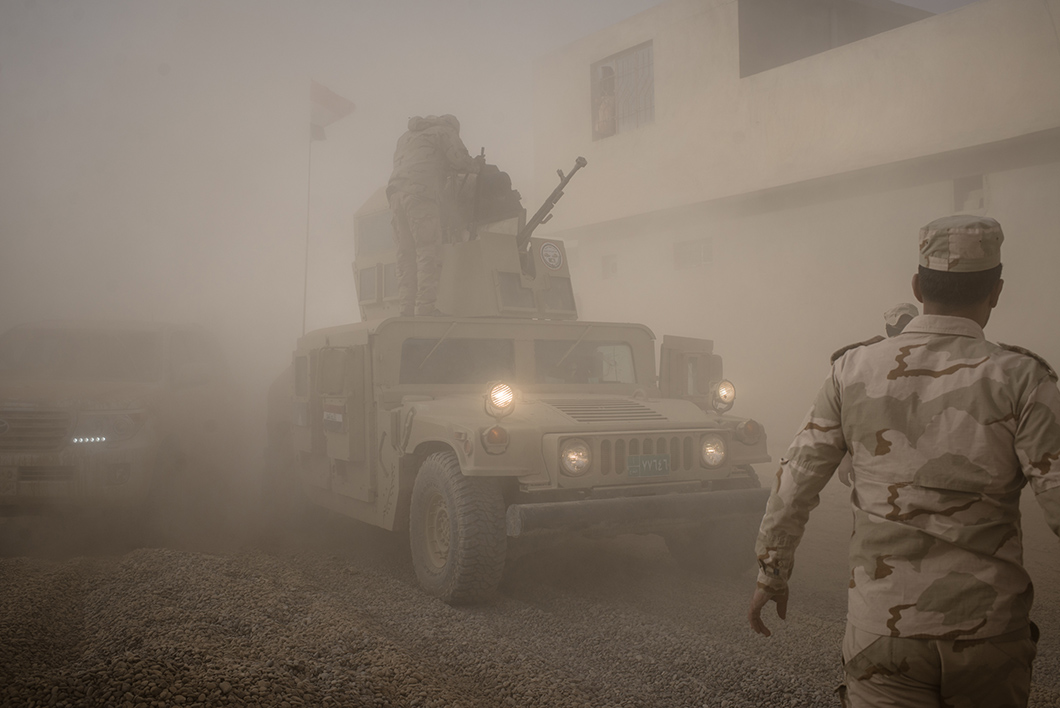 Abdullah Hardi, a 33-year old soldier with the Iraqi Army’s 9th Division, heads into Mosul after a week-long leave.

An Iraqi Army Humvee drives through the town of Hamdaniya on its way back from the frontlines on the outskirts of Mosul.

Jameel, a fighter with the Nineveh Plain Protection Units, a militia predominantly consisting of Assyrian Christians, clears a house from the Islamic State in the city of Bakhdida.

The interior of a ransacked house in the city of Bakhdida, on October 30.

Soldiers in the Iraqi Army’s 9th division try to flag down a convoy after their vehicle broke down while trying to reach the frontline on the outskirts of Mosul.

Shaky footage showed soldiers moving through empty streets. Then there’s the sound of an enormous explosion erupting, followed by a huge dust cloud — the product of an Islamic State car bomb. Afterward, a soldier emerged from the scene carrying a comrade who had lost a leg.

“Even with a tourniquet we couldn’t stop the bleeding, and he died,” Hamudi said. “The ISIS fighters weren’t running away; they were leading us into their trap.”

The fighting last month to retake Qaraqosh and other towns around Mosul occurred on terrain that largely favored the Iraqi Army and Kurdish Peshmerga. On the open Nineveh Plains, suicide bombers were often visible a mile away, and depopulated villages made calling in coalition air support relatively straightforward. Even so, the Islamic State’s defense of the area offered the soldiers alarming clues about the resistance awaiting them in Mosul: Piles of completed improvised explosive devices (IEDs), homemade rockets, and precursor materials strewn across the jihadi group’s workshops were capable of near-industrial scale production of munitions. Networks of trenches and warrens of tunnels also allowed fighters to maneuver unseen, and garages concealed suicide vehicles until the moment Iraqi forces approached.

As these forces push farther into Mosul, Islamic State fighters are gaining several strategic advantages. The urban environment favors their preferred tactics of hit-and-run attacks, suicide bombings, and use of snipers. And the presence of civilians in densely populated neighborhoods is making the Iraqi Army’s job very difficult. The use of heavy weapons poses a severe risk to innocents who stay in their homes, while escaping civilians risk being shot in the crossfire. Already, hundreds of civilians are believed to have been killed.

“Daesh is trying to draw us into the city,” said Brig. Gen. Yahya Rasoul, using an Arabic term for the Islamic State. “The presence of civilians and the urban environment suits their strategy.”

Rasoul, the spokesman for the Joint Military Command, which coordinates among the Iraqi Army, Kurdish Peshmerga, and international coalition, was eager to emphasize the importance of protecting civilian life.

“Daesh want to be able to tell the people that the army is killing them,” he said. “For this reason, our use of airstrikes in Mosul has been very restricted. Each one has to be confirmed by a general.”

Despite these precautions, the coalition has struck more targets in and around Mosul than any other location in Iraq. In the operation’s first week alone, it launched 1,776 bombs, artillery rounds, and rockets at targets around Mosul. These strikes have come with a human cost: Chris Woods, the director of the Britain-based organization Airwars, said his organization has tracked 35 separate alleged incidents involving civilian casualties from the Mosul operation, with a fatality range of 84 to 87 deaths. 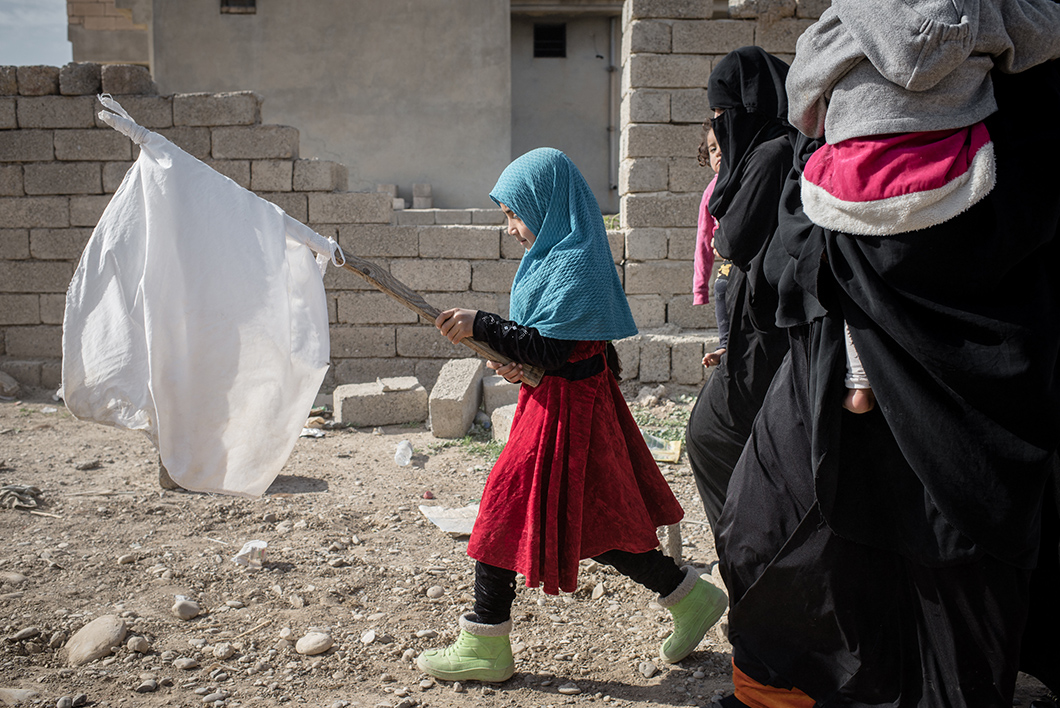 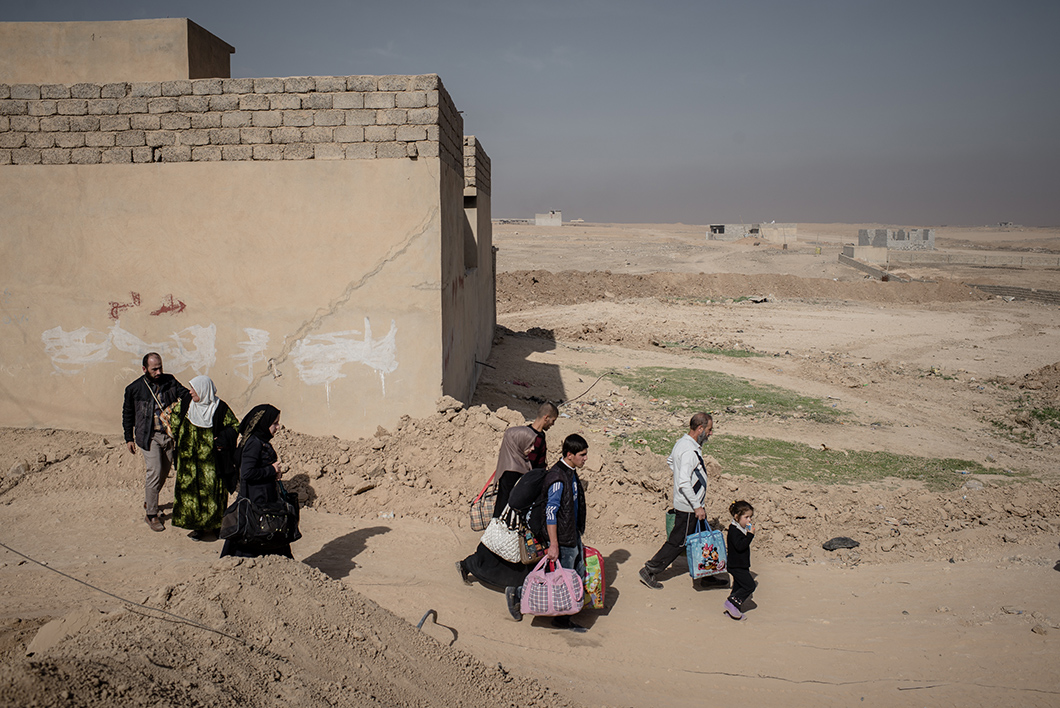 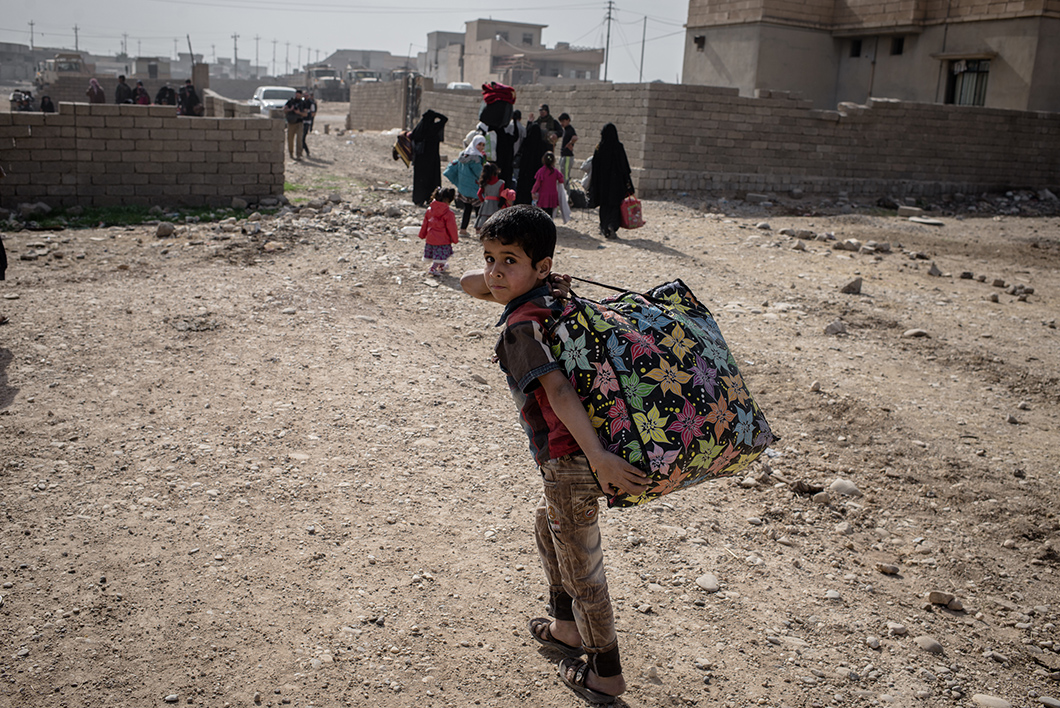 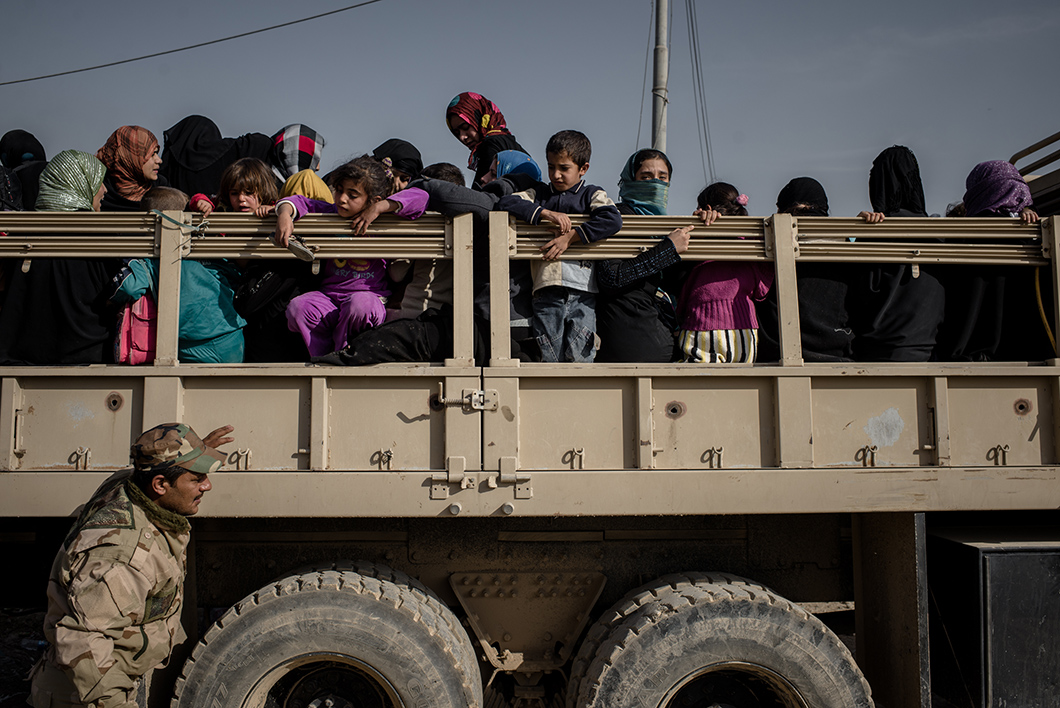 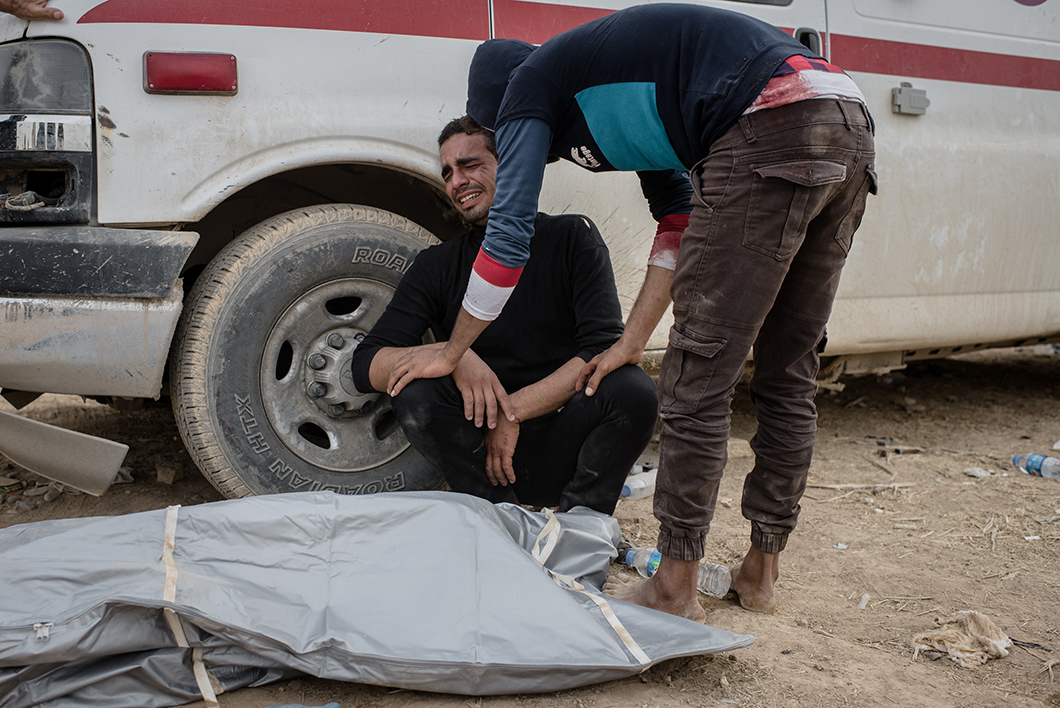 Newly displaced civilians fleeing the conflict between the Iraqi army and the Islamic State arrive in the village of Gogjali, east of Mosul, on Nov. 4.

Gogjali was the nearest liberated area for civilians fleeing the violence in Mosul, as Iraqi security forces tried to wrest the city from the Islamic State’s grip.

A child looks back as he flees to Gogjali on Nov. 4.

Once displaced civilians exit Islamic State-held territory, they are loaded onto a trucks and transported to an IDP camp on the northern edge of Gogjali.

The brother of Matham Tarek, a 15-year old boy killed in a mortar attack, cries over his body at a field clinic in Gogjali.

Since the beginning of military operations on Oct. 17, more than 72,000 people have been displaced from in and around Mosul, the United Nations says, a figure that is increasing rapidly as Iraqi forces push deeper into the city. More than 10,000 people have arrived at the newly constructed Hasansham Camp, 20 miles east of Mosul. Since opening on Nov. 4, the camp has been the scene of tearful reunions between the fleeing civilians and family members who have been living in exile in Iraq’s Kurdistan region.

Medics working near the frontlines say they have treated hundreds of civilians injured in the crossfire. Lise Grande, the U.N. humanitarian chief for Iraq, registered her alarm on Nov. 6, saying she was “deeply disturbed” by reports of civilian casualties.

Senior Iraqi officers have adopted a more optimistic line than some of the men on the frontlines. At the 9th Division base in Qaraqosh, Gen. Sharker Qasim Mohsem, the chief of staff, has followed his soldiers’ progress through radioed updates from the front. “There has been no heavy resistance,” Mohsem insisted Sunday, with the worst threat coming from a half dozen suicide vehicle bombings over the past few days.

Casualties so far have been light, he said, “thanks to God and our armored vehicles.” But if many vehicles were disabled, this could slow their advance. “We only have a few spare Humvees,” he said.

His men have taken control of about 80 percent of the Intisar district on Mosul’s eastern outskirts, he said, killing about 100 Islamic State fighters. Elsewhere in Mosul, Iraqi officials estimate that there may still be up to 5,000 fighters. “We’ve broken through their main line of defense, and there’s not more than a dozen fighters still in Intisar,” Mohsen said.

But even these few remnants have halted the 9th Division’s advance. They now must painstakingly clear the neighborhood house by house before they can advance further. So far, Mohsen said, the soldiers are yet to discover Islamic State tunnels or hidden IEDs, suggesting the real fighting may lie ahead. As he spoke his hand-held radio crackled to life, with one of his officers reporting that another street had been cleared.

Rasoul said the worst is yet to come for the Iraqi forces. There’s intelligence to suggest that the Islamic State may be preparing to make its last stand in Mosul’s west bank, on the other side of the Tigris River. In the narrow streets of its old town, armored vehicles will struggle to operate, and its more conservative population may be more likely to support the jihadi group. “In the next few days we will liberate and control the left bank of Mosul,” Rasoul predicted. “But the heart and core of ISIS in Mosul is on the right bank.”

But for all the Iraqi soldiers’ passion to defeat the Islamic State, the equipment at their disposal could mean that they are in for a long and painful battle. It was midafternoon by the time Hardi’s unarmored vehicle stopped at a hamlet five miles from Qaraqosh. It was still another five miles to Mosul, but they needed an armored convoy to take them into the city. After a few minutes, they received some bad news over the radio: There were no armored vehicles available to take them into the city.

The voice on the radio instructed the soldiers to return to base in Qaraqosh. The driver turned the key, but their truck wouldn’t start. He got out to look under the hood, trying to determine the cause of the breakdown. The soldiers, who were standing around smoking, started looking throughout the hamlet for other vehicles returning from the front to drive them back.

If Hardi was relieved by the reprieve, he didn’t show it. As he put it: “Driving Daesh from Mosul is a duty on all of us.”