Don’t blame low working-class wages or the financial crisis for the populist wave that produced Trump and Brexit. The data show the tide started decades ago.

The votes for Brexit in the United Kingdom and for Donald Trump in the United States have confounded foreign-policy commentators the world over. How could the world’s two great Anglo-Saxon democracies, for centuries the leaders and advocates of a global, rules-based international trade regime, now be leading a path toward isolationism and mercantilism?

In the aftermath of a shock, we tend to rationalize that it is a result of contingent factors, the absence of which would leave the world as we imagined it to be. Perhaps the relationship between Britain and the European Union was always contentious. Perhaps the aftermath of the 2008 financial crisis left an unusually large pool of underemployed working-class voters, seeking to lash out against the establishment. A few years sooner, a few years later, and it would all be different.

Yet public opinion data proves the earthquakes of Brexit and Trump are not simply the result of chance or bad timing. Instead, they are the outcome of deepening fissures in the long-running project of globalization. Over several decades, that project has produced significant shifts in public opinion around the world, including ascendant national pride, antipathy to migrants, and growing skepticism about the legitimacy and effectiveness of international institutions. Those were tremors warning of a revolt against globalization. It is a revolt that has already defined politics in countries as far apart as Russia, Venezuela, and the Philippines, and it has now reached the established democracies of the West in the form of Brexit and Trump.

The resilience of national identity

First, one of the paradoxes of globalization has been that, as cross-border travel, migration, and trade have increased, attachment to national identity has not weakened, but instead grown stronger. Since 1981 the European and World Values Surveys have asked respondents whether they feel “very proud,” “quite proud,” “not very proud,” or “not at all proud” of their national identity (see chart below). That recent decades have seen an upsurge in national attachment in authoritarian regimes such as Russia or China is unsurprising, yet less noted is a return of national pride in societies that were once thought of “post-national,” such as Germany, Sweden, and the Netherlands. This surge in national pride has been concurrent with the growth of “new right” political parties, such as the Sweden Democrats (SD), the Alternative for Germany (AfD), and the Party for Freedom (PVV) in the Netherlands.

National pride need not take the form of chauvinism or nationalism, and yet, these remain its inherent risks. Pride entails a need for recognition, and a feeling that one’s achievements or way of life are worthy of special value, promotion, and protection. A proud public is easier for political elites to manipulate by instrumentalizing external conflicts, or blaming scapegoats within: “take back control,” and “restore our country” are the universal slogans of populist parties and movements. 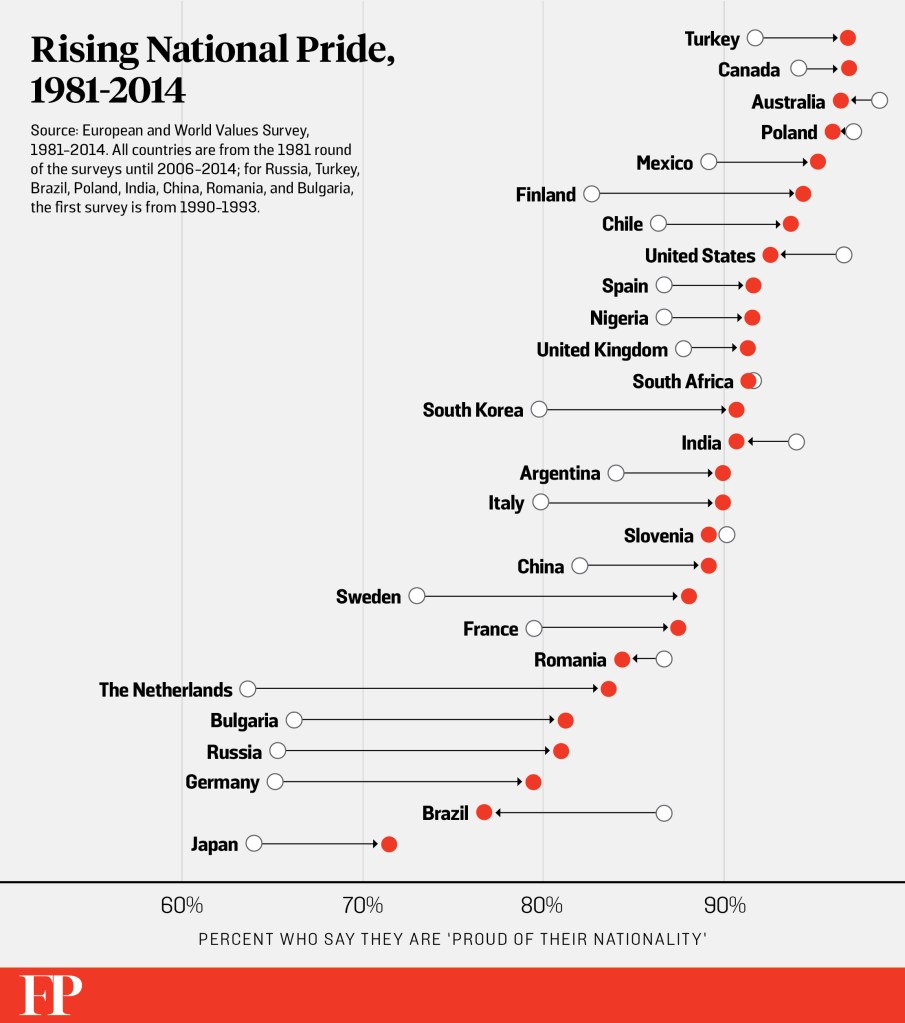 Second, as scholars such as Ronald Inglehart and Christian Welzel have documented, over the past thirty years, Western societies have become more tolerant in a remarkable variety of ways, including toward homosexual marriage, abortion, divorce, and the use of soft drugs. And yet, while such “lifestyle tolerance” has risen markedly across Western countries, “identity tolerance” — tolerance of peoples with different ethnic or religious backgrounds — has moved in the opposite direction. In particular, hostile sentiment towards immigrants has increased steadily decade by decade since the 1980s. 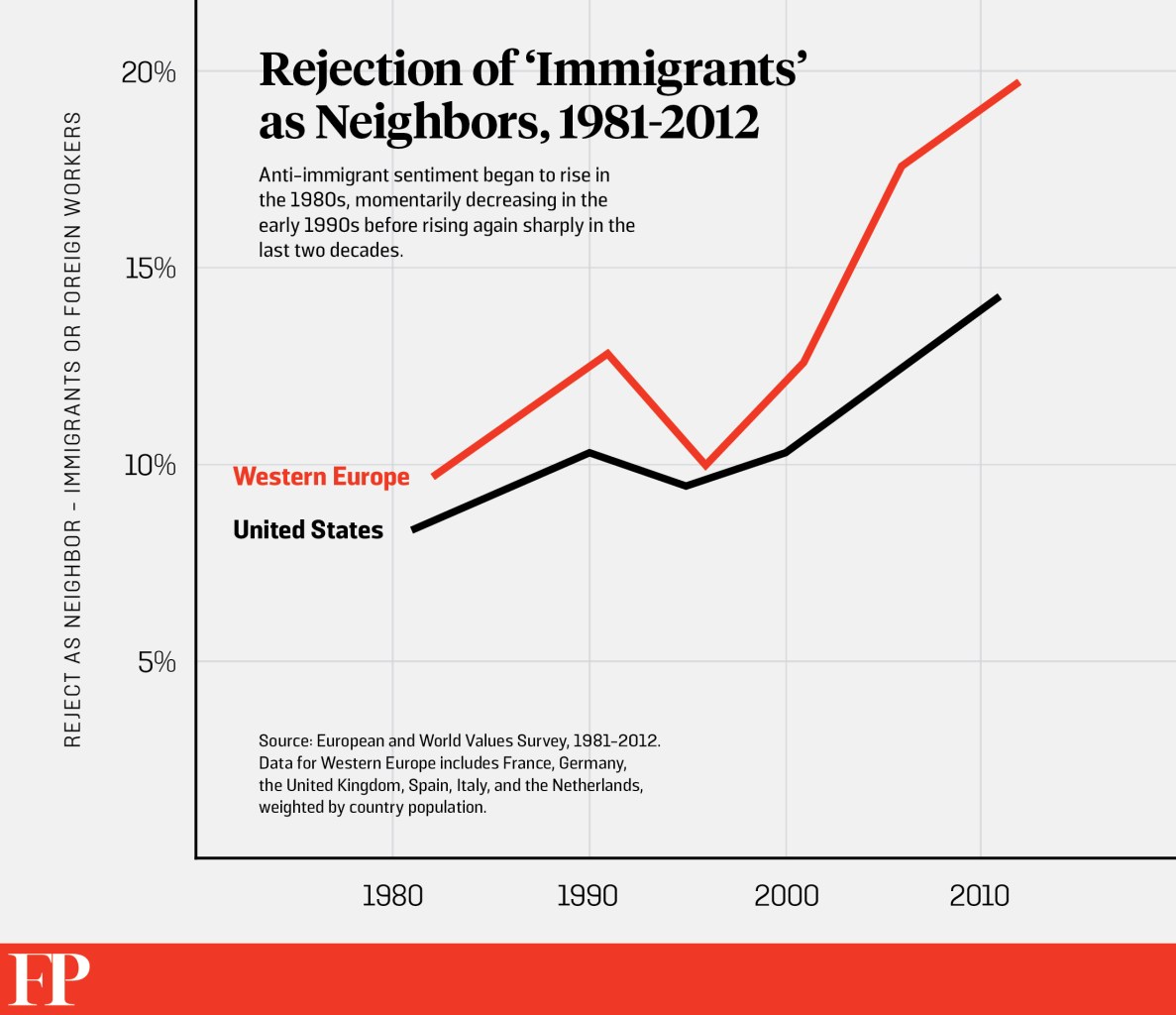 The conjunction of rising lifestyle tolerance with growing intolerance of migrants may appear, at first, contradictory: Should tolerance not extend to all groups and minorities? Yet it has opened the space for a socially libertarian platform within the radical right, defining itself as the defender of a “national way of life” against newcomers who do not share the West’s liberal values. Pim Fortuyn, the openly homosexual Dutch politician who combined a flamboyant social liberalism with unabashed Islamophobia, was the first far-right politician to occupy this ideological space. Yet the same rhetorical strategy has become a cornerstone of Geert Wilders’s PVV in the Netherlands, of Israeli secular nationalists, of the big-tent National Front (FN) of Marine Le Pen, and Donald Trump’s libertarian supporters, such as Breitbart journalist Milo Yiannopoulos. If the true clash of civilizations between Islam and the West, as Ronald Inglehart and Pippa Norris suggested in these pages, is over social liberties, then the globalization of media and peoples has turned this clash from an international to a domestic one, and one that is reshaping the party systems of major Western democracies. That may be one reason why Western political systems are now following the precedent set by Israel in the early 2000s, in which the collapse of the cosmopolitan center-left in the form of the Labor Party ceded place to a resurgent secular ethnic nationalism led by Likud, Kadima, and Yisrael Beiteinu.

Loss of faith in international institutions 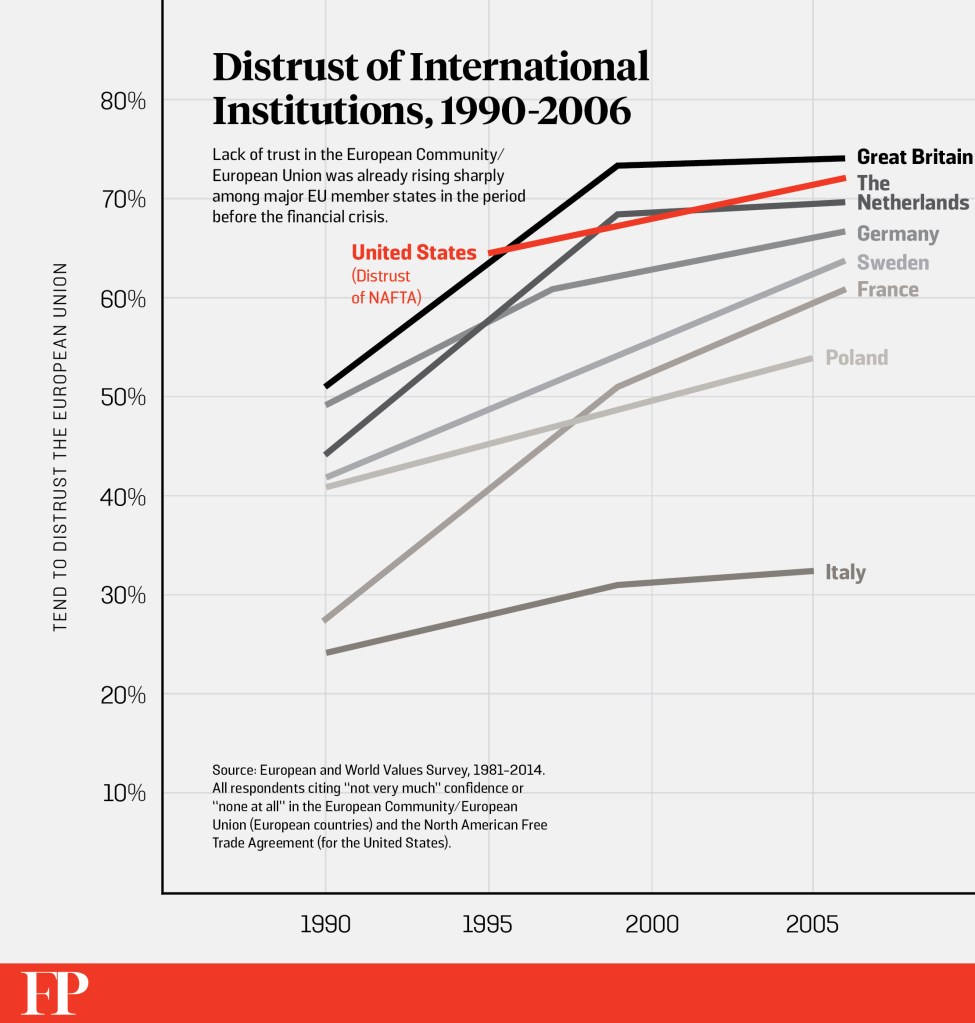 Already in the 1990s, skepticism about the European Union was growing among the publics of major EU member states. While the launch of the euro and the founding of the European Constitutional Convention at the start of the new century may have felt like an apogee for the European project, already by this point a majority of respondents in major EU member states felt distrust in European institutions. Further efforts at European integration have been forced against the will of European publics, as evinced from the Dutch and French votes against the European Constitution in 2005, or the Irish rejection of the Nice Treaty in 2001 and the Lisbon Treaty in 2008. The vote for Brexit in 2016 shows the inherent limits in elite-led integration — and the project of global governance more generally.

How did we get here?

Why have citizens across Western democracies become increasingly nationalistic, opposed to mass migration, and suspicious of international institutions? One answer is that this is a consequence of the financial crisis, which has left deep pockets of economic deprivation and underemployment. But that answer is clearly wrong, because these trends have been in place for the better part of 30 years. A more accurate answer would be that they reflect an inherent tension between national democratic sovereignty and elite-led efforts at global integration, and that this tension has now reached its breaking point.

As economies and societies around the globe become more and more interconnected and bound within transnational rules and institutions, the range of policy options available to domestic policymakers has declined. Such constraints range from formal rules, such as the acceptance of the free movement of peoples within the European Union, or the asylum obligations that are outlined under the U.N. Convention Relating to the Status of Refugees, or the limits on deficits stipulated in European Union’s Stability and Growth Pact and the implicit economic constraints imposed by global financial and investment flows. Thus, on issue after issue, from corporate taxation, to control over immigration, to fiscal and monetary policy, national elites frequently find themselves unable to deliver policies consistent with public preferences. Instead they have blamed international institutions for their inability to take actions that they privately do not condone. In this way, politicians feel obliged, in the words of Hillary Clinton, to maintain “both a public and a private position.”

Yet the constraints on national sovereignty entailed by global markets and institutions has weakened the mechanisms that once translated popular views into public policy, leading to a “democratic deficit”’ that has left citizens increasingly frustrated with democratic politics, and increasingly with the democratic system itself. At the same time, the institutions of “global governance” have failed not only to provide avenues for popular participation, but also to deliver outcomes that such participation would be liable to generate, such as compensation for the losers from global trade, or protection of the identities and ways of life of local and national communities. In the words of Larry Summers, one of global integration’s advocates, it is a project “carried out by elites, for elites, with little consideration for the interests of ordinary people.”

This frustration has set up a dangerous dynamic, the consequences of which are now only too visible. In many countries, the only viable challenge to an increasingly homogeneous set of decision-makers comes from political parties or movements established by outsiders, such as the tea party movement and now Donald Trump in the United States, or populist parties of the right and left in Europe. These movements explicitly set themselves against a metropolitan and cosmopolitan elite which, they claim — not always without reason — routinely ignores popular demands and policy preferences. As the differences between establishment parties on the left and right have dwindled in many countries, the only way for voters to effect a change in policy has been to rally to parties that reject many of the traditional rules of the democratic game. In this way, as politicians’ responsiveness to citizens has decreased, citizens have been encouraged to turn away from democracy.

Where will this lead? History’s answers are not encouraging. In the runup to World War I, it was widely believed that a new liberal order had been constructed under the aegis of the British, French, and Habsburg empires, yet this world was thrown into utter disarray by the upheavals of war and the Great Depression. Far from eroding the nation-state, the era of elite-led global integration in the years after 1989 has similarly failed to create legitimate transnational institutions, leaving national democratic communities as the primary source of identity, security, and loyalty for citizens. Now that the defenders of the traditional nation-state are regaining the power they have coveted for so long, the future of global governance rests in their hands. At stake is whether they succeed in finding a new balance between national sovereignty and transnational cooperation — or instead, return us to an era of mercantilism, inter-state competition, and great-power warfare.