Is Big Army “patching over” citizen-soldiers, their history and communities?

Win or lose, a patch gives people skin in the game.

Throughout the past year, the U.S. Army has pushed a lot of narrative about “multi-component” units — those comprising formations of Regular Army, Army Reserve, and Army National Guard soldiers. This messaging usually focuses on flashy “re-patching” or “patch-over” ceremonies, in which soldiers (usually reservists) replace the patches on their left shoulders with those of a different, allegedly more famous (and usually active-duty) unit.

Throughout the past year, the U.S. Army has pushed a lot of narrative about “multi-component” units — those comprising formations of Regular Army, Army Reserve, and Army National Guard soldiers. This messaging usually focuses on flashy “re-patching” or “patch-over” ceremonies, in which soldiers (usually reservists) replace the patches on their left shoulders with those of a different, allegedly more famous (and usually active-duty) unit.

The latest is the Washington National Guard’s 81st Stryker Brigade Combat Team (81st SBCT). Rather than wear its regionally distinctive raven head — a blend of Northwestern Pacific design elements from the Haida, the Nookta, and Kwakiutl tribes — the brigade will now sport the active-duty Army’s 2nd Infantry Division patch. The U.S. Army Institute of Heraldry describes the symbolism of the latter as “an Indian’s head with war bonnet in profile.”

Meanwhile, salty veterans mutter about “round-out,” “WARTRACE,” and “CAPSTONE” brigades — examples of previous active-reserve integration programs. For some, it’s hard not to dismiss all the hoo-hah and hoopla as nothing more than yet another canine and equine extravaganza. Or, even worse, an attempt to plaster over some good old citizen-soldier history.

There are reportedly two efforts currently in play:

— The Associated Units program, which, in the words of one Army spokesman, “takes [the Total Force Partnership Program] a step farther by adding training and readiness authorities and responsibilities and prioritizing resources.” The three-year pilot ends in 2019. 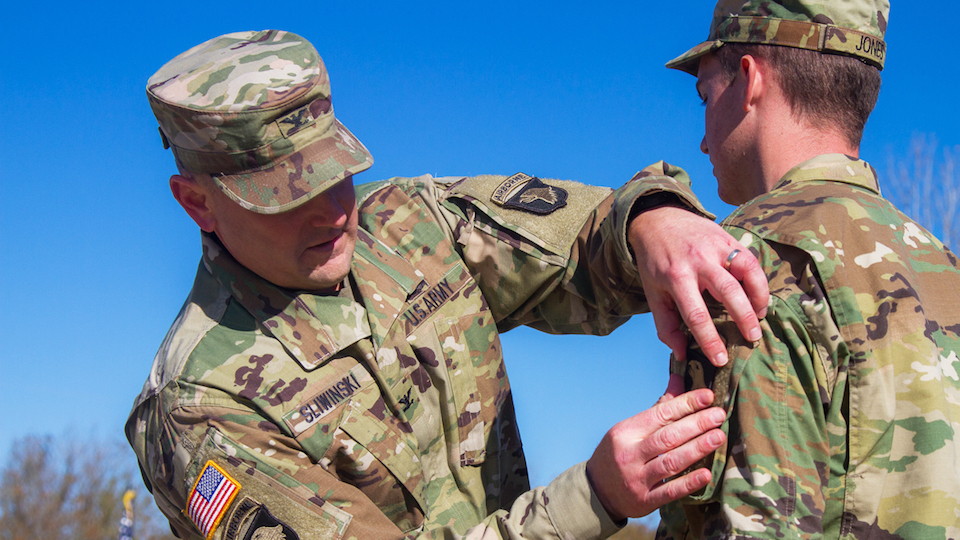 Re-patching goes both ways: Out of eleven or so units announced as participating in the Associated Units program, two are active-duty units that will now wear the patches of their Reserve Component counterparts. That includes a 10th Mountain Division brigade at Fort Polk, La., which will now wear the emblem of the Texas National Guard’s 36th Infantry “Arrowhead” Division.

Still, anything that makes the “Total Force” more homogenous can’t be a bad thing, right? After all, the gap between active and reserve cultures is as big a tank ditch as the “civil-military divide” everyone likes to talk about. Active-duty soldiers often think they don’t have to salute National Guard officers, because they’re not the same organization. I’ve seen it happen, more than once.

Here’s something else about the National Guard that Regular Army types don’t often understand: Citizen-soldiers are rooted in a history, geography, and community of place. If a bomb goes off under a National Guard Humvee downrange, the caskets all come back to the same hometowns. Our mothers and brothers and spouses and cousins often have served — or are currently serving — in the same units. We can spend entire military careers in the same units, following in our fathers’ and grandfathers’ bootsteps.

Communities have symbols, like sports team logos and state flags. So it’s natural that National Guard units, and their respective symbols, come to represent the ideals and aspirations of the places from which they come. Wear the 34th Infantry “Red Bull” Division patch while in uniform in any major airport, and people will chat you up about Minnesota and Iowa, just as quick as if you’d worn a NFL Vikings jacket or University of Iowa “Hawkeyes” T-shirt. An Arrowhead “T-patch”? Texas. A Thunderbird? Oklahoma.

If you want to improve a National Guard unit’s readiness and esprit de corps — and to grow a state’s reputation and history — you train and deploy that unit. You give them a mission and ownership of an area of operations. And you have them wear their own patch. Because that’s how reputations are made. Because that’s when histories are established, and why epic stories get written.

Because, win or lose, a patch gives people skin in the game.

Randy Brown is freelance writer, a 20-year veteran of the Iowa Army National Guard, and editor of the recently published Reporting for Duty: U.S. Citizen-Soldier Journalism from the Afghan Surge, 2010-2011. He blogs about military and culture at www.redbullrising.com.