Hangover Wednesday: What if Clinton wins in a squeaker and some people in the country refuse to recognize the results?

A credible scenario today exists in which, the day after 58th quadrennial U.S. presidential election on November 8, 2016, the wheels start to come off the United States of America.

During this last week of 2016, we are reposting the ten most viewed Best Defense blog items of the year. Here is number nine.

A credible scenario today exists in which, the day after 58th quadrennial U.S. presidential election on November 8, 2016, the wheels start to come off the United States of America.

I never thought I would live to type these words. In all the decades I have reported on this country, this is the first time I can imagine such a future as credible. But fortune favors the prepared mind.

So what if Hillary Clinton wins in a squeaker? Where does this year’s anger go and how is it manifested? Suppose a significant minority of the country refuses to recognize the legitimacy of her administration? I am beginning to fear the sort of “Bleeding Kansas”-style resistance we saw in the 1850s. Imagine Oregon-militia style takeovers of federal facilities happening routinely. Imagine IRS offices fire-bombed. Imagine state legislatures — South Carolina, Arizona, Idaho — declining to cooperate with what they call “the illegitimate Clinton regime.”

This scenario starts with the following focal question: “If the two major candidates for the presidency in 2016 are Hillary Clinton and Donald Trump, what happens the day after the election?”

The first critical uncertainty is the obvious one: “Who wins?”

The second critical uncertainty is “How big is the margin of victory?”

If you cross these two as in classic scenario planning practice, you get a two-by-two matrix that offers four extremely different stories about the future. 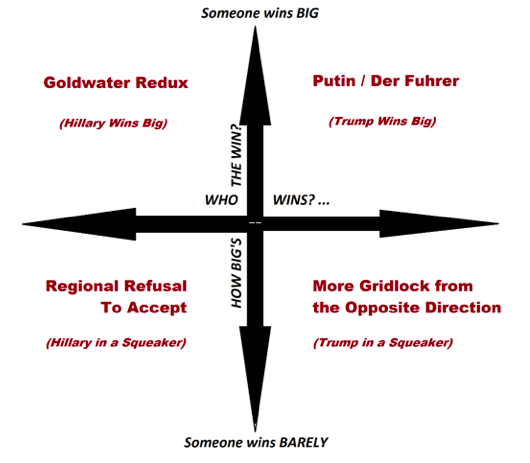 Two of these have been much discussed by the chattering class:

If Trump wins big, some pundits have made no secret of fearing a scenario that can be described as “Putin.” If Clinton wins big, as many Democratic political operatives gleefully hope, you get a scenario that may be called “Goldwater Redux.”

For those of you too young to remember what “Goldwater” means, Wikipedia will tell you that after Barry Goldwater was viewed as too extreme by many in his own party, in the 1964 election Lyndon Johnson “won 61.1 percent of the popular vote, the highest won by a candidate since James Monroe‘s re-election in 1820.” What’s more, in 1964 the House and Senate went to the president’s party by more than a two-thirds margin, uniting the powers of Washington in overwhelming fashion, leading to the passage of the Great Society programs.

For better or for worse, neither “Putin” nor “Goldwater Redux” are particularly difficult scenarios to imagine, as op-ed commentators have demonstrated. So those are not the ones I’m focusing on.

Nor is it difficult to imagine what happens if Trump wins small. If there is a squeaker election, in this scenario, one could envision a continuation of the Obama years, only from the opposite direction. A viciously divided Republican Party — as well as the rest of the government — gets little done. Call this “Gridlock.”

It’s the final, lower-left scenario that concerns me. What happens if Clinton wins by the narrowest of margins? More important, what if some significant portions of the country refuse to accept that outcome?

This “Regional Refusal” scenario is presaged in today’s headlines. On January 2, near Burns, Oregon, for the first time in modern history, armed militia went on the offensive. Armed with AR-15 assault rifles, pistols and knives, dozens of men and women occupied federal property at the Malheur National Wildlife Refuge and held if for five weeks. This occupation continued for weeks “without any visible law enforcement,” according to the Washington Post. Several elected officials from neighboring Western states actively encouraged this militia takeover.

The occupiers considered their decision to seize Malheur to be a game changer, according to the Post. Spokesman LaVoy Finicum argued the armed takeover of the federal facility represented a significant strategic advance for groups rebelling against the federal government. He described taking the step forward to an actual occupation as “unprecedented”. Rhetoric that had been growing increasingly aggressive about how to respond to the federal government was turned into action. Finicum on January 26th was shot dead by Oregon police while allegedly resisting arrest, the only casualty of the occupation.

The Oregon state police say they have received death threats against the officer responsible. They have asked the state legislature to fast-track legislation that would let courts bar the disclosure of the name of an officer who uses deadly force for 90 days if there’s an imminent and specific threat to the officer’s life. Rep. Jeff Barker, the Democrat who chairs the Oregon House Judiciary Committee, says “The whack jobs — the militants — they were demanding to know the name of the officer that killed LaVoy, and they were going to kill him. We’re frantically trying to get this one done.”

In a 2014 face-off at militia leader’s Cliven Bundy’s ranch in Nevada, officers stood down after armed people on bridges “took sniper positions behind concrete barriers, their assault rifles aimed directly at the officers below,” according to The Post. For those with a strong hatred of the federal government, this was seen as a dramatic victory.

Bundy’s cause won support from two U.S. senators — Rand Paul, the libertarian Kentucky Republican who ran for President, and Dean Heller of Nevada, who referred to Mr. Bundy’s supporters as “patriots.” The armed confrontation received steady coverage by Fox News. Later, after Bundy suggested that “the Negro” would have been better off to be a slave than to be shackled by government subsidies, he was widely repudiated.

But the damage had been done. When the escalation occurred in Oregon, experts said the outcome of this standoff “invigorated” anti-government groups. Mark Pitcavage, senior research fellow at the Anti-Defamation League’s Center on Extremism, one of the country’s leading specialists on right-wing radicals, told The Post a showdown like the one in Oregon “was inevitable… because the anti-government extremists have been itching for a confrontation with the federal government.”

When the rebels finally surrendered in Oregon, more than 30,000 people listened in live, “capping an extraordinary 18 hours in which America’s growing and extreme anti-government movement morphed into something that more closely resembled a strange and nerve-racking TV show,” according to The Post. The drama was “fanned like a brush fire across like-minded social media accounts and YouTube.”

To be clear: A scenario is never a prediction. It is just a credible story about a future that could realistically occur.

To be sure: America has often seen close elections and of course nothing remotely like the “Regional Refusal” scenario occurred. The most notable modern example is 2000, when Al Gore wins the popular vote, and George Bush wins the presidency in the Electoral College after the Supreme Court upholds the controversial Florida recount. Even then — in that hallmark of a functional democracy — the losers fall into line and accept that they have a new president.

There are several conditions different in 2016, however. These aid and abet the credibility of this “Regional Refusal” scenario.

For example, the American central government over the last few years has become so dysfunctional as to become increasingly powerless among the people.

One of the pillars of American constitutional government — the House of Representatives — has essentially vanished. That’s new. This is getting perilously close to the collapse of central authority.

Shocks out of nowhere keep happening, as is classic in extreme scenarios. Justice Antonin Scalia dies. Not only is the Supreme Court hobbled by the prospect of tie votes. But for the rest of this year, the country probably will get a lesson from Senate Republicans in massive, determined lack of cooperation with a sitting administration.

President Obama in his second term has kept the wheels of federal government turning only by claiming and exercising controversial executive powers. (Ironically, a greatly expanded exercise of such claimed powers could inflame the “Putin” Scenario.)

Meanwhile, in this election campaign, where anger is stoked and insults are the coin of the realm, rarely are heard the phrases “the common good,” much less “the greatest good for the greatest number.”

So, in “Regional Refusal,” a narrow Hillary Clinton victory is so regionally hated that the consent of the governed is significantly rescinded. And nobody can figure out a way to stop it. As recently as a year ago, this scenario would not have been credible. It is only so today if, in 2016, American democracy has lost a significant amount of its resilience.

That’s the core of it.

Where does this go? I’ll let you develop the scenario from here. But “seditious conspiracy” (18 U.S.C. § 2384) is a crime under United States law. It is described as follows:

Arguably we are already past that. In “Regional Refusal,” the next step is local active resistance, to which the federal government does not have the will or ability to respond. What happens if regions of the country just decide to start taking over areas of authority previously reserved to the federal government? It’s not hard to imagine Texas and Arizona taking control of their borders with Mexico. They already have, to some extent. Some folk there have made it abundantly clear how they wish to deal with unlawful immigration. The only thing standing in their way is the U.S. Department of Justice. Pick whatever flashpoint you like in which active regional take-over might become the norm. Abortion. Income tax collection. Environmental law. Federal lands. Income inequality. ISIS sympathizers. Muslim immigrants. Prayer. The schools. Gay rights. The proper place of women. Race relations.

Let me repeat.  Scenarios never claim to be predictions – much less high-probability ones.  I don’t have a crystal ball and I don’t know anybody who does.

But if a scenario describes a future that is credible – especially if it highly unexpected – than that is a future to which prudent people prepare a strategic response.  It is all reminiscent of how scenario thinking was described in its earliest days, in the 1950s, when it was applied to the then-new Nuclear Age.

The practice was called “Thinking the Unthinkable.”

Joel Garreau, a former reporter and editor at The Washington Post, is the author of several best-sellers, including the landmark work on this continent’s cultural regions, The Nine Nations of North America. He long served as a scenario planner with Global Business Network. He is currently the Professor of Law, Culture and Values at Arizona State University’s Sandra Day O’Connor College of Law. The opinions expressed in this article are those of the author alone, and not those of any of the institutions with which he is or has been associated.

Thomas E. Ricks covered the U.S. military from 1991 to 2008 for the Wall Street Journal and then the Washington Post. He can be reached at ricksblogcomment@gmail.com. Twitter: @tomricks1
View
Comments
Tags: 2016, Best Defense, Voice