While lawmakers and outgoing U.S. officials urge Trump not to let the ‘orphaned’ Arctic slip through the cracks.

By Robbie Gramer, a diplomacy and national security reporter at Foreign Policy.
January 25, 2017, 8:00 AM

Increasingly, U.S. officials have come to see that the opening Arctic is becoming more and more important — “strategic,” even, as they often say in Washington. But it always seems to slip through the bureaucratic cracks of the U.S. foreign and defense policymaking machine.

With Arctic sea ice receding thanks to scorching temperatures, a once-closed ocean is now open for business (and, potentially, mischief) part of the year. Russia is taking advantage of the thaw to ramp up its military footprint in the region. Now, lawmakers and outgoing defense officials are hoping the United States under Donald Trump can finally get into the game at the top of the world.

The Arctic has long taken a backseat to other regions, particularly for the Pentagon, according to Sen. Dan Sullivan (R-Alaska). “What has been our national security strategy in the Arctic? Well I think until recently, from the U.S. perspective, from the [Pentagon] perspective, it really hasn’t existed,” he said, speaking at a Center for Strategic International Studies event on Tuesday.

That started to change a bit late in the Obama administration’s term, though it wasn’t driven by the Defense Department. The United States chaired the Arctic Council, an international body that oversees the region, and scored some big environmental agreements; Congress finally allocated money to start building much-needed icebreakers; and the Pentagon also developed a strategy for the Arctic after urging from the Senate.

But that’s not enough, Sullivan said, particularly given Moscow’s frenetic efforts in recent years to rebuild its military bases and infrastructure north of the Arctic Circle. He offered a map to show just that (though it’s important to note the map doesn’t include military infrastructure from U.S. NATO allies like Canada and Norway): 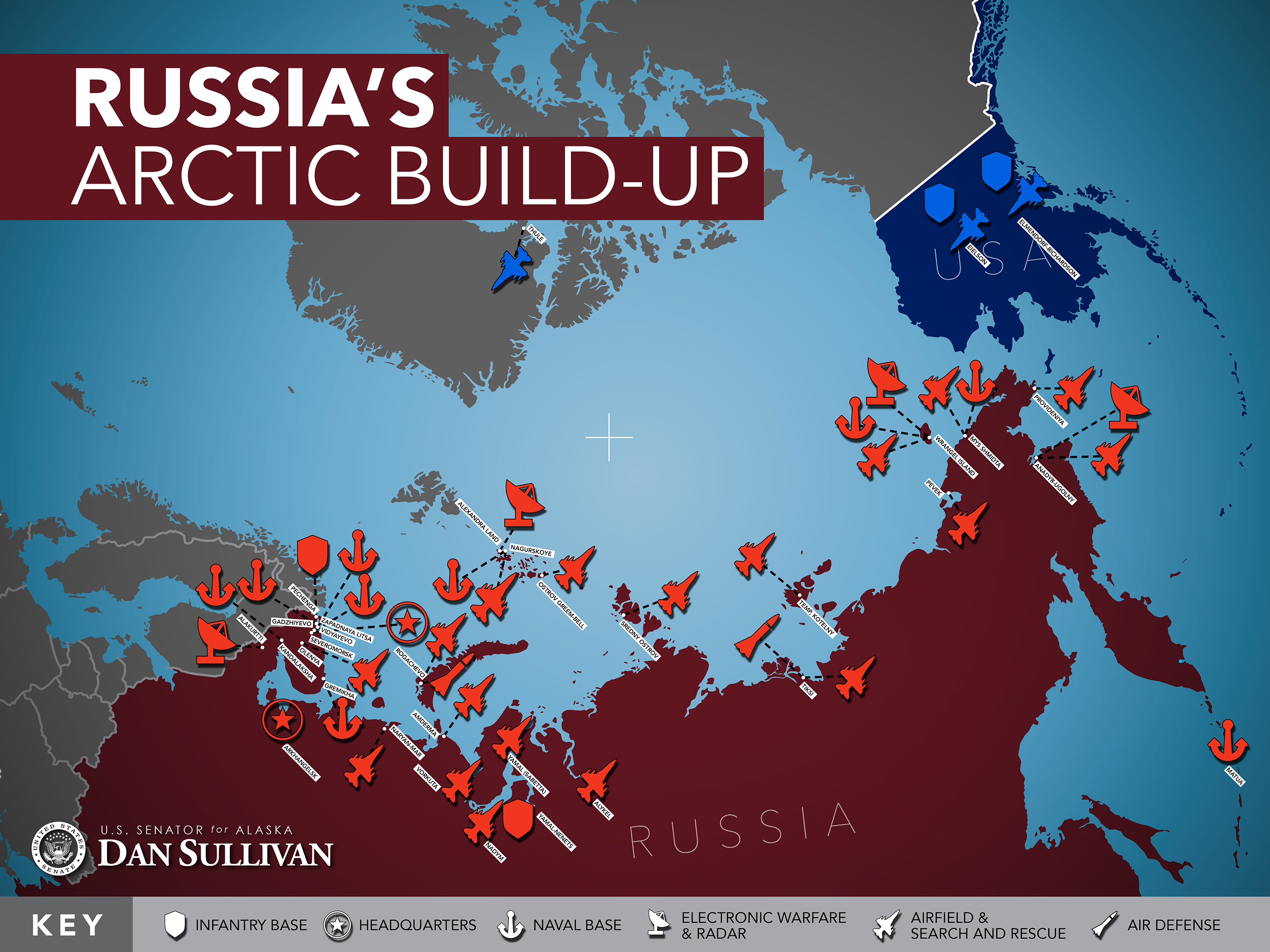 The numbers don’t lie. In recent years, Russia unveiled a new Arctic command, four new Arctic brigade combat teams, 14 new operational airfields, 16 deepwater ports, and 40 icebreakers with an additional 11 in development. (The United States has one working icebreaker for the Arctic — it’s only other one is broken.)

“They clearly recognized what the stakes in the Arctic are,” Sullivan said of the Russians. “They weren’t just talking, they were taking action,” he added.

Icebreakers are key for getting access in the Arctic. Melting sea ice makes the ocean more accessible, but also more prone to sudden shifts in ice cover, which require ships to punch a lead through the ice. The Coast Guard says it needs six to cover responsibilities at the North and South Poles. And they cost a billion dollars to build.

“The highways of the Arctic are icebreakers,” Sullivan said. “Russia has superhighways, and we have dirt roads with potholes.”

Some of Trump’s cabinet picks suggest that — despite rampant confusion in the administration over the scientific reality of climate change and its impact on other security problems — Arctic issues could still get a hearing.

Trump’s secretary of state-designate, former ExxonMobil CEO Rex Tillerson, has deep familiarity with Arctic energy issues. A good deal of U.S. interest in the Arctic, after all, comes from the vast reserves of oil and natural gas believed to lie under the seafloor. Shell dropped $7 billion looking for oil off Alaska, until it pulled out in 2015. Obama put much of the Arctic offshore off limits for oil exploration late in his term, but that could possibly be reversed. ExxonMobil signed joint ventures with Russian oil companies to look for oil in the Russian Arctic, but had to put them on hold after the U.S. sanctions came into effect in 2014.

Newly-annointed Secretary of Defense James Mattis also addressed the Arctic during his confirmation hearings. “The Arctic is key strategic terrain. Russia is taking aggressive steps to increase its presence there. I will prioritize the development of an integrated strategy for the Arctic,” he said in a written questionnaire to Congress, according to Sullivan.

“Within the Pentagon the Arctic as an issue…is a bit of an orphan,” he said, speaking at the same event. The Arctic bridges the military’s Northern Command, Pacific Command, European Command and energy, environmental, and security issues in the Pentagon. And the State Department’s Arctic envoy, former U.S. Coast Guard commandant Robert Papp, left office with the rest of the Obama administration. As with many other important foreign policy posts, Trump has yet to announce a replacement. With empty seats in the State Department and no clear division of labor in the Pentagon, the Arctic snowball gets dropped. “How do you deal with the Arctic when you have got so many competing claimants?” Townsend asked.

It’s an open-ended question. In his first days in office, Trump hasn’t indicated what his Arctic policies would entail. And with everything on his plate — from China to the Islamic State to “alternative facts” on the size of his inauguration crowd  — he may not for some time.

But if Trump’s would-be rapprochement with Russia goes south, things might first start getting hot up north.

In Kyiv, Blinken Shows a New Face for the U.S.

After Trump, Biden’s top diplomat works to patch up relations with Ukraine—and with beleaguered U.S. diplomats

As it goes full authoritarian, the Kremlin is targeting the last vestiges of civil society and independent media.