Guards and Detainees Alike Left in Limbo at Trump’s Guantánamo

Under orders for years to shut the prison down, commanders at Gitmo are now bracing for the new president’s “bad dudes.”

GUANTÁNAMO BAY, Cuba — The U.S. naval station and military detention facility at Guantánamo have seen plenty of small changes lately — and one huge one.

Last week at the 45-square-mile base inhabited by more than 5,000 people, including 41 detainees, lettering on a Subway restaurant sign advertised a Valentine’s Day sale: “Victoria’s Secret panties, 5 for $25.” The menu at McDonald’s appeared redacted, with the black boxes associated with government secrecy covering some items. A radio DJ at the local military-run station pondered whether to change its longtime slogan from “Rockin’ in Fidel’s Backyard” to “Rockin’ in Fidel’s Graveyard” now that longtime Cuban leader Fidel Castro has died.

But the biggest change, of course, is that Donald Trump now scowls down from atop the pyramid of photos showing the base’s chain of command. Last month, former President Barack Obama, who ordered the military prison closed more than eight years ago, handed it off to a new commander in chief who has vowed not only to keep the prison open but also to “load it up with some bad dudes.”

But the military officials charged with detention at Guantánamo said they have yet to receive new orders to reflect the policy reversal that will reshape the prison’s future and, more importantly, U.S. counterterrorism policy and reputation in the world. The transition has thrown them and the detainees into a new limbo, still operating under Obama’s previous guidance despite being all too aware it has an expiration date and is in direct contradiction with Trump’s imminent new directive.

Army Col. Stephen Gabavics, the commander of the guard force at Guantánamo, said, “We continue to follow exactly the same orders.” 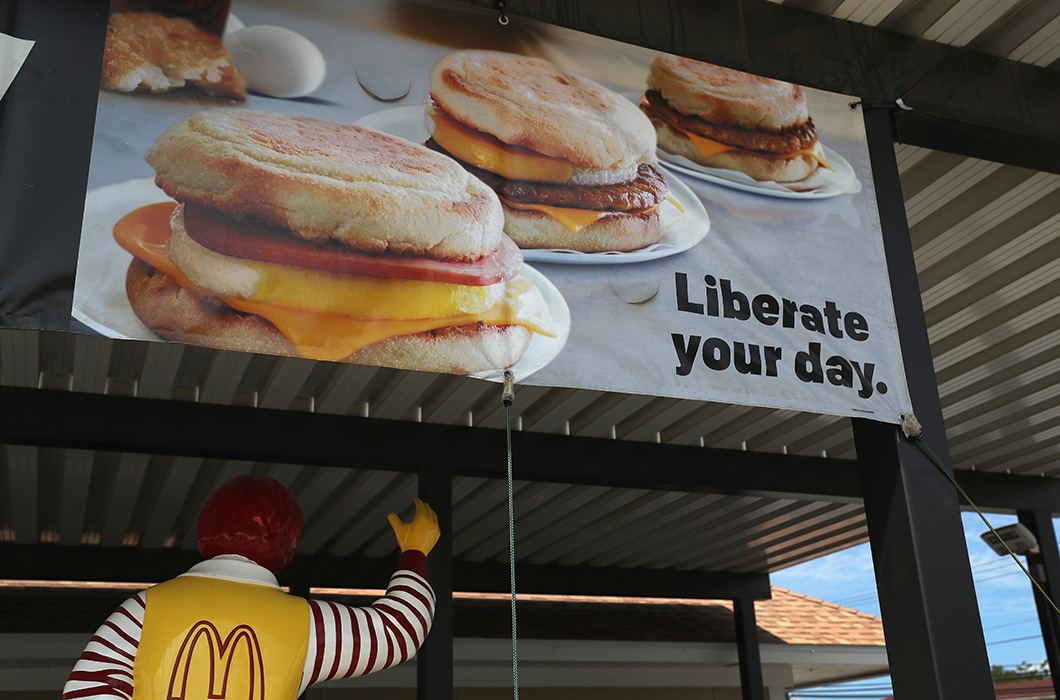 A McDonald’s for military personnel and civilians awaits customers at the U.S. naval base at Guantánamo Bay on Oct. 23, 2016. (Photo credit: JOHN MOORE/Getty Images)

The whiplash is notable for leaders who’ve spent years trying to wind down the notorious prison, which first opened in 2002. Navy Rear Adm. Peter Clarke, who heads Joint Task Force Guantánamo, allowed that for the past eight years “the previous administration had a concerted effort to shut down operations.” That’s not the case now. “To my understanding, the opinion of the current administration is that there is a need for conducting military detention operations.”

These officials insist that Trump’s 180-degree shift from Obama does not affect their day-to-day operations right now. But they expect new orders any moment and, as is typical of the military, have contingency plans. They began reviewing procedures and facilities as early as last spring in anticipation of the command change.

But the prison is not quite ready to host Trump’s “bad dudes” immediately. Gabavics said, “I’m not set to take in detainees tonight.”

His boss, Clarke, expressed confidence that they’d get a “little more notice than, ‘There’s a plane in the air that’s going to land in four hours,’” as well as some indication as to whether the new detainees are male or female and members of the Islamic State, al Qaeda, or “other groups.”

“The few days, if that’s all I have, will be adequate for me,” he said.

The battle over the future of Guantánamo only adds to its surreality, a contrast of seemingly every apple-pie American military town — that happens to be built on land “leased” from the Cuban government for roughly a century — with one of the world’s most secure prisons.

The night of Feb. 10, on the other side of the base from the detention facility at one of several outdoor movie theaters, little girls ate blue cotton candy while the audience stood at attention for a national anthem-backed military montage before the start of the movie Lego Batman.

The collision between post-card perfect Caribbean beaches and dilapidated, long-abandoned camps is at its starkest at Windmill Beach. On Sunday Feb. 12, a pasty man basked on a lounge chair next to turquoise ocean, overlooked by the barbed wire of “Camp Iguana,” where juvenile detainees were once held. On its weather-worn sign with the tagline “Honor Bound to Defend Freedom,” a Pentagon logo has peeled nearly off.

For now, detainees only live in Camp 6 and Camp 7. The military considers the 26 “lower-level” detainees in Camp 6 to be “in compliance,” allowing them newspapers, books, movies, and video games on televisions in communal areas of concrete cellblocks. For all but two hours a day, these detainees roam freely within these blocks or a yard outside. Many closely followed the election and its aftermath.

“They fully understand that President Trump is now our commander in chief,” Gabavics said.

They are constantly watched, save in the showers and when they choose to briefly block cameras to go to the bathroom. During prayer time, they signal to the guards through one-way glass and flip over a sign, indicating a need for quiet. On Saturday, Feb. 11, a female guard in camouflage fatigues cracked open a soda while watching a group bow their heads to colorful prayer rugs in the near-dark.

Somewhere just beyond the cactus-covered hills, Camp 7 holds the 15 other detainees, including those charged with plotting the 9/11 attacks. Guantánamo’s most recent arrival, who came nearly a decade ago, lives there. Beyond acknowledging Camp 7 exists, officials here won’t comment.

Some 800 men have been detained here in all since 2002, including several minors in Camp Iguana. But Trump officials are finalizing an executive order to stop transfers out of the prison and allow for any new captured terrorist suspects — including from the Islamic State — to be sent there.

The Trump White House already appears to be on the hunt, with observers and lawmakers attesting that the botched Jan. 29 raid in Yemen — Trump’s first — was motivated in part by eagerness to capture new detainees. One Obama holdover may soon force their hand: a suspected al Qaeda member, reportedly Sudanese, currently being held by an unknown foreign government in Yemen. Trump officials are weighing whether to move him to Guantánamo, despite urging from the FBI and Department of Justice to try him in U.S. federal courts.

The detention facility in Cuba currently has about 200 available beds, officials said cautiously, but made clear that “it’s a very fluid number.” Still, despite Trump’s rhetoric about ditching federal courts, they’re not anticipating the large-scale detention of the early 2000s that filled camps here. Clarke said the primary constraints are if the new detainees include “high-level” security suspects or women or children, who would need to be segregated.

After the 9/11 attacks, at least 15 minors were brought to Guantánamo, several of whom alleged torture, from rape threats to sleep deprivation, according to Human Rights Watch. One later committed suicide here, at the age of 21.

Female detainees could pose another, novel challenge, and it’s not a theoretical question. The Islamic State has given women a role in combat, and U.S. special operators captured a female Iraqi Islamic State suspect in May 2015. The Obama administration ultimately decided to give her to the Kurds.

Officials aren’t yet prepared to say how they’d handle women. Cavity searches? Handling by male guards? Clarke said there is no “gender-specific” standard operating procedure but added that he didn’t foresee any issues “providing female detainees the necessary privacy,” as male detainees are. He then recited the camp’s commitment to provide humane care “to the maximum extent possible consistent with our security needs.”

Officials who repeat this refrain grin or grimace in turn when asked about their new commander in chief’s views on interrogation and detention. Trump has vowed to “bring back a hell of a lot worse than waterboarding” and, despite backing off an order that would review the use of torture and CIA “black sites,” has continued to insist that torture works (though his own defense secretary asserts otherwise).

Asked about the prison’s dark legacy and new fears over its future, Gabavics said simply: “We will not use torture.” Echoing what other military leaders have said, he added, “Whatever ultimately comes down, we’ll execute in accordance with the law.”

But Trump’s comments already have damaged a Sisyphean, decade-long effort by the military to rehabilitate Guantánamo’s reputation, after documented abuses here early in the George W. Bush administration sparked international outcry and made the prison a recruiting tool for terrorist groups, including the Islamic State.

One official tried not to laugh when, awaiting an interview, he overheard a reporter playing a video of actress Melissa McCarthy imitating White House Press Secretary Sean Spicer on Saturday Night Live.

“And then we’re going to read her emails,” McCarthy-as-Spicer said, “and if we don’t like the answers — which we won’t — boom!” the faux spokesman yelled, slamming a dark-skinned doll into a box. “Guantánamo Bay!”

Guards and commanders aren’t the only ones in limbo. Several detainees were cleared for transfer by the Obama administration but just ran out of time. The top doctor at the clinic for prisoners and guard staff said several detainees have expressed heightened concern after the election.

“There is certainly anxiety about what’s next,” said senior medical officer Cmdr. Robert Selvester, though commanders downplayed the reports, saying it wasn’t widespread.

Obama ultimately oversaw the departure of 196 detainees — far fewer than Bush’s 500-plus transfers — across a red-and-white “candy stripe” that marks the border at Guantánamo between captivity and freedom. The last batch flew out hours before Trump’s inauguration. Gabavics personally informed them they’d be moved.

But five in this category did not make it out before Obama exited, and the fear of the unknown under Trump has been particularly acute for them. Many now fear they will never leave.

“They thought there was a light at the end of the tunnel, and now things have apparently changed,” Clarke said.

Of the 41 who remain today — overseen by some 1,650 troops and civilians — only 10 have been charged with war crimes. The majority have been detained for more than a decade, and none were captured by the U.S. military.

Still, Clarke said there’s capacity if the Trump administration brings in “high-level” detainees. If necessary, officials said, they’ll house new detainees in Camp 5, currently under a $8.4 million renovation to convert it to a new medical facility, including a mental health ward. Though Obama blocked most large military construction projects during his administration, and reduced the guard force by about 400 beginning in August 2016, new barracks and dining facilities are being built.

Guantánamo supporters in Congress and in Trump’s cabinet argue that these investments are a reason to make more use of the prison in Cuba.

But the legal teams defending detainees question what that purpose truly is.

Shayana Kadidal, a lawyer with the Center for Constitutional Rights, just returned from Guantánamo, where he broke the news to one of his four clients that despite being cleared, he would not be transferred.

“Guantánamo is at its core a place to send Muslim men and boys to be abused and forgotten, with only the most minimal judicial oversight and visibility to media,” he said.

“So of course Trump loves it.”