The former reformer is allegedly quite corrupt.

The investigation, published on Navalny’s Anti-Corruption Fund’s website, notes that, while some call the prime minister “Dimon” so as to characterize him as pathetic, “He’s not Dimon. He’s serious uncle corruption.”

ACF alleges that, in addition to the summer home it exposed last year, Medvedev owns another mansion outside of Moscow worth 5 billion rubles ($85 million), a mountain residence in Russia’s Krasnodar region, and a fourth mansion in the Kursk region (described by ACF as Medvedev’s “ancestral home”). Additionally, ACF alleges that Medvedev owns plots of land in Krasnodar, a building in St. Petersburg, an Italian vineyard, and yachts.

Most damningly, if ACF is to be believed, the estate is not in Medvedev’s name, but in that of various puppet charity foundations and firms, overseeing holdings that span a continent. “The corrupt officials usually try to hide their activities, but these people are acting almost in the open. Hundreds of people are engaged in servicing Medvedev and his properties. And they all see, know and understand, who owns these dachas protected by the state special services,” the report’s conclusion states. Medvedev, when he was president of Russia from 2008 to 2012, tried to present himself as a reformer, Russia’s answer to U.S. President Barack Obama. But this report paints a decidedly different picture.

Second most damningly, the report includes this picture of Medvedev in brightly colored sneakers. 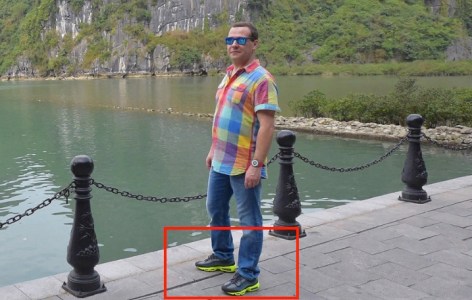 Medvedev’s spokesperson dismissed the report as propaganda in Navalny’s presidential campaign, which is true, at least in one sense — Navalny branded Russian President Vladimir Putin’s United Russia as the party of crooks and thieves and has long said he is running for president to root out corruption.

Emily Tamkin is the U.S. editor of the New Statesman and the author of The Influence of Soros, published July 2020. Twitter: @emilyctamkin