From Poland’s “Black Monday” strike to women shedding the compulsory hijab on social media, there is power in sisterhood and solidarity.

After journalist Masih Alinejad exposed corruption inside the Iranian parliament in 2009, she was forced to flee her native country. Labeled a “whore” by Iran’s government, she has been fighting the regime’s oppressive laws against women from the outside. In 2014, she started “My Stealthy Freedom,” an online campaign that invites Iranian women to photograph themselves unveiled to protest the compulsory headscarf law enacted after the 1979 Islamic Revolution. In Poland, women protesting against a repressive government took a less stealthy approach. In October 2016, the “Black Monday” strike against the Polish government’s proposed law banning abortion shut down the city and forced the government to backtrack and drop the restrictive measure. It was a victory for Krystyna Kacpura, the executive director of the Federation for Women and Family Planning, who has spent 25 years fighting for women to gain full reproductive rights in her native Poland. But beyond the different approaches, when it comes to pushing for change through protest, both activists agree: Women’s solidarity is the most powerful weapon. 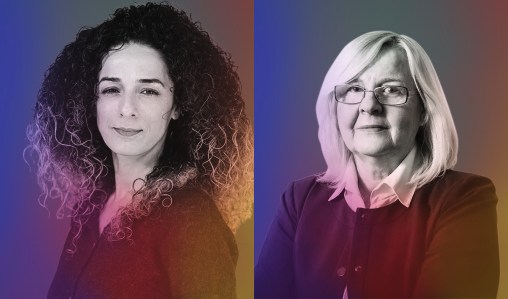 Krystyna Kacpura: “Black Monday” was the first massive women’s protest in Poland. Polish women showed unprecedented solidarity to each other, coming together to protest the total ban of abortion. In the proposal, all abortions would have been criminalized, including those in which a mother’s life was in danger or the pregnancy came from rape. Across the country, about 6 million people went on strike. In Warsaw, there were thousands of people in the streets. The city was blocked with women in black.

It wasn’t just a protest in the capital but also in small towns and villages. We organized this huge strike within a couple of days. It was a grassroots movement; there were no leaders, just ordinary people — students, workers from offices, and dressmakers working in shops. Even people who had to go to work showed solidarity with those who were on the street with a small signal — a black shirt or black umbrella or just a black poster on a door.

Masih Alinejad: Iranian women were watching the massive protest in Poland, and we were full of admiration.

KK: We received messages from Iranian women. We have pictures from your country: “We are standing in solidarity with Polish women.” It was amazing and emotional. I was crying, really.

But women in Iran, they are brave and they are smart enough to bypass the authorities and raise their voices. If you look on social media — Instagram, Twitter, Facebook — you will see the true face of Iran. This is the only place that women can protest against discriminatory laws.

For women of Iran, showing their hair is forbidden. When you turn on the TV in Iran, you only see women in hijab. You never see these unveiled women in any Iranian official media. The women posting photos of themselves without the hijab — these are just ordinary women. They don’t belong to any political group or even women’s rights organizations. They are trying to break the censorship. They are trying to show the true face of Iran, which has been censored for almost four decades. That doesn’t mean we are fighting over a piece of cloth. This is just a symbol of freedom. This is about our identity.

This is a daily war. Iranian women are fighting for their basic right to be their true selves.

KK: We expected repressions against those who protested on “Black Monday.” We were certain that some of us would be punished. So one day on Facebook, an overwhelming number of Polish women announced, “I am guilty. I protested. I wore black.”

When the protest first started, there were some officials who said, “Oh, these ladies are playing. It means nothing for us. We are not going to change the law. We will wait for them to stop.” But that just made Polish women even angrier and more motivated. We answered them. The whole night, in Warsaw, the entrance to metro stations, bus stops, offices — everything was blocked by women in black.

The government didn’t know what to do or how to react. In Poland, women represent more than half of the society. Even the church argued against this law — not because of support for abortion, but out of opposition to legislation that would punish women who had abortions. Most Polish women are Catholics, so the church was afraid that it would lose followers. A special assembly was called in the parliament, and the law was promptly rejected. We won because [these lawmakers] were frightened of this massive protest.

And this is why rulers, governments, and politicians fight against total women’s solidarity. And why we must [maintain] solidarity with all women of the world.

MA: If you are feminist and you have some principles, you have to stand against any bad law, everywhere. Whether it happens in America, whether it happens in the Islamic Republic of Iran. When certain French municipalities issued the burkini ban in 2016, we never said that “this is an internal matter — this is the law within the country, and they have to respect the law.” No, it’s wrong. When a law violates women’s rights, this is our responsibility to show solidarity. That is called sisterhood.

KK: This is our power.

MA: Exactly. This is our power. Some Western feminists called it “white savior complex.” This is totally wrong. We don’t care whether those women in France were forced to take off their burkinis or if they were white or black. We don’t care about the color. We are talking about sisterhood. We never called the Western women or Western feminists to come to the Middle East and save us. I ask them to stand up for their own dignity, because the law would force them as well if they came to Iran. They are not interfering with an internal matter. The hijab law is about non-Iranians as well. This is why we ask them to show solidarity.

KK: Yes. This is the most important thing: our sisterhood. We have to remember this. We are responsible for our daughters, granddaughters, and for the next generation of our sisters. Some day they will ask, “What did you do for us, for women?”

MA: Exactly. You cannot say, “I kept silent because it was a country law.” You have to break the bad law, to make a respectable law.

KK: If any law is against us, this is not a good law. We are obliged to fight against this.

KK: Our solidarity, our sisterhood, is the most powerful weapon against this.

MA: We have nothing except our own power. Our own voices. Our own bodies.

This conversation has been condensed and edited for publication. A version of this article appeared in the March/April issue of FP magazine.