An oppressive era and the demands of motherhood never kept Queen Victoria from embracing public power and enjoying private satisfaction.

An oppressive era and the demands of motherhood never kept Queen Victoria from embracing public power and enjoying private satisfaction.

At the age of 4, Princess Alexandrina Victoria refused to speak to her mother, the duchess of Kent, in German, the duchess’s native tongue. The little girl who would become the most famous woman in the world seemed to know even then that a foreign accent was undesirable in a British ruler. She always had an astute sense of her own brand, to use a modern term.

When she came to the throne in 1837, at age 18, she didn’t adopt a “royal” name, such as Elizabeth, Mary, or Anne, but instead chose her middle name, Victoria, which was an Anglicization of her mother’s name, Victoire. It was an original creation, like “Beyoncé,” and surprised a nation that, after two centuries of male rule, was only just wrapping its head around saying, “God save the queen.” But it seems the tiny teenage monarch knew what she was about; she chose a name that embodied a glorious future characterized by Victory and, in doing so, named an era.

Today, we stand at an uncertain moment for women’s leadership in international affairs given Hillary Clinton’s defeat and the challenge this fall to the rule of Angela Merkel, Germany’s Mutti. Is there anything we can learn from the ruler who 150 years ago was the most powerful woman in the world?

She was, after all, among the first women to Have it All: a husband, nine children, and a demanding job leading what would become the mightiest empire on Earth. Unlike her great 16th-century predecessor Elizabeth I, Queen Victoria did not rule by denying her femininity. She was the first British queen regnant to marry and have children. Her nine confinements made clear that a woman could simultaneously have babies and give orders. Of course she was ably assisted by her husband, Prince Albert, who achieved great things in the scientific life of the nation in his own right. Still, there could be no doubt as to who was head of state — even within their household. Albert knew his place. “I am only the husband, and not the master in the house,” he wrote in 1840. It was she who had proposed marriage, and she adored the physical side of their union.

No demure 19th-century matron who lay back and thought of England, Queen Victoria clearly loved sex. In Osborne House, the holiday palace that she and Albert built on the Isle of Wight, there was even a special button by the bed that would lock the bedroom door so the royal couple could ensure that their exertions remained private. When the royal physician, Sir James Reid, suggested to the queen after the birth of her ninth child that she would be well advised not to have any more children, Queen Victoria reputedly said in horror, “Oh, doctor, can I have no more fun in bed?” 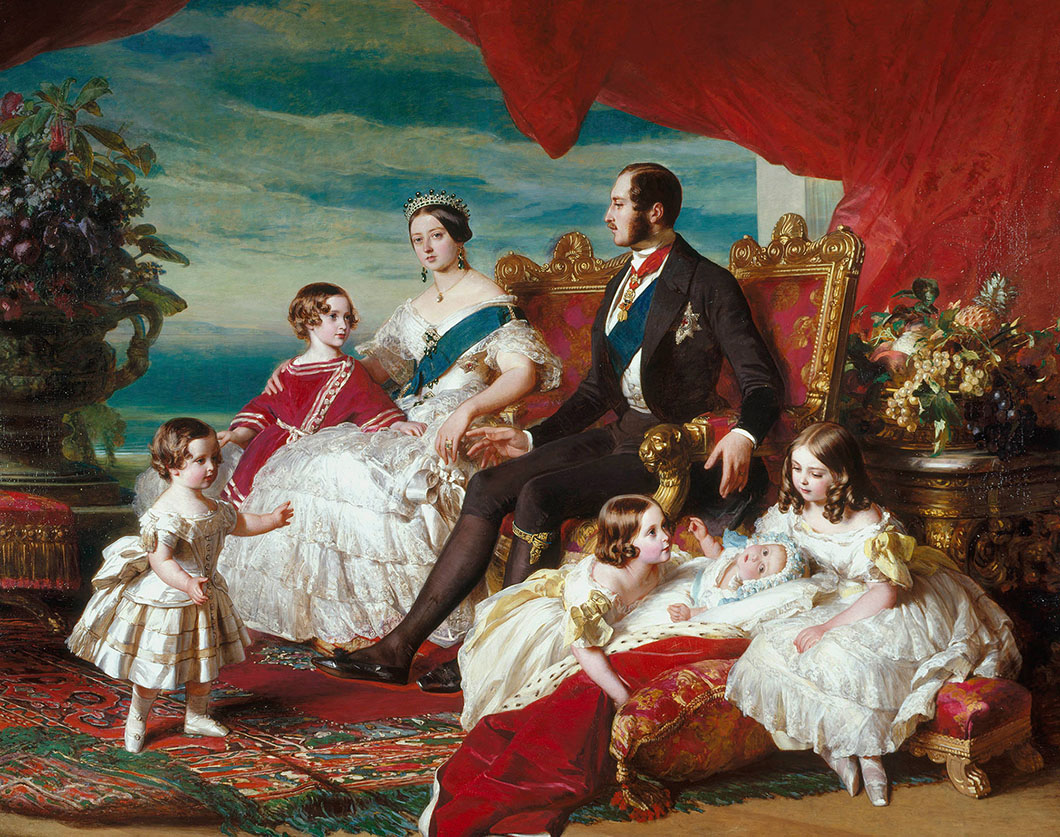 An 1846 portrait of Queen Victoria and her family by the German painter Franz Xaver Winterhalter. (Courtesy of the Royal Collection of the United Kingdom)

Children, for her, were an inevitable, and mostly unwelcome, consequence of a passionate marriage in the days before contraception was widely available. There’s no telling where she would have stood on the once-guaranteed reproductive rights that now hang in the balance in the United States and some European countries. But Queen Victoria surely shared one essential impulse with millions of women worldwide who took to the streets in January: a desire for ownership of her body and sexuality. She called childbearing the “shadow side” of marriage.

In deciding to take chloroform during the birth of her eighth child, Leopold, Queen Victoria struck a blow against the ecclesiastical patriarchy that considered pain in childbirth to be Eve’s curse; she called the anesthetic “that blessed Chloroform … soothing, quieting and delightful beyond measure.” Elite women soon clamored for the drug, despite the medical establishment’s warnings that it might sexually arouse patients. (Doctors eventually caved in to the demand.) And the queen did not breast-feed — she wanted to be on the throne, not in the nursery.

The queen did not breast-feed — she wanted to be on the throne, not in the nursery.

Queen Victoria came to power in the time of candles and carriages, but she lent her prestige to a number of progressive ideas. During the Crimean War, she supported Florence Nightingale, who helped raise the prestige of nursing in war zones. Late in her reign, she scandalized — but overruled — courtiers by promoting Abdul Karim, a young Indian servant, into her innermost circle. In the wake of atrocities committed by East India Company forces in retaliation for the Indian Mutiny of 1857, Queen Victoria called for some measure of British restraint, saying, “[T]here is no hatred to a brown skin — none.” She was also curious and well informed. As one Sunday Times essay in 2001 noted, she “enjoyed a grasp of world affairs far superior to many of the 20 Prime Ministers who worked to serve her.”

Perhaps it’s not surprising, then, that she’s having a moment in the early days of 2017. There’s a sparky biography by Australian journalist Julia Baird, and my TV series, “Victoria,” has attracted millennial viewers who might normally resist period drama. They see in the queen a lusty, emotion-driven woman in charge.

It would be anachronistic to consider Queen Victoria a feminist. She called the suffrage movement a “wicked folly” and virulently objected to women seeking equality with men. Still, those dismayed by the woeful shortage of women heading nations today — a mere 19 out of 193 world leaders — can at least learn from her political instinct and success at work-life balance and career management. Because despite the suffocating limitations placed on women of her time, and by deftly wielding hard and soft power in realms public and private, Queen Victoria turned the British monarchy from an exercise in rackety aristocratic caprice into the unassailably bourgeois matriarchy it is today. Long live the queen.

A version of this article originally appeared in the March/April 2017 issue of  FP magazine. Subscribe to FP Premium to receive the print edition.

Daisy Goodwin is the creator and screenwriter of the Masterpiece presentation “Victoria” on PBS.