A century ago, they fled to escape the genocide in the collapsing Ottoman Empire. Now these ethnically Armenian Syrians are trying to make a new home in their old country. 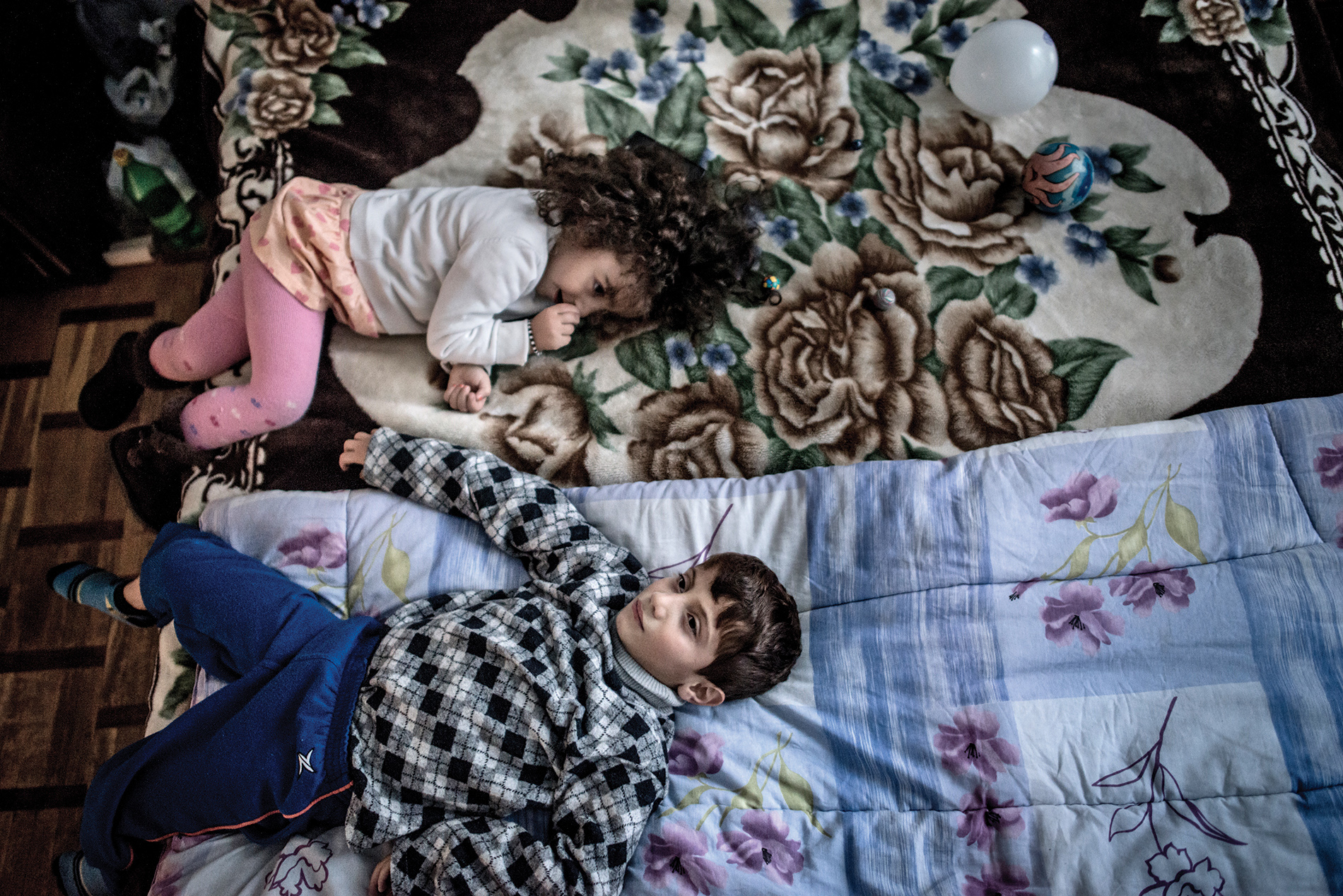 Khachig Manuel, 56, only has a single item to remind him of his former life in Syria — a gold-framed photograph of himself in happier times. Taken during a party to celebrate his engagement in 1993, the image now hangs in his living room in Yerevan, Armenia.

Many of the Syrian refugees living in Armenia arrived with little more than the clothes on their backs. A century ago, Armenians fled to Syria to escape the genocide in the collapsing Ottoman Empire; now, they have been forced to abandon yet another country being torn asunder. More than 20,000 Syrians, many of whom are ethnically Armenian, have found refuge in Armenia since the Syrian war began in 2011. And though they may be linked to this place by ethnicity and language, Armenia offers scarce economic opportunities.

“At the end of the day, they’re just people who want to live, who want to work,” said Anush Babajanyan, who photographed these families from September 2016 to January 2017. But as they struggle to rebuild their lives, some question whether they can make a home in a country that embraces them, but cannot provide for them. 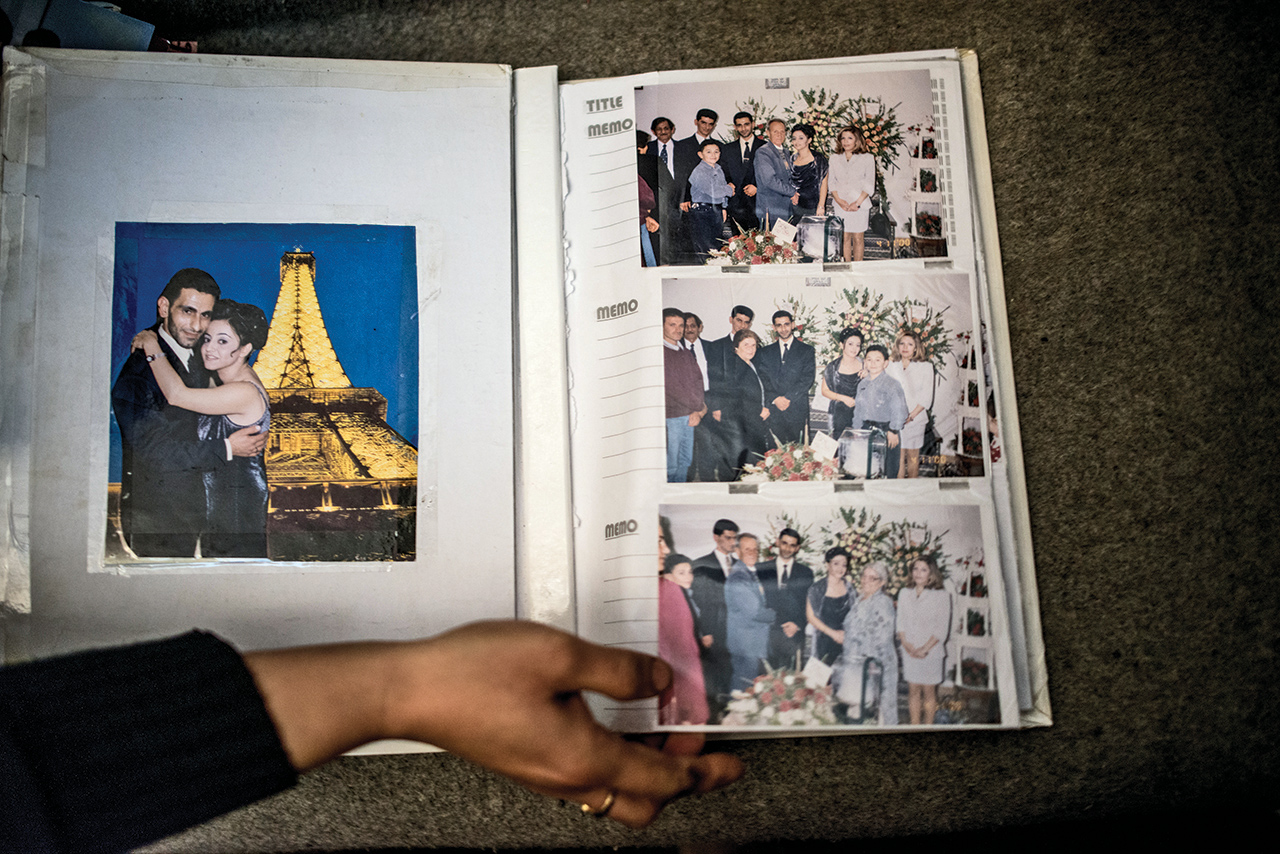 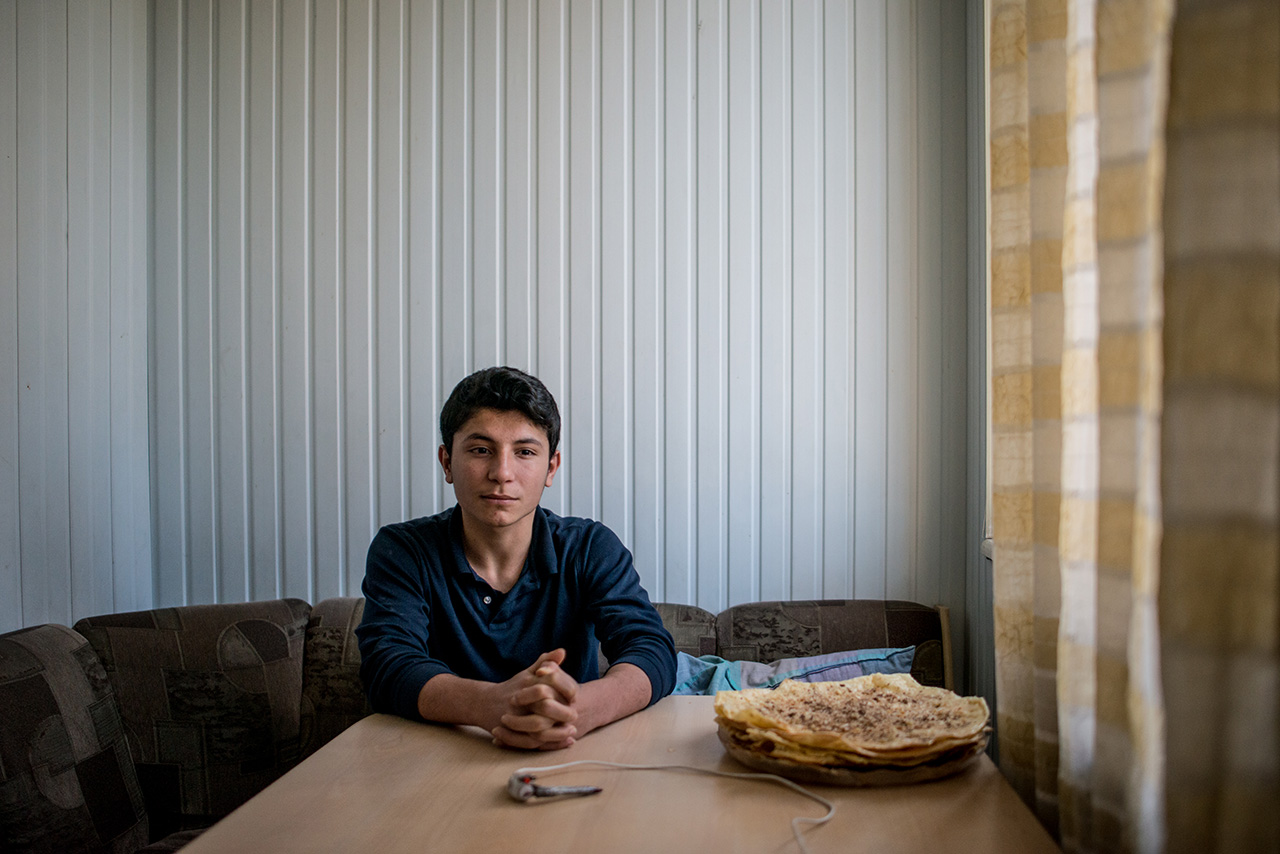 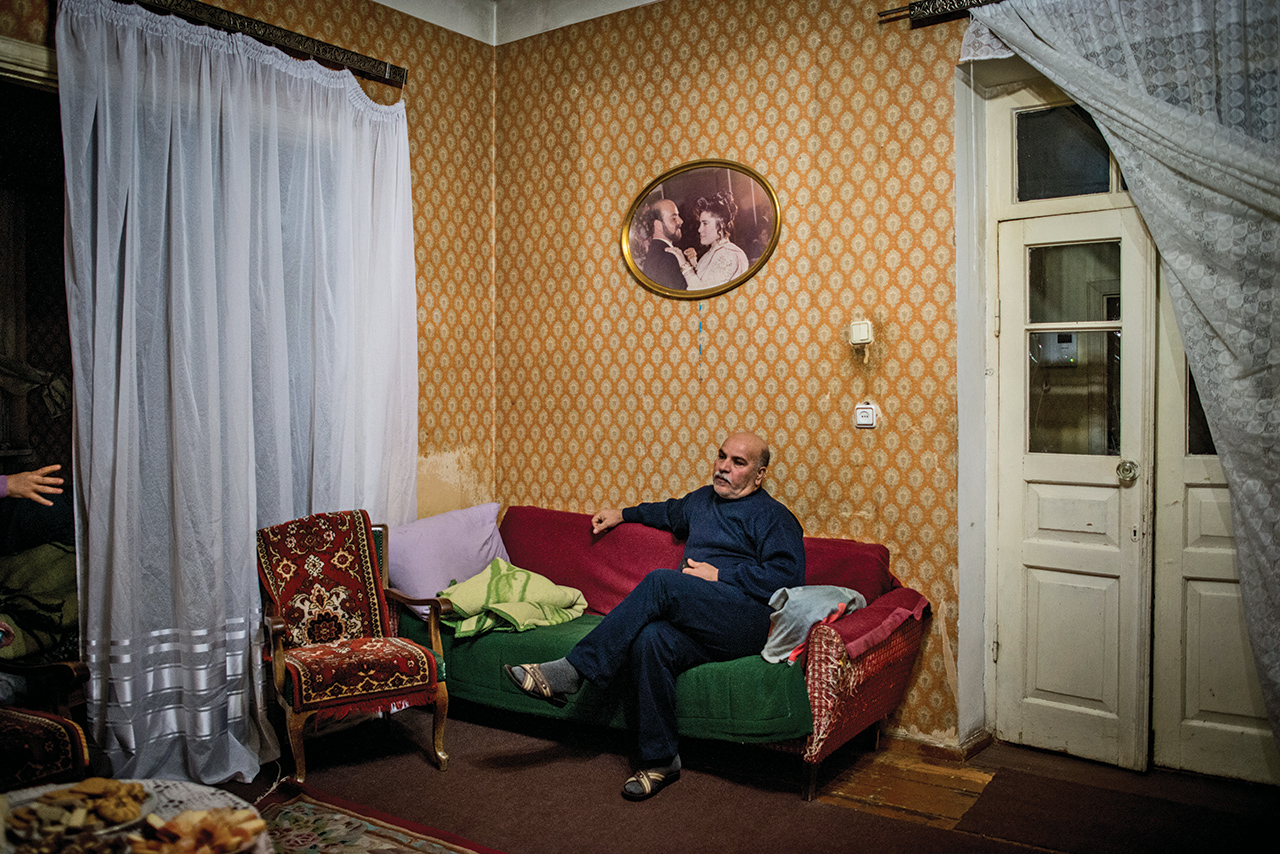 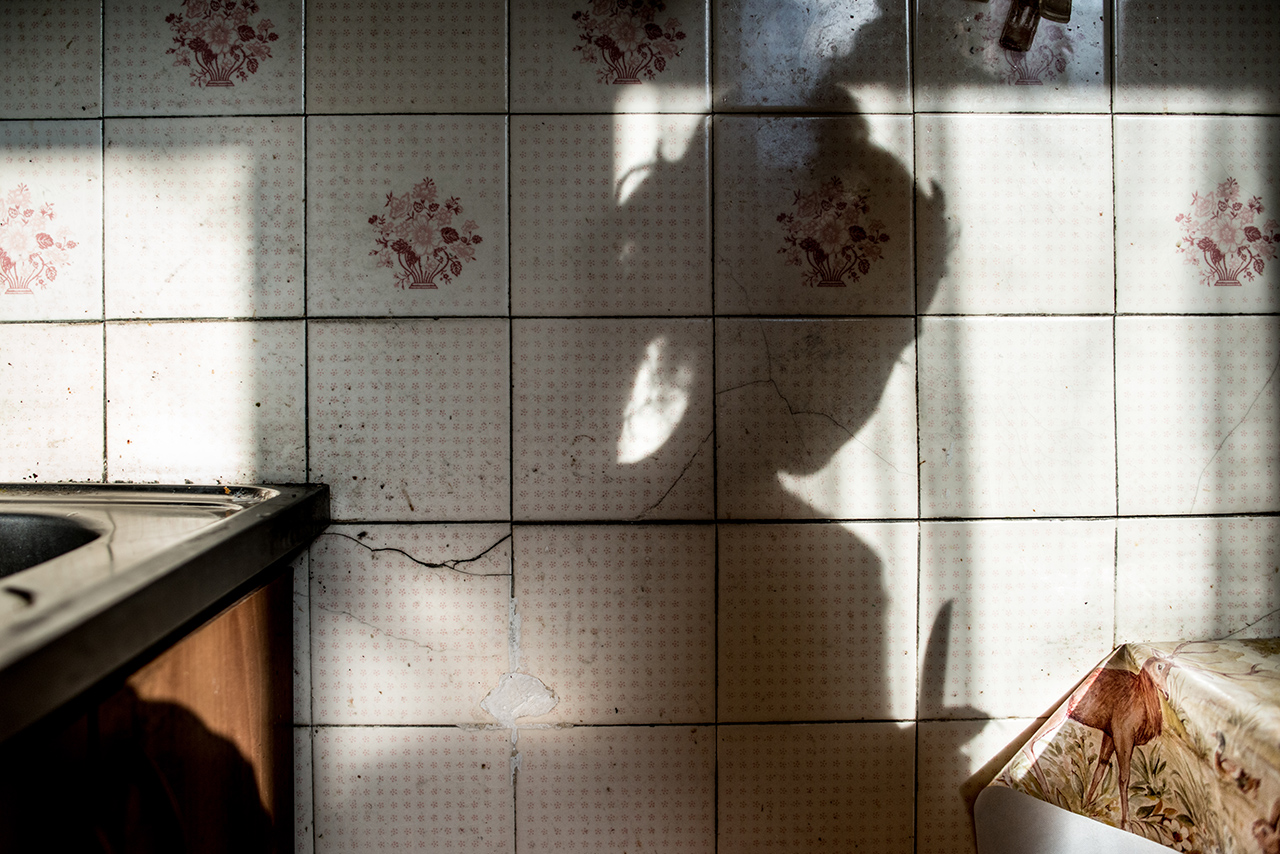 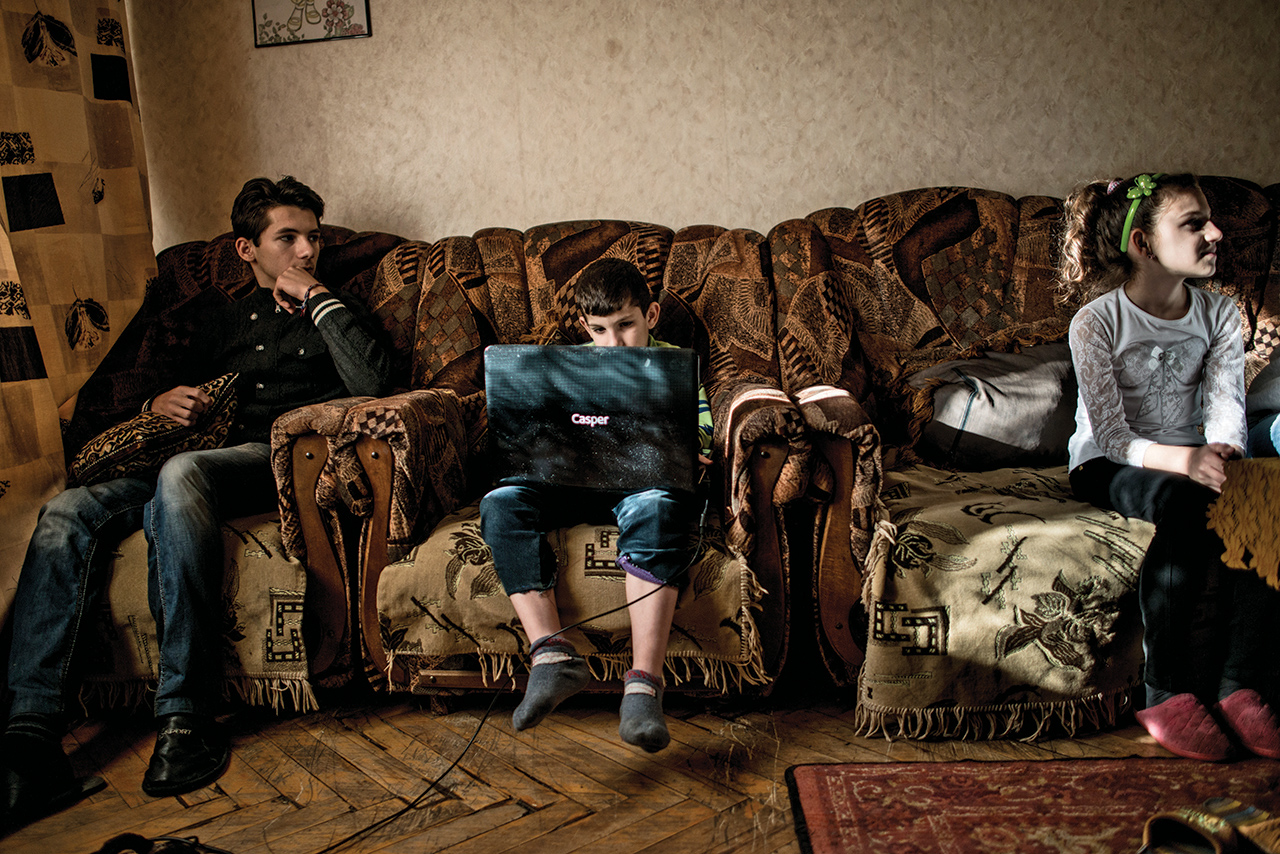 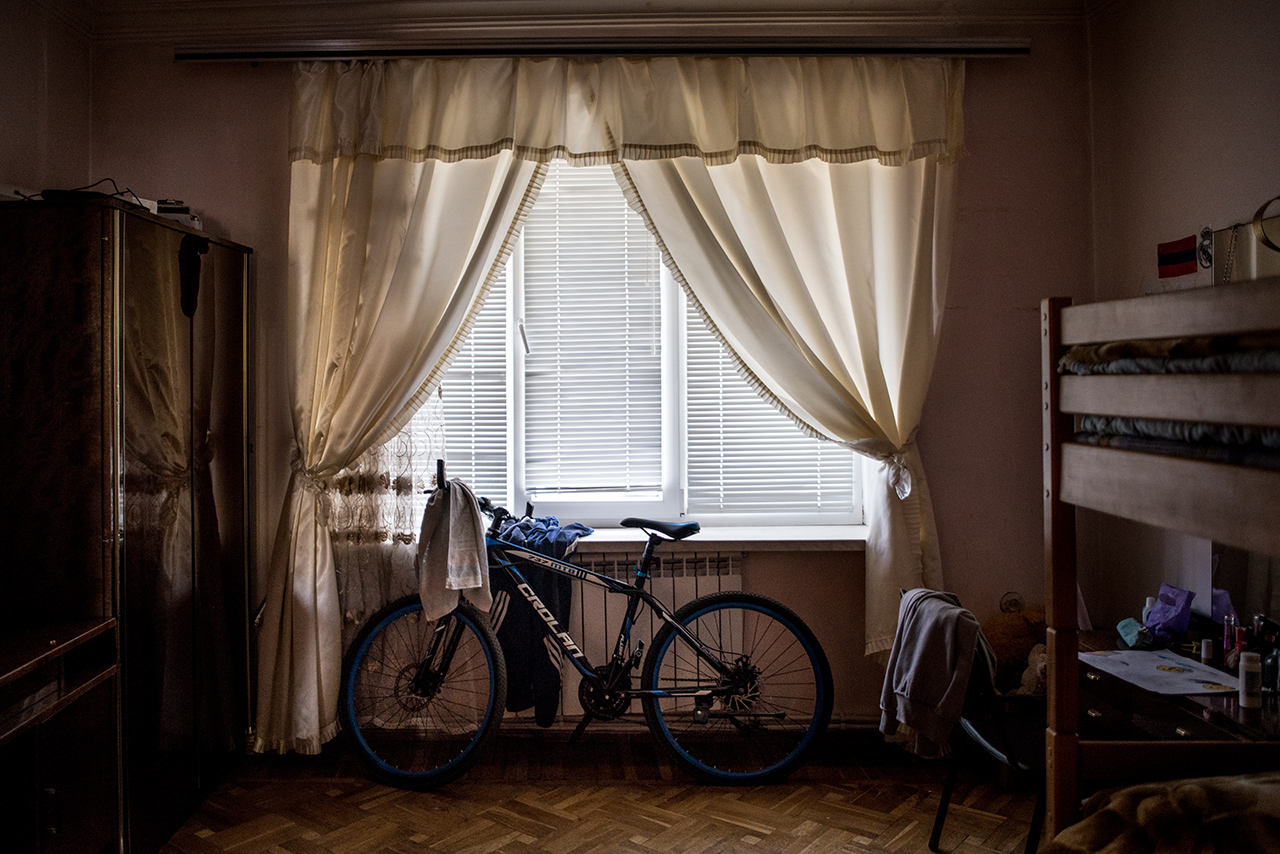 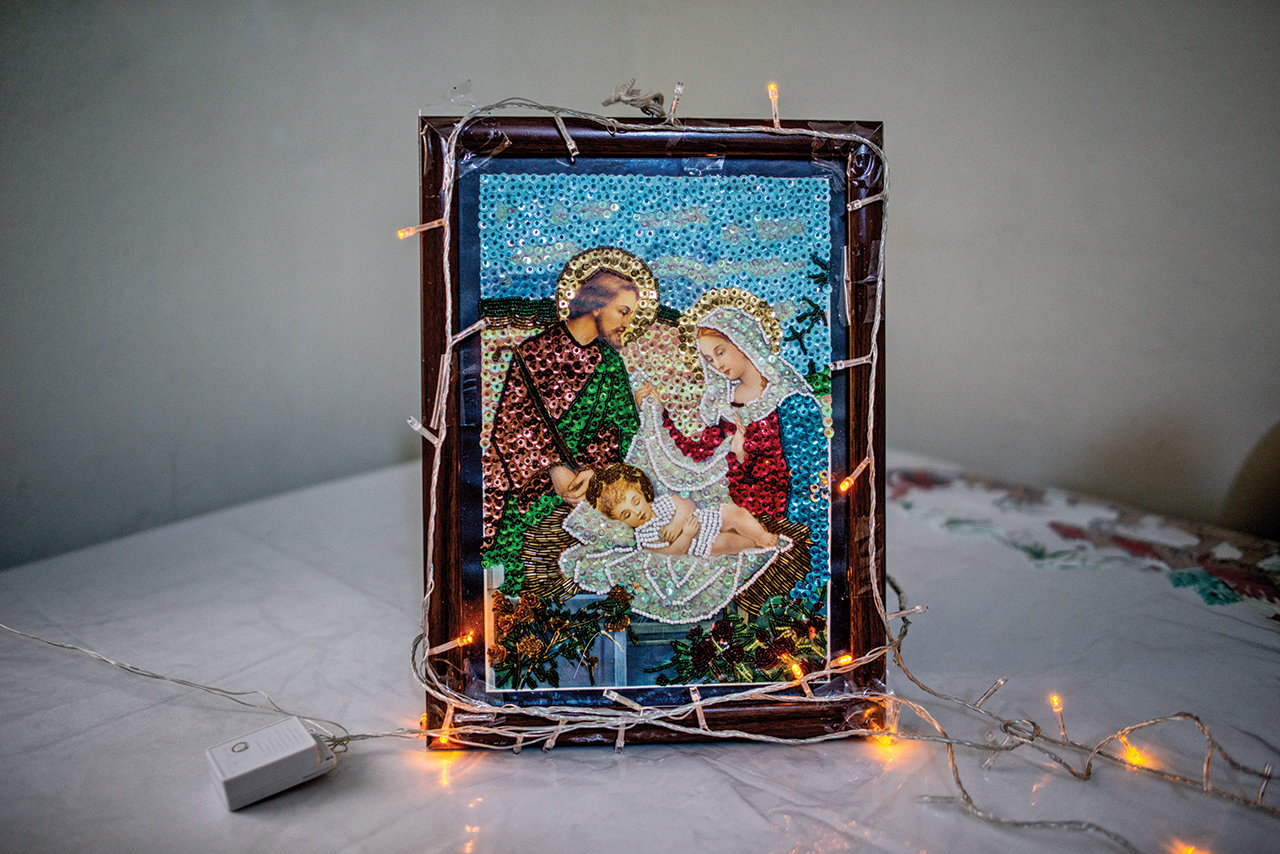 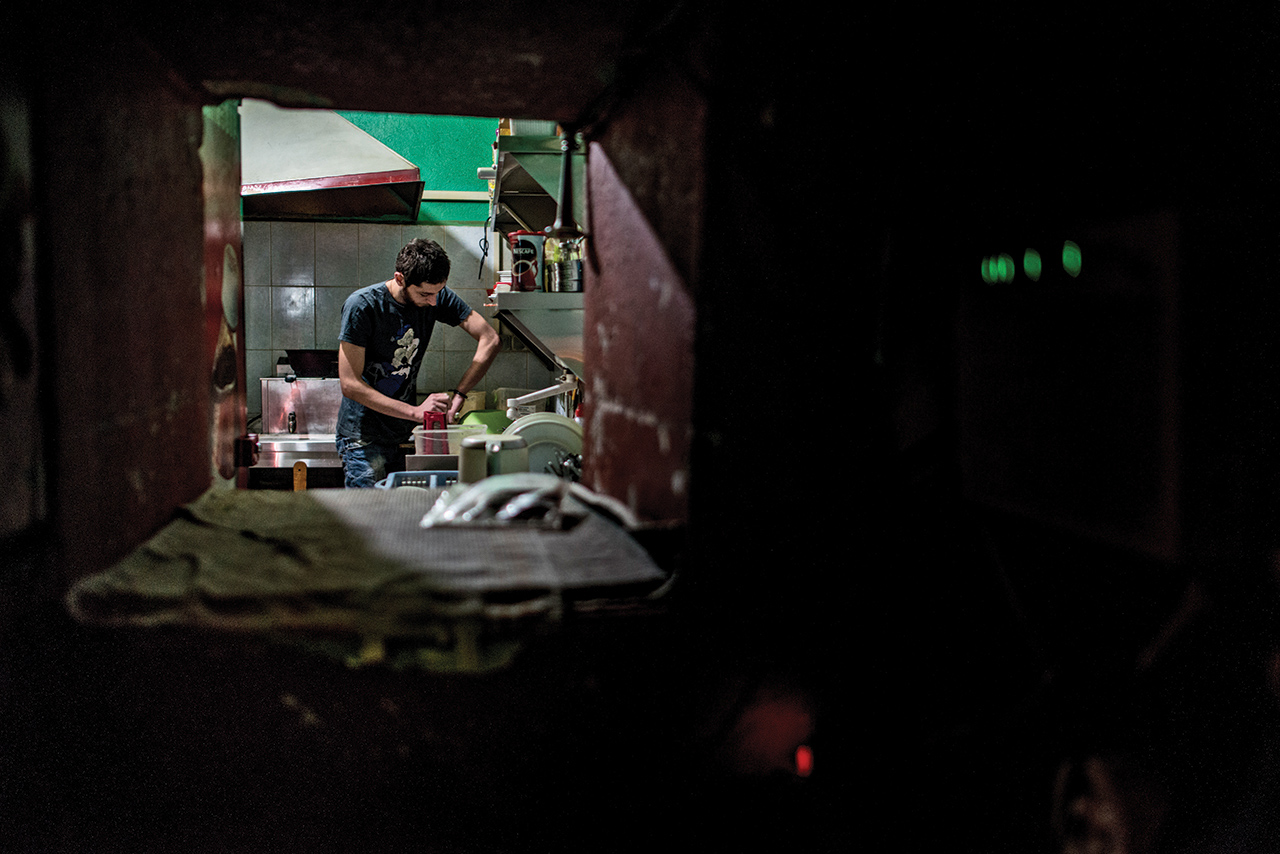 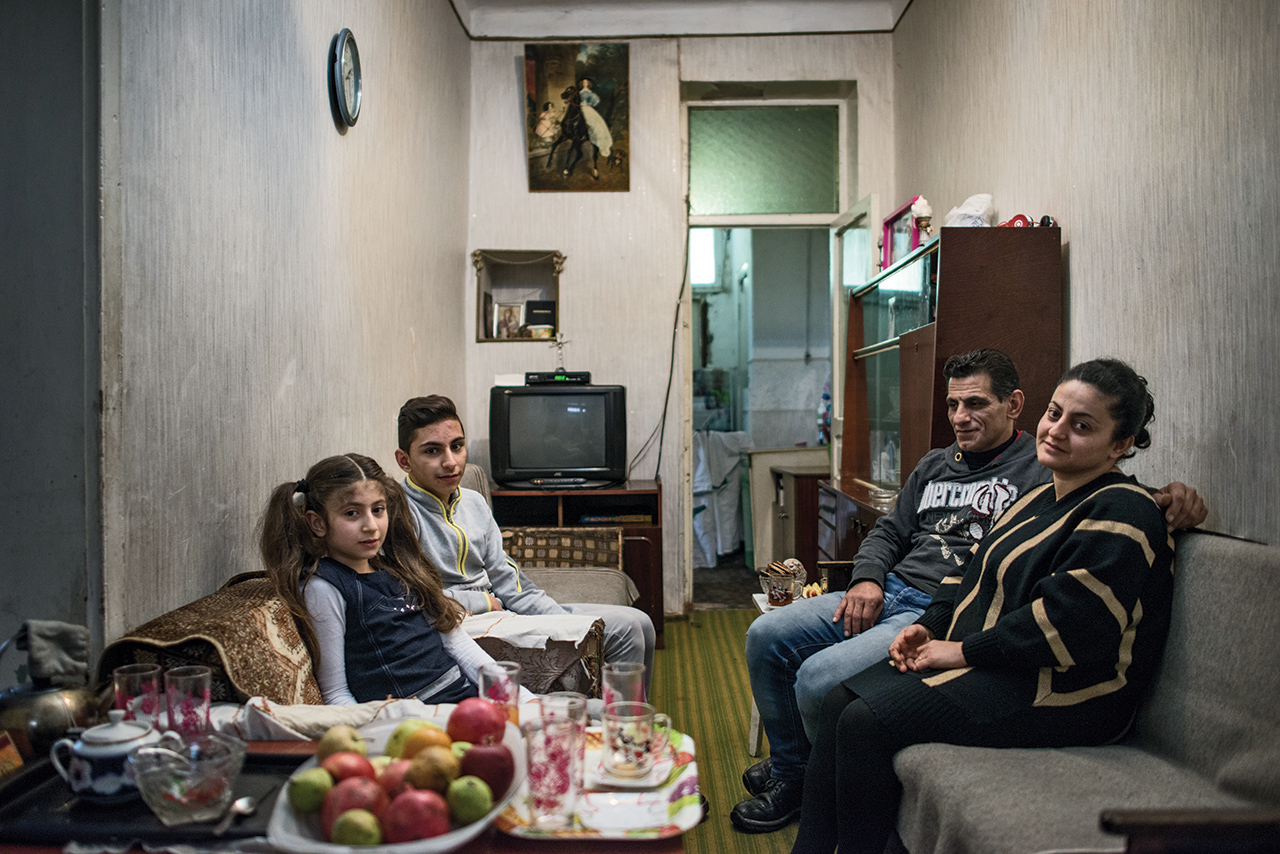 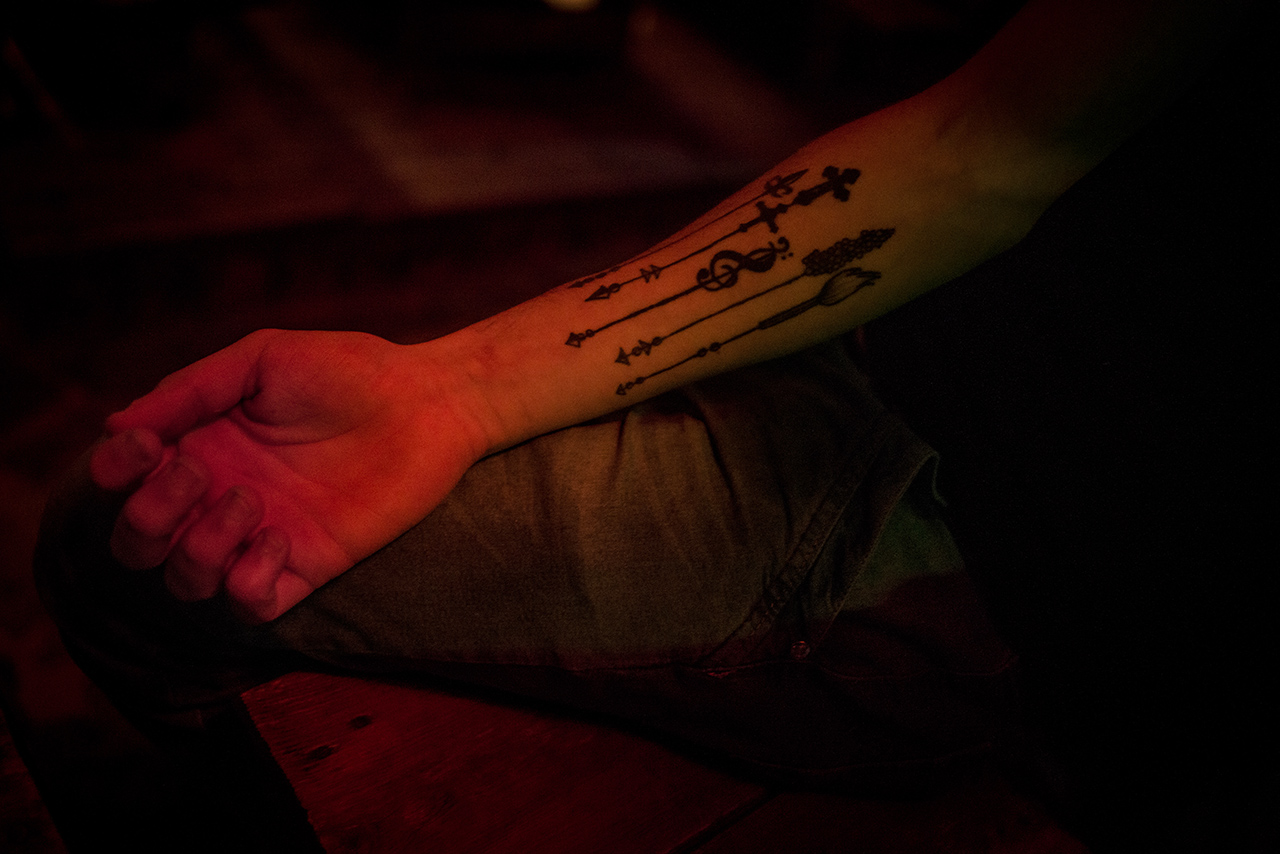 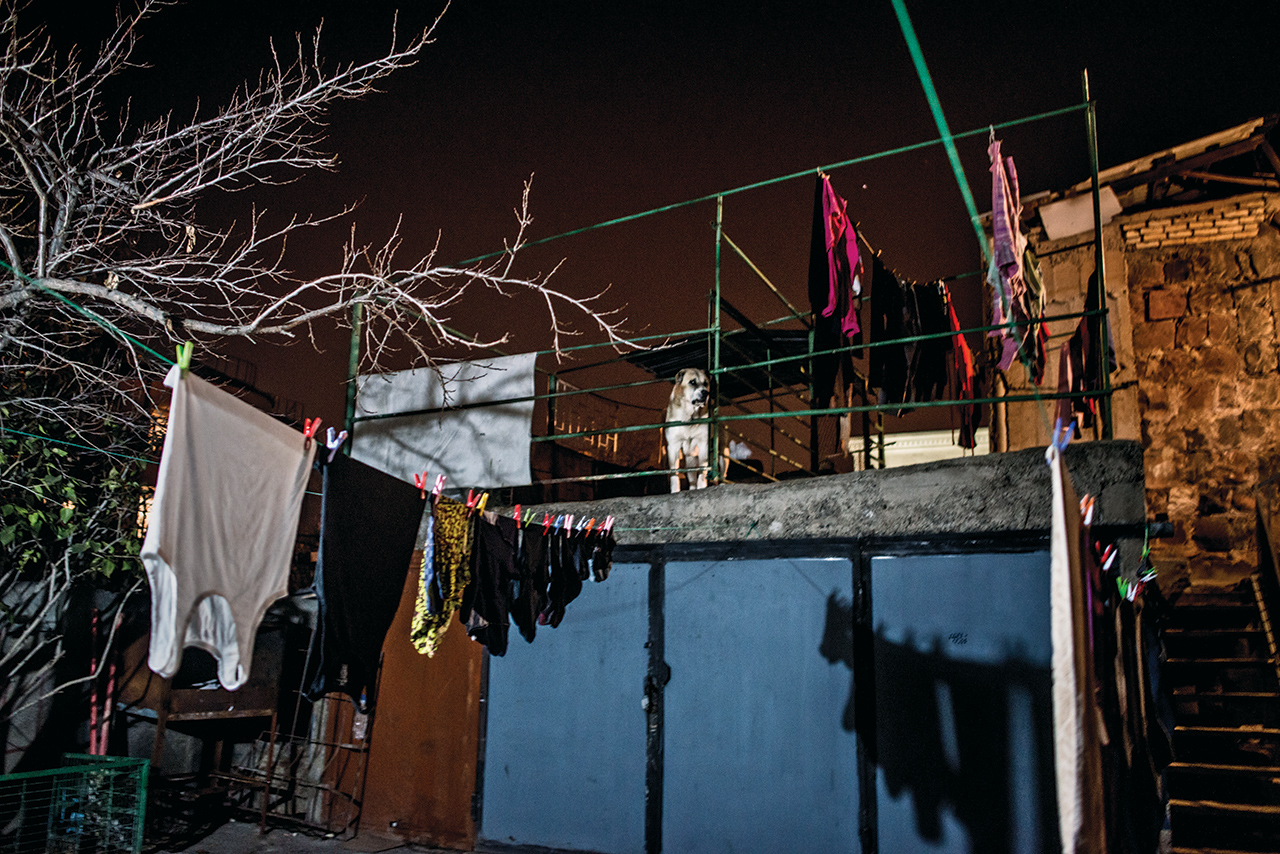 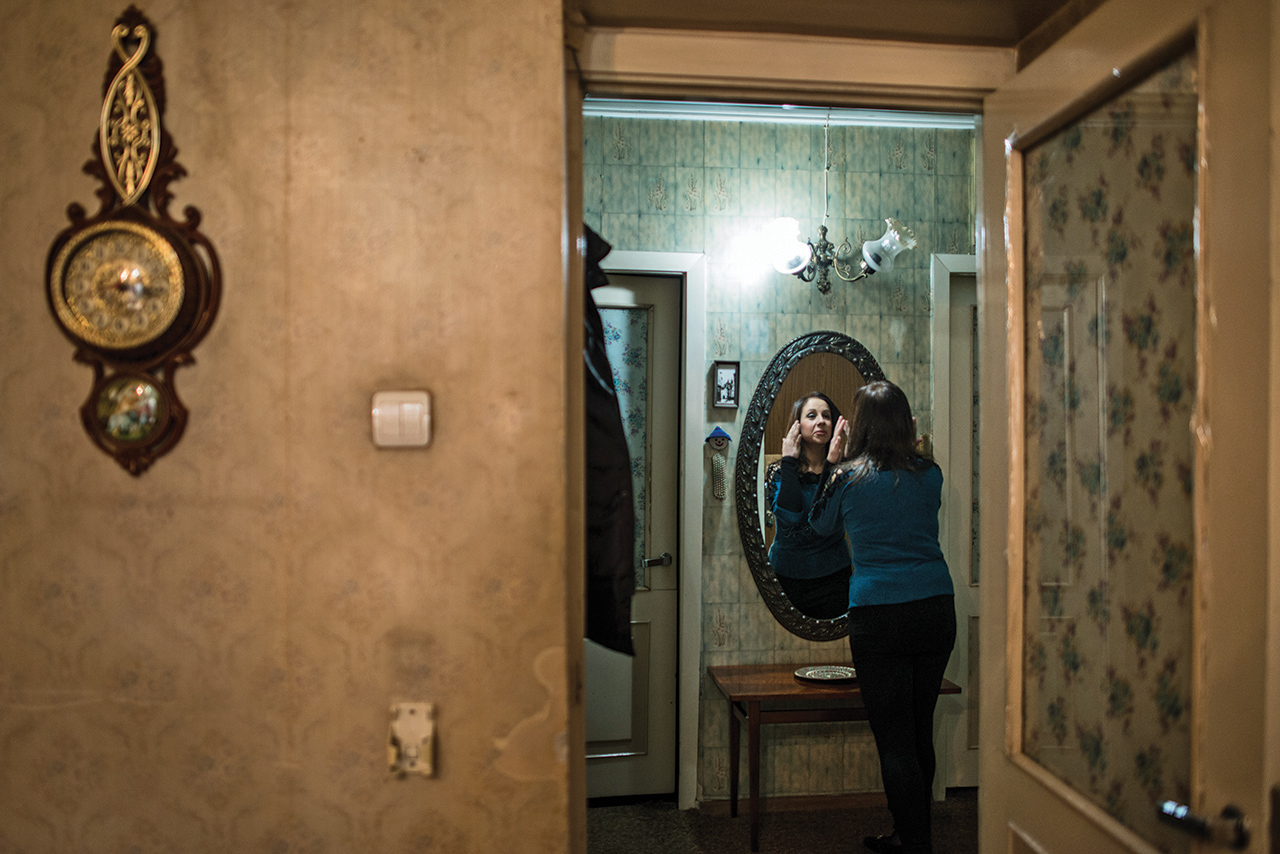 Photos of Manush Moses, 41, and Soghomon Amseian, 48, on their engagement day in 2002. The pictures were developed in Soghomon’s family studio. When they fled Syria’s eastern city of Deir Ezzor in 2013, Soghomon didn’t have time to get his camera.

Aram Tomassian, 15, sits in the kitchen of his family's rented apartment in Yerevan. After he arrived in Armenia from the refugee camp in Suruc, his only thought was of going back to Kobane, Syria, and reopening his father's auto mechanic garage.

Khachig Manuel rests in the living room of his rented house in Yerevan. On the wall above him is his engagement photo — his only remaining possession from Syria.

Maral Tomassian, 11, fled the Syrian town of Kobani with her father and three brothers in 2014. Maral has been going to school and has learned the local dialect, integrating herself to life in Armenia.

Shant, 14, Mike, 8, and Maral, 11, are three of the four children of Serop Tomassian, a single father from Kobani who arrived in Armenia in 2015. Mike, traumatized by his experiences during the war in Syria, does not speak, sometimes refuses to eat, and attends art therapy sessions to help him recover. Maral is the only girl in the family and does most of the housework.

Ilona and her four children moved to Armenia in 2015. Earlier that year, her husband was killed by Islamic State fighters; their son Aram witnessed the shooting. The bicycle in the middle of Aram’s room is a dream come true for the 15-year-old, who is having a difficult time overcoming the trauma.

A Christmas decoration glitters in the room of a rented apartment in Yerevan. Karoline Giragossian crafted the picture by hand in her hometown of Tal Abyad in northern Syria. She and her husband arrived in Armenia in late 2016 after he was injured by an explosive device planted in his car by Islamic State fighters.

Shant Klzy Muradian, 21, came to Yerevan two years ago and soon began to work as a cook in a club. He lived in an Armenian neighborhood in Aleppo and fled because he did not want to serve in the Syrian army. He says he feels more freedom in Armenia, since his family is not around and he is the one responsible for himself.

Two years after fleeing Deir Ezzor, Manush and Soghomon brought their family to Armenia. Before the family was displaced, Soghomon owned a photo studio in Deir Ezzor. Now, he works part time in the furniture-making business, and Manush has taken a job as a cook at a school. For this family, life here has been difficult, and they are thinking of leaving Armenia.

Laundry hangs on a line in the backyard of the apartment where Mari Kilejian, 41, and Khachig Manuel live. They were among the last Armenians to flee the northern Syrian city of Kobani in 2014 when Islamic State forces attacked the surrounding area. Their car broke down en route to the bordering Turkish town of Suruc, and they had to walk within range of fighting the rest of the way to a refugee camp.

Aline Kassabji, her husband, Vahram Der Ohanian, and their son arrived in Yerevan from Aleppo in September 2014. They opened a sandwich shop in the Armenian capital, continuing a business that Vahram had worked in since he was a teenager. Aline prepares the sandwich ingredients at home.

A version of this article originally appeared in the March/April 2017 issue of  FP magazine. Subscribe to FP Premium to receive the print edition.

Anush Babajanyan is a photojournalist based in Armenia.
Anna Kamay is a project manager in Armenia.

Who Owns the Earth’s Lungs?

The battle to save the Amazon goes beyond Brazil.