U.S. Suddenly Bans Laptops and Tablets on Some Middle Eastern Flights to America

DHS won’t talk about the rationale for the drastic change to existing policy.

The United States is banning many common electronic devices from the cabin on inbound and outbound flights on more than a dozen Middle Eastern and African airlines. It’s not clear whether the ban reflects concerns about an imminent security risk, but it is making waves among big carriers that fly to and from the United States.

On Monday, Royal Jordanian Airlines abruptly announced on Twitter that it received “instructions from the concerned U.S. departments” that passengers can’t carry any electronic devices bigger than a cell phone onto its flights into or from the United States. The tweet was deleted several hours later. 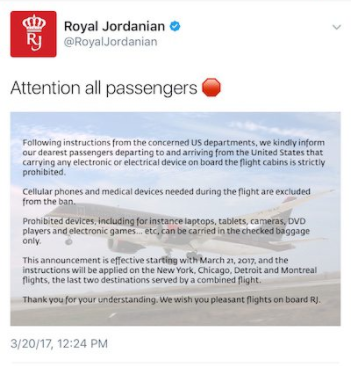 Devices including laptops, tablets, cameras, and DVDs can only be put in checked bags. Medical devices and cellphones were exempted. The ban comes into effect starting March 21 and airlines are expected to comply within 96 hours.

A public relations executive for Saudia Airlines, the Saudi Arabian national carrier, tweeted that U.S. authorities ordered the directive for passengers from 13 countries, but he didn’t specify which ones:

Royal Jordanian Airlines didn’t specify which U.S. departments instructed this ban, or specify whether the ban was temporary or permanent.

A spokesperson for the Department of Homeland Security didn’t deny there is a directive, but declined to comment. “We have no comment on potential security precautions, but will provide an update when appropriate,” spokesperson Gillian Christensen told Foreign Policy.

The Guardian reported that the the U.S. Transportation Security Administration, which oversees security at airports, distributed a confidential circular Monday to airlines from 13 nations, requiring passengers to check laptops, iPads, Kindles and cameras larger than cell phones. It is unclear which airlines are affected.

A U.S. official told CNN the directive would be for a limited duration, applies to some Middle Eastern and African countries, and is meant to ensure extra security measures at specific airports.

“This story is very much still developing,” air travel expert Ben Schlappig, who runs the One Mile at a Time travel blog, wrote. “However, what seems certain is that Royal Jordanian wasn’t misinterpreting some policy, but rather there’s some intelligence that’s about to change travel for a lot of people.”

Royal Jordanian has trolled Trump in the past. In February, after a federal court temporarily froze the travel ban he ordered, the airline turned the ban into fodder for a cheeky advertisement.

“Fly to the US with RJ now that you’re allowed to,” the ad read, along with a headline that crossed out “Ban” to say “Bon Voyage!”

America Is About to Enter its Years of Lead

Why the United States Shouldn’t Sell Jets to the UAE

U.S. at Risk of Being Outpaced by China, a New Intel Committee Report Finds