Infographic: How Does U.S. Health Care Stack Up to the Developed World?

Healthcare was the hot item du jour in Washington Friday, as the Trump administration forced a vote in the House of Representatives on a miserably unpopular new health bill. As of Friday afternoon, they’re expected to scrap the vote — House Speaker Paul Ryan (R-Wisc.) warned President Donald Trump it would lose — and it will be a political headache for a party that has spent the last seven years waiting for the vote, but apparently forgot to prepare for it.

While the battle plays out on the Hill, here’s a snapshot of how the U.S. healthcare system stacks up against the rest of the world’s. (It’s not pretty.)

First, the United States spends twice as much per-capita as other developed countries on average, and nearly three times as much as the average for countries in the Organization for Economic Cooperation and Development. U.S. citizens spend an average of $9,024 a year on healthcare, compared to an OECD average of $3,620 according to the OECD’s data on healthcare from 2016. A chart from the Peter G. Peterson Foundation shows the disparity:

But spending more money on health care must mean better health care, right? Wrong again. Numbers from online publication OurWorldInData.org show the United States is a stark outlier in life expectancy vs. healthcare expenditure over time — and not a good kind of outlier. 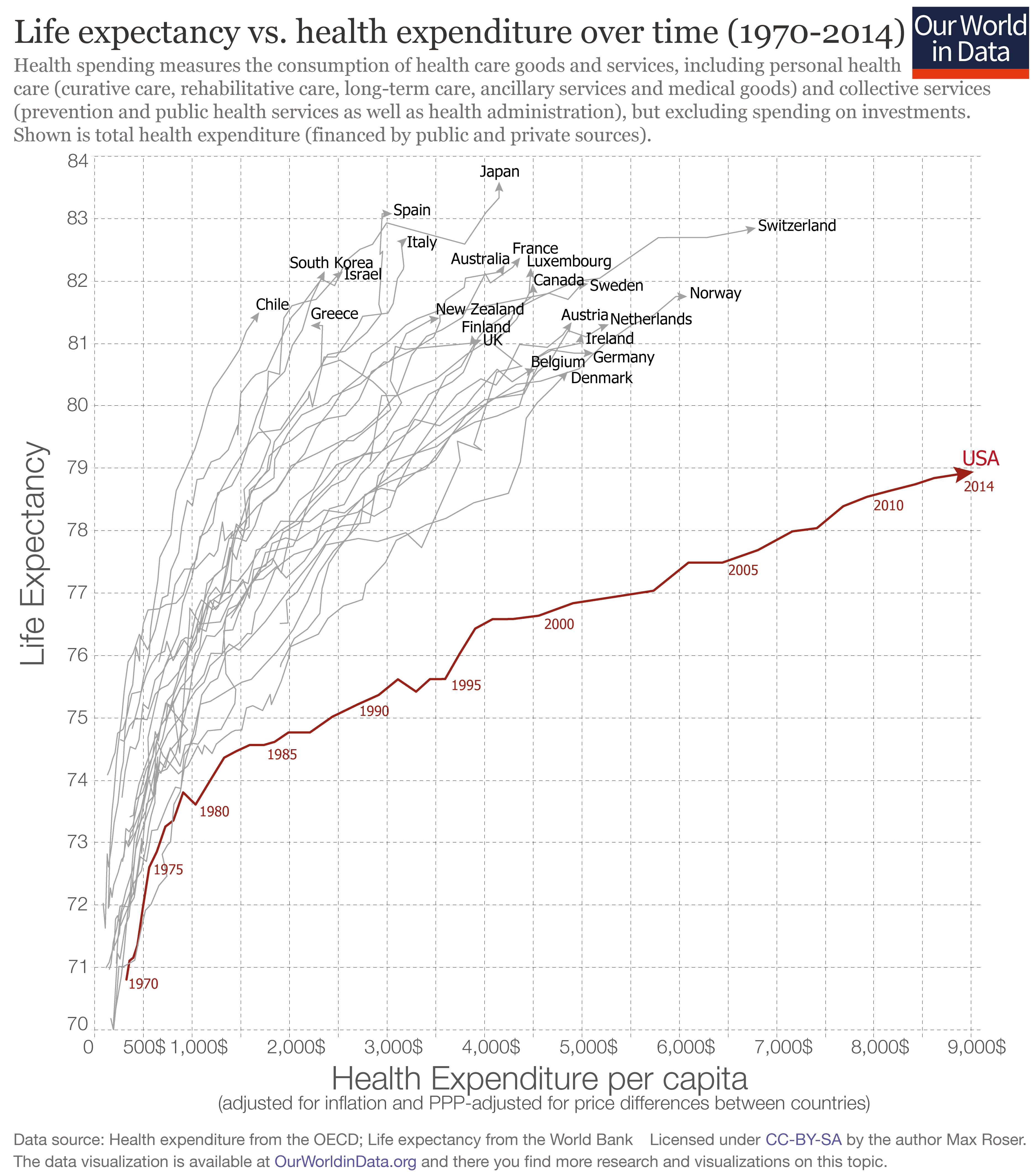 The United States is also the only industrialized country in the world not to have paid maternity leave — a statistic some U.S. lawmakers lambast. “Our policies are stuck in the Mad Men era,” said Sen. Kirsten Gillibrand (D-N.Y.). “We are the only industrialized nation that does not guarantee workers paid family leave. Many women can’t even get a paid day off to give birth.”

The dismal healthcare outlook jumps the gender divides, too. Mortality rates have skyrocketed for white American males, who comprise the biggest reservoir of Trump’s political support. A Brookings Institute study released Thursday revealed a “a shocking increase in midlife mortality” due to an uptick in “deaths of despair” — or deaths by alcohol, drug abuse, or suicide. For men with a high school degree or less, the mortality rates are up a staggering 130 percent from 1998 levels.