Yahya Jammeh has kept a low profile since he was run out of Banjul in January. FP finds him holed up at a luxurious villa in another African kleptocracy.

For a town of 7,000 in the middle of Africa’s densest jungle, Mongomo boasts an impressive list of attractions. Carved out of Equatorial Guinea’s virgin rainforest is a private airport, a football stadium that hosted games for the 2015 Africa Cup of Nations, a deserted three-lane highway leading to a “six-star” hotel in the nearby city of Oyala, and a new international-standard golf course, its pristine fairways cutting through the plant life that encroaches everywhere else.

The Presidential Golf Course is named in honor of Teodoro Obiang Nguema, the country’s long-standing dictator and self-styled “Guarantor of Peace and Propeller of Development,” who has a well-documented record of jailing and torturing political opponents. Backed by his country’s vast oil wealth, Obiang, who grew up in Mongomo when it was a rural backwater, has spent the past few years turning the area into a vanity project.

But, for the moment at least, opportunities to bask in Mongomo’s faux grandeur seem mostly to be enjoyed not by Obiang, but the former president of another African country who took up residence in Equatorial Guinea after being deposed earlier this year. An investigation by Foreign Policy suggests that former Gambian President Yahya Jammeh, whose own record of corruption and abuse is being scrutinized by his successor’s administration, has been using Obiang’s personal sanctuary as a sanctuary from Gambian law.

After his brutal, 22-year reign came to a spectacular end in January, Jammeh was welcomed by Obiang, whose country is not a signatory to the statutes of the International Criminal Court. Jammeh had lost an election in December, conceded defeat, but then refused to step down. He finally fled Gambia on his presidential jet on Jan. 21 as troops from the Economic Community of West African States (ECOWAS) massed on the border, threatening to oust him by force.

Since then, little has been heard of the ex-Gambian dictator beyond claims from the country’s new government that he took $11 million from state coffers and a fleet of luxury cars as his parting shot. His arrival in Equatorial Guinea was greeted by near-silence in his new homeland, save for a single protest banner reportedly unfurled in Malabo, the country’s island capital. Hung outside the offices of Convergence for Social Democracy, Equatorial Guinea’s tiny and much-harassed opposition party, it declared, “We do not want another dictator in our country.” Police later tore it down.

But while Jammeh may be keeping a low profile — a difficult adjustment, perhaps, for someone used to having his portrait plastered everywhere — FP has narrowed his likely whereabouts to one of Obiang’s presidential palaces in Mongomo. “Obiang has three palaces in Mongomo — all big, gaudy-looking places like Saddam Hussein had,” said Tutu Alicante, a human rights lawyer from Equatorial Guinea, who now runs EG Justice, a Washington-based human rights group. “We’ve heard from contacts that Jammeh is in one of them.” 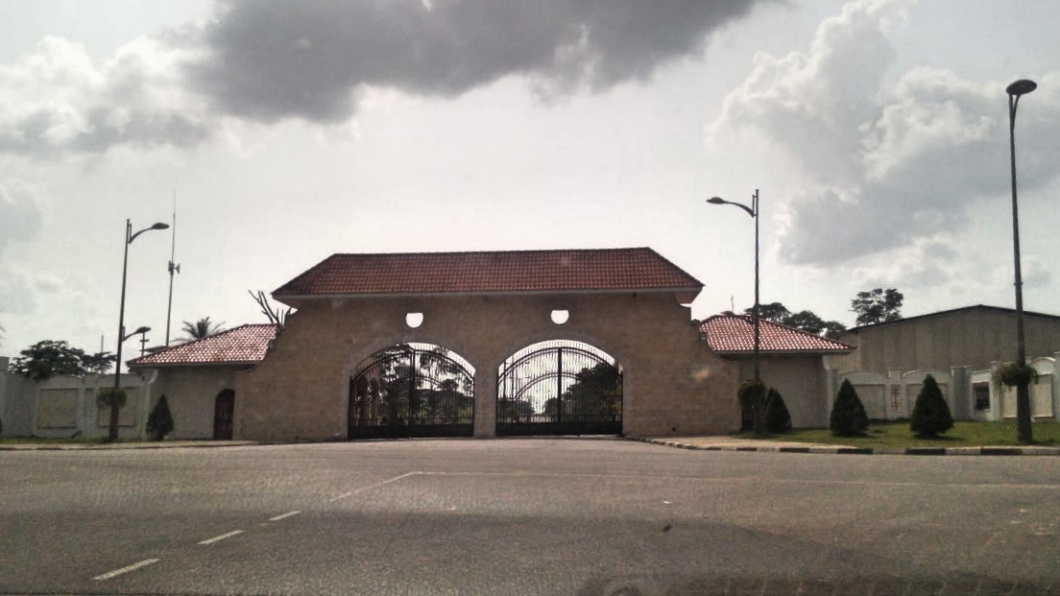 The entrance to one of Obiang’s villas in Mongomo. (Photo credit: EG Justice)

A diplomat in Malabo independently confirmed that Jammeh is in an “Obiang-owned villa” in the region of Oyala and Mongomo while several nongovernmental organizations and human rights groups indicated that they viewed Alicante’s intelligence as credible.

Earlier this month, the French publication Jeune Afrique reported that Jammeh had requested land to farm in Equatorial Guinea, something he had planned to do in retirement in Gambia, where he owned a large farm in his hometown of Kanilai. According to Alicante, land has been set aside for him in the Moka Valley, a picturesque tract of mountains and waterfalls which, like Mongomo, is away from Equatorial Guinea’s oppressive coastal humidity. “The ruling family already [has] land here themselves, and they’ve given a chunk to him,” he said. It’s unclear whether Obiang intends to farm eventually or if he will continue to live in Mongomo.

To date, Jammeh and Obiang have not been seen playing rounds of golf, but an unauthenticated photo that emerged this month shows the two admiring what appears to be Jammeh’s new farm. They previously had a cordial relationship, with Obiang making a state visit to Gambia in 2013. They have also been neighbors before, owning adjacent mansions in the wealthy suburb of Potomac, Maryland, according to The Washington Post. 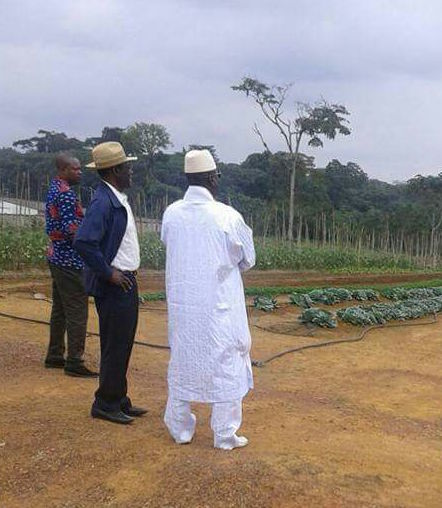 An unverified photo shared widely on social media shows Jammeh and Obiang admiring what appears to be Jammeh’s new farm in Equatorial Guinea.

But they have more in common than expensive second homes. Both spent decades in office after seizing power in coups. Jammeh ruled for 22 years while Obiang, who has been in office since 1979, is now the world’s longest-serving president. And both have had coup attempts launched against them, which helps explain why Obiang is building Oyala, described by the diplomat in Malabo as “an entire new city carved out of nowhere.”

In February, the country’s entire administration officially relocated to Oyala from Malabo, despite the new city remaining unfinished. Like Naypyidaw in Burma, it’s designed to be an alternative capital for the regime to hole up in during an uprising from within or a coup attempt from without. As Obiang put it in a rare BBC interview in 2012, “We need a secure place for my government and for future governments.”

In a region where deposed dictators can quickly find themselves in search of retirement homes, Obiang seems to have recognized that his personalized capital can give him diplomatic power. “I think he saw that Jammeh was behaving outrageously badly and that there was a chance to help out,” said Simon Mann, a former mercenary who tried to overthrow Obiang in the infamous Wonga Coup of 2004, and whom Obiang later pardoned from a 34-year jail sentence in 2009. Mann added that like his old friend and mentor, the late Libyan leader Muammar al-Qaddafi, Obiang’s fearsome reputation is partly the result of an act. In person, he said, Obiang is “pleasant” and has a philanthropic side.

But there are those who are determined to force Obiang to reverse his most recent act of pan-African philanthropy. Gambian lawyers and human rights activists have already launched a campaign to extradite Jammeh and force him to stand trial at an international court. Gambia’s new president, Adama Barrow, has been coy about whether Jammeh should be put on trial, wary of being seen as prejudging his predecessor’s guilt. But the new president has pledged to form a truth and reconciliation committee to investigate crimes during the Jammeh era, and his police force is reportedly looking into the cases of at least 30 people who disappeared or were killed under the previous government.

Last month, the head of Jammeh’s intelligence agency, Yankuba Badjie, also appeared in court along with nine other officers accused in last year’s slaying of Solo Sandeng, an opposition leader who died in government custody. A fortnight after their court appearance, Sandeng’s body was found in an unmarked grave. Police had reportedly been informed of his whereabouts by one of the accused, the agency’s operations director, Saikou Omar Jeng.

Gambian officials say now that Jammeh’s former henchmen are facing murder charges, they may directly point to him. In Sandeng’s case at least, Jammeh can hardly claim ignorance. Last year, when both Amnesty International and the United Nations called for an investigation into Sandeng’s death, Jammeh famously told them to “go to hell.” In words that may one day come back to haunt him, he said it was “common” for people to die in custody in Gambia.

But building a case against Jammeh is far from the only obstacle. Even if Barrow were to call for his extradition back to Gambia, Obiang is under no obligation to comply. The only thing that is likely to sway him, regional analysts say, is pressure from the regional bloc that ousted Jammeh.

“Our job is to persuade both ECOWAS and CEEAC [the central African equivalent] to get Obiang to relinquish Jammeh,” Alicante said. “If we Africans don’t force our leaders to push for accountability, I doubt anything is going to happen.”

Such a push would have to focus on the bigger regional players like Nigeria and Ghana, since many of Obiang’s neighbors — like Benin and the Central African Republic — are too dependent on his oil largesse to kick up much of a fuss. That may prove easier said than done, since Jammeh is seen as a relatively minor thug by global standards and the region is awash with more pressing problems. The diplomatic hassle of convening a regional court to try him may not be deemed worth it, especially when putting him in the dock could reopen old wounds at home.

“There is no will in ECOWAS to prosecute Jammeh right now,” said Alex Vines, head of the Africa program at Chatham House, a think tank in London. “The sense is right now that Gambia needs stability.”

Things might change, of course, if Obiang, now 74, were to die or step down. And given that Jammeh is only 51, that is likely to happen during his lifetime. The presumed heir to power is Obiang’s playboy son, also Teodoro, already notorious for having a fleet of luxury cars seized as part of a Swiss corruption probe.

But while Teodoro is already vice president and thought to be eager to take over, that could be the moment when the regime finally wobbles, according to the Malabo-based diplomat. “He is totally unsuitable for the role, so the main concern is what happens when the old man disappears,” he said.

Of course, even a non-Obiang in charge in Equatorial might still look kindly on Jammeh as a long-term tenant farmer. But equally, a new leader might decide that handing him over would be a good way to repair the country’s image in the wider world. For that reason, some analysts suggest, Jammeh should not get too comfortable in Obiang’s palace.

“A prosecution may only come in the long term, after the truth and reconciliation committee plays out, but I think the new government in Banjul will pay attention to those campaigning for it to happen,” says Jeffrey Smith, executive director of Vanguard Africa, an American pro-democracy NGO. “I wouldn’t be surprised if ultimately one day we see Jammeh in handcuffs.”

Colin Freeman is a British freelance journalist and former chief foreign correspondent for the Sunday Telegraph. He is the author of "Kidnapped: Life as a Somali Pirate Hostage."
View
Comments
Tags: Africa, Equatorial Guinea, Exclusive, Gambia