It’s quite a time for consolidated authoritarian regimes!

The pendulum is swinging toward autocracy and repression in Central Asia and Central Eastern Europe, according to the new Freedom House rankings of nascent democracies from postcommunist Europe and Eurasia.

Freedom House’s Nations in Transit 2017 Report covers 29 countries, stretching from Central Eastern Europe to Central Asia. For the first time since 1995, the number of so-called consolidated authoritarian regimes outweighs the number of consolidated democracies. The former are your classic repressed societies in which dictators rule with an iron fist, quashing dissent without regard for civil rights, while the latter are the most democratic regimes. (More about the methodology can be found here).

Azerbaijan, Belarus, Kazakhstan, Kyrgyzstan, Russia, Tajikistan, Turkmenistan, and Uzbekistan are all consolidated authoritarian regimes, according to this year’s report. This is the first time Kyrgyzstan has been considered such since 2011, the year it held competitive parliamentary elections (it moved out of the category the following year). This means, of the countries in the report that were once in the Soviet Union, only Armenia, Georgia, Moldova, and Ukraine don’t carry the worst-kind-of-regime status. That isn’t to say those four all had top marks. For example, Armenia, like Kyrgyzstan, switched from a presidential to a parliamentary system in 2016, a move that will “make political change harder to achieve,” according to the report.

But it isn’t only a post-Soviet problem. Since 2007, eleven EU members or candidates have seen their democracy scores decrease. 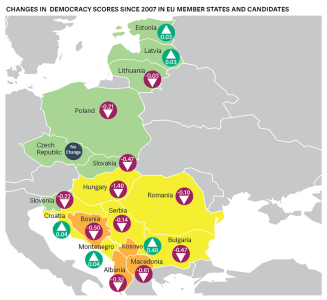 In fact, Central and Eastern Europe saw its largest democratic decline since the financial crisis in 2008. Hungary scored worst  in the region, and Poland scored worse than it had in Nations in Transit report history. In the Balkans, four countries’ democracy scores dropped.

Meanwhile, the three Baltic states, which have been among the top five most democratic countries since 2005, may be set to see stagnation.

There is many an argument one could make for all of this. The EU is an imperfect actor. Illiberalism, as one segment of the report examines, has moved into the mainstream in certain countries. There are various pressure points — for example, Nagorno Karabakh and Eastern Ukraine — that threaten regional stability. Central Asia’s long-serving leaders aren’t willing or ready to reform their countries or give up power just yet, and outside conditions haven’t yet forced them to do so.

And the news, of course, may not be as bad for democracy as this piece might make one think. As this Nations in Transit report makes all too clear, political patterns aren’t set in stone, and times do very much change.

Emily Tamkin is the U.S. editor of the New Statesman and the author of The Influence of Soros, published July 2020. Twitter: @emilyctamkin