Three explosions hit a bus carrying soccer team Borussia Dortmund (BVB) on April 11 in Dortmund, a city in northwestern Germany, as the team was preparing to play a European match. No one was killed in the blasts. Investigators are now focusing on two suspects, whom they believe may have ties to Islamists.

Pipe bombs with a range of about 100 meters were hidden behind hedges, detonating as the bus passed by shortly after leaving the team’s hotel.

“After the bang everyone in the bus got their heads down,” one Dortmund player told a Swedish newspaper. “We didn’t know whether there would be more. The police arrived quickly, sealed everything off. We are all in shock.”

Marc Bartra, a Dortmund defender from Spain, sustained injuries including a broken wrist. 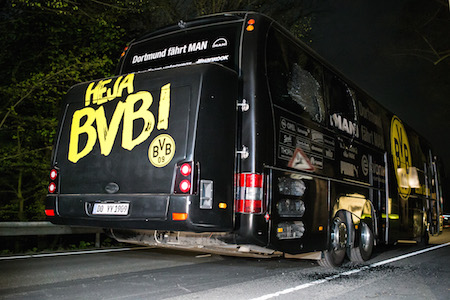 Several letters were found at the scene claiming responsibility for the attack and referring to German military efforts against the Islamic State. Frauke Koehle, a spokesperson for the federal prosecutor, said that “two suspects from the Islamist spectrum have become the focus of our investigation,” according to the Telegraph. The Islamic State has not officially claimed responsibility for the attack.

Rukmini Callimachi, the New York Times correspondent who focuses on the Islamic State, posted on Twitter that the letters contained linguistic anomalies that distinguish it from previous Islamic State communications, but she emphasized that the attack could still have ties to the self-proclaimed caliphate that has claimed responsibility for several attacks on European soil over the past year.

Shortly after the bombing, fans gathered in the stadium where the BVB-Monaco match was to have been held and chanted “Dortmund!”

The Champions League match against AS Monaco was postponed a day. Ahead of the match, fans lined the streets holding posters in solidarity.

Germany has been on edge since December, when an attacker killed 12 people when he drove a truck into a crowd of pedestrians at a Christmas market in Berlin.

The Far-Right Is Going Global

Trump Set to Speak at Davos as Impeachment Trial Begins

How Scared Should You Be of The Wuhan Coronavirus?