France’s Election Is Trump vs. Merkel vs. Modi vs. Corbyn

The French are still undecided — and, increasingly, the rest of the world is, too.

When she launched her campaign for president of France earlier this year, Marine Le Pen, leader of the far-right National Front Party, reminded a jam-packed crowd of 3,000 activists of “the two totalitarianisms” she had pledged to fight: “Islamism” and “financialism.” In the face of this “civilizational choice,” Le Pen solemnly pledged to “defend the outer walls of our society.”

The French go to the polls on Sunday. According to the most recent polls, Le Pen is one of four candidates who have a chance to finish in the top two and thus contest the runoff on May 7. If you made a matrix with Le Pen’s two master issues — national identity and globalization — along the side, and the two essential responses — “liberal” and “anti-liberal” — along the top, you would find that each of the four candidates fill one of the resulting boxes. 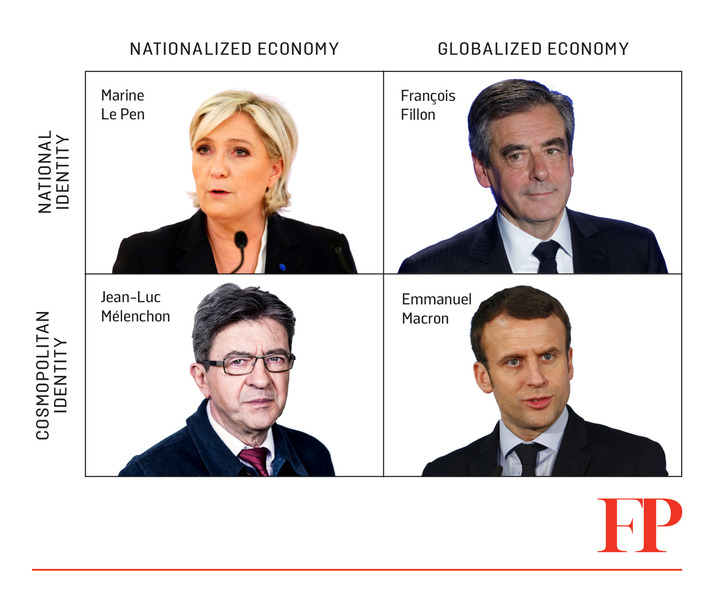 Le Pen’s chief rival, Emmanuel Macron of En Marche!, is liberal on both counts; François Fillon, the Republican candidate, is illiberal on identity and liberal on the economy; and Jean-Luc Mélenchon, the leader of the far left La France Insoumise, is the opposite. Astonishingly, then, on the eve of the election French voters are almost equally divided among the four cardinal positions on the great issues of the day.

This is clarifying. After the shock of Brexit and the election of Donald Trump, there is a natural tendency to imagine that the Western world has been divided into great camps — the illiberal governments of Eastern Europe and the United States whose programs resemble Le Pen’s, versus the Macroniste liberal regimes of Western Europe. But beyond those frontiers lie Filloniste democracies like India and Turkey, increasingly nationalistic but nevertheless eager to exploit the benefits of globalization. Meanwhile, analogues of Mélenchon’s (or Bernie Sanders’) anti-globalization left have managed to reach national power only in Greece, with Syriza, but such parties are riding a wave of popularity in southern Europe, including Italy and Spain.

The future may belong neither to the pure liberals nor the pure illiberals; the convulsion that has upended the politics of the West is still in its early years. The French election hardly exhausts the possibilities, but it does show that we need to think beyond our binary categories.

Let’s start with culture and national identity. Unlike in Germany, Sweden, and Hungary, where the refugee crisis has suddenly provoked fears that traditional identity is under siege from a wave of alien newcomers, culture has been contested terrain in France, and in French politics, for well over a decade. As in the Netherlands (which I wrote about last month), politicians have made hay by exploiting fears that immigrants, above all Muslim immigrants, do not integrate into the national culture, cluster in ghettos, commit crimes, and of course carry out terrorist acts. Trump’s electoral victory put to rest any lingering questions about the effectiveness of this political strategy.

This is Le Pen’s wheelhouse. She has called for restricting immigration to 10,000 per year, or about 5 percent of the current annual total. She has railed against “communitarianism,” the French term for group identity. She has trained her fans to shout “On est chez nous!” — “It’s our home!” — in response to red-flag words like “foreigner” and “Islam.” She also wants to withdraw from the European Union and the euro. For Le Pen, everything not-French is a threat to the French; the more not-French, the greater the threat.

Fillon, the center-right candidate, plays these notes in a more muted vein. All serious French candidates write a campaign book, and sometimes more than one; Fillon titled his Defeating Islamic Totalitarianism. “France doesn’t have a problem of religion,” he wrote. “It has a problem connected to Islam.” He has called for a new form of “administrative control” of French mosques, and would change the French Constitution to permit legislators to assign an annual immigrant quota, including country-specific quotas. The United States has long maintained just such a system, but it violates Article 1 of the French Constitution, which guarantees equality before the law irrespective of national tradition. Blatant appeals to France’s threatened Christian culture helped lift Fillon over his primary challenger, Alain Juppé, who bravely — and unsuccessfully — raised the banner of a French “identité heureuse,” or positive identity.

Though he has endured a good deal of mockery for his unwillingness to commit himself on controversial subjects, Macron has shown real courage on questions of immigration and identity. In the aftermath of the December 2016 terrorist attack on the Christmas market in Berlin, which left critics of Germany’s open-door refugee policy feeling vindicated, Macron took to the pages of Le Monde to proclaim that German Chancellor Angela Merkel and German society “have saved our collective dignity by welcoming refugees in distress, by housing them and by training them.” He has heaped scorn on Le Pen for seeking to divide the French against themselves. He is a passionate advocate of the EU. Macron is the candidate of the identité heureuse.

Mélenchon, a former Trotskyist, arrives at a cosmopolitan vision from a base of Marxist universalism. He urges his followers, as I heard him do in one speech, to stand up for “those dying abandoned in the streets, those driven to suicide at work, those drowned in the Mediterranean.” In the candidates’ debate in late March, he insisted that the French tradition of laïcité “must not serve as a pretext to attack Muslims,” and mocked Le Pen’s campaign against the veil by suggesting a clothing police to arrest people with green hair or women with short skirts.

But openness toward other peoples, religions, and tongues does not dictate openness toward trade and capital from beyond the border. On such matters, Le Pen and Mélenchon find much to agree on. Where the former speaks of “financiarisation,” the latter, more picturesquely, flays “the financial funds which are parasites and leeches on the productive body.” (Le Pen is not above the anti-Semitic dog whistle, as when she pointedly refers to Macron as “the candidate of the Rothschild Bank,” where the leader of En Marche! once worked. Mélenchon does not descend to such calumny.) Both despise labor reforms designed to make it easier for French companies to hire and fire employees. Both lavish obloquy upon the regime of austerity dictated by the EU. Both oppose free trade and believe, along with Trump, that the national economy would somehow flourish behind protectionist walls.

After standing aside during a feverish debate about France’s 35-hour workweek, Le Pen said drolly, “I didn’t want to intervene in the ultraliberal debate” between Macron and Fillon. She’s right to say that the two are outliers in French terms. Fillon writes on his website, “I want to finally break the lock of 35 hours. This utopia, which has remained a French exception, must be abandoned.” Macron proposes allowing individual companies to negotiate a longer workweek. The 2014 “loi Macron,” named after the then-minister of the economy, made it slightly less cumbersome for employers to fire workers and eased the rules around Sunday opening for retailers, among other things. The law has made Macron a reviled figure on the left. Fillon and Macron propose to further liberalize work and retirement rules, both want to cut corporate taxes, and they are free traders in a country that regards globalization with deep suspicion. However, Macron, an ex-socialist, focuses more on strategic government investment and Fillon more on budget-cutting; Macron favors a stronger EU, while Fillon caters to widespread public contempt for European governance.

Despite their reputation for Cartesian habits of thought, the French are not going to actually choose a candidate on Sunday based on categorical distinctions. Never before have so many voters remained undecided so close to Election Day; many will be making choices based on a strategic calculus rather than an assertion of preference. That calculus is: How can I prevent Marine Le Pen from becoming president of France? Le Pen’s nationalism is far more radical than Fillon’s, and her economic policy even more ruinous than Mélenchon’s. Recent revelations that some of Le Pen’s closest advisors are Nazi sympathizers have only ratcheted up fears of a National Front victory. Voters on the left are racking their brains over the ideal strategy to keep that from happening.

The likeliest beneficiary of the so-called vote utile is Macron, whom moderate leftists and moderate conservatives both feel they can live with. Macron is young, handsome, dynamic, and feels more like the future than his rivals. Nevertheless, it’s very strange to contemplate the possibility that French voters, traditionally hostile toward the free market, and deeply worried about terrorism and “communitarianism,” may choose a genuine liberal as president. Macron may find that he has very little ability to bring his citizens to a more classically Anglo-American worldview, especially when the Anglo-American world is heading in the opposite direction. He could be a president without a mandate.

There are good reasons why three of the four viable candidates have rejected central elements of the liberal consensus — even if in doing so they have mined some of the public’s darkest instincts. The faith in free markets and free trade no longer speaks to a middle class that feels left behind by the forces of globalization. And the cultural universalism that welcomes refugees and immigrants has run into the reality that many Muslims do not accept the secularism and the progressive values of the West, even if only a minute fraction of them actively seek to harm those values. Thus it is not enough to repeat the shibboleths of the triumphal post-Cold War moment. Le Pen likes to say that the great struggle of our time is between “mondialisation” and “patriotisme.” Liberalism must find a language, and a set of policies, to pry patriotism from the clutches of the nationalists and the xenophobes. A cosmopolitan identity, or even a European one, is too flimsy a garment for most people to wear. The real struggle of the future may be the effort to define an affirmative patriotism. French voters will join that struggle on Sunday.

James Traub is a regular contributor to Foreign Policy, a nonresident fellow at New York University’s Center on International Cooperation, and author of the book What Was Liberalism? The Past, Present and Promise of A Noble Idea.