Eight of the Weirdest Gifts Foreign Dignitaries Gave the President

From ping pong tables to crocodile insurance, a rundown of the strangest gifts foreign leaders gave the leader of the free world.

U.S. President Donald Trump hosted Argentine President Mauricio Macri at the White House Thursday. The two had a cordial visit, but it couldn’t have gone as well as their predecessors’ meet-and-greet in 2003, when Argentina’s then-President Nestor Kirchner presented former President George W. Bush with 300 pounds of lamb meat.

Being the U.S. president comes with a lot of perks besides free limo rides, fancy dinner parties, and your very own nuclear football. But another, lesser-known upside are all the cool presents. Foreign dignitaries present presidents with gifts when they meet, and the president returns the favor in kind. It’s an important diplomatic gesture of any visit.

Unfortunately, presidents can’t keep most of the good swag they get: Government regulations prevent any federal government employees — yes, including the president — from accepting gifts over $390. So there’s an entire diplomatic choreography around it.

The president accepts a gift both he and the gift-giver know he can’t keep and, of course, thanks the visitor profusely. Then, a small obscure office in the State Department, the “Protocol Gift Unit” quietly takes the gift and passes it onto the National Archives. The Archives in turn estimates the gift’s value, logs it into public record, and stores the gift for safekeeping. Many await display in the president’s future library after he retires.

They’re usually books, jewelry, paintings, or framed photos. But some are more extravagant — and bizarre. Here are some of the best and weirdest presents that U.S. presidents received in recent years:

A jewel-encrusted sword: Former President Barack Obama got a three-foot long sword encrusted with gold and rubies courtesy of the crown prince and deputy prime minister of Saudi Arabia, Mohammed bin Naif bin Abdulaziz Al Saud. But before you add this to your birthday wishlist, know the price: the National Archives appraised this one at a cool $87,900.

A ping pong table: In 2012, British Prime Minister David Cameron gave Obama a “custom Dunlop table tennis table with United States and United Kingdom decals, inscription, and paddles.” They even got to break in the table by playing some local British students, but it didn’t end well. “As they would say in Britain, we got thrashed,” Obama said.

Crocodile insurance: During a 2011 visit Down Under, the government of Australia’s Northern Territory presented Obama with crocodile insurance. It would’ve given Michelle Obama 50,000 Australian dollars if one attacked Obama. Presumably, his phalanx of heavily armed Secret Service agents could take out any crocs before they reached Obama. But better safe than sorry, right? “I have to admit, when we reformed health care in America, crocodile insurance is one thing we left out,” Obama said. Maybe that’s why Trump wanted to repeal it so badly.

A puppy: In 2006, Bulgarian President Georgi Purvanov inexplicably decided to give Bush a puppy. His name was ‘‘Balkan of Gorannadraganov” (Balkan for short). The federal registry report listed Balkan under “miscellaneous” gift option and estimated his value at $430. Bush couldn’t exactly keep him, but couldn’t store him at the National Archives either. So he reportedly bought Balkan from the government and gave him to a family friend in Maryland, where he presumably led a happy, carefree life. (Another useful gift the Bulgarian leader gave Bush: a book, in Bulgarian, titled The Leadership Genius of George W. Bush.)

A taxidermic lion and leopard: President of Tanzania Jakaya Kikwete gave President Bush a stuffed lion and leopard in 2008. Because what Oval Office is complete without these? But sadly, he had to follow protocol and hand them over to the National Archives.

Roller blades: 2008 was apparently a big year for Bush in the gift-getting department. In addition to the taxidermic wildlife, he got a pair of sweet black roller blades from then-Dutch Prime Minister Jan Peter Balkenende. Balkenende threw in some complimentary wrist guards, knee pads, and elbow pads to make sure Bush was safe next time he bladed around the West Wing, which is really diplomatic of him. (No word if Bush actually did, but we’d like to think so).

A really awkward portrait on a carpet: The President of Azerbaijan Heydar Aliyev wanted to go above and beyond when he met President Bill Clinton in 1997. So he commissioned a carpet that depicted Clinton and his wife Hillary. And it’s … well, it’s something. 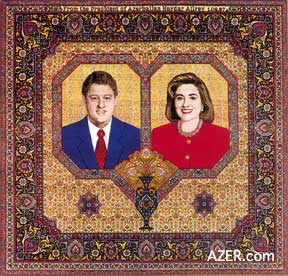 That’s likely the face they had when they first saw the gift. It would’ve looked great in the Oval Office, though.

A Komodo dragon. Somehow the leader of Indonesia decided the thing President George H.W. Bush needed most was a giant venomous flesh-eating lizard. When Bush Senior received the dragon, named Naga, in 1990, he regifted it to the Cincinnati Zoo, where it lived a busy and productive life (it fathered 32 baby Komodo dragons) before passing away in 2004. It’s slightly less cuddly than the Bulgarian puppy his son later received, but hey, it’s the thought that counts, right?