There’s Not Much to Celebrate on World Press Freedom Day

That countries around the world are cracking down on freedom of the media shouldn't be news, but, this year, it is.

Wednesday marks World Press Freedom Day, an annual date to honor journalists imprisoned or killed in the line of duty, and to take stock on press freedom around the world. And this year, there’s an especially awful lot to take stock of.

State censorship, governments imprisoning critics, and internet crackdowns and surveillance are all on the rise, which has led to an “upsurge in killings and imprisonment of journalists around the world,” according to the Committee to Protect Journalism. The CPJ’s 2017 “Attacks on the Press” report, released last month, tracked its highest number of jailed journalists around the world yet — 259 — and over 1,200 journalists killed on the job in the past 25 years, from Mexico to Russia to Iraq and Syria.

Freedom House, a Washington-based non-profit, publishes an annual report on world rankings of press freedom and 2017 looks equally bleak to them.

“The fierce attacks we have seen on factual reporting pose a danger to freedom of the press around the world,” said Michael J. Abramowitz, Freedom House president. He specifically called out the United States’ toxic political environment, where President Donald Trump and his top cadre of advisers labeled the press “the opposition party.” On Sunday, Trump’s chief of staff, Reince Priebus, confirmed they have looked at changing libel laws to make news organizations easier to sue.

“Vitriolic attacks on individual journalists and news outlets in the United States undermine our democracy’s status as a model of press freedom,” Abramowitz said. But there are bigger problems elsewhere. 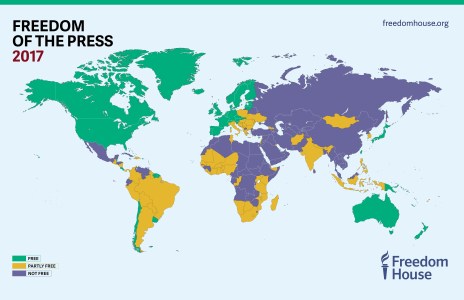 The report noted some of the starkest drops in press freedom occurred in Poland, Hungary, and Turkey — all members of Euro-Atlantic institutions like NATO and the EU that tout a free press as a core principle.

On Wednesday U.N. Secretary General Antonio Guterres called for “an end to all crackdowns against journalists — because a free press advances peace and justice for all.” But it’s not clear everyone’s listening.