As urbanization spreads, pollution threatens a precious natural resource at the outer edge of the metropolis. 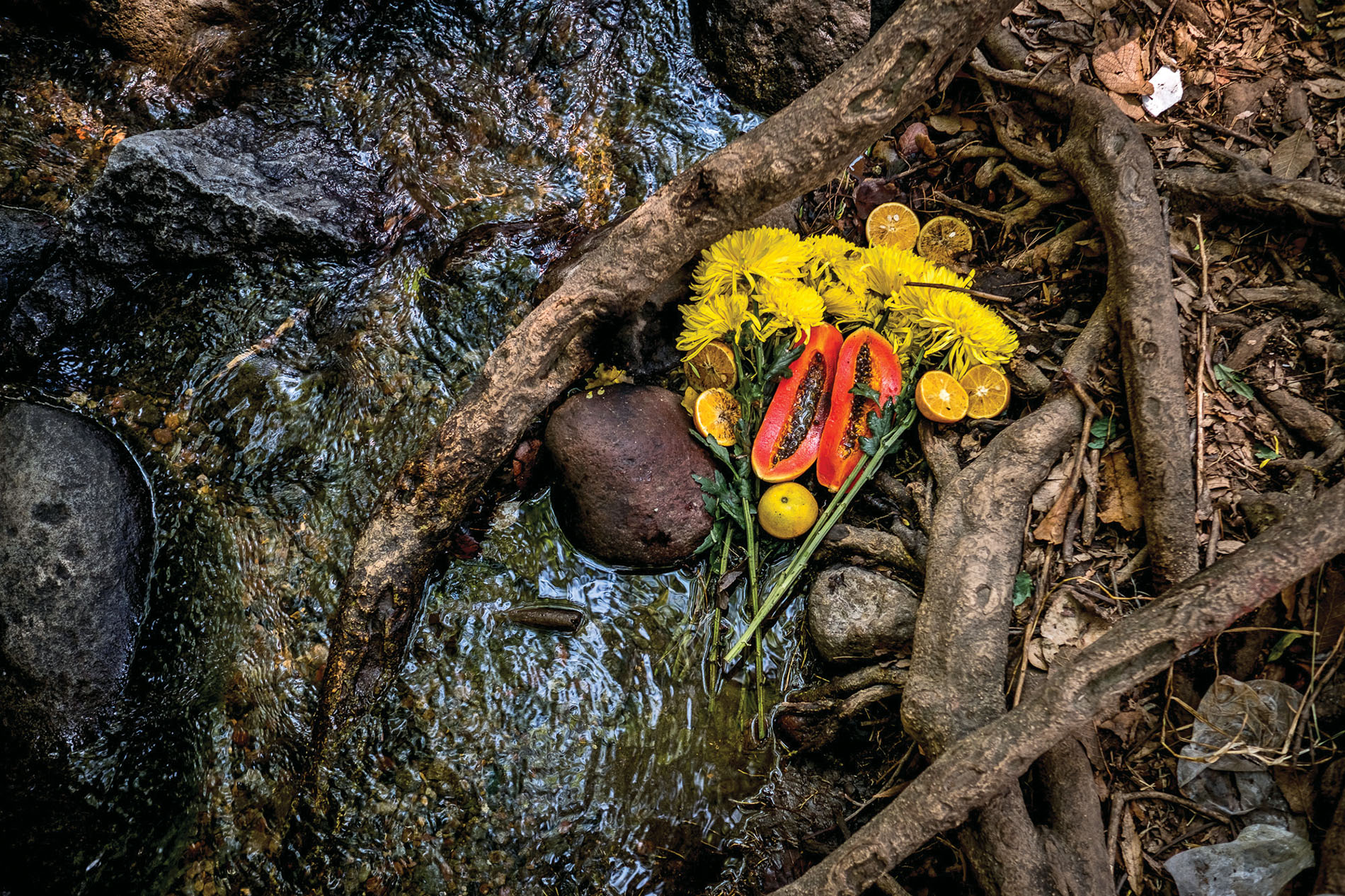 The most populous city in North America has only one living river not confined to underground pipes: the fragile Río Magdalena.

The forest ecosystem that nurtures it is the same one that supports the majority of Mexico City’s water sources, including the vital Cutzamala reservoir system. Though the Magdalena feeds into the water grid, it turns from clear to sludgy shortly after it makes contact with the periphery of the city. The river becomes a “disgusting sewer,” says photographer Luc Forsyth, as soon as it hits the urban sprawl. “I have never seen so dramatic a shift in a river within a few hundred meters.” Urbanites living along its banks could easily go their whole lives unaware that the Magdalena remains pristine just a few miles upstream. Farmers and shepherds whose rural countryside the Magdalena passes through have compelling incentives to protect the river. 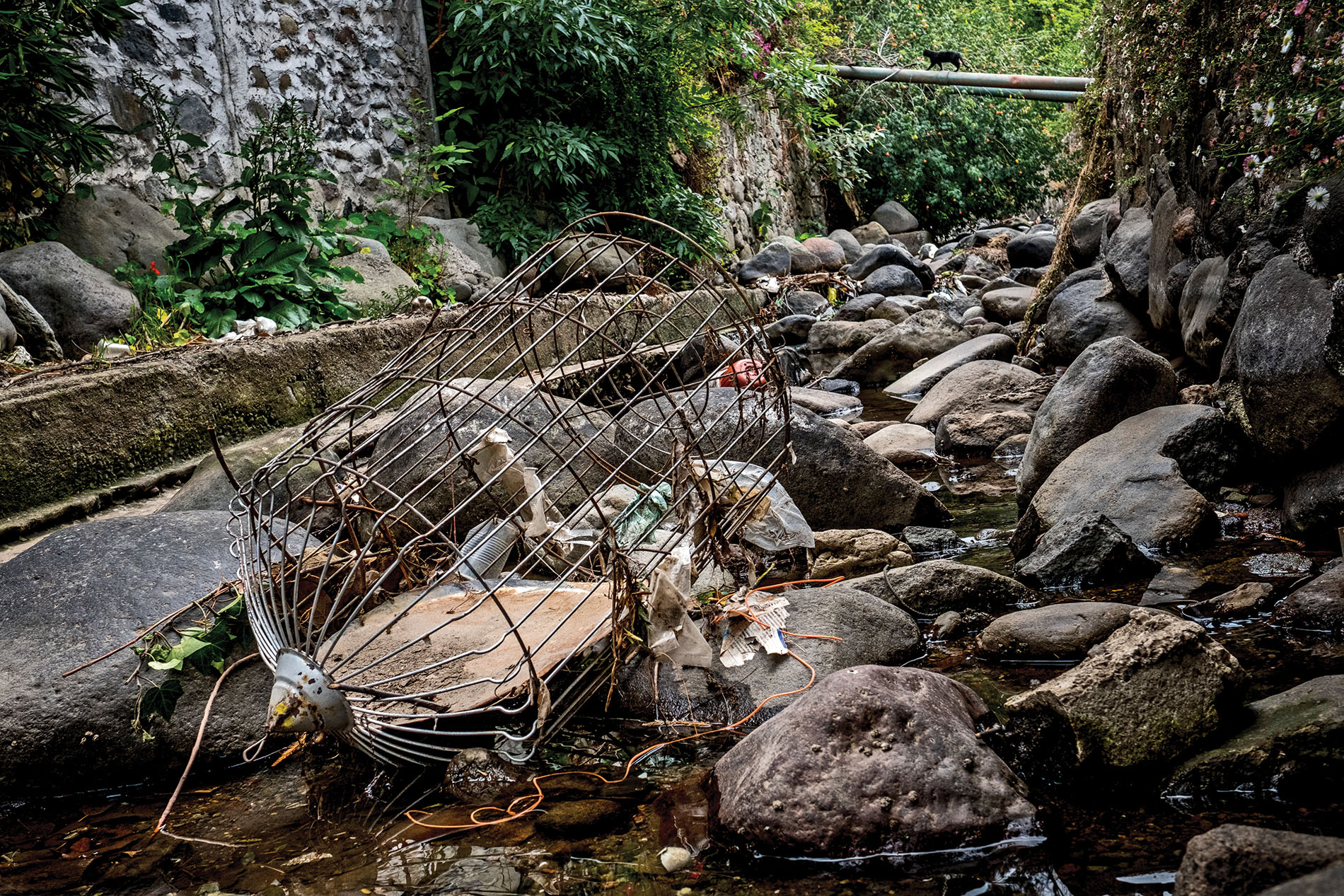 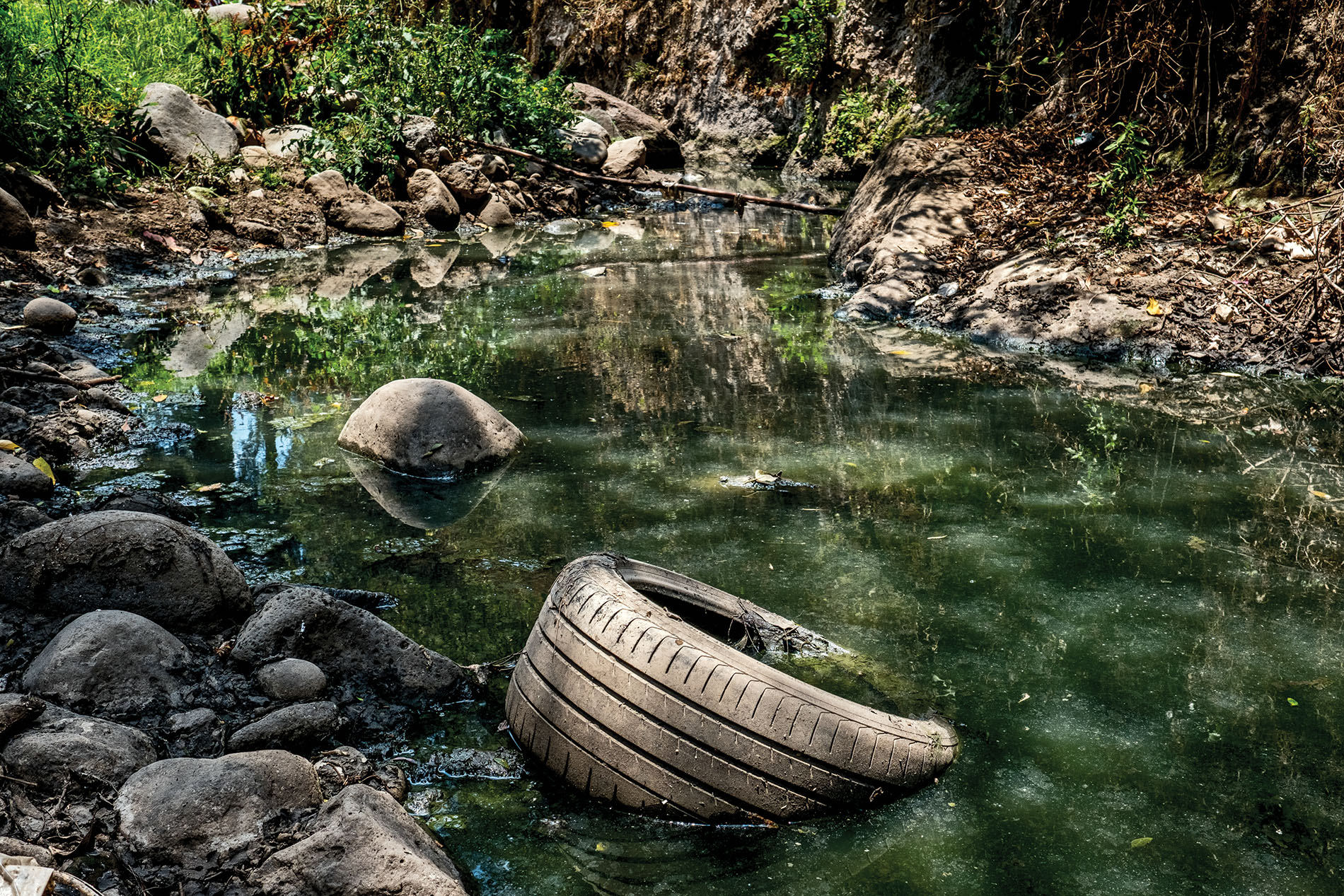 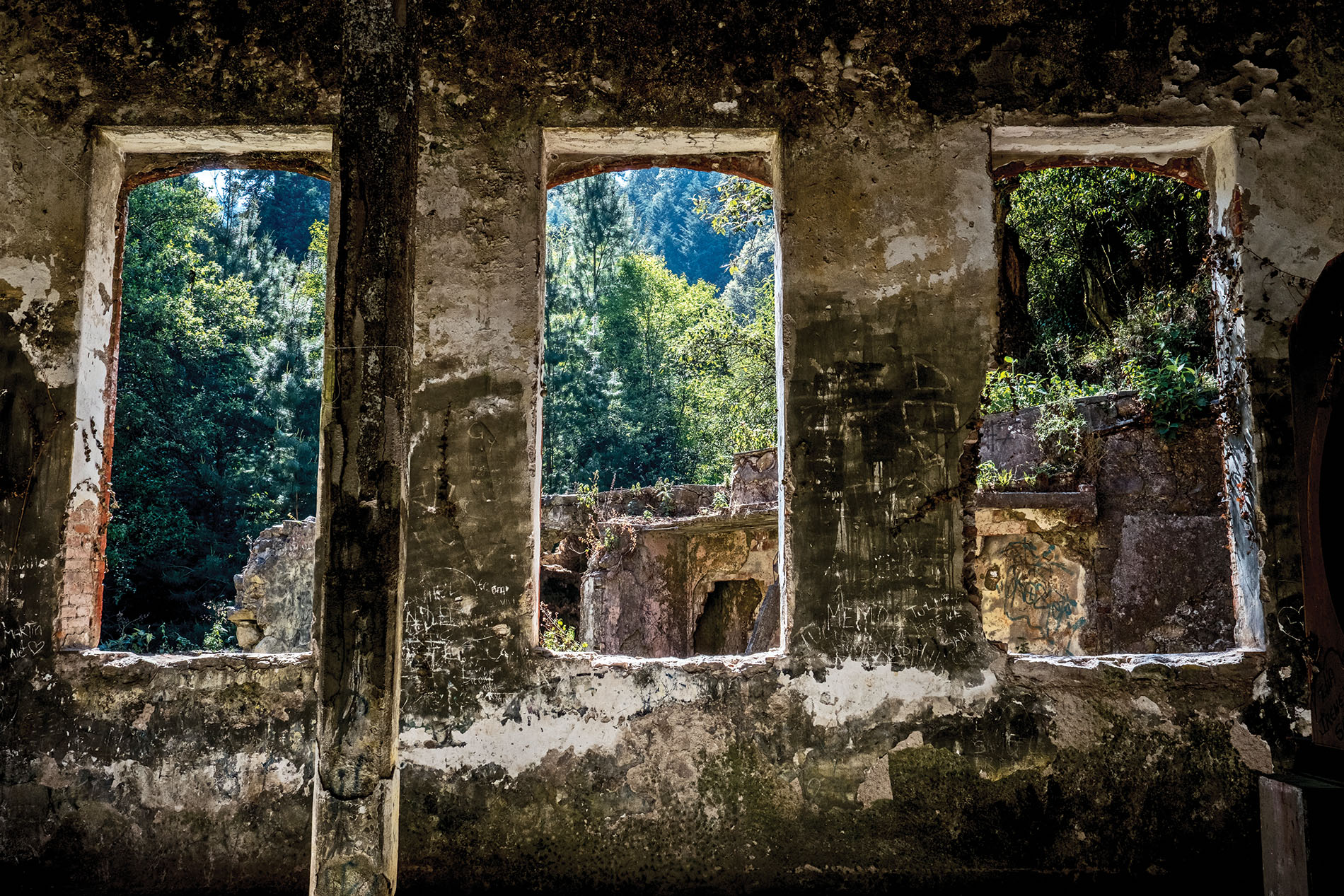 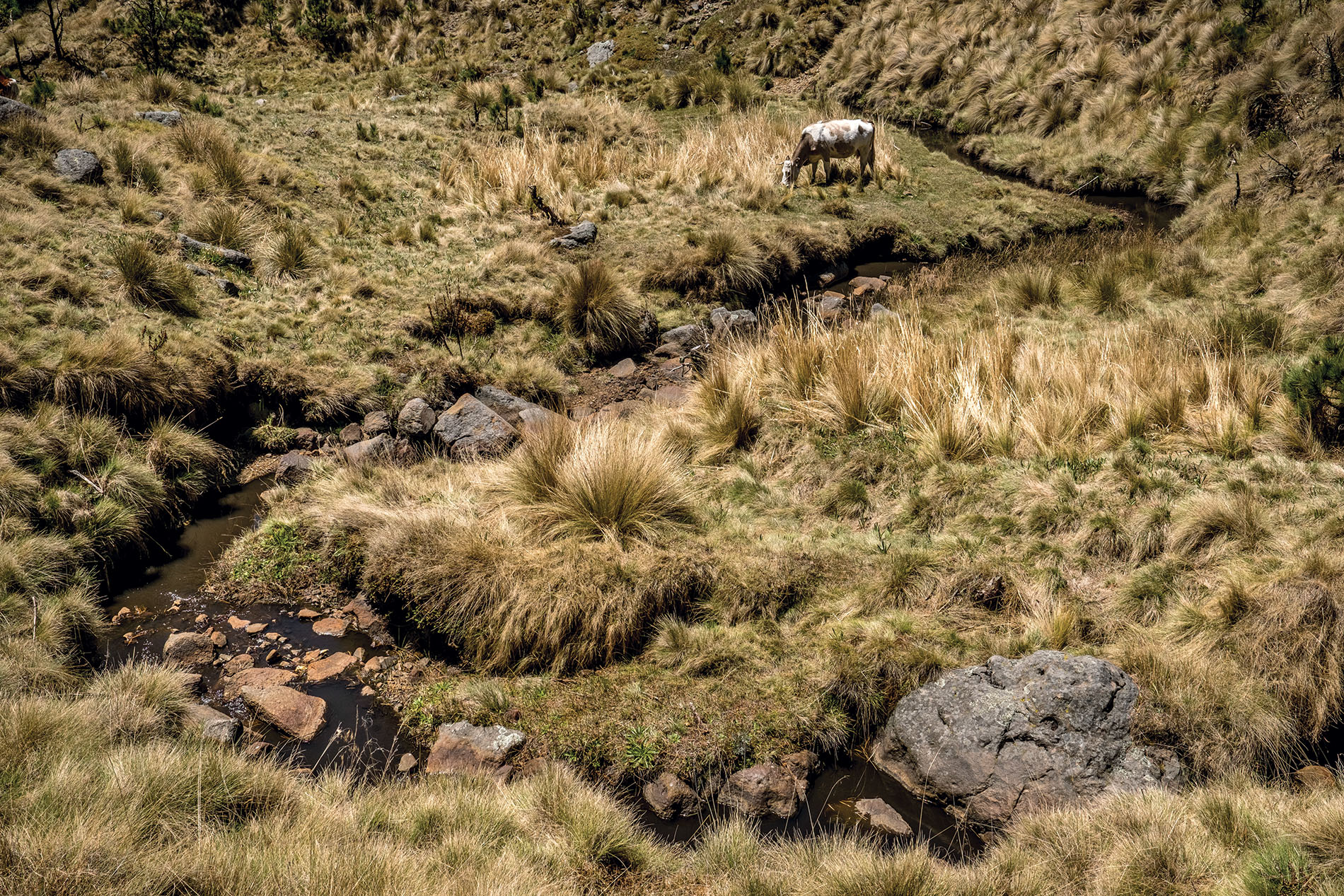 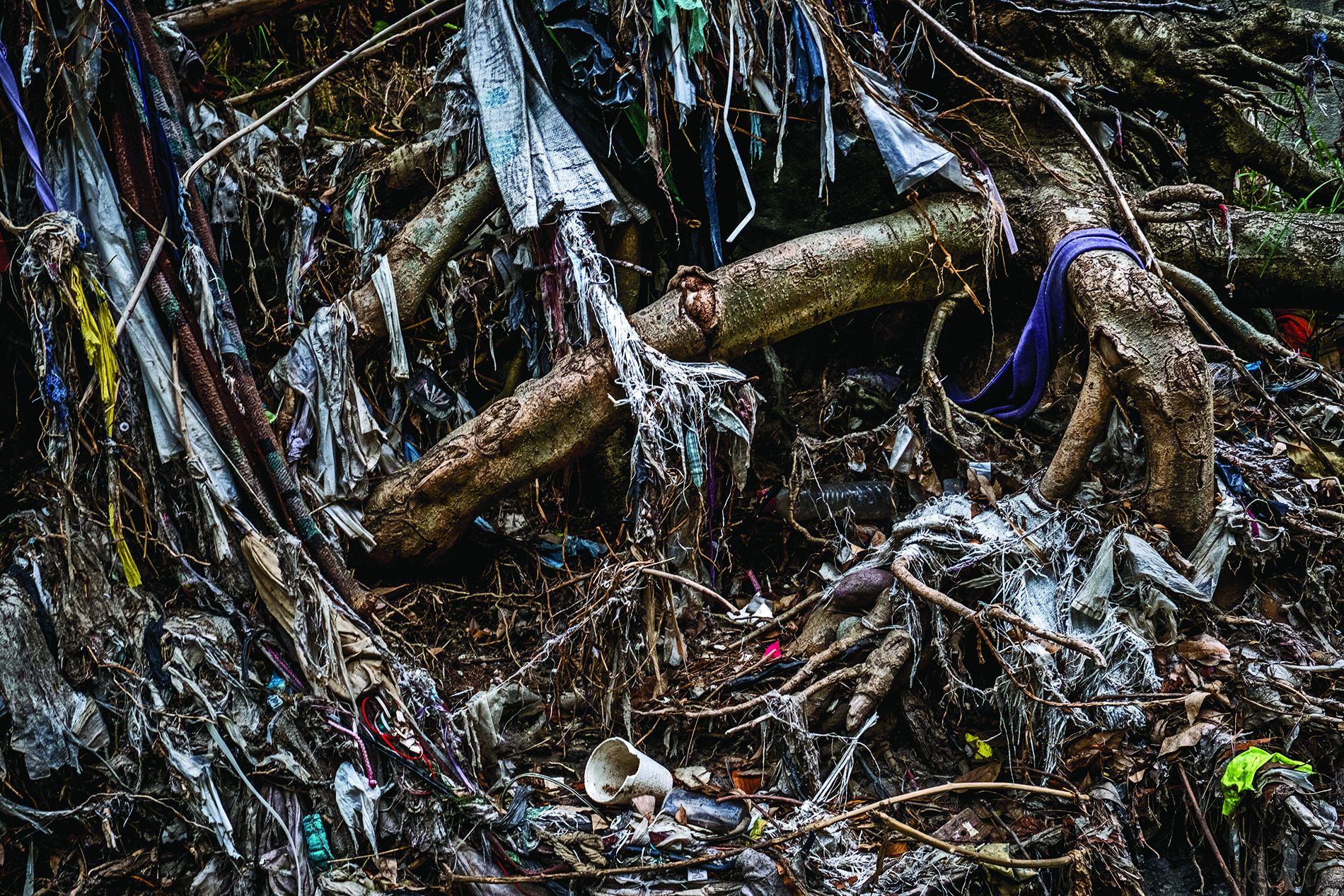 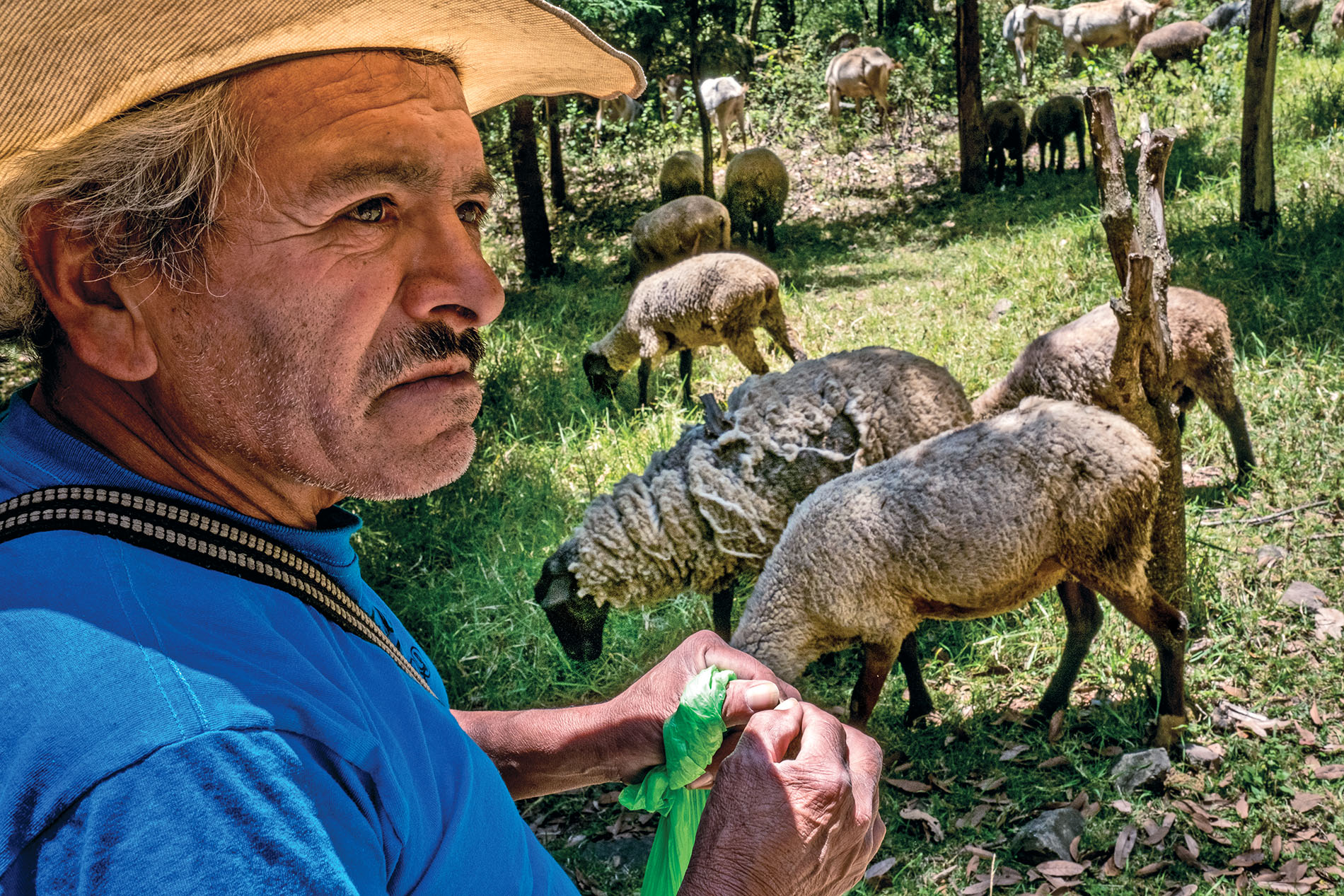 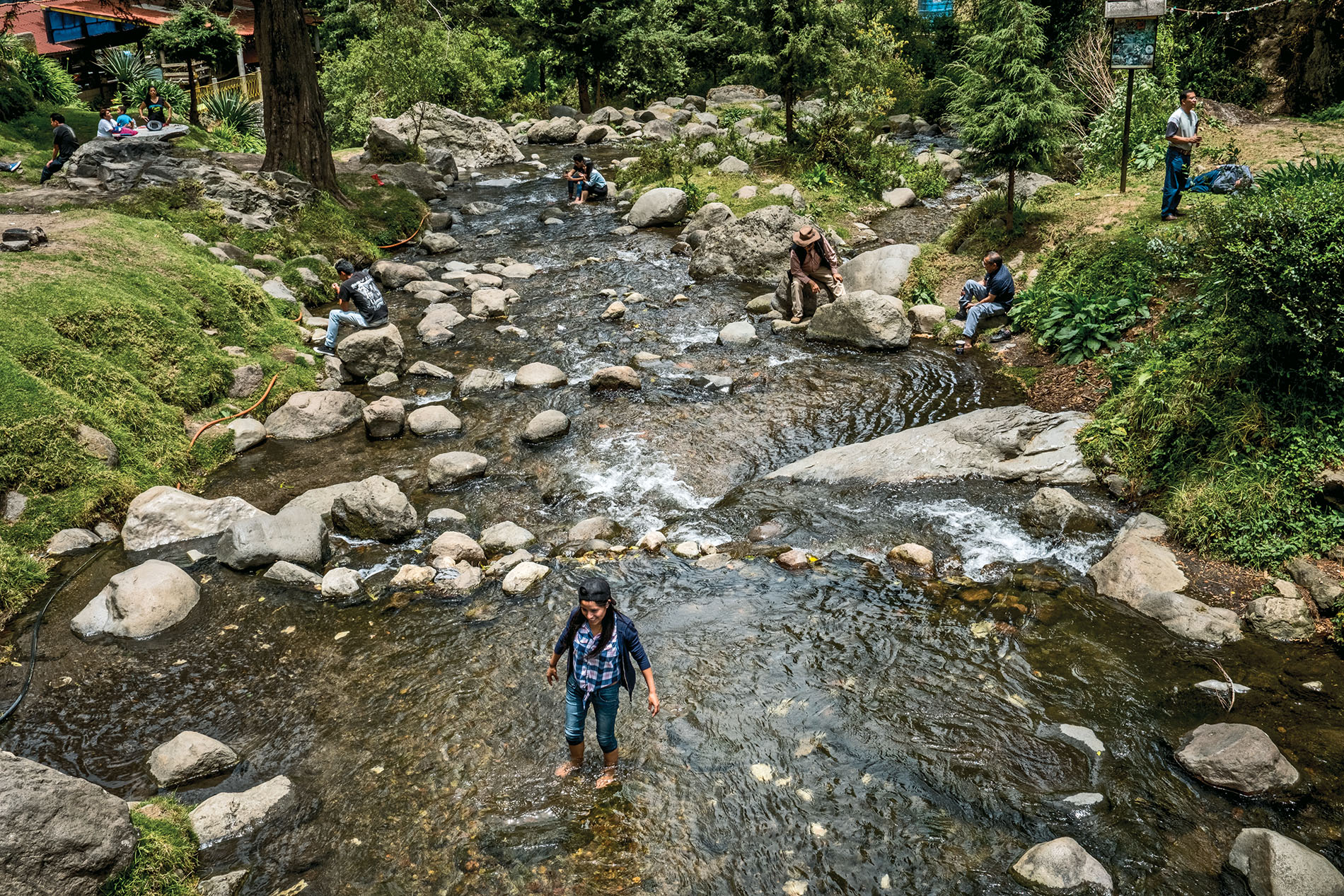 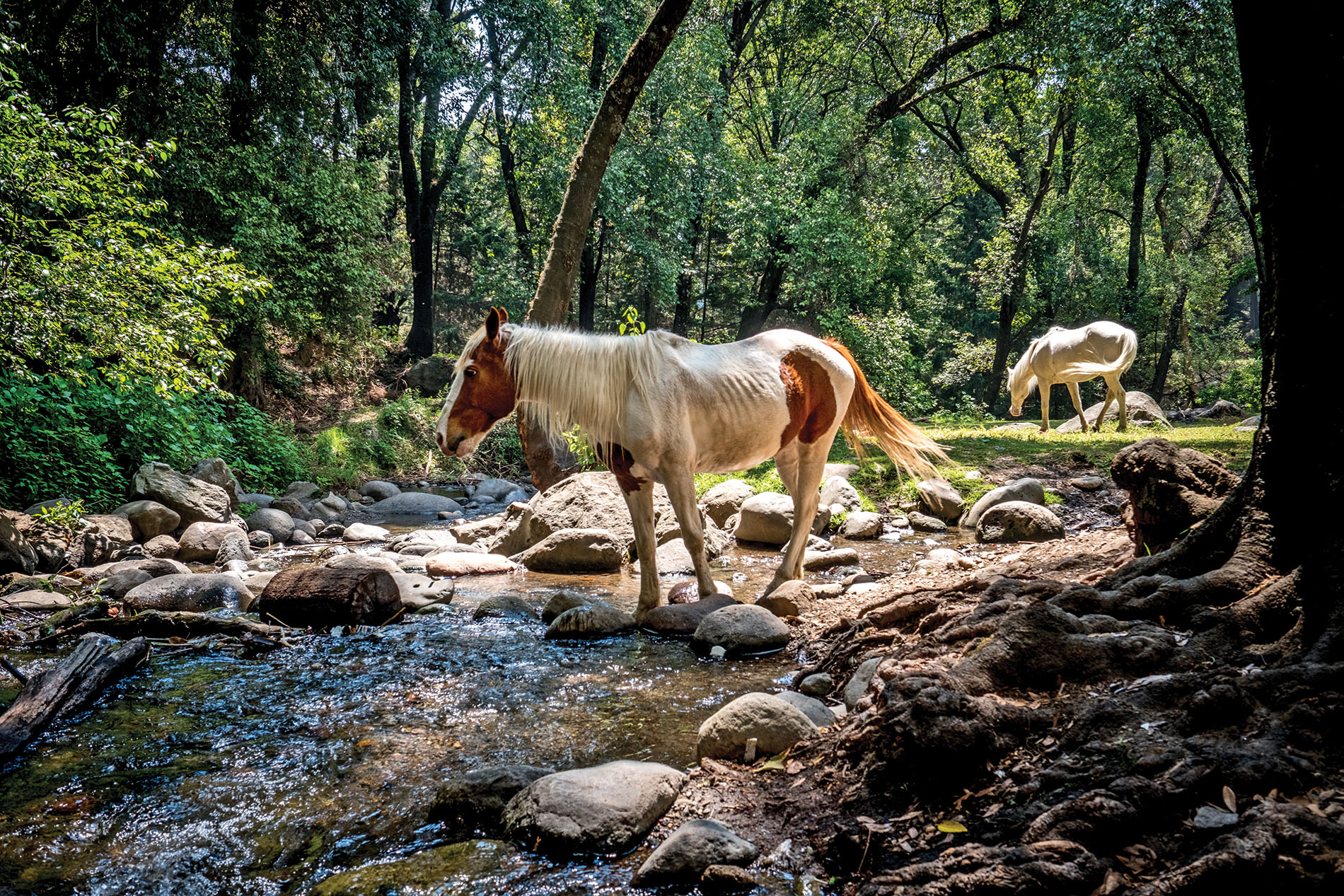 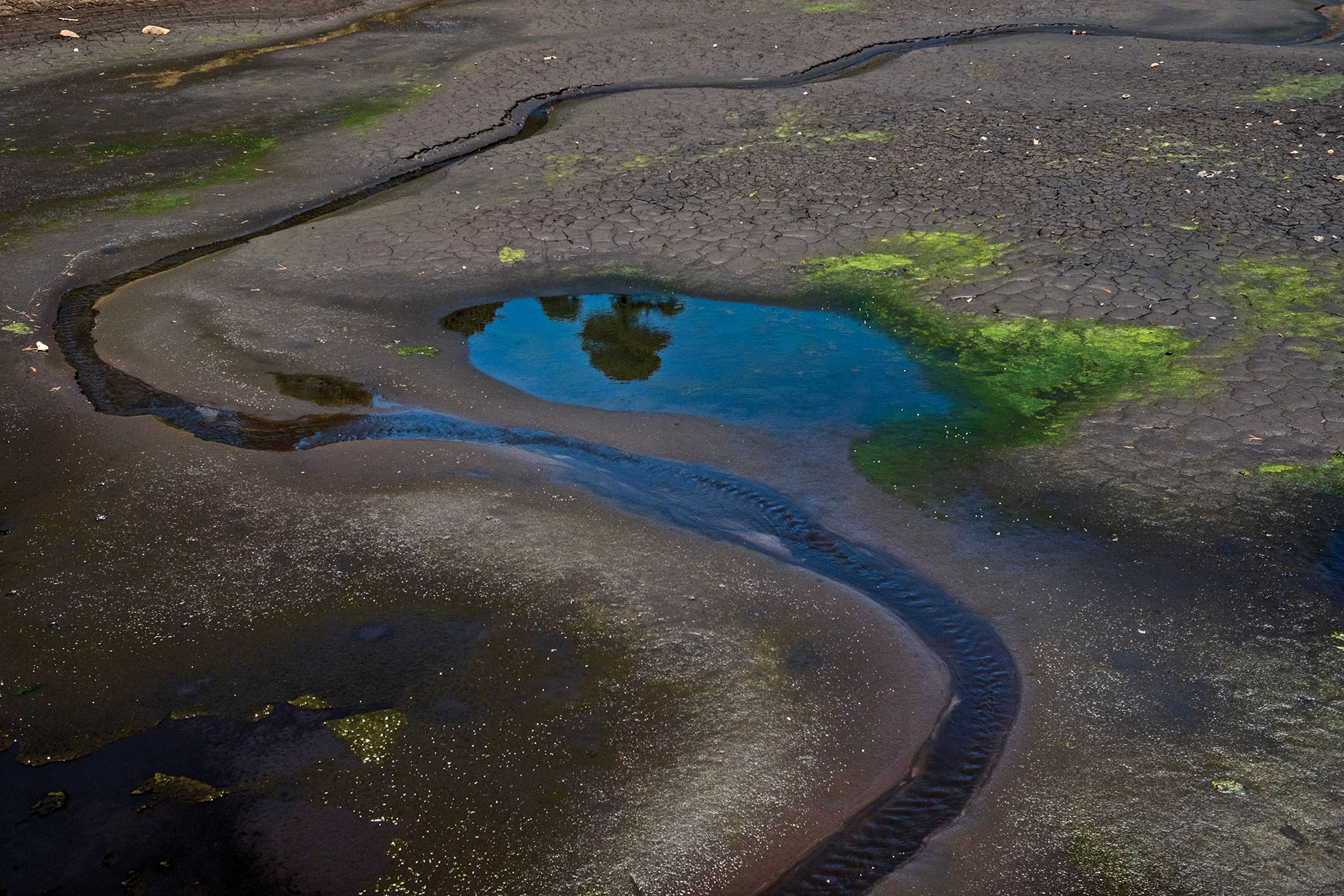 A discarded birdcage is exposed in the summer, when the Río Magdalena is at its lowest level, leaving Mexico City with virtually no fresh flowing river water. The capital was once home to many rivers, but governments unwilling to invest in their maintenance drained and encased them in underground pipes.

A car tire is half-submerged in a pool of raw sewage. Quickly upon entering the city, Río Magdalena becomes too polluted to support much wildlife, and far too repellent to invite recreation.

The crumbling remains of an electricity generating station along the Río Magdalena. At one point, four such facilities existed, supplying power to private factories that have since shut down.

Cows graze in a field around the unsullied stretch of river outside the city center. Even during the dry season, the Río Magdalena supports life in the hills surrounding Mexico City, says Fermín Vazquez, a tourist guide who works in the area. If the river were to dry up completely, very little could survive the hot summers.

A tree’s eroded roots are choked with plastic that has washed along the banks of the Río Magdalena. Mexico’s urban poor buy the vast majority of their drinking water in bottled form, and never drink the river water that flows through the city. Living close to the poverty line, many have urgent concerns other than keeping the river clean.

Jacinto Valenca, 54, is a shepherd who has lived near the Rio Magdalena his entire life. The health of the river is essential to the well being of his flock, but he says heavy urban usage of the river has decreased its flow.

Mexico City residents travel to the outskirts of the metropolis to relax along the banks of the Río Magdalena. The region is one of the few places in Greater Mexico City to enjoy clean river water and an unspoiled landscape.

Horses drink from the Río Magdalena and graze on the grass that grows on its banks. Around its unpolluted segment, the last living river in Mexico City supports micro-climates that are relatively unknown for the metropolis.

A small stream marks the beginning of the Río Magdalena. The fragile waterway is under constant threat from the urban expansion that brings pollution with it. Stricter monitoring of illegal dumping around urban sections of the Río Magdalena could reverse the worst of the spreading damage.

Luc Forsyth is an environmental photojournalist and videographer based in Mexico City. He specializes in the social and humanitarian impacts of environmental issues.

A version of this article originally appeared in the May/June 2017 issue of  FP magazine. Subscribe to FP Premium to receive the print edition.