The Making of a Climate Outlaw

Extreme weather pushed a farmer and a fisherman to take up arms. These are their stories.

GAROWE, Somalia, and DADAAB REFUGEE CAMP, Kenya — One man became a pirate, hijacking cargo ships that passed within striking distance of the Somali coast; the other an insurgent, fighting alongside al-Shabab extremists seeking to topple the Somali government. Neither wanted to take up the gun. Both said they were driven to it by a vicious cycle of conflict and environmental decay.

Abdikadir Hassan once made a good living as a fisherman in Eyl, a coastal town in Somalia’s semi-autonomous Puntland region. He supported his parents, wife, and children, setting off each afternoon in a skiff and returning the next morning with a bounteous catch. “I used to catch fish, lobsters, and sharks, and the fishing industry was strong,” recalled Hassan, who has a slender face and furrowed brow.

Somalia’s fish stocks have been declining since 1991, when rebels toppled dictator Siad Barre and the country spiraled into civil war. As rival warlords wreaked havoc on land, foreign commercial fishing fleets took advantage of the chaos and plundered Somalia’s coastal waters. Unlike small-scale Somali fishermen, the foreign vessels dragged massive mesh nets along the ocean floor, destroying coral reefs and sweeping up all sea life in their paths. Foreign fleets still dredge up roughly three times the amount of seafood that Somali fishermen do, according to conservative estimates.

Hassan watched his livelihood dry up during the war. For years, he scraped by on dwindling catches, but then his skiff was destroyed by the tsunami that rocked the Indian Ocean in 2004. He tried to revive his business with a rented boat, but he was barely getting by while foreign fleets carried off what he viewed as his country’s precious natural resources. So he and other struggling fishermen decided to fight back.

“I was among the first people to step up and defend our waters,” he said. “We don’t know who owns those vessels. There are many nationalities, and we don’t know them. They had no flag or anything. They were just thieves.” 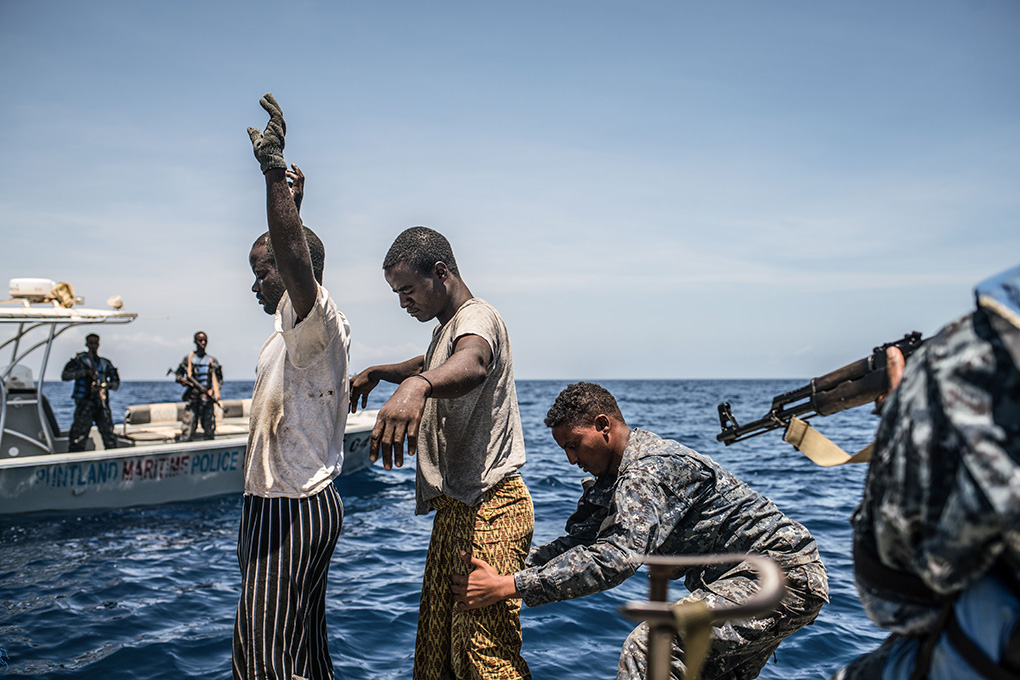 The Puntland Maritime Police Force searches a fishing boat for arms while on patrol off the coast of Bosasso. (Photo credit: Nichole Sobecki)

The Somali “Coast Guard,” as the pirates took to calling themselves, hijacked 163 foreign vessels between 2007 and 2012, according to the U.N. Office on Drugs and Crime. Soon warlords and criminal syndicates were bankrolling their own piracy outfits that pulled in hundreds of millions of dollars in ransom payments before NATO, the European Union, and U.S. naval forces began patrolling Somali waters and all but stamped out the piracy trade.

“Some people saw us as heroes, and some didn’t,” said Hassan, who quit piracy and started driving a taxi in Puntland’s regional capital, Garowe, in 2009, after a hijacking went sideways and two of his friends drowned.

The same could be said of al-Shabab militants who were locked in a bloody conflict with Somalia’s Western-backed government at the same time as piracy was spiraling out of control on the high seas. The group’s inclusive vision of an Islamic state appealed to many who were weary of decades of clan warfare, even as its extreme ideology and brutal tactics alienated others. But as recurrent droughts wracked Somalia in the late 2000s, al-Shabab dug into the country’s few remaining verdant regions, mainly in the south, and began extorting farmers as a way to generate income.

In the fertile lowlands adjacent to the Jubba River, acres of diligently irrigated mango and banana fields had been enough to sustain Ahmed Ibrahim’s family and the families of his farmhands for years. But in 2008, al-Shabab militants arrived and demanded two-thirds of each farmer’s harvest. “They come to the farm and take everything that we have worked so hard to grow,” said Ibrahim, whose name has been changed to protect his identity. “If we kept what [al-Shabab] had taken as tax, it could have been very beneficial for us. But you cannot talk. Sometimes you feel like joining them.”

Eventually, Ibrahim did join them. He won’t talk about what he did in the two years he fought with “the guys,” as he calls al-Shabab, but from 2008 to 2010 the group was responsible for dozens of terrorist attacks and kidnappings, including, most likely, the abduction of the renowned English ecologist Murray Watson. What al-Shabab didn’t do during those years was steal Ibrahim’s harvest — the group targeted neighboring farms instead, sometimes killing or arresting the owners.

“So if I had not joined them, they would have taken mine, too,” said Ibrahim, who has a short-cropped beard and relaxed demeanor.

But membership in al-Shabab was of little use when it mattered most, during the worst drought in 60 years in 2011. Ibrahim couldn’t keep his crops growing then, even with the extremist group’s protection. “So the farm … became dead,” he said.

Ibrahim and his family walked more than 200 miles to Kenya’s Dadaab refugee camp, where close to 300,000 Somalis have settled since 1991. There they waited out the worst of a famine that claimed a quarter-million Somali lives. Today, Ibrahim lives in a flimsy domed hut made from white-and-blue U.N. tarps in a sea of white-and-blue huts occupied by many of the people he once terrorized. Ultimately, he said, it was extreme weather, not extremism, that pushed all of them over the edge.

Read more: The Key to Saving Somalia is Gathering Dust in the British Countryside: What if there were a blueprint for climate adaptation that could end a civil war? Read Laura Heaton’s feature story for FP’s Climate Change issue.