Europe’s highest court has just cleared the way for vaccine-truthers to sue manufacturers, even without any evidence.

By Laurie Garrett, a former senior fellow for global health at the Council on Foreign Relations and columnist for Foreign Policy.
June 26, 2017, 12:56 PM

This week, the highest court of the European Union handed opponents of basic public health their greatest legal victory in recent memory. At a time when a widening measles outbreaks across Europe and a growing pattern of parents refusing to immunize children, the Court of Justice of the European Union — the rough equivalent of the U.S. Supreme Court — decided that courts across the Continent may weigh whether a vaccine caused an illness regardless of whether or not there is any scientific evidence linking the two.

Defining its mission as consumer protection, the CJEU said Europeans ought to be able to sue manufacturers, “excluding any method of proof,” because of the imbalance of power between individual consumers versus large corporations. Europe’s courts, the CJEU ruled, have a duty to “protect consumer health and safety and ensure a fair apportionment between the injured person and the producer of the risks inherent in modern technological production.”

The high court decision comes at a fragile time for the international vaccine regime. Vaccine supplies are dwindling amid epidemics; manufacturers are increasingly skittish of vaccine production due to low profits and high liabilities; parents all over the world are increasingly reluctant to immunize their children; and vigilante violence and assassinations against vaccination campaigns gain religious sanction. There’s also the fact that the president of the United States now openly questions the safety and utility of vaccines. Given the new legal vulnerability of existing vaccine norms, there’s no telling whether they’ll be able to survive, or for how long.

Those norms have been under assault for some time by a growing culture of anti-scientific paranoia.

Immunization rates across much of Europe have plummeted since the turn of this century, falling below half of all children in parts of Italy, Spain, Greece, and Eastern Europe. Outbreaks have predictably ensued, especially of measles. In the past 18 months, Romania has reported 6,743 measles cases, 30 of which were fatal; newborns and small children have been the most susceptible. Ukraine has 735 cases so far in 2017, compared to no measles cases in 2016. Italy has reported 2,988 cases, 237 of them in healthcare workers. Even staid Germany has witnessed almost 700 measles cases this year, fueled by parental refusal of vaccinations. Of the 44 European nations, 24 had completely eliminated measles by early 2016, and the Continent was on a path to eradication of the viral disease. As of June 2017, however, there have been more than 11,000 cases reported in 18 European countries. This year France has recorded six times more measles cases compared to this time last year. Other vaccine-preventable scourges are also surging across Europe, including whooping cough, mumps, rubella and hepatitis B, prompting French Minister of Health Agnès Buzyn to call for nationwide mandatory immunization of all children against 11 diseases.

Since 2007 I have been tracking outbreaks of vaccine-preventable diseases worldwide, available publicly in an that is data-rich and updated weekly. The trends are obvious, as outbreaks of once-vanquished scourges like mumps and whooping cough have increased in frequency and size across Europe and North America. Europe is hardly alone in seeing measles, mumps, whooping cough, and other long-eliminated childhood scourges return, thanks largely to vaccine refusal. Canada eradicated measles in 1998; today, physicians are battling cases in children and young adults from Vancouver to Nova Scotia. The cheek-swelling and potentially deadly mumps has been seen this year from Hawaii to Maine, prompting serious concern about both vaccine efficacy and parental refusals. Upstate New York is fighting both measles and mumps. Los Angeles County is trying to stop an outbreak that has afflicted 42 infants this year, and nationwide there have been 3,176 mumps infections as of May 20, compared to 5,833 in the entire year of 2016 –– the largest number in a decade. Minnesota’s Somali community is struggling with a measles outbreak that exceeds the national total of 2016 cases, spawned by anti-vaccine activists who counseled the immigrants to refuse to immunize their children. Whooping cough (or pertussis) was so effectively controlled in the United States by the late 1960s that few physicians ever saw cases or recognized its symptoms, but since 2012 the numbers of cases have risen steadily, now exceeding the number reported in 1955. By far the majority of whooping cough cases are in counties in the U.S. where parents are allowed to file for vaccination exemptions on philosophical or religious grounds.

The Complaint of Mr. J.W.

But this climate of paranoia around vaccines doesn’t just affect public health. It also threatens the viability of vaccine manufacturers. Just seven companies in wealthy countries still make vaccines, three of them based in the United States. And merely four companies make 80 percent of the world’s vaccine supply. For these companies, demand is down, hostility is up, and profits are poor.

They also face new legal risks. Consider the European court case against Sanofi Pasteur, which is the world’s second-biggest vaccine-maker and the most willing of its competitors to manufacture not only immunizations for rich nations, but also those for diseases like yellow fever and cholera that typically plague only poor nations.

The case against Sanofi was brought by the heirs of a French man, designated “Mr. J.W.” who claimed that a series of hepatitis B vaccine and boosters the man received in 1998 and 1999 caused him to develop multiple sclerosis (MS) in 2000. Mr. J.W. died of MS in 2011, and his family continued pushing the case through French courts and ultimately to the CJEU. The legal claim, which originated in France in 2006, seeks damages of an undisclosed amount from the company. The family claimed, as the CJEU decision put it, “that the short period between the vaccination and the appearance of the first symptoms of multiple sclerosis, in conjunction with the lack of any personal or family history of the disease, are such as to give rise to serious, specific and consistent presumptions as to the existence of a defect in the vaccine and as to there being a causal link between the injection of the vaccine and the occurrence of the multiple sclerosis.”

The local court in Nanterre ruled in Mr. J.W.’s favor in 2009, but the appellate court overturned the case in Versailles in 2011. A higher court of appeal in Paris also ruled against Mr. J.W., noting there was no scientific evidence that MS could be caused by any vaccine; such a side effect had never previously been noted with specifically the hepatitis B vaccine; and the one-year time scale between his immunizations and onset of MS symptoms was far too short, as multiple sclerosis takes years to develop. As for Mr. J.W.’s assertion that the lack of a family history of MS lent greater credence to his claim, the Paris court noted that between 92 percent and 95 percent of multiple sclerosis cases occur without any known genetic link or family history.

By 2015 the legal process hinged on a single issue: the value of scientific evidence. The Paris court opted to toss that question to Brussels and the CJEU, asking the European Union’s high court to answer whether the plaintiff’s case had to rest on evidence that can “constitute serious, specific and consistent presumptions capable of proving the defect in the vaccine and the existence of a causal relationship between it and the disease?”

The EU court this week decided that it was unfair to require a plaintiff to provide “serious, specific and consistent evidence … that there is a causal link between that defect and that disease.” If there was a burden to prove, or disprove, such a link, it would be placed on the defendants.

The Future of Compulsory Immunization

In reaction to outbreaks clearly tied to parental refusal to vaccinate children, governments have instituted a variety of policies aimed at making it illegal, or at least socially expensive, to fail to properly immunize one’s offspring. Among the rich countries the United States led in 1986 with passage of the National Childhood Vaccine Injury Act, allowing states to mandate immunizations and granting manufacturers immunity from tort actions akin to Mr. J.W.’s case in France. The law, and protection for the vaccine industry, was upheld in legal challenges at the U.S. Court of Appeals for the Federal Circuit in 2010 and Supreme Court in 2011.

Two years ago, in response to a widespread measles outbreak that started with unvaccinated children interacting at Disneyland, California passed a state law mandating proof of full immunization for all children entering public schools or state-subsidized private schools. Similar legislation was passed in Mississippi and West Virginia, and across the country courts have upheld liberal local interpretations of the original 1986 federal legislation. Other states have removed or restricted their older laws that allowed parents to demand exemption from immunizations. Last month, the Italian parliament passed a law mandating proof of vaccination against 12 diseases for admission to schools. And this month, the German government responded to the country’s measles epidemic (of almost 700 cases so far in 2017 versus 33 over the entire year of 2016) by mandating vaccination, with two tough penalties for noncompliance: a fine of 2,500 euros and expulsion of the child from school.

These tough laws could all be endangered by the EU high court decision. Across Europe, families can now sue their governments and vaccine manufacturers, arguing — without benefit of scientific evidence — that everything from headaches and diminished academic performance to seizures and cancer in their children were the result of vaccinations. In the United States, attorneys are likely to cite the EU court as grounds for revisiting the National Childhood Vaccine Injury Act and various state-level compulsion laws; other, non-EU countries would likely follow suit. The anti-vaccine movement in the U.S. is relentless and newly emboldened by reports that President Donald Trump plans to create a vaccine reassessment commission headed by Robert F. Kennedy, Jr., a leader in the anti-immunization movement. 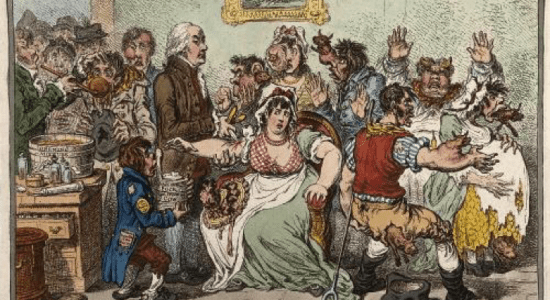 On my office wall hangs a reproduction of James Gillray’s 1802 cartoon, “The cow-pock — or — the wonderful effects of the new inoculation!” Published when Britain’s Edward Jenner showed that the cowpox vaccine safely protected people from deadly smallpox infection, the cartoon mocks public fears that the product would turn them into bovines. Cows ludicrously sprout from people’s noses, mouths, heads, and butts; false fear of the vaccine supplanted the very genuine causes for dreading the extremely deadly smallpox.

Today, in the absence of proof or rational evidence, well-educated people living in the richest countries of the world believe that hepatitis vaccines cause demyelination of their musculature, leading to MS; that measles/mumps/rubella combination vaccines reshape babies’ brains, rendering them autistic; that human papillomavirus vaccines cause mental retardation rather than protecting girls from death by cervical cancer; that “too many” vaccines are given to babies, making them weak or stunted.

And now, thanks to the Court of Justice of the European Union, every one of those crackpot theories can be presented in a European court of law, absent the merest modicum of evidence.

Laurie Garrett is a former senior fellow for global health at the Council on Foreign Relations, a Pulitzer Prize winning science writer, and columnist for Foreign Policy. Twitter: @Laurie_Garrett