A 2015 disaster devastated the country — and paved the way for this year's breakthrough elections.

KATHMANDU — Police guarded a voter registration center in Patan Durbar Square, dozing or fiddling with smartphones amid scaffolding and the ruins of centuries-old pagodas and their cracked stone guardians. Voters cast ballots here on May 14 in the first local elections in Nepal in decades, surrounded by piles of bricks, half-rebuilt temples, and the tarps of NGOs.

Nepal’s elections have undeniably been messy, chaotic, and confusing, the unfinished product of decades of political transition. In an impoverished country still recovering from the impact of the deadly quake of 2015, that’s hardly surprising. But the elections have also been unexpectedly peaceful — and hopeful. As citizens queued to slowly work their way through 3-feet-long ballots, they were ebullient about the possibility of change, the chance to carve out something new on the ruins of the old.

Amina Silakar, 34, a social worker and candidate with the royalist Rastriya Prajatantra Party, was mixing in Kathmandu’s Durbar Square in May on the first day of elections for local posts, including mayors, deputy mayors, ward chairs and ward members. She blamed the rubble around her on then-Prime Minister Pushpa Kamal Dahal, a former Maoist rebel, and the Nepali Congress, his coalition partner and the largest political party.

“All countries are giving, but the government isn’t giving anything,” Silakar said. “It’s very hard, they take lots of money. It is the truth, everyone knows that. That’s why we need elections.”

Rebecca Solnit argues in her book A Paradise Built in Hell that disaster — and its aftermath — can empower societies with the chance of change. “Disasters provide an extraordinary window into social desire and possibility, and what is seen there matters elsewhere,” Solnit writes. Nepal is serving as a test case of that thesis.

It’s been more than two years since a devastating 7.8 magnitude earthquake struck northwest of Kathmandu, Nepal’s capital, killing nearly 9,000 people. Despite international donors pledging some $4.4 billion in relief, reconstruction has been hampered by corruption and political incompetence. The National Reconstruction Authority, Nepal’s central office for earthquake response, initially estimated that the reconstruction effort would take 5 years and cost $9 billion. Though the government has spent only $380,000 to date, according to the finance ministry, the head of the National Reconstruction Authority says it’s only a year behind schedule. Approaching the elections — mandated by a constitution passed in September 2015, just months after the earthquake, and met with deadly protests — many feared continued public discontent with the central government, stirred up by its inept earthquake response, would produce violence.

Citing potential clashes at the polls, Kathmandu split the elections into two, and then three, parts, with Province 2 — the area of the country most loudly challenging Nepal’s heavily centralized politics — now due to vote in September. The government also grounded flights, closed roads save for emergency vehicles, and shut the border with India. It mobilized some 225,000 troops and police to guard voting sites for the first round of elections in the central hill region surrounding Kathmandu, and another 162,000 for the second round of elections on June 28, primarily in the restive southern region on the border with India. But the second voting phase in June — which was supposedly more worrisome for law enforcement than the initial voting day in May — saw only minimal disturbances and no fatalities, according to government authorities.

Nepalis complained about the massively long ballots — in the capital, Kathmandu, it was 3 feet long and had 68 columns — the confusing sweep of more than 100,000 candidates for a third as many positions, and, in the latest vote, the tedious queues in monsoon rains. Yet they were happy to puzzle their way through each party’s symbols, supposedly intended to simplify voting in a country where more than a third of adults can’t read. Beyond the well-known emblems of Nepal’s three main parties — the tree for Nepali Congress, the largest; the sun for Unified Marxist-Leninist, the primary Communist party; or the hammer and sickle for the once-insurgent Maoists — the others were left to haggle over sometimes indistinguishable, prosaic symbols such as a camera, pastry, pushpin, bio-hazard sign, snowflake or even the Twitter bird. 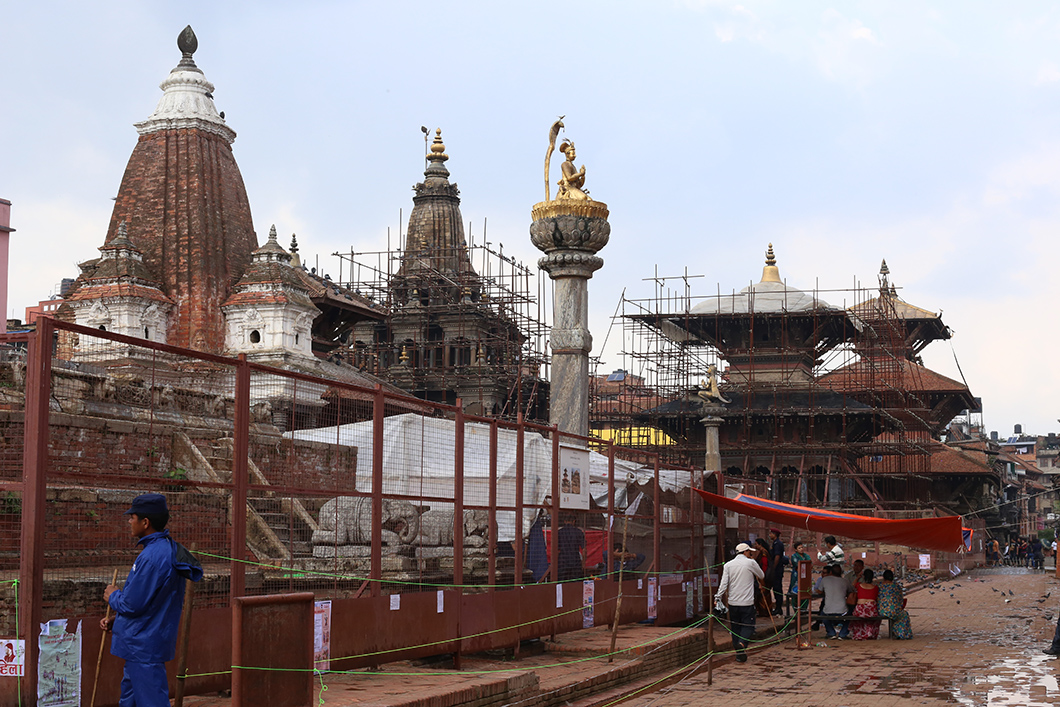 A polling center in Patan Durbar Square, a UNESCO world heritage site still under reconstruction after the 2015 earthquake, on  May 14, 2017. (Photo Credit: TIM BOWDEN)

Some 14 million Nepalis will have had the chance to vote for their direct representatives after the final round of local elections concludes in September. Set to be followed by national elections in January 2018, these mark the last steps in a drawn-out peace process that began in 2006, when Maoist rebels leading a decade-long insurgency laid down their arms and joined the parliament. This year’s elections are historic because an entire generation of Nepalis have the opportunity to vote for direct representatives for the first time ever, and many others for the first time since the end of the war, which killed some 18,000 people. In a sign of social progress, the rules also require that party machinery field female candidates and contenders from Nepal’s lowest caste.

The demand for a voice crossed generations and castes. On June 28 in southeastern Biratnagar, Nepal’s second-largest city, an older Dalit woman in a bright pink sari who gave her name as Laxmi B.K. displayed the purple line on her thumb with solemn pride. For the first time, she’d voted — and ran as a candidate, with the Maoist Center Party. She couldn’t read her own laminated candidate card, strung around her neck, nor raise the money required to be competitive. But she ran anyway, she told me, “for the upliftment of the underprivileged” most impacted by haphazard development.

“Women and Dalit and other backward groups are on the frontline now, coming together with the majority to fight for equal opportunity,” she said.

Nepal’s Election Commission estimated more than 70 percent participation in both rounds of voting so far, despite the latter falling at the height of rice-paddy planting season and threats of boycott and general strike from the powerful Rastriya Janata Party Nepal, which represents the Madhesi, the Southern region’s largest minority group.

Nepal has cycled through 25 governments in the last 27 years, with 10 in the last decade alone, with the Nepali Congress, Maoists, and Communists rotating positions of power among themselves and the average citizen enjoying little say. The latest transition in government was the result of a “gentlemen’s agreement”: Not long after the earthquake, Nepali Congress’s Sher Bahadur Deuba and Maoist Pushpa Kamal Dahal — a rebel-turned-bureaucrat better known by his nom de guerre “Prachanda,” meaning fierce — agreed that Dahal would serve as prime minister for the second time, for 9 months, before handing over the post to Deuba, for the fourth time. It’s an unlikely partnership; during the war, Deuba had placed a $50,000 price on Dahal’s head.

On May 24, Dahal stepped down on national television, publicly patting himself on the back for achieving a key democratic benchmark with the relatively peaceful first phase of elections.

But Nepal is a young country – about 70 percent of the population is under 35 – and this was the first time many had the chance to vote. Young Nepalis are less likely to stay loyal to the three major parties, which may prove key to ultimately breaking their grip on power. Rather than primarily going abroad for work, more of them are now staying home, and more inclined to agitate for better opportunities than acquiesce to the corruption of existing political elites. They’ve also helped spread the technology that has blown open public access to information.

Kripa Rajopadhyay, a young Nepali woman, held a box of popcorn under one arm and swept her other over a polling site in Patan Durbar Square on election day on May 14. Two years on from the earthquake that hit central Nepal just northwest of Kathmandu, more than 70 percent of the earthquake’s’ victims are still living in temporary shelters, and the UNESCO-listed heritage site is still strewn with rubble.

“There are many countries helping us — it’s not at all as if they are bad neighbors — but the government takes the money and there are no results,” Rajopadhyay told me. The purple line on her thumbnail indicated she’d voted, for the first time in her 22 years. “That’s why it’s important younger people should be so interested in politics, so they can help develop our country.”

But the possibility of public rage is still there. Weeks after the earthquake, Nepali political scientist Seira Tamang praised the “overwhelming determination to survive and rebuild” that Solnit also describes. But Tamang argued it would be foolishly optimistic to assume the state would “magically transform its feudal culture of functioning overnight.” Still, she wrote, “Nepalis have a duty to hold the government accountable, and the right to be heard.”

Today, Tamang says the “rhetoric of resilience” has given way to widespread criticism of the government. “What you hear is anger and frustration, sharpened by the earthquake,” she told me.  The elections could act as a “catalyst” to restructure the relationship between citizens’ and the government.

Govind Raj Pokharel, the National Reconstruction Authority CEO, gave his own frank assessment: “Bureaucrats lie and cheat, but now, once they do, the people say, ‘What is that?’” he said. “The earthquake systematically helped empower people. Given knowledge, they will apply it.”