MOSCOW — Since the waning days of Bill Clinton’s presidency, Svetlana has walked the dogs of American diplomats in Moscow.

The 52-year-old Russian is not a U.S. Embassy employee but has come to this work through recommendations by American pet devotees, lovingly passed down by word of mouth through the years. Svetlana, who gave only her first name, doesn’t remember how many dogs she’s looked after. “It’s definitely under 100,” she says, pushing her oval glasses up the bridge of her nose. “But more than 60.”

Soft-spoken and extremely affable, with her charcoal-colored hair pulled back into a loose ponytail, Svetlana never set out to work for foreign diplomats. But what started out as a side job to earn a bit of cash while raising her children has become her life. She doesn’t speak any English, only Russian, but “language doesn’t matter,” she tells me. “Dogs are like babies. They automatically know when someone is a good person.”

Just after lunch on a clear June afternoon, Svetlana readies the dogs before their walk through a leafy area of central Moscow, where many U.S. diplomats are housed. She has five pooches currently in her charge; four belong to Americans, and the fifth, a Jack Russell terrier called Gary, comes from an Italian diplomat who is her first non-American client. She usually makes two trips, taking out the small dogs first, followed by the larger ones. But today, her older sister Lyuba has joined her, and the two women divide the dogs between them, stroking their snouts and doling out dulcet-toned compliments.

Svetlana makes these walks, usually hours long, each weekday, finding patches of green grass among the shiny new high-rises. Her wards bask in her company, wagging their tails and nuzzling her sport jacket’s pockets, which they know harbor bone-shaped treats.

She has given all the dogs Russian nicknames because “those suit them better.” As she reels off their Russian monikers, the hounds stop in their tracks and turn their heads in recognition. Some have been given Russian diminutives of their original names; others have received entirely new identities. Alexandra, a large mixed-breed with a lustrous ginger coat, is now Sasha; two Cavalier King Charles spaniels — Max, a female, and Riley, a male — are now Masyanya and Lialik; a mixed-breed female found as a stray in India from a previous posting is called Bindu, but renamed Bonia; Gary has become Garik.

Bonia has a lame back leg but manages to merrily hop to the front of the pack; Garik is independent, uninterested in the others. The dogs act like their owners, Svetlana says, without giving too much away. “Sasha hardly ever barks; she’s so gentle. Little Garik is quick on his feet.”

Despite her proximity to the American diplomatic corps, she tries to stay out of politics and away from the heightening tensions between her native Russia and the country of her beloved wards. Relations between Moscow and Washington are at their worst in decades, as the two continue to clash over Syria, Ukraine, and reports of Russian meddling in the U.S. presidential election. The Kremlin’s professed hopes of a rapprochement under President Donald Trump have all but been dashed as Russia-connected scandals and intrigue engulf the White House. 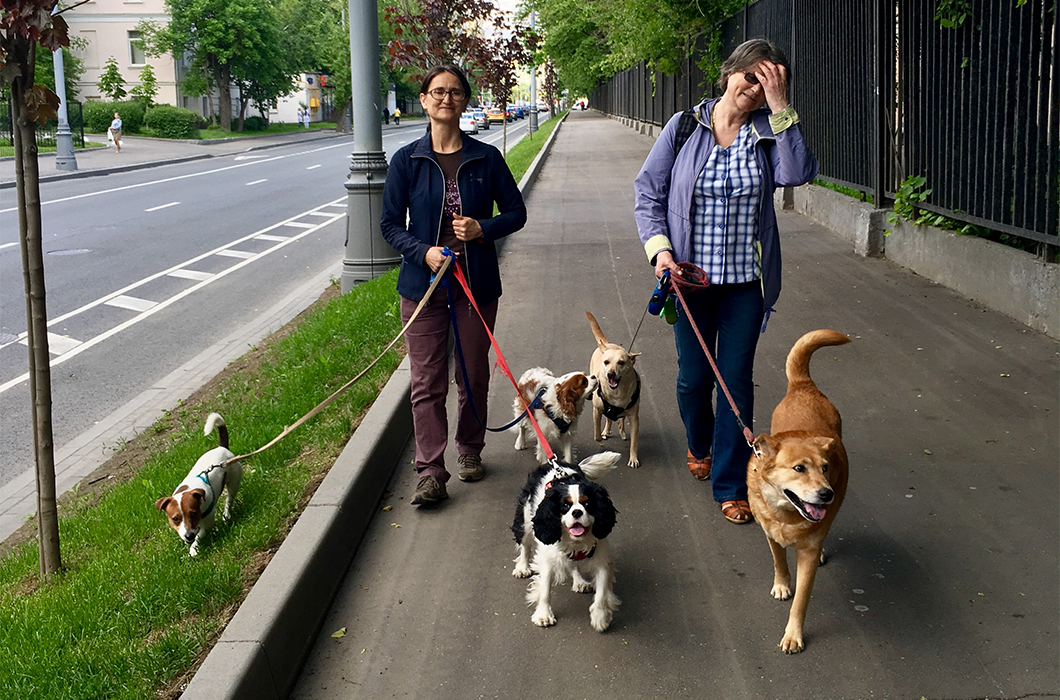 Since the start of Barack Obama’s presidency almost a decade ago, U.S. diplomats posted in Moscow have complained that Russian intelligence services have waged a harassment campaign, including following their children and breaking into their homes and rearranging the furniture. According to memos described in the Washington Post, one diplomat’s carpet was defecated on. During Obama’s first term, a dog belonging to a U.S. defense attaché was reportedly killed by Russian agents who sneaked into his house.

When I ask about who could have killed the dog, the most Svetlana will concede is that sometimes “animals are better than humans.” When it comes to the pets in her care, Svetlana never lets her guard down. “I scour the ground as we walk, making sure there is nothing that could harm them.”

She believes that her American charges, at least, enjoy their time in Russia. “Some have never seen winters like ours. The Cavaliers love to jump about in the snow,” she recalls fondly. When the notoriously fierce Moscow winter, during which temperatures can regularly drop below 10 degrees Fahrenheit, finally draws to a close, Svetlana takes pride in introducing the dogs to the perfumed flowerbeds that appear across the center of the city.

The hardest part of her job is saying goodbye. Postings for U.S. diplomats last between two and four years. “The dogs are this big part of my life, and then suddenly they’re not,” she says wistfully. She is often tasked with seeing the pets off. “When I take them to the airport, they sit in their cages and give me this look, and my eyes fill with tears.”

She tries to stay in touch and sends emails to the owners of the many dogs and few cats she has looked after over the years, especially on the Fourth of July. “It’s their holiday, you know, so I make sure they receive my congratulations.” More often than not, the owners reply, giving her updates on the pets.

By the end of the summer, all five of these dogs will be leaving Russia. “I’ll miss them so much, but they’ll also miss each other. They’ve become friends.” She watches as Sasha sniffs the edge of the sidewalk, preparing to leave what Svetlana calls her “signature.”

“I hope the new diplomats bring dogs,” she says.

This article originally appeared in the July/August 2017 issue of FP magazine.

Fiona Hill will be replaced by the arms control expert Tim Morrison, signaling a possible shift toward nuclear talks.

The Long Rise and Sudden Fall of American Diplomacy

One of Washington's most accomplished diplomats has traced how U.S. foreign policy went astray over decades—and how it can get back on track.

The Evolution of a Russian Troll

Alexander Malkevich, whose employees were detained in Libya, is part of Moscow’s efforts to create a “concert of chaos” around the globe.