The Shaman Masters of Hohhot Have Returned

The confrontation of spirituality and industrial cityscape bridges Inner Mongolia’s past and present. 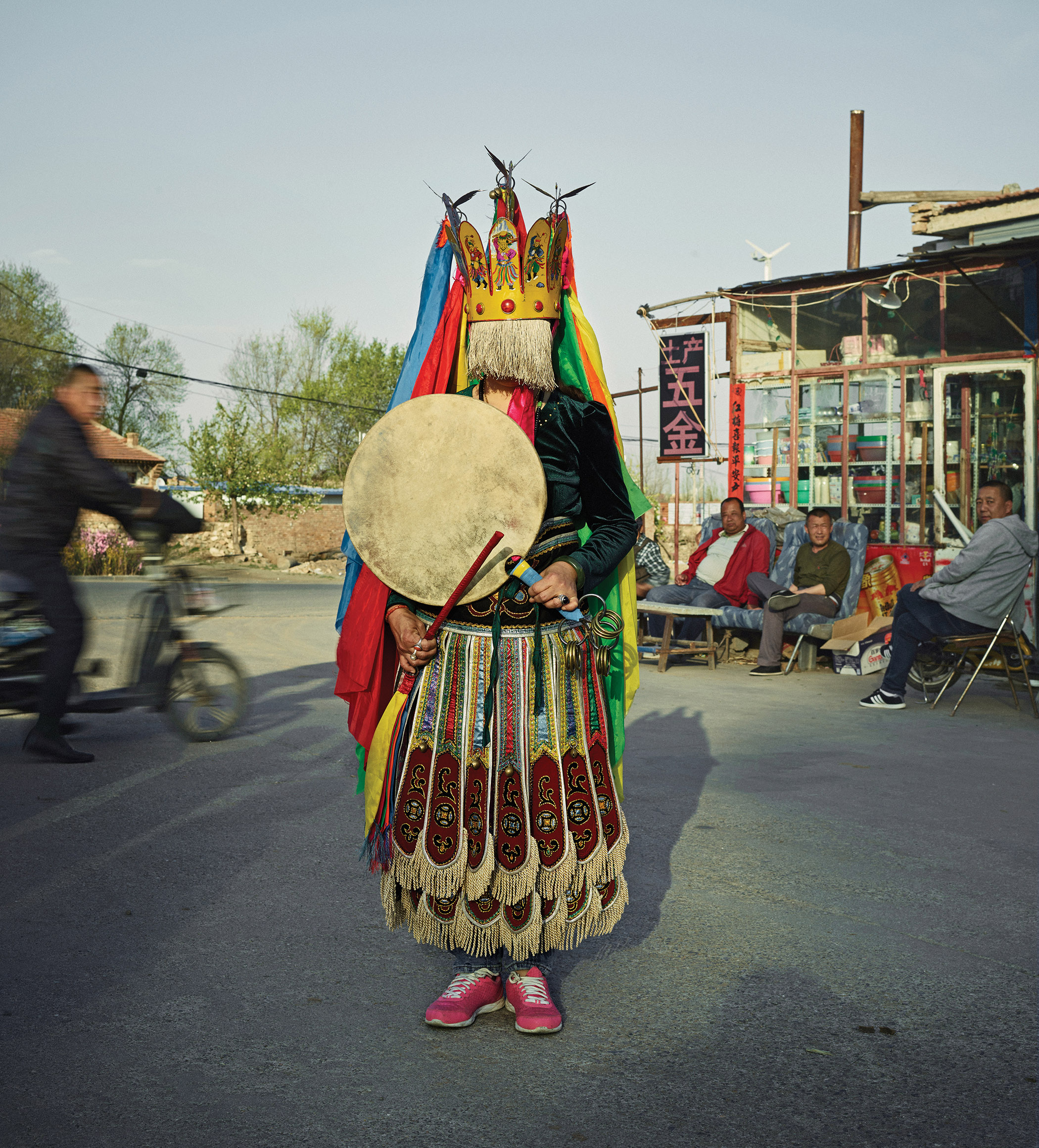 There is a special basement room at a clinic in Hohhot, Inner Mongolia, where shaman master Bai Aolao goes to contact the spirit world. Enclosed spaces are preferable to the outdoors because in rooms like this one, he can more easily contain the spirits he summons to heal the patients.

Bai Aolao is one of the many shaman healers still practicing in northeastern China. Patients seek out care to help ease their physical ailments or mental demons. This ritual healing involves dancing, chanting, and spitting rice wine. For centuries, Mongols hailed shamans as sages and sorcerers of medicine, nature, and religion — some even claim they can speak to the dead. In Mongolian culture they always have played a unique leadership role. In fact, many Mongolians believe Genghis Khan possessed shamanic capabilities.

Shamans were persecuted in Mongolia after the rise of communism there in the 1920s and in Inner Mongolia by the Chinese government under Chairman Mao Zedong; shaman culture dwindled for close to a century. In the 1990s, after the Democratic Union ousted the communist regime in Mongolia and China’s Communist Party adopted less stringent oversight of shamanic practices, they began to resurge. 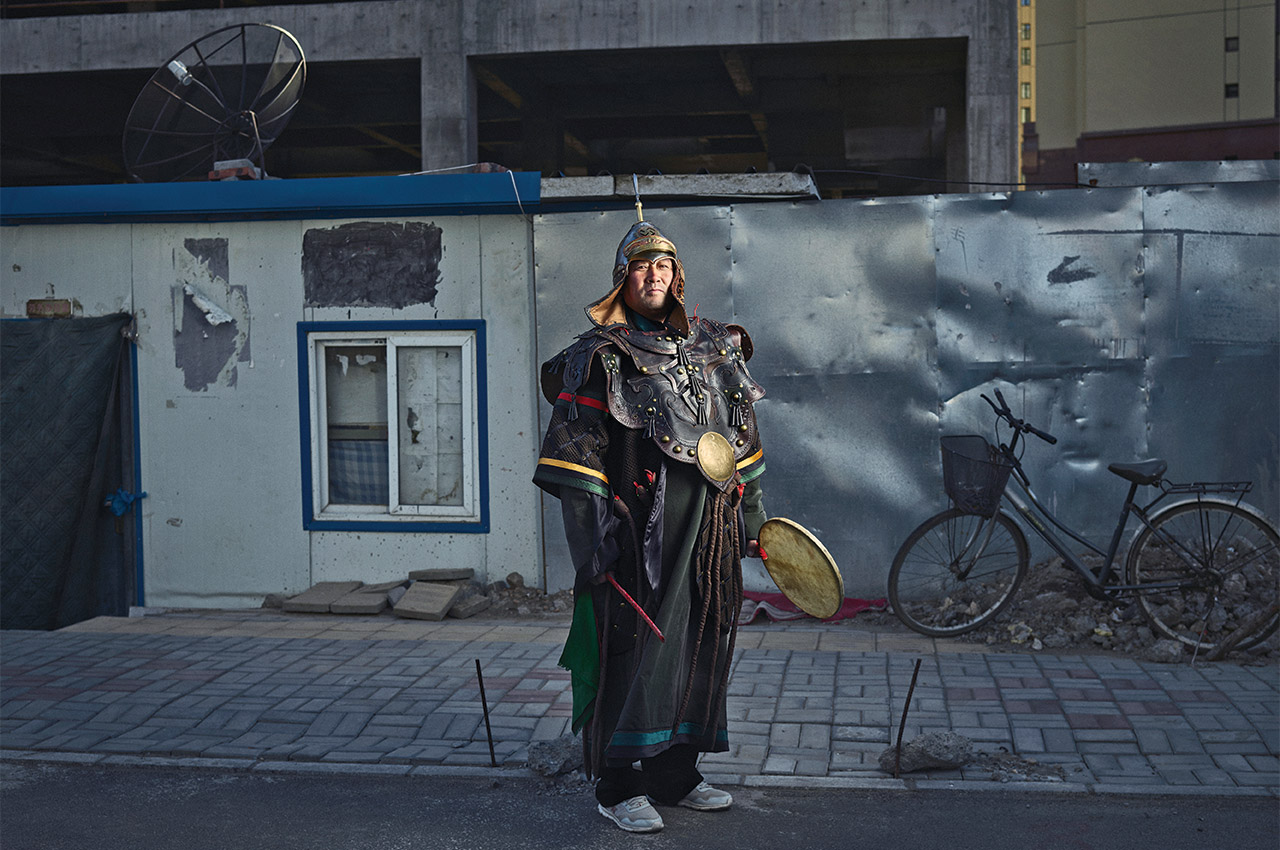 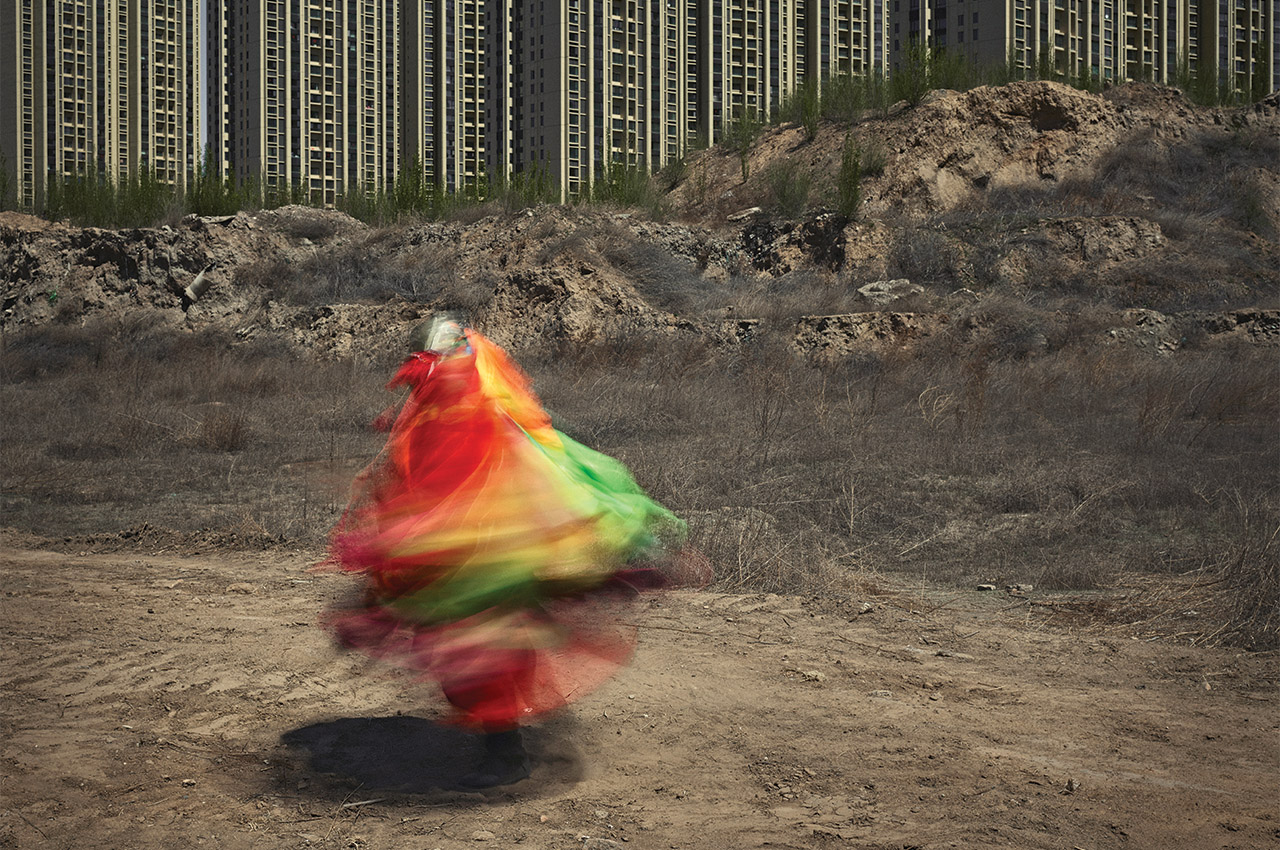 Lidafula, 46, a shaman master standing in front of a demolition site in Hohhot, wears a garment with red snake ornaments crawling out from its folds.

Bai Aolao gave Hermann a rare glimpse of an outdoor ritual — chanting and humming for more than half an hour before he entered into a state that caused him to almost vomit and foam at the mouth. This left him completely depleted, collapsed on the ground, his face covered with sweat. He told Hermann that it was the second time he had ever “crossed over” in the outdoors. 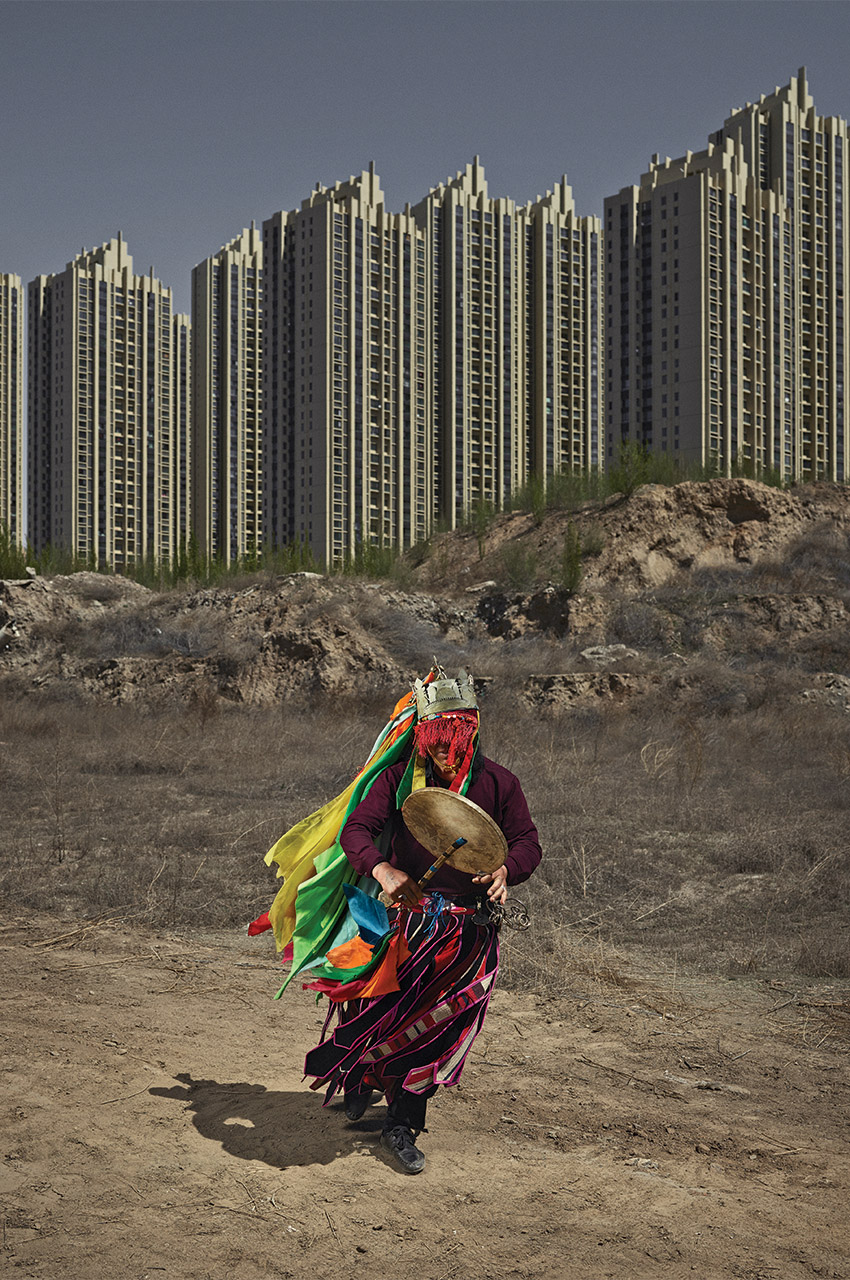 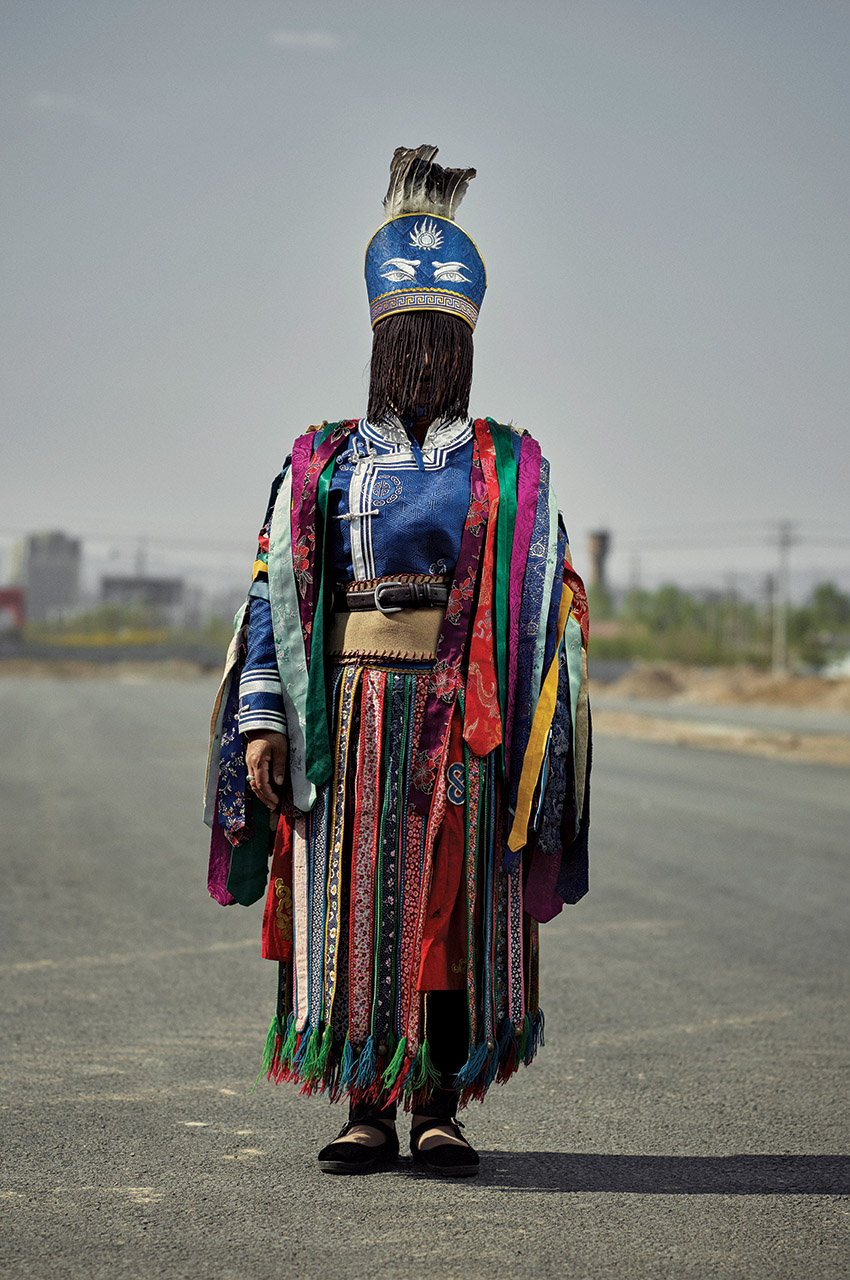 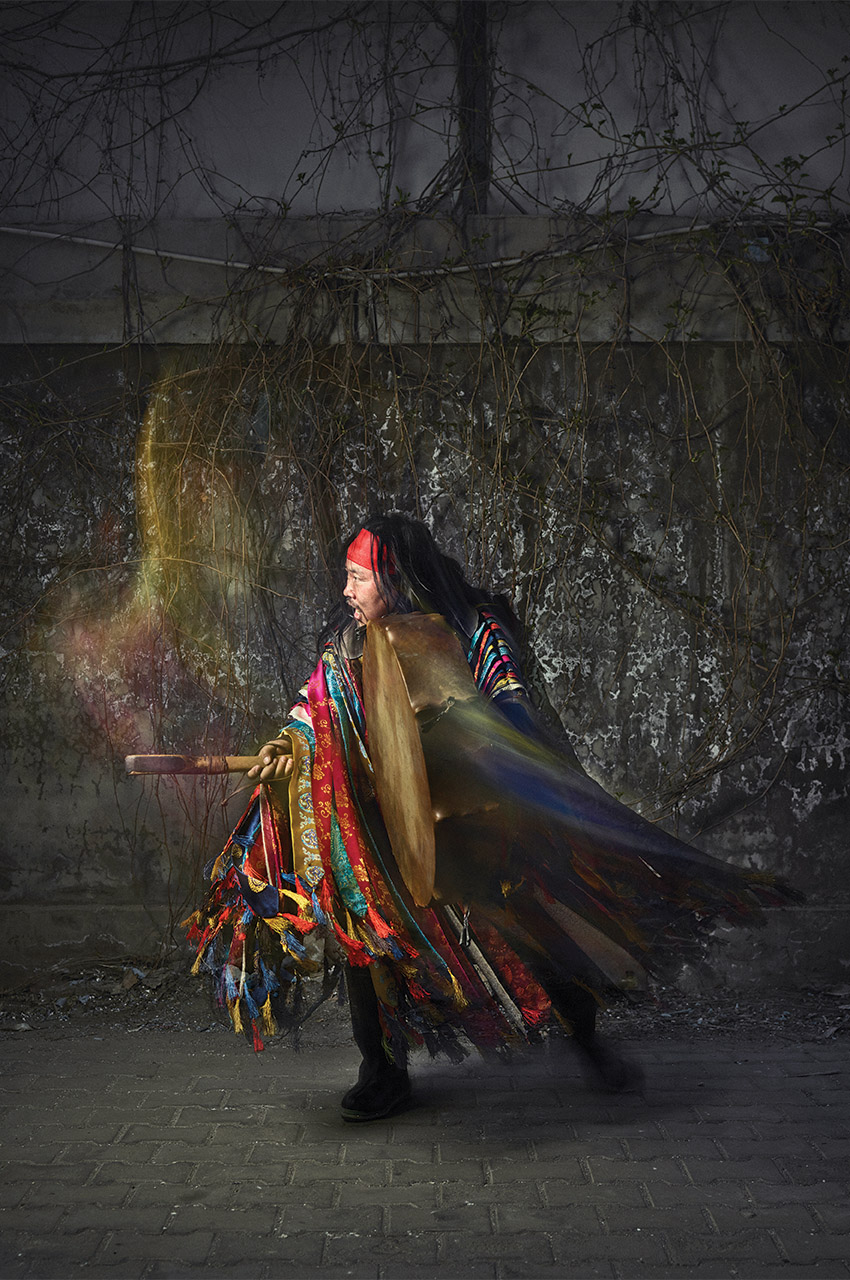 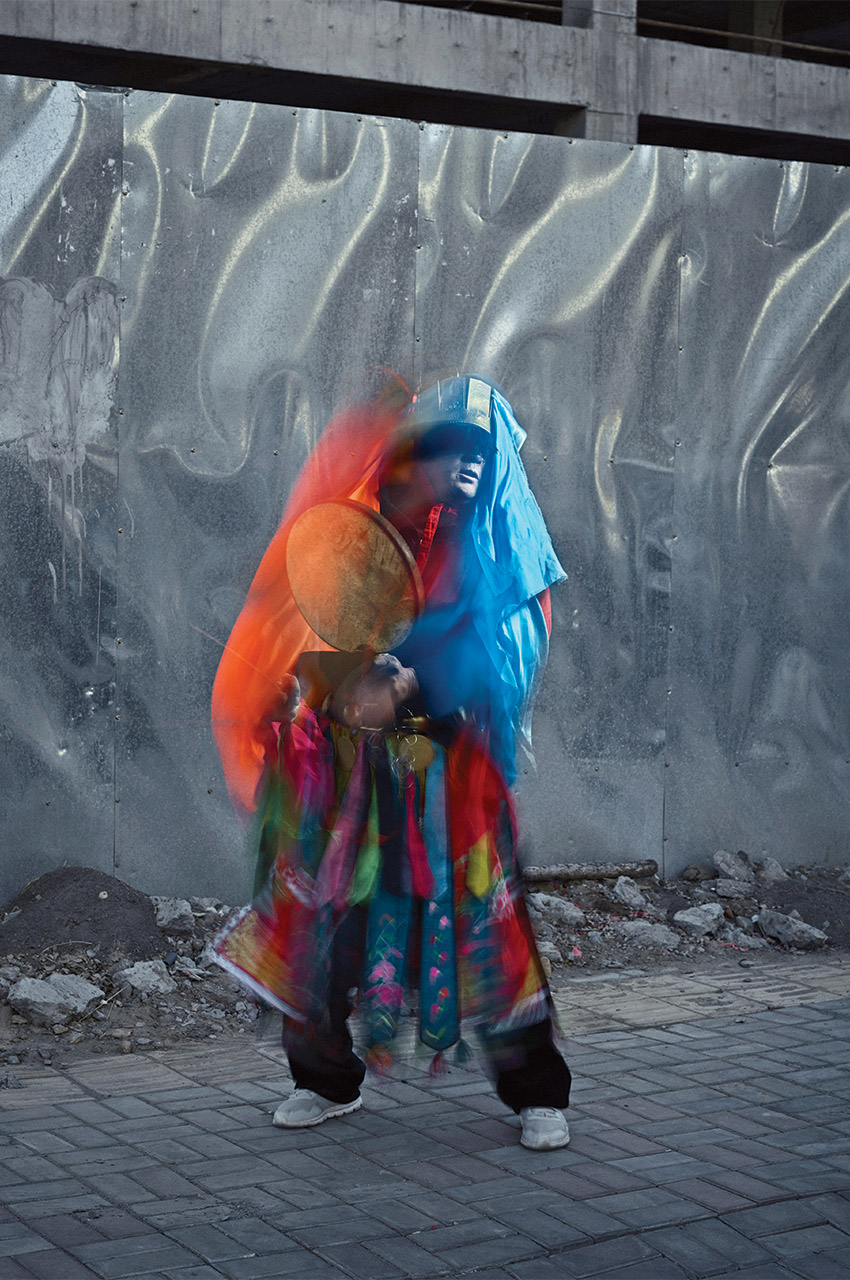 Bai Aolao, a 45-year-old shaman master who has been practicing for more than 30 years,  beats his drum in front of sprawling residential buildings, most of which are empty, on the outskirts of Hohhot. Although the city is home to almost 3 million people, many of its apartments are uninhabited, representing a larger problem brought about by China’s building boom.

Buren, 49, runs the hospital where Hermann photographed some of his subjects. Now a shaman master, he came from a poor family and studied martial arts before he discovered the craft. He bangs his drum in an empty alley behind his hospital. 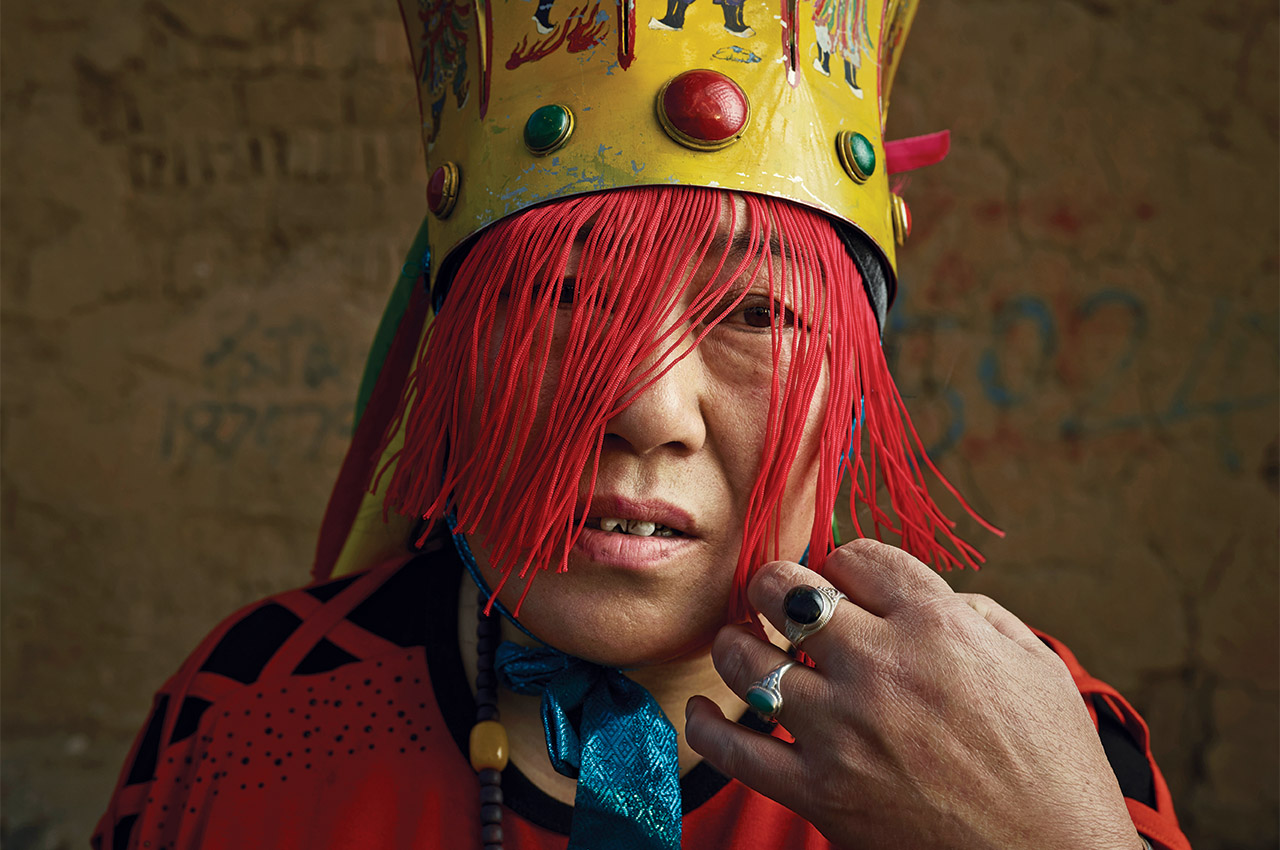 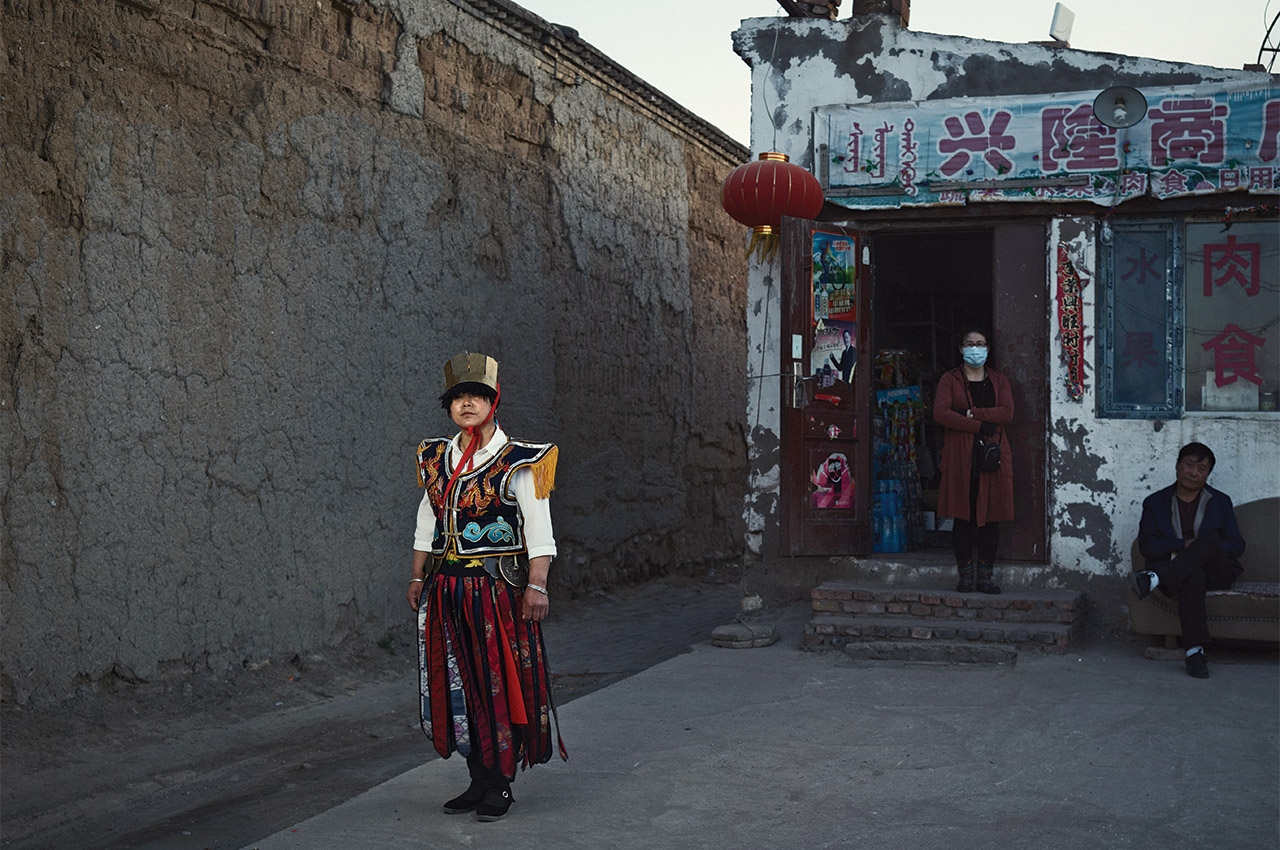 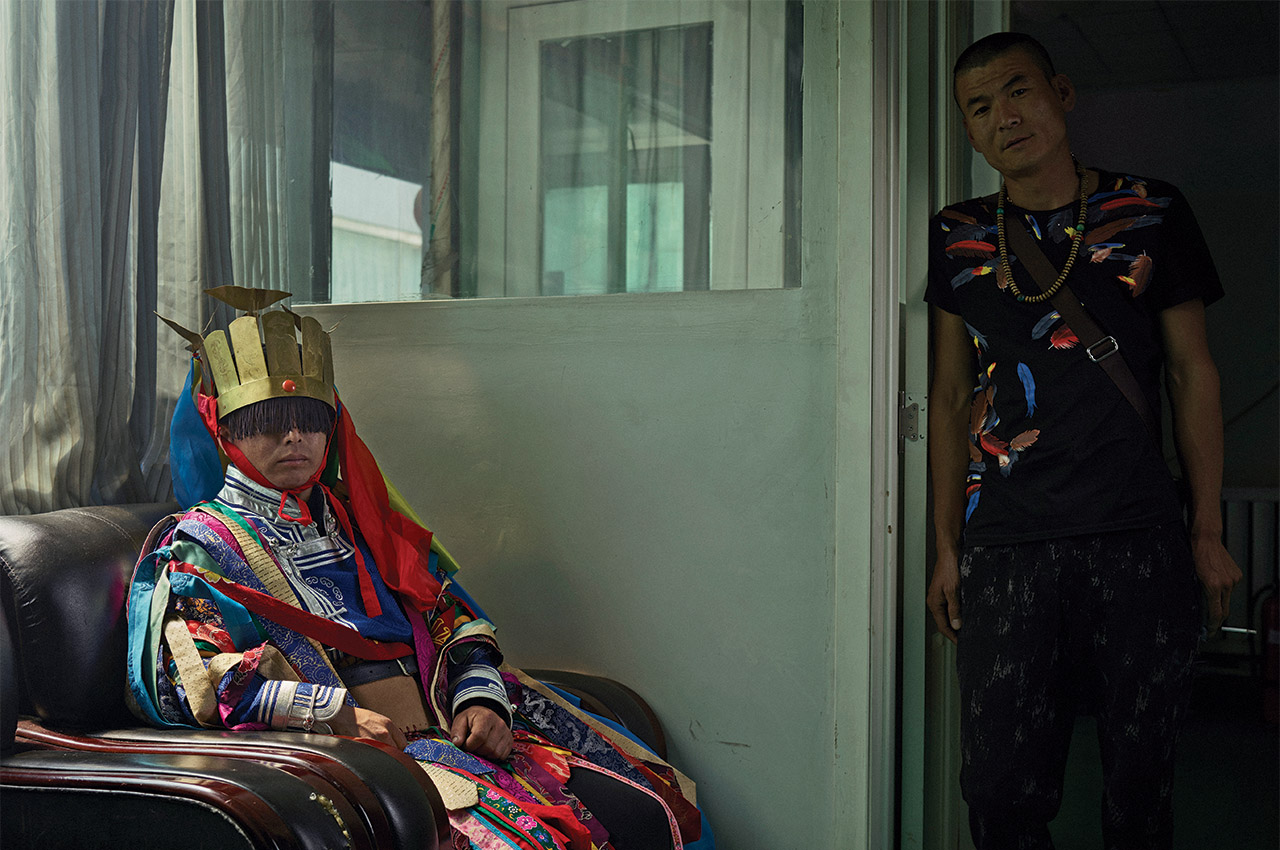 Fenglan, 45, looks at the camera as she pulls her hand through the tassels on her helmet.

Bao Kaihua stands in front of an old shop that survived the country’s reconstruction campaign.

Eledenfbala, one of Bao Kaihua’s students, sits in a hospital room wearing his traditional shaman clothing. To his right is Manda, who connected Hermann to all the shamans in the area, smoking a cigarette. Hermann said it was easy to pick out the students during rituals. “It didn’t come as naturally to them,” he said. The students shuffled about, banging instruments and chanting, as the masters endured seizurelike convulsions, spitting and sweating as they connected to the spirit world.

The rebirth of this traditional practice has contributed to a kind of recovery of a lost history, becoming not only a source of regional pride but also an avenue of professional opportunity in a Chinese state that has long struggled with unemployment. Some, like Bai Aolao, practice in urban sprawls, where grocery stores and highways converge with shaman-run clinics.

Photographer Ken Hermann captured this confrontation of spirituality and streetscape when he traveled to Hohhot in the summer of 2016, setting the age-old shaman tradition against the backdrop of industrial China.

Along with their colorful robes and evocative ritual dances, Hermann observed shamans as they nursed patients with broken bones and open wounds. But Hermann noted a key element. “If you want to get cured by a shaman, you have to believe in it yourself,” he said. “You really need to believe in it.” 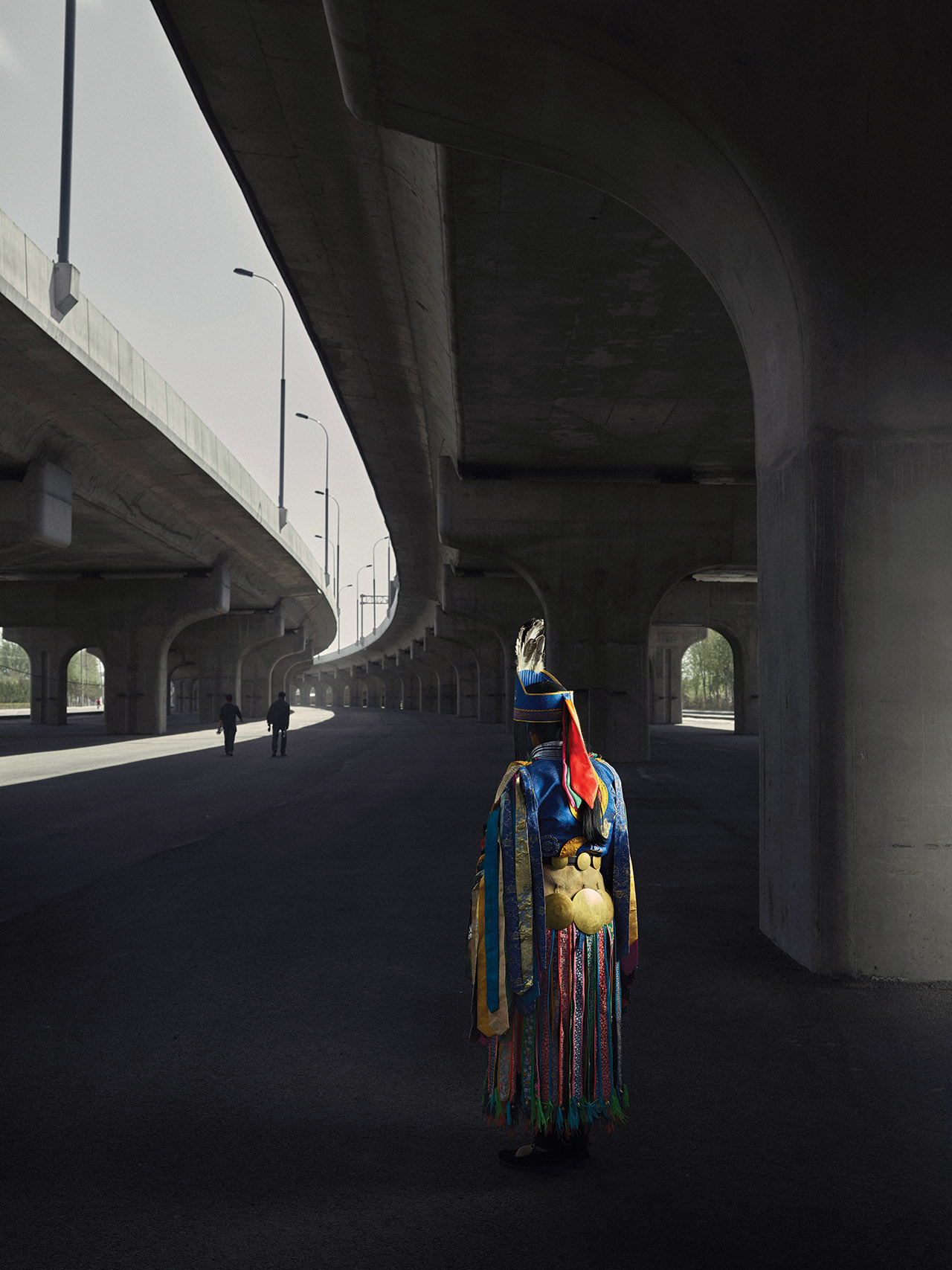 Shaman master Bao Kaihua, 46, stands under a highway on the outskirts of Hohhot. Traffic there is rarely an issue because of the number of roads the Chinese government built, Hermann said. She is wearing her own dress and armor.

Ken Hermann is a Copenhagen-based photographer. His work has appeared in National Geographic, Wired, BuzzFeed, and the Guardian.

A version of this article originally appeared in the July/August 2017 issue of  FP magazine. Subscribe to FP Premium to receive the print edition.

Will Russia Kill the OSCE?

Moscow is derailing peacekeeping missions and disrupting the budget process, threatening an organization that is vital to European security.