The Next AIDS Pandemic

Funding cuts to key U.S. programs that support medicine and treatment are coming. And with a booming African population and drug-resistant strains on the rise, the future is grim.

Thousands of HIV/AIDS experts are gathered in Paris this week for their biennial world conference, and leaders are exhorting every one of them to fight for global financing and expand access to treatment, especially in Africa. But the world cannot treat its way out of AIDS, and without a revolutionary breakthrough in either vaccines or the entire model of HIV control, a massive second global wave of AIDS will come, perhaps within the next 10 years.

Three problems are driving the global fight against HIV into a new danger zone. First, new infections increasingly involve forms of the virus that are already resistant to the primary drugs used to treat and prevent HIV infection. Second, the world is fast approaching the limits of manufacturing capacity for anti-HIV first-line drugs, and the ceiling is far lower for second- and third-line treatments. And third, there aren’t sufficient financial resources applied to the AIDS problem now, and signals from major donors — especially the U.S. government — offer a grim future of diminished resources and greater demands on very poor countries to finance their own HIV fights without outside help.

The AIDS pandemic is swelling

The Joint United Nations Programme on HIV/AIDS, or UNAIDS, reckons 36.7 million people are living with HIV today: More than half of them are on drugs that, when used properly, hold the virus at bay, blocking progression to full-blown AIDS and decreasing the odds that they will pass the virus onto their sexual partners or via drug use. Thanks to that treatment, substantially paid for by U.S. taxpayers, death rates have plummeted from a 2005 annual high of nearly 2 million to about 1 million in 2016. But half of the HIV-positive world is still in need of those life-sparing medicines. And despite having 19.5 million people on the medicines, the new infection rates haven’t improved: Roughly 2 million more people are added every year to the HIV-positive population that need medication and can spread the virus to others.

Simple math illustrates the problem: If 36.7 million were living with HIV in 2016, and 2 million more become infected annually, by 2020 the pool will swell to 44.7 million, minus the annual death rate, bringing the total to 40.7 million. By 2030, if the world continues to muddle through using the same approach and funding to the HIV problem, there would be nearly 54 million people living with HIV — all of them in need of daily medications. 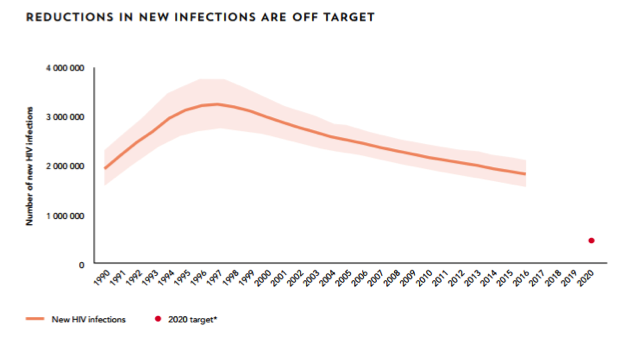 Even that grim forecast is probably too rosy, as increasingly the forms of HIV spreading to the newly infected are drug-resistant. A new World Health Organization survey estimates that in some countries roughly 10 percent of the people who start antiretroviral therapy have a virus that defies easy treatment, greatly increasing the costs of care and diminishing treatment success. At the dismal 10 percent rate, controlling HIV worldwide over the next five years will cost an extra $650 million in second-line, more expensive drugs, and the medicines will fail more often, increasing the death toll by 135,000 and allowing an additional 105,000 new infections. The WHO drug resistance estimates are based on new cases diagnosed in Argentina, Guatemala, Namibia, Nicaragua, Uganda, and Zimbabwe. A 2015 survey of newly infected Mexican patients found that 14 percent had drug-resistant viruses. A London School of Hygiene and Tropical Medicine 2016 analysis of African patients whose treatment was failing found that 16 percent of them carried viruses that were multidrug-resistant, meaning they already needed third-line therapy.

There are hopeful signs in wealthy countries where anti-HIV drugs are free and fully available. Switzerland, for example, seems to have zeroed out the spread of drug-resistant HIV. Comparing HIV-positive patients in Europe with their counterparts across Africa, researchers find a lifelong probability that 20 percent of Europeans will acquire resistance to the most important first-line treatment, tenofovir — but 60 percent of Africans develop tenofovir resistance. It’s not clear where all this drug resistance is coming from, but tenofovir is used widely by sexually active young adults as a prophylaxis, taken to block infection. Widespread use, especially in the Western gay community, has resulted in documented emergence of multidrug-resistant HIV strains. But in places like San Francisco, where prophylactic use by uninfected gay men is common, new infection rates plummeted by 17 percent just in the year 2015.

Production capacity is almost maxed out

Most of the 19.5 million people alive today thanks to tenofovir and other anti-HIV drugs are beneficiaries of more than a decade of political and economic breakthroughs that have brought the costs of these medicines down to pennies per day, with most of the global supply manufactured by four Indian generic makers and one publicly controlled Brazilian company. By 2013, manufacturers insisted the price was “at the bottom” and production was no longer profitable.

In addition to profit disincentives, the possibility of expanding drug production into other regions, such as sub-Saharan Africa, is limited by a paucity of technical and managerial personnel and scientific expertise. Combined global production capacity for affordably priced anti-HIV drugs hasn’t much improved since 2012, though patent manufacturers enjoy a booming market and profits in the European and North American markets. California-based Gilead, the lead patent-based maker in the world, sold $3.5 billion worth of its top anti-HIV drug, Truvada, in 2015, and sales growth has been steady ever since. But Paul Stoffels, the chief scientific officer for Johnson & Johnson, warns that with or without profit potentials the world’s manufacturers simply cannot sustain 40 or 50 years of manufacturing sufficient anti-HIV drugs to keep 35 million, much less more than 50 million, people alive. As individuals develop resistance to the cheap first-line drugs, each new category of anti-HIV chemistry gets more difficult to make, more costly, and carries more risk of dangerous side effects that require expensive monitoring and care.

The two largest purchasers of anti-HIV medicines are the Global Fund to Fight AIDS, Tuberculosis and Malaria (“The Global Fund”) and the U.S. government’s President’s Emergency Plan for AIDS Relief, or PEPFAR. The Global Fund, which receives financing from multiple sources including the U.S. government, covered the costs of medicines for 11 million people in 2016 while PEPFAR directly supported treatment for millions more. Without considerable increases in both the Global Fund and PEPFAR, it is doubtful any purchasing mechanism could lure more generic manufacturers to the HIV problem or boost affordable production in the patented sector.

UNAIDS imagines that poor and middle-income countries will boost domestic spending on HIV by 450 percent and 530 percent, respectively, over the next three years, offsetting the predicted collapse in wealthy nations’ support. Médecins Sans Frontières calls this “highly unrealistic,” noting that African economic development is stalled and that few of the HIV hardest-hit countries have health budgets that could even begin to address their epidemics.

UNAIDS projects a stark mismatch between the rising need for treatment funding and the most optimistically projected donor support for the next three years. 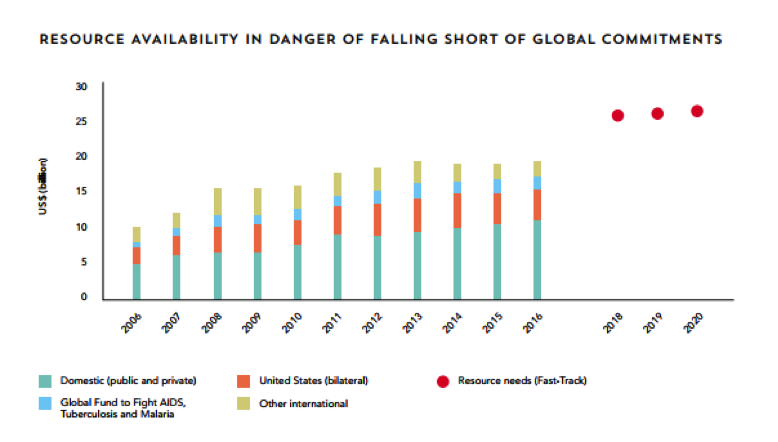 Hoped-for alternatives to decades of future treatment-based AIDS programs require research funding for vaccines, curative treatments, and better methods of preventing infection. But the global R&D budget has been declining since 2012. The White House’s proposed 2018 budget would slash the National Institute of Allergy and Infectious Diseases, America’s primary funder of HIV research, by $838 million and the overall National Institutes of Health by almost $6 billion. The umbrella organization for all of the world’s HIV groups, the International AIDS Society, argued this past weekend that the cuts would result in “catastrophe” and “lost lives.”

The entire world seems on tenterhooks, awaiting the final decision on the 2018 U.S. government budget, unlikely to be determined before late September. President Donald Trump released his proposed budget in March, indicating enormous cuts in all forms of foreign assistance were expected, including for PEPFAR and global health programs. In announcing the White House budget proposal, the director of the Office of Management and Budget, Mick Mulvaney, said the president is “going to spend less money overseas.… There’s a very deliberate attempt here to send a message to our allies and our friends, such as India, and our adversaries, other countries, shall we say, which is that this is a hard-power budget; that this administration intends to change course from a soft-power budget to a hard-power budget. And that’s a message that our adversaries and our allies alike should take.”

On July 19, the House Appropriations Committee approved a foreign operations budget less odious than Trump’s request but still challenging for the future of HIV/AIDS programs. The White House hoped to slash global health programs by some 24 percent, or $2 billion, along with drastic cuts in the overseas efforts of the Centers for Disease Control and Prevention (CDC). The House appropriators settled on an overall 5 percent reduction in global health programs and held U.S. support for the Global Fund and PEPFAR, as well as funding for the CDC, stagnant at fiscal year 2017 levels.

From all sources, donor support of HIV programs in 2016 fell to $7 billion, a nadir not seen since 2010. Most of the decline reflected downturns in U.S. government bilateral and multilateral support. Dependency on U.S. aid is a serious vulnerability for the entire future of worldwide control of HIV/AIDS. The United States contributed $4.9 billion in 2016, or 71 percent of global support. It was followed by the United Kingdom ($646 million), France ($242 million), and the Netherlands ($214 million). Even at the most optimistic levels, these other donor nations can’t make up the difference.

The original pandemic started small in the 1980s, seemingly confined to marginalized communities — hemophiliacs, gay men living in key Western cities, and intravenous drug users — but it swelled to claim millions of lives. With 10 percent of newly infected cases involving drug resistance, and both R&D and drug production capacity hitting limits, a handful of cases could quickly become hundreds of thousands. Some of Africa’s largest HIV epidemics, such as in Swaziland, Tanzania, and South Africa, are only in 2017 managing to bring the numbers under treatment to sufficient scale to imagine controlling and reversing the AIDS scourge. This is a fragile moment.

African nations have the youngest populations on Earth, with 40 percent of the continent’s population under 15 years of age. A population explosion is unfolding, predicted to more than double the number of Africans by 2050, topping 2.5 billion people. A youthful population is adventuristic, risk-taking, and vibrant — but also dangerously self-destructive. The very activities that put people at risk for acquiring HIV are inherently elements of an urbanizing, sexually active youth-dominated milieu. Most of the 36.7 million people living today with HIV reside in southern and eastern Africa. If those now receiving daily anti-HIV drugs are no longer able to access treatment, they will swiftly become infectious to their partners.

Without an effective, affordable vaccine, the toolkit for slowing a second HIV pandemic is limited to the same marginally effective one that brought us millions of infections in the 1990s: condoms, sexual abstinence, sterile needles, safe blood transfusions, and a constant deluge of warnings to the youthful public.

If the world isn’t willing and able to not merely stay the course, but expand support for treatment and R&D, it is hard to imagine any way out of the grim pandemic scenario. For those of us who chronicled the first HIV pandemic and witnessed entire social groups and societies in the throes of AIDS, the prospect of a second wave is gut-wrenching and hideous beyond contemplation.

Laurie Garrett is a former senior fellow for global health at the Council on Foreign Relations and a Pulitzer Prize winning science writer.