What to Do With a Heinous Statue

Lessons for Trump from post-Nazi Germany and post-Soviet Eastern Europe.

All across the southern United States, sometimes in the dead of night, statues are falling. In the days since the violent clashes in Charlottesville, Virginia, last weekend, over the fate of a statue of Confederate Gen. Robert E. Lee, activists in Durham, North Carolina, have used ropes to tear down a statue of a Confederate soldier outside the city’s former courthouse; authorities in Baltimore moved in the early hours to take down the city’s Confederate monuments; and the mayor of Birmingham, Alabama, where state law prohibits the removal of a Confederate monument from a city park, ordered it covered up with plastic.

The responses of many conservatives have been condemnatory. Commentator Scott Greer accused protesters of attempting to “wipe out any pride Southerners should have in their heritage.” In a Tuesday statement, President Donald Trump argued that the removal of these monuments amounted to “changing history,” adding, “I wonder, is it George Washington next week?”; on Thursday, he doubled down, tweeting that “the history and culture of our great country” are “being ripped apart” by those who wish to see the monuments gone. Those arguing that the statues must come down have been equally fierce: “You can’t force hurt and the reminders of hurt on a people who were suffering,” said James Muwakkil, the president of the Lee County, Virginia, chapter of the NAACP. “Robert E. Lee does not reflect the America that we live in.”

At the heart of this debate is the question of how we treat hurtful or damaging aspects of our heritage. While America’s slaveholding history has a particularly painful resonance, the United States is not alone in struggling with monuments to a violent past. Many countries are obliged to constantly strike a balance between removing monuments that honor the reprehensible and maintaining them as sites of memory. Each situation has its own specific context, but some examples suggest a way forward for how to grapple with America’s fraught history.

The dictatorships of the past teemed with relics. If you walk through Budapest’s Memento Park today, you’ll see the towering edifices of a bygone age: statues of Vladimir Lenin, Karl Marx, and Hungarian communist leaders, all quietly oxidizing among the trees. Here, the ghosts of Hungary’s past are gathered together and, rather than being magnets for protest, draw groups of tourists, who walk through the detritus of recent history.

And yet the site recalls an acutely painful memory for the Hungarian people. The country was the stage for the first true rebellion against Soviet rule in Eastern Europe — the October Revolution of 1956 that was crushed with Russian tanks on the streets of Budapest. During the uprising, 2,500 Hungarians died in a matter of weeks, with 200,000 fleeing as refugees.

The rebellion was crushed, but even as the country continued to suffer under a new Soviet-imposed government, one iconic moment of the uprising remained alive in the public imagination: the day citizens marched on Budapest’s city park and tore down the 25-meter statue of Josef Stalin that towered over the city, leaving only the dictator’s feet remaining. 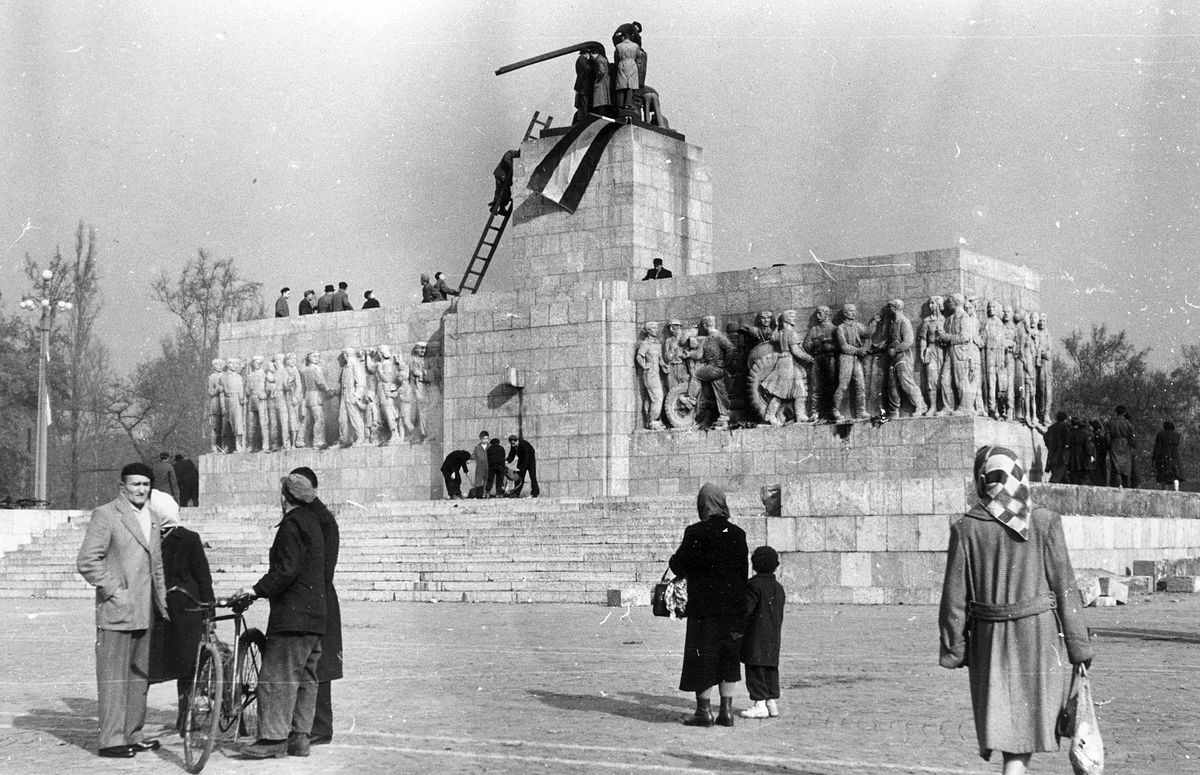 In Budapest, as in many of the countries of the Warsaw Pact, Stalin statues had sprung up everywhere in the decades between 1930 and 1950. When the statue was first built, the Hungarian state media described it as a symbol of Stalin’s ever present influence in Budapest. “Stalin was with us earlier,” one journalist gushed. “Now he will be with us even more. He will watch over our work, and his smile will show us the way.” Its toppling marked a symbolic refusal of Stalin’s legacy only three years after his death.

In honor of this moment, one of the centerpieces of Memento Park today is a modern recreation of the ruined statue, known as “Stalin’s Boots.” The new, recontextualized monument inverts the traditional role of the statue — that of glorifying and celebrating. It points instead to an absence, with a note of humor. It makes ridiculous what once was a stamp of power. 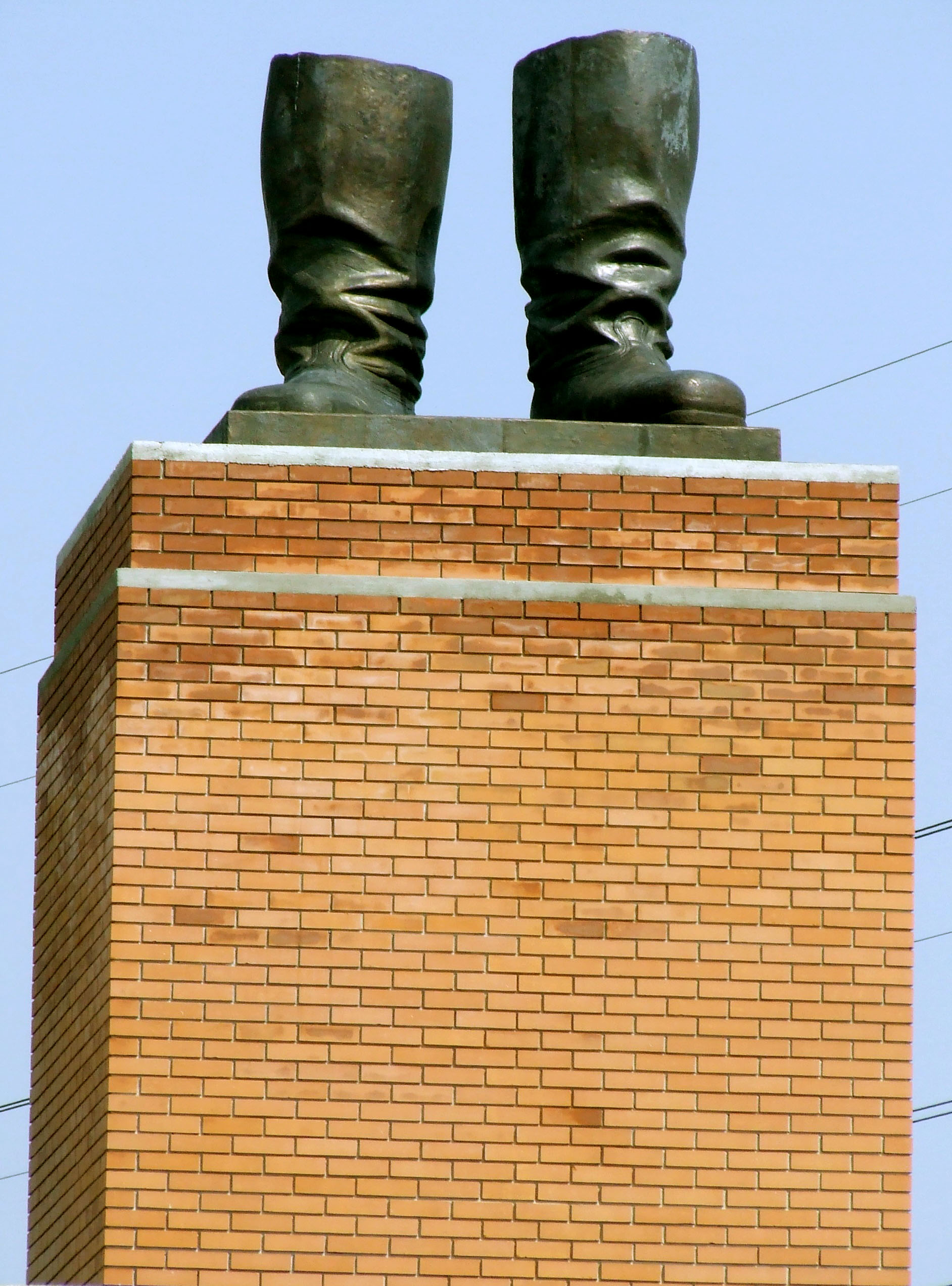 In the years following World War II, German authorities grappled with the question of what to do with the monumental remains of the Nazi regime. The Nazis didn’t build small. Impressed by the ruins of Rome (which he visited in 1938, at Benito Mussolini’s invitation), Adolf Hitler commissioned his favorite architect, Albert Speer, to design enormous edifices based on classical designs. The Führer was planning ahead: “If Berlin were to meet the fate of Rome,” Hitler wrote, “the coming generations could one day admire the department stores of Jews and the hotels of some corporations as the most imposing works of our time, the characteristic expression of the culture of our days.”

In response to Hitler’s fears, Speer developed a theory of Ruinenwert, or “ruin value.” In his memoirs, Speer recounted how “Hitler liked to say that the purpose of his building was to transmit his time and its spirit to posterity. Ultimately, all that remained to remind men of the great epochs of history was their monumental architecture, he remarked. What then remained of the emperors of the Roman Empire? What would still give evidence of them today, if not their buildings.… Our buildings must also speak to the conscience of future generations of Germans.”

This philosophy of architecture is particularly embodied in Speer’s Zeppelin Field grandstand at Nuremberg. Based on the Grecian Pergamon Altar still on display in Berlin, but blown up to enormous proportions and faced with blank limestone, this edifice held the podium from which the Führer spoke to crowds at his annual rallies. The architecture was designed to create what Hitler called “mass experiences.” The sharp symmetry and plain facades, along with the long wings of the building, intimidated onlookers and subdued feelings of individuality beneath the power of the state. 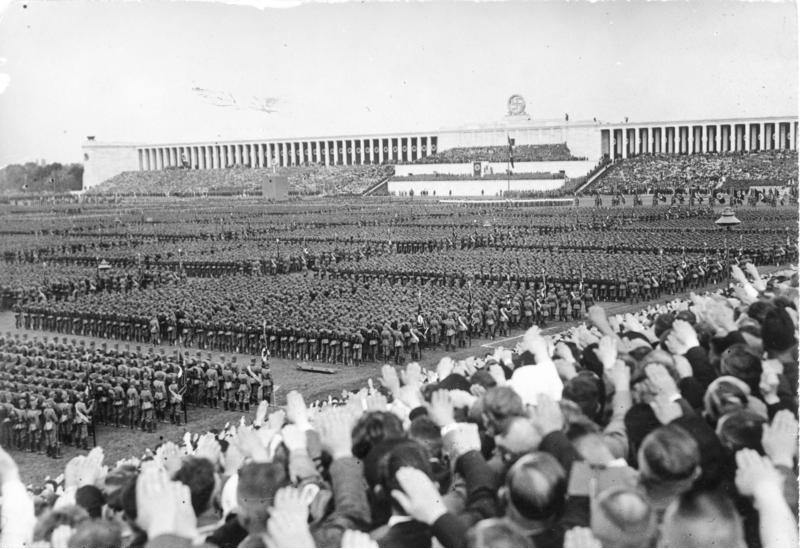 In the postwar period, German governments were determined not to erase the record of Nazi atrocities and saw the architectural remnants of Nazism as a key part of that record. However, it was unthinkable to allow Hitler’s spirit to remain in the buildings or for the Ruinenwert to be preserved and, as Hitler put it, “speak to the conscience of future generations.” This created a paradox: how to remember the past but remember without recreating its effects.

For the Americans occupying Berlin, the immediate solution was obvious:

Later, however, German authorities went further: The imposing wings of the grandstand were clipped, its ruin value neutralized. Sometimes monuments reveal hidden truths only in their moment of destruction. Today, the grandstand seems to speak to the intellectual poverty of National Socialist thought, its moral blankness reflected in those smooth limestone walls. 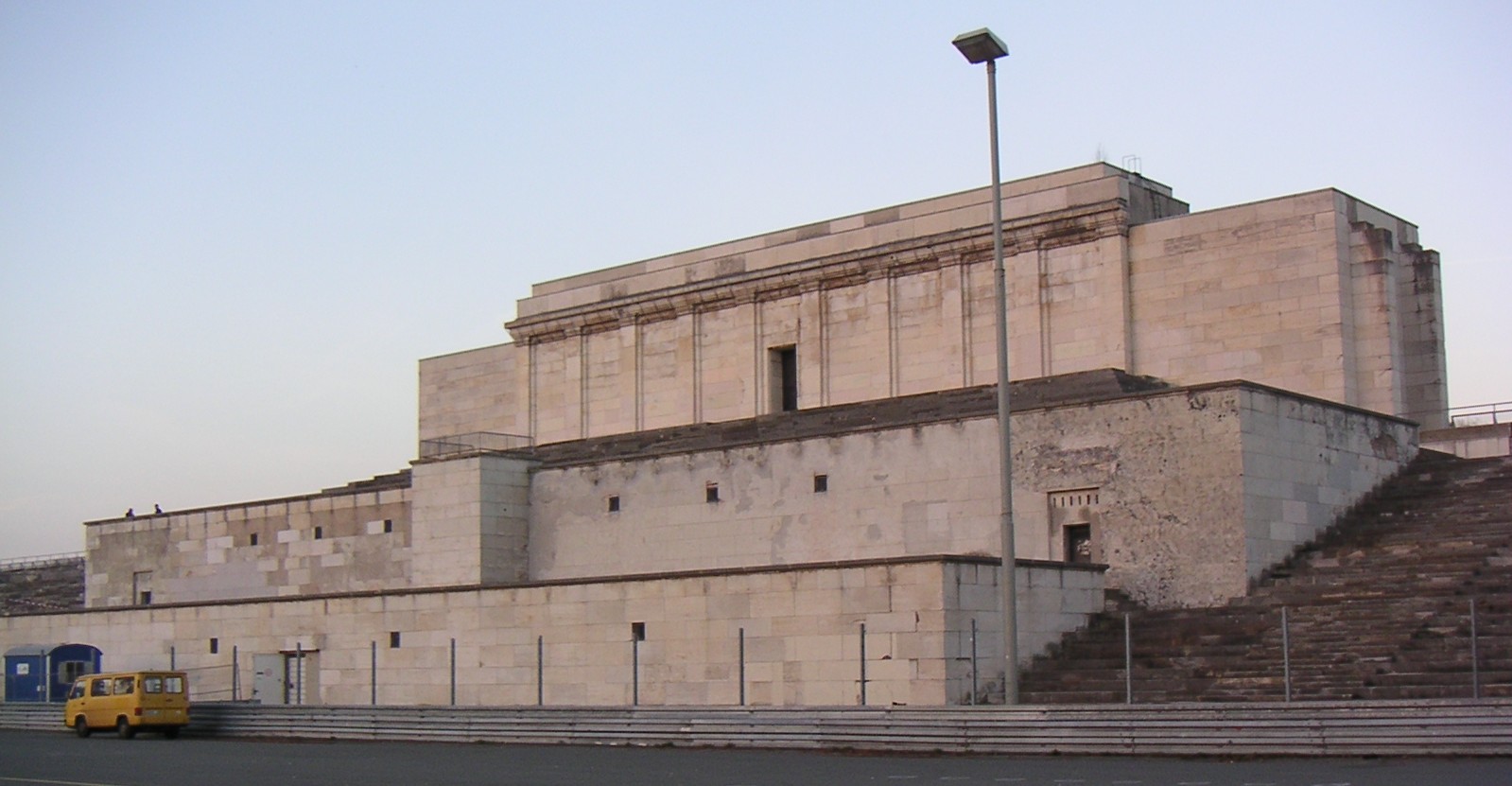 As the French historian Pierre Nora once quipped, “We speak so much of memory because there is so little of it left.” In the United States, ethnic minorities are largely denied sites of public memory, such as memorials and preserved buildings. As Nora put it, they possess “reserves of memory but little or no historical capital.” Black Americans instead walk through their own cities among the statuary of their former oppressors; there are thought to be at least 1,500 memorials to the Confederacy around the country today.

The clashes in Charlottesville that caused the death of anti-fascist demonstrator Heather Heyer began over the removal of a statue of Robert E. Lee. A Confederate general, Lee oversaw, among other campaigns, the invasion of Pennsylvania in 1863, which resulted in a “slave hunt,” during which freed former slaves (or “contraband”) were rounded up and returned to their “rightful owners.” However, the Charlottesville statue is not a Civil War-era relic, as some conservatives seem to suggest. It was erected in 1924, nearly 60 years after Lee finally surrendered. This was at the height of a rash of revisionist history surrounding the Confederacy and the war it fought in defense of slavery, and a huge number of these Confederate statues went up during this period. These statues coincided, too, with the establishment of the segregationist Jim Crow laws and a devastating campaign of racial violence and murder by the likes of the Ku Klux Klan. New Orleans Mayor Mitch Landrieu recently argued that “these statues were a part of … terrorism as much as a burning cross on someone’s lawn; they were erected purposefully to send a strong message to all who walked in their shadows about who was still in charge in this city.”

Like Stalin’s statue and the Zeppelin Field grandstand, these Confederate statues were designed with a specific effect in mind: to celebrate the cause of white supremacy in the United States and to shore up support for the relegation of black Americans to the status of second-class citizens. Many of the statues were built while American Nazis held rallies at New York City’s Madison Square Garden and some even later, during the fight for the Civil Rights Act in the 1960s. They were cheap and mass-produced, designed to evoke a noble history that never existed. That’s why, when the protesters toppled the Confederate soldier statue outside the former courthouse in Durham, the whole world saw it fold like a Coke can, bending into an unrecognizable crumple. Like the Nuremberg grandstand, it conveyed its true essence in the moment of its destruction — hollow, superficial, weak.

It’s not too difficult to imagine a monument park one day existing in the American South. All the crumpled statues of Jim Crow can line its verges, along with pictures of their crimes and information about the age of slavery in the United States. Or perhaps the statues can remain in their current positions and be recentered around their true context. (See one suggestion for what that might look like here.)

In Hungary and in Germany, these recontextualizations were only possible, however, because communities were able to agree on a new reading of history and a new way of seeing these monuments. This required a democratic understanding of public memory as an active force. Whether this will be possible in the United States amid the current atmosphere of extreme polarization is another question. And public memory, as it ever was, is a product of power: who holds it, who gets to remember, whose histories are privileged above others.

The false appeals to the immutability of recorded history among the Republican right are a symptom of Confederate nostalgia, for a time when America was an apartheid state. This is the “again” in Trump’s campaign slogan, and these statues are the cheap bronze tokens of that imagined past. This sort of nostalgia was once thought to be a sickness of the body, a matter for leeches and medicine, something to be drawn physically from the patient. If there is to be any justice in our conception of memory, the Confederate statues as they are around the United States must be drawn out of public life. They must either be radically recontextualized or they must be removed. Authorities must understand that if they do not offer a democratic way for this to occur, protesters will take matters into their own hands, as they did in Budapest in 1956 and as they did this week in Durham. Unless these steps are taken, the statues will keep on falling.

Paul Cooper is an author and is currently working toward a Ph.D. in ruin and memory studies. His first novel, River of Ink, was published in 2016. Follow him on Twitter at: @PaulMMCooper.
Tags: Donald Trump, Europe, History, North America