Are cross-cultural marriages the key to integrating a region?

ALMATY, Kazakhstan — As the sun sets over the city’s snowcapped mountains, Yerbolat and May Ospanov settle into the gray sofa. May slides her hands over Yerbolat’s, which lie clasped on his knee. Then, with a precision honed through countless recitations, they take turns listing the dozens of places they’ve lived together around the world before settling in Almaty, Kazakhstan’s largest city.

Happily married for nearly 20 years, the couple never expected to serve as a bridge for a cultural chasm. Their two homelands — China and Kazakhstan — share some 1,100 miles of border and an increasingly vital political relationship. Yet on the ground in Kazakhstan, distrust of Beijing’s designs on its Central Asian neighbor is rising.

Today, a small but growing number of Kazakh-Chinese couples may be helping to counter that tension: Their intimate understanding of each other’s worlds is chipping away at old prejudices and, arguably, furthering the transactional bilateral ambitions of their nations.

Yerbolat met May during a business trip to Hong Kong in 1994. The Soviet Union had collapsed three years earlier, and he was tasked with stocking a private department store from scratch in a newly independent Kazakhstan. May, a distributor in charge of selling excess stock for Chinese garment factories, traveled across her country with Yerbolat, touring plants and helping him fill orders to send across the western border. Three years later, they were married and living in Almaty.

“Not many Chinese women would have moved to Kazakhstan in 1997,” says May, turning to her husband with an audacious grin. “I think we are a little bit different. He is an unconventional Kazakh, and I am a very unconventional Chinese.” 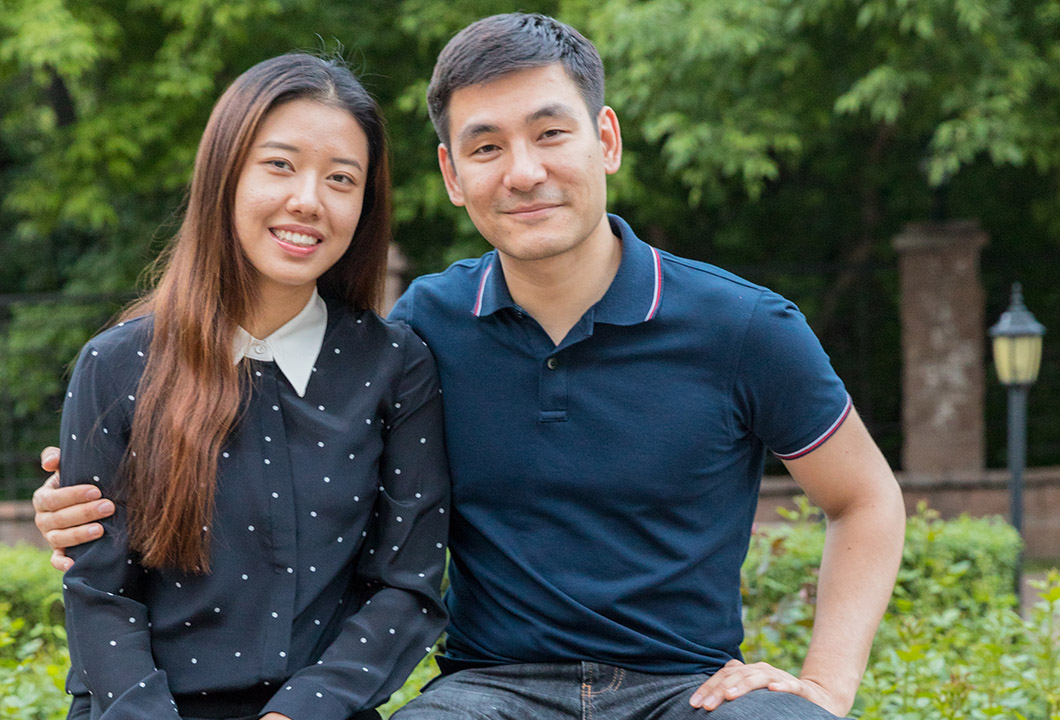 Qiudi Zhang and Askar Akhyltayev in Almaty, Kazakhstan in May.

Indeed, their affinity transcends an age-old current of Sinophobia that has resurfaced in Kazakhstan over the past two decades, as the pace of trade between the countries has accelerated into a high-profile dynamic shaped by state-owned giants. China has become the top foreign investor in Central Asia, with Kazakhstan welcoming Beijing’s Belt and Road Initiative — a multibillion-dollar infrastructure project, inspired by the old Silk Road, that has formed the backbone of Chinese President Xi Jinping’s foreign policy since 2013. At the same time, a growing and vocal segment of Kazakhstan’s population of 18 million has grown wary of Beijing’s ambitions in Eurasia: They fear that Chinese citizens are buying up farmland and seeking to control oil, gas, and other valuable natural resources in the country.

Such suspicions are amplified across social media and messaging platforms like Facebook, WhatsApp, and VKontakte — and, at times, have incited public protests. A proposal to lease a large area of land to China was dropped after demonstrations in 2010, and government plans to change the land code in the spring of 2016 sparked the largest episode of dissent in Kazakhstan since the dissolution of the Soviet Union 25 years earlier. The protests became a catchall to voice grievances against anything, including corruption and poor road conditions. Eventually Nursultan Nazarbayev, Kazakhstan’s autocratic president, bowed to the demonstrators by delaying the implementation of the new law while the country’s security services cracked down on lingering unrest. But mixed Kazakh-Chinese marriages and attendant questions of loyalty and land ownership have provided a talking point for nationalists, as rumors of a slow-motion Chinese colonization of Kazakhstan spread online and through tabloids. Official statistics on the exact number of mixed couples have been scarce, which has allowed lofty estimates to circulate. Online, many nationalists have called for Kazakh women to be stripped of their citizenship should they marry a Chinese national.

May says she hasn’t had too many unpleasant confrontations in Kazakhstan, but she “can often feel some strange eyes” following her when out on the street. Yerbolat notes that anti-Chinese anxieties run deep among Kazakhs, even if they remain unfounded. He blames a “fear of a big country neighboring from ancient times. It’s somewhere on the DNA level.” He also believes that the Chinese have become a convenient scapegoat amid an economic slowdown and currency devaluations that eliminated the savings of many average Kazakhs. Privately, some Kazakh officials admit that Sinophobia has become an outlet for popular frustrations. But, in public, the government downplays the discord. “[The] people of Kazakhstan are educated enough to understand how essential China is to the health of the global economy,” Kairat Abdrakhmanov, Kazakhstan’s foreign minister, told Foreign Policy. 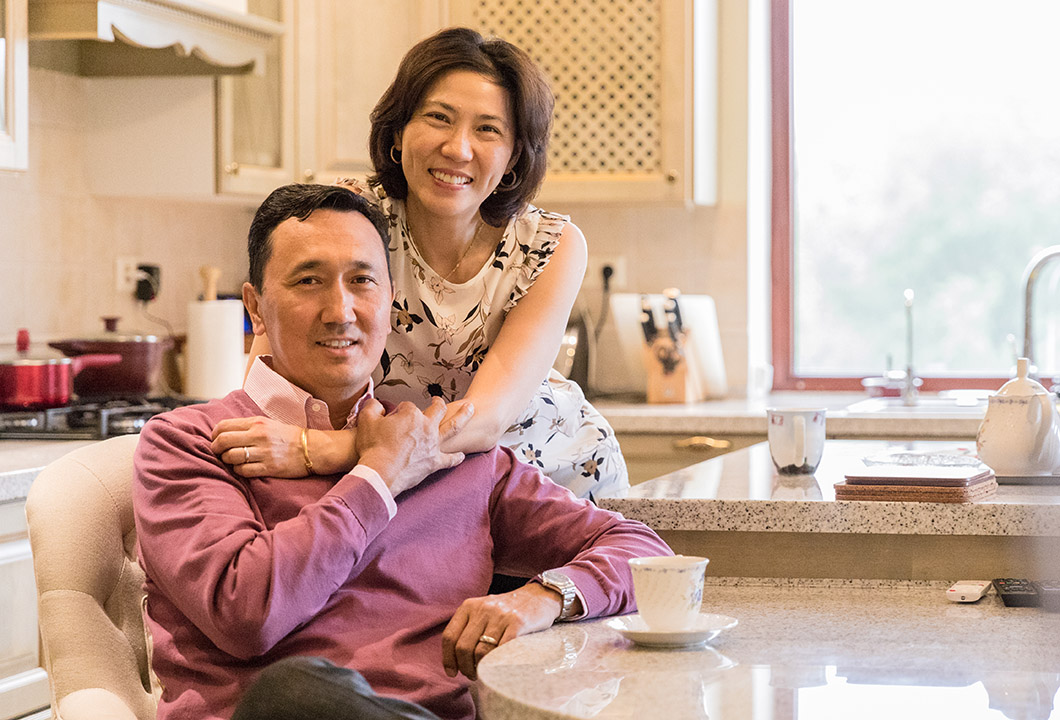 Yerbolat and May Ospanov at their home in Almaty.

Askar Akhyltayev and Qiudi Zhang, a Kazakh-Chinese couple in their 20s who met while studying at the University of Washington in Seattle, understand how fundamental that economic vigor will be to the prosperity of their union. “My parents used to be concerned about the lack of opportunity here, but there is more happening,” says Qiudi, a native of the Chinese city of Shenzhen. Couples like Askar and Qiudi are helping spur two economies and bind two nations that will surely grow more interdependent in the coming decades, as China pours billions of dollars into Kazakhstan’s economy.

That forward-leaning spirit is apparent for Benny Ng and Zhanar Akhmetova, who have thrived since moving to Almaty less than a year ago. Benny, born in Singapore, teaches business at a local college and consults for Kazakh companies. Zhanar, pregnant with their third child, runs a tour company for Asian clientele. The couple met in 2009 on the now-defunct social networking website Friendster. Their romance faced early opposition from some of Zhanar’s relatives, who were against her marrying a non-Kazakh, but her family has come to appreciate Benny’s vibrant and jovial personality — and also their financial success as a couple. “My mother-in-law still teases me that I need to give her sheep and horses,” says Benny, referring to the bride price in a traditional Kazakh wedding. 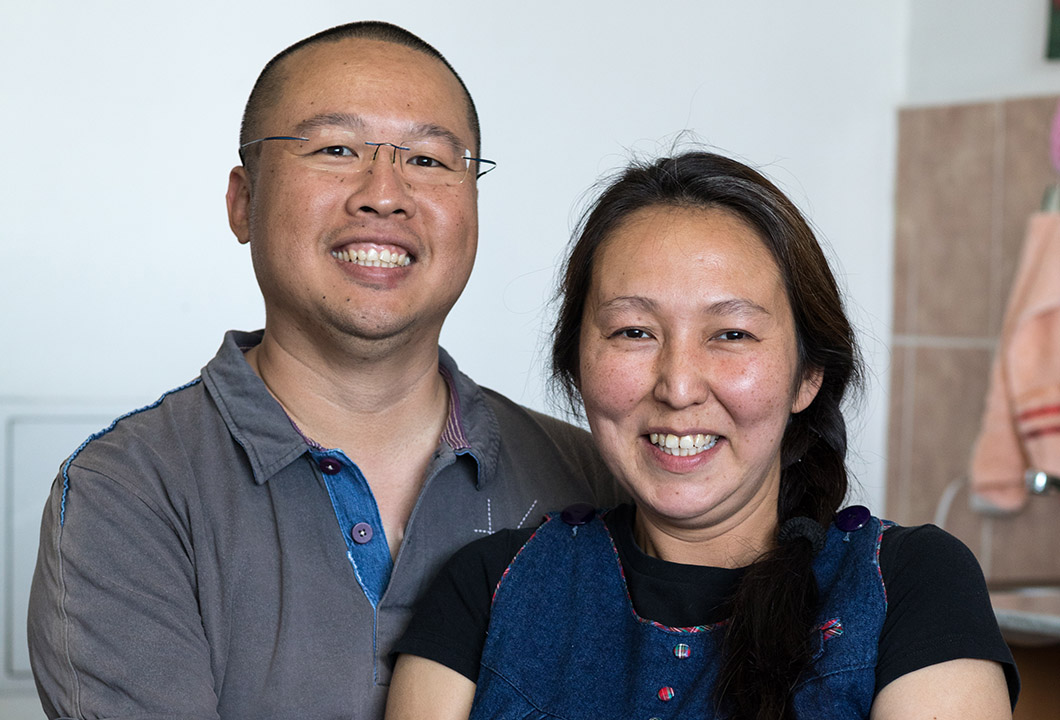 Even in their short time spent in Kazakhstan, Benny and Zhanar say they have seen the country change. Kazakhstan is becoming more international — and the couple want their children to benefit from this cosmopolitanism. Their kids all have Kazakh first names and Chinese last names; they speak English with their parents, learn Russian and Chinese privately, and communicate in Kazakh with their caretaker.

“The idea,” says Benny, summing up an ethos that may soon become more prevalent in Kazakhstan, “was to have a very international family.

Reid Standish reported this story while on a fellowship with the International Reporting Project. It first appeared in the September/October 2017 issue of FP magazine.