The Things They Carried: The Iraqis Who Fled Mosul

Escaping war and the Islamic State, families took with them what little they could carry — remembrances of loved ones and the past.

Standing by the rows of tents that line the dusty plains of northern Iraq, groups of men and children cover their faces from the searing sun. Twenty-five miles to the west, their home city of Mosul lies in ruins after a brutal nine-month battle between Iraqi forces and Islamic State fighters. The house-to-house fighting and aerial bombardment reduced entire neighborhoods to blackened heaps of rubble. The mass of decaying bodies lying beneath the debris piled along Mosul’s streets creates an unbearable stench of death that moves back and forth with the breeze. For now, these families have taken refuge outside the city, here at Khazer camp.

During the nearly endless rounds of fighting that resulted in thousands of civilian casualties, according to unofficial estimates, some 846,000 people were displaced from their homes in the city. As families fled, they took with them what few possessions they could carry. While some managed to leave with livestock or even cars, many others left with nothing more than the clothes on their backs.

Often, there is little function or utility to these items — a broken watch, a child’s garment, a handful of worn photographs. They are tokens of the life — and the people — they left behind. 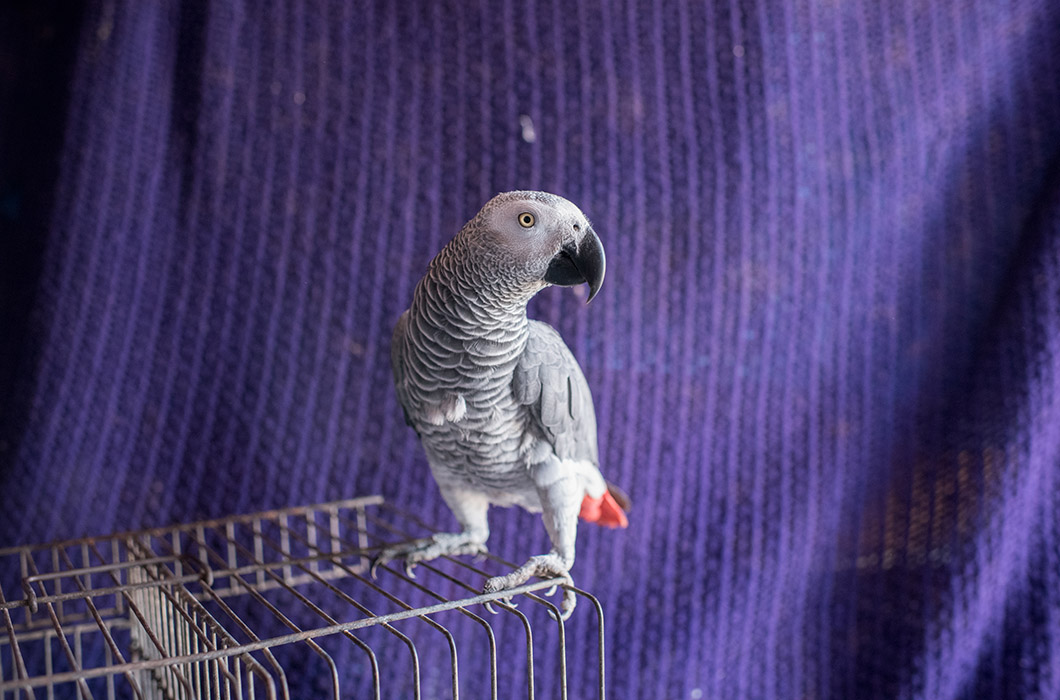 Kasim fled Mosul with his family in the middle of November 2016 after an airstrike destroyed their house. The only thing he saved was his pet bird, Abboud, which he has had for more than five years. “I’d rather die than lose this bird,” he says. Kasim is unhappy living in the camp, because it’s hot and dusty, but believes the bird has it worse, especially now that he’s no longer able to find proper seeds to feed it. “I have six sons, and I love this bird just like one of my sons,” he says with a playful smile on his lips. “If you asked me to sell one of my boys, maybe there would be a chance — but not my bird.”

Omar and his pregnant wife, Aizhar, left their home in Mosul on March 22. They walked for four hours in the dark before reaching the safety of Iraqi forces-controlled territory. Omar says they were shot at by Islamic State fighters and remembers watching at least two other families get hit when they fled. But staying put wasn’t an option: Aizhar was about to give birth, and there weren’t doctors to deliver the baby in Islamic State-held territory. The only item he was able to take was a ring that his mother had given him. “My mother died, and I keep this as a memory,” he says. Omar couldn’t wear the ring in public under the Islamic State, but now he wears it proudly on his right hand. Aizhar salvaged something else: clothing for the baby they were expecting. Pulling a bundle from a bag, Omar lays out a small collection of infant clothes on the floor of their tent, next to his 3-month-old son. “We’ll always save these for him,” Omar says. “They were gifts from our relatives before he was born.” 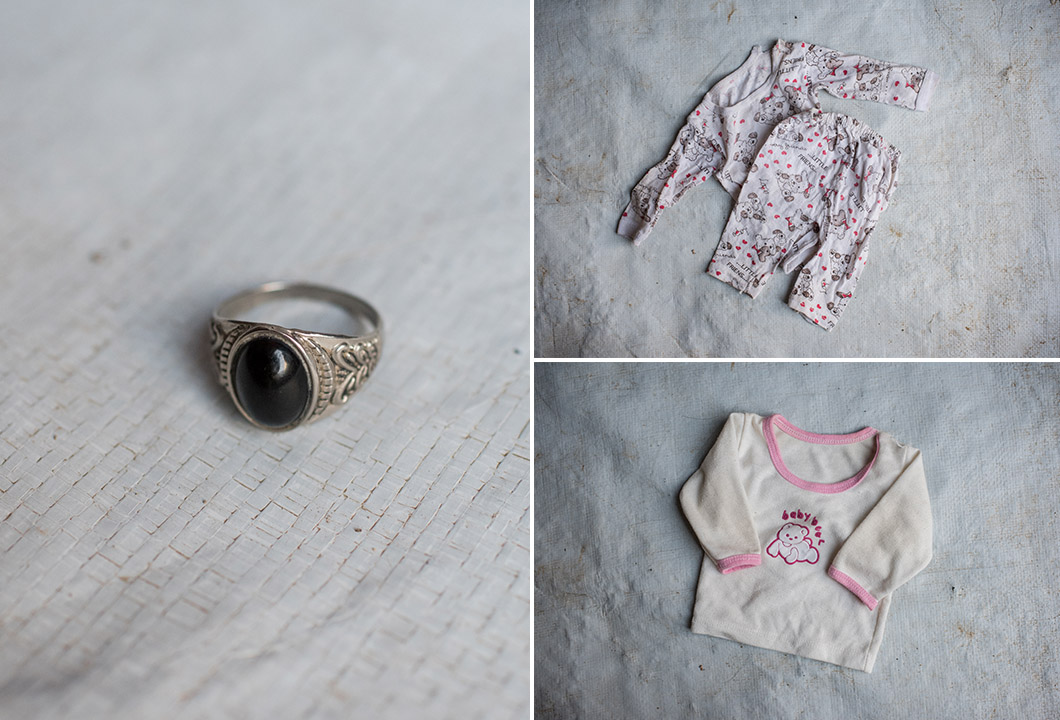 In a one-room tent, Israh is raising her four sons and daughter by herself. When the family fled the fighting in Mosul in October 2016, the only thing she took was her Quran. “I didn’t want to live without reading and without my religion,” Israh says. She has been reading the Quran since she was 14 years old and keeps the one she saved wrapped in a blue plastic bag in the tent. Israh talked about the difficult conditions at the camp — the stifling heat and, she says, “There’s no life.” Divorced from her husband years before the rise of the caliphate, she has taken care of their five children on her own ever since, though it has been hard for her. “These kids are innocent,” she says. “What is their fault?”

Ammar fled Mosul on July 3. A day earlier, he was trying to find food for his family with his friend when they were shot at by a sniper. The friend was hit, so Ammar carried him on his back and took shelter in a building. But shortly after the building was hit by an airstrike. His friend died, and Ammar remained stuck under the rubble for more than 24 hours before being rescued. The only thing he brought with him was a watch his wife gave him before they were married. “It’s a memory,” he says. “I brought it because of her.” He keeps the watch in his tent but doesn’t wear it because it’s broken. When Ammar remarks on the weight he lost during the siege of Mosul, he smiles. At least here he can be outside and play games in peace. “I’m happy to be able to live again.”

Wisam, above left, fled western Mosul after Iraqi forces reached his neighborhood on March 6 and forced out the Islamic State fighters controlling it. “These photos were all I could take quickly. All my other things were left behind,” he says. One photo shows Wisam sitting on the ground, with an arm around the shoulders of his brother Inmar, who is also living in the camp. In another photo, Wisam and his male relatives stand together in a field in a small village on the outskirts of Mosul. The image was taken on a cell phone and printed in secret by a friend during Islamic State rule. “The Islamic State would punish us with lashes for having this picture,” he says, making a whipping motion with his hand. 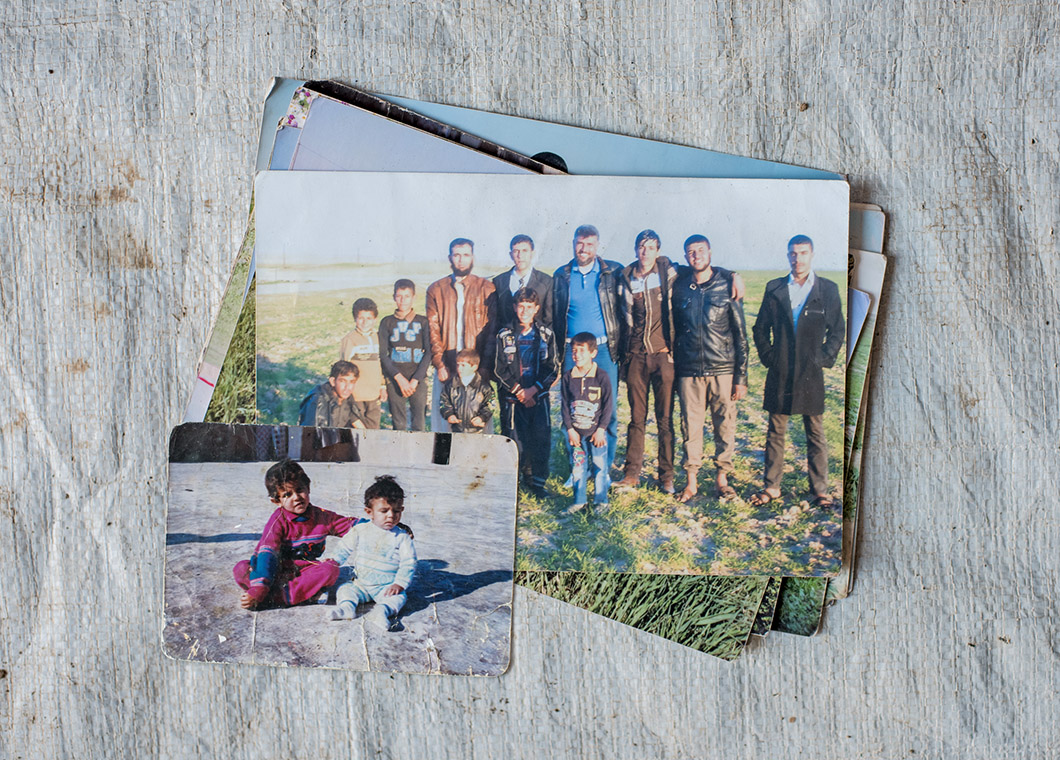 In November 2016, Khatab left Mosul with his mother, father, and younger brother. The only thing he brought with him was a cell phone he had kept hidden from the Islamic State fighters who ruled over his Mosul neighborhood for three years. “If the Islamic State found out we had a SIM card or a mobile phone, we would have been executed for sure,” he says, sitting in the family’s tent at Khazer camp on the outskirts of Mosul. The family had broken the phone’s SIM card out of fear of punishment by Islamic State fighters and kept the phone stashed away under Khatab’s mattress in his room. “We brought the phone [with us] to call our relatives — to find out who is dead or alive and [if alive] where they are going.” 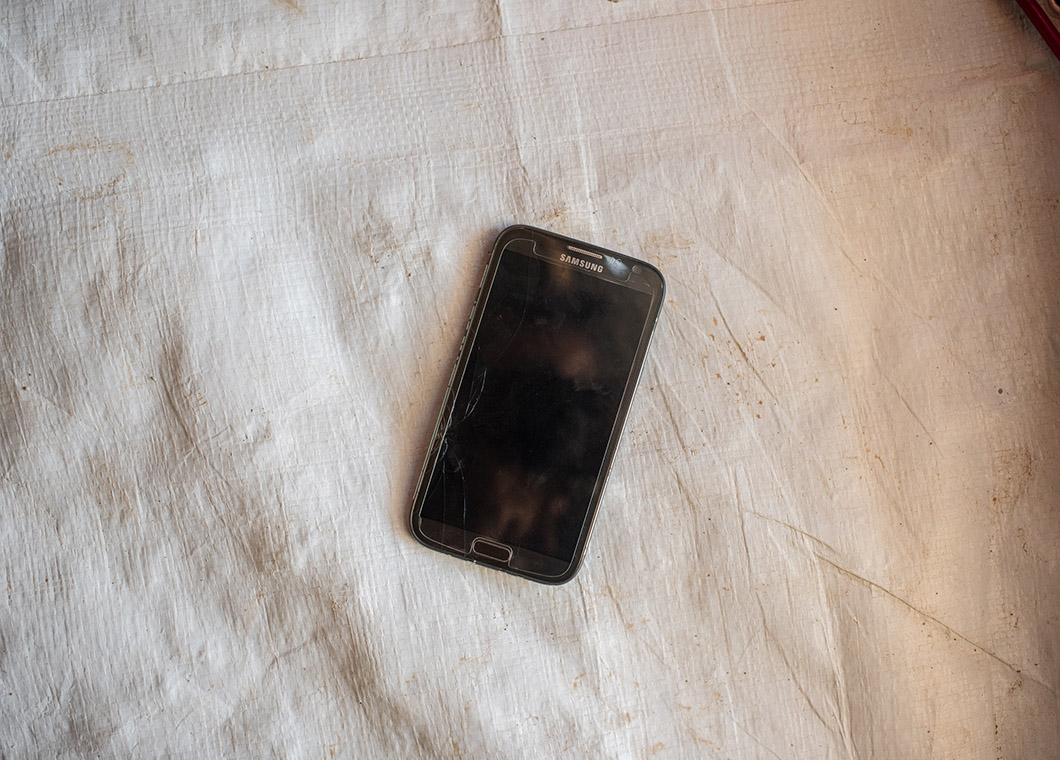 A version of this article originally appeared in the September/October 2017 issue of  FP magazine.