Hamid Karzai Has Nothing Good To Say About America

The former Afghan president sees only more killing in Trump's plan for his country.

KABUL — Hamid Karzai still hasn’t forgiven the nation that put him in power. “When the U.S. brings more planes, who are they going to bomb? Our villages and our homes,” he told Foreign Policy in his first interview since the Trump administration announced its new strategy for Afghanistan, a hint of anger breaking through his usually diplomatic demeanor.

It has been three years since the former Afghan president, once a close ally of the United States who depended on American backing, left his old role. He is adamant that he has no interest in returning to the presidency. But Karzai is far from retired.

We met at his Kabul residence, a heavily secured private house, and in keeping with the Afghan traditions of hospitality, the former president greeted us humbly at the door. The home is a stone’s throw away from the presidential palace, a building he held control over for the better part of this century. He led us to his library, which displayed an endearingly motley taste in literature, including Shakespeare and the Constitution of India.

At 59, Karzai has no public office, but in a country where relationships, from family to clan, are the driving force of politics, he is still entangled in affairs of state. He continues to consult with a number of power players, both within and outside the government. In an average week, he says he meets over 400 people, and up to 6,000 on the national holidays when he hosts tribal elders, political leaders, and activists all over the country. “Busy, busy, busy!” he says, “The Americans are keeping us busy.”

The same was true, of course, when Karzai was in office and custodian of Afghanistan’s alliance with Washington. But his assessment of the United States — and the present Afghan government that is cooperating with it — has taken a decided turn for the worse. 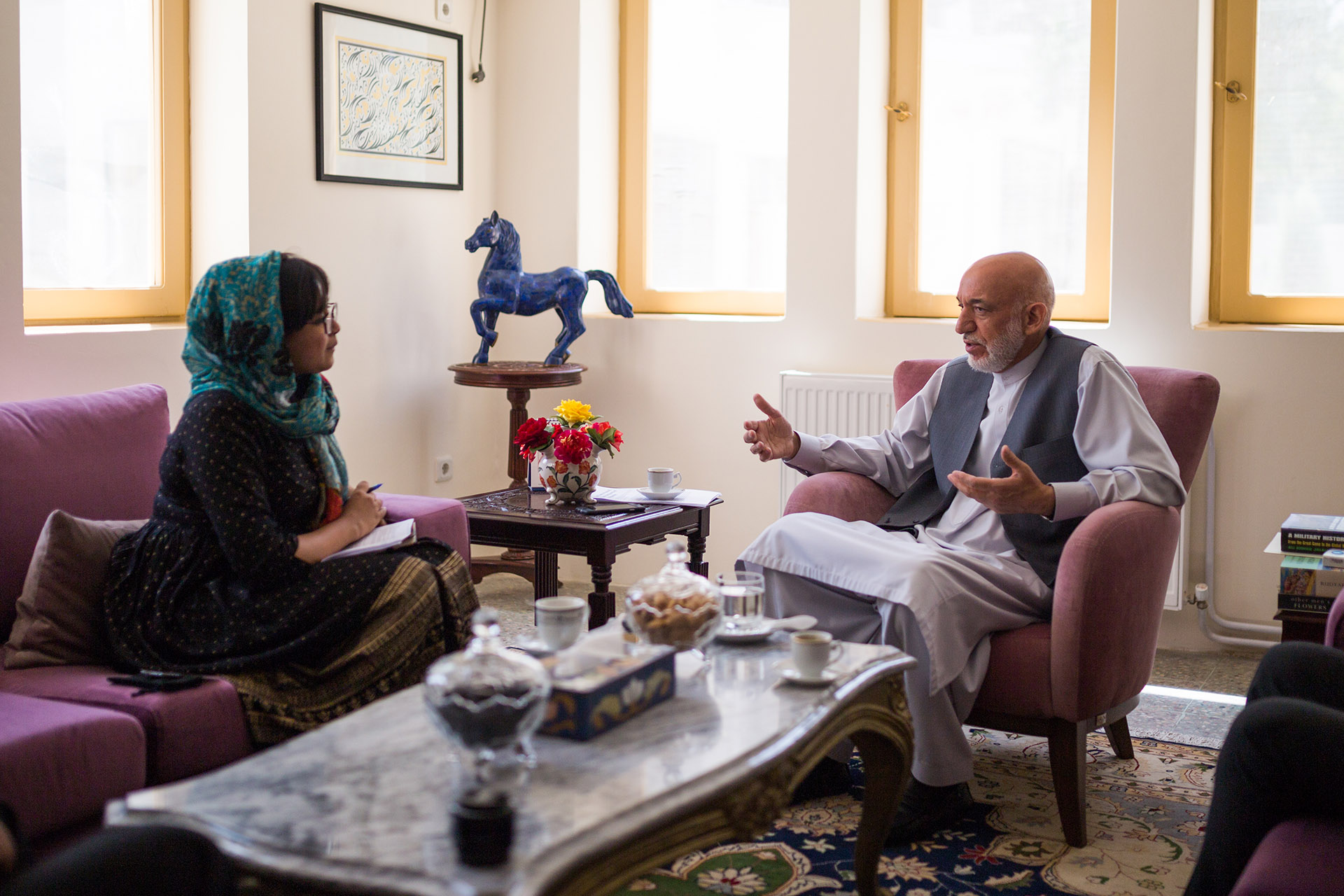 That’s a sharp contrast with the view of many Afghans, including soldiers, who have welcomed Trump’s public calling out of Pakistan for its support of Afghan insurgents. For Afghan soldiers who have been bearing the vast brunt of the fighting against the Taliban and the Islamic State in the country, Trump’s announcement was welcome news. “It’s not like I want to fight this war; no Afghan does but, at this point, we don’t see any other way out,” Ahmad (a pseudonym), a 35-year-old soldier with the Afghan National Army based in the battle-worn province of Kunduz, said wearily over the phone in an interview with FP. “We [the Afghan forces] still need the U.S. support in combat. This is a complicated war, and we are still not very capable to fight our enemy.”

The “enemy” to Ahmad and his compatriots is not only the growing Taliban insurgency but also their backers in the Pakistani government. It wasn’t just the announcement of a bolstered U.S. military presence that enthused them in Trump’s announcement, but the chastisement of Islamabad as well.

But Karzai doesn’t trust Washington’s intentions. He says he told the Americans for years what Pakistan was doing. “They not only ignored me, they named Pakistan as a major ally. By naming Pakistan now, all they’re doing is finding a renewed justification for continuing the conflict, at the cost of Afghan lives and Afghan property and Afghan land,” he says. “It doesn’t take a country 15 years to decide whether someone [Pakistan] is lying to them or not; 15 years is a long time. They can’t come to us after 15 years and say Pakistan is exporting terrorism.

“They have blamed Pakistan in the past as well for nurturing sanctuaries — Obama did, Hillary Clinton did, their defense secretaries did. They blamed Pakistan but kept bombing Afghanistan,” he adds in an exasperated tone. “The U.S. Vice President Joe Biden told me that Pakistan was 50 times more important to the United States than Afghanistan. You go ask him why that is!”

To Karzai, Trump’s approach is not very different than that of his predecessor. “This is an unending war where we die. We Afghans are being used as cannon fodder, as ammunition,” he says, accusing the United States of wanting only perpetual war in Afghanistan. “Even when we were fighting the Soviets, the Americans did not want the war to end or, for that matter, the Soviet Union to withdraw,” he says, adding that United States has pursued its own agenda through decades of constant conflict in Afghanistan. “They would say that they want to fight the Soviet Union to the last Afghan. They want to pursue their interests at the cost of every last Afghan. 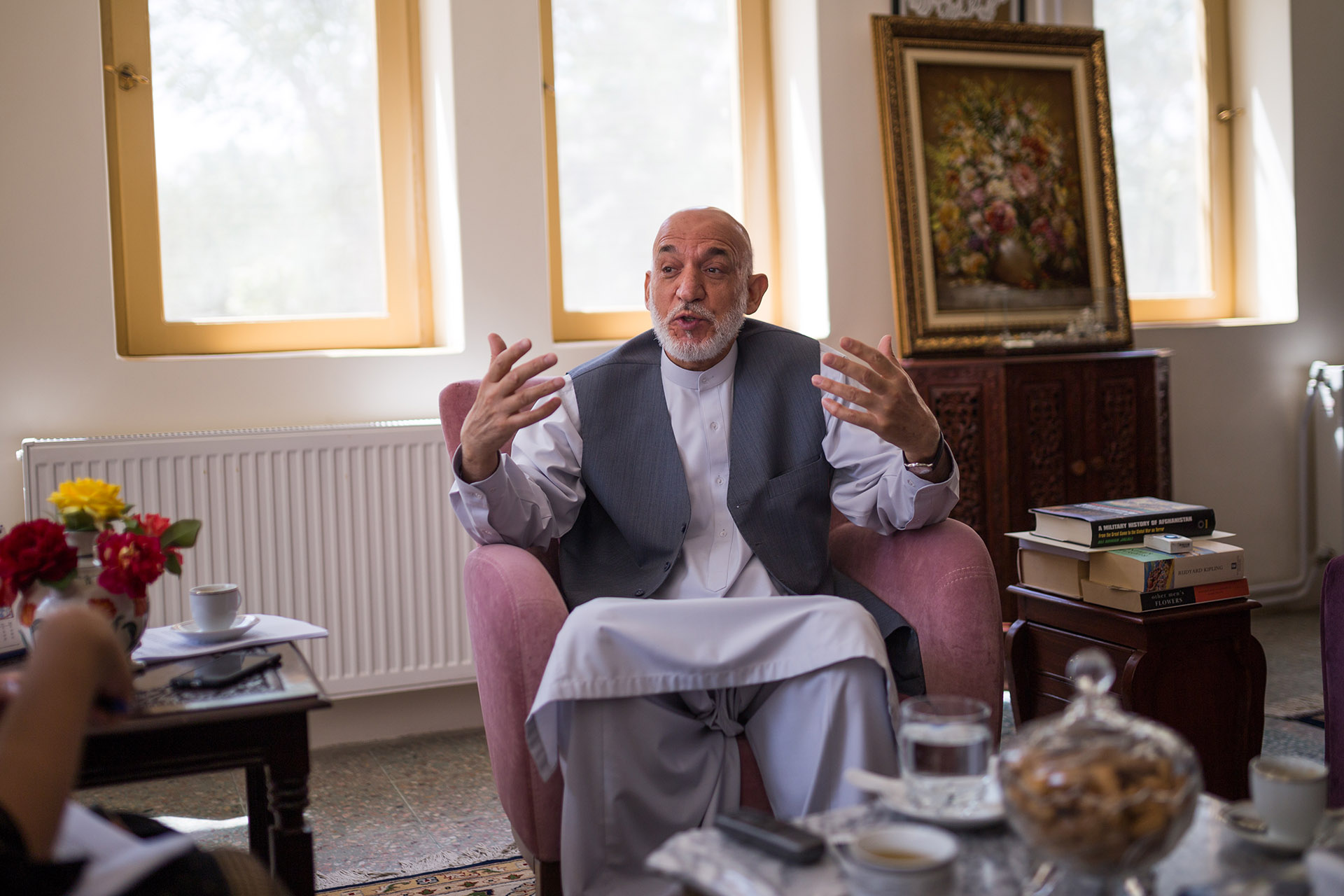 “We don’t want to become the battleground for the U.S.’s objectives in this region, but that is what it is going towards,” Karzai warns.

Though he still has loyal allies in Afghanistan, Karzai mostly finds himself isolated in this assessment. Most Afghans are pleased by Trump’s rescinding of plans he inherited to complete the withdrawal of U.S. troops from the country. Since the beginning of that process in 2014, the conflict with the Taliban has increased steadily, and newly formed groups like the Islamic State in Afghanistan have added to the security challenges and civilian casualties. According to the United Nations Assistance Mission in Afghanistan, about 11,418 casualties from war were reported in 2016, while the first half of 2017 has already seen 5,243 casualties.

Karzai grudgingly admits that the insurgency has grown, but he denies that the withdrawal of U.S. troops is any less of a threat than their continued presence. “When the U.S. brings more planes, who are they going to bomb? More U.S. involvement simply means more casualties,” he says, his voice rising. It’s true that civilian deaths have previously been correlated with heightened U.S. military activity. And in the three weeks since Trump’s announcement of the Afghanistan plan, there have been close to 29 civilian deaths in separate airstrikes across three provinces of Herat, Logar, and Kabul.

Ultimately, to Karzai, the Taliban is less of an obstacle to peace than the Americans. “If I was president I would end the war! I would end it,” Karzai announces. His solution for Afghanistan’s future is a joint effort “by Russia, by China, by others.” Instead, he says, rivalries are building in the region — and it’s all the fault of the United States. “Pakistan has not been isolated. U.S. may have cut some funding, but Russia is with them now, China is with them,” he says. “The U.S. did not try to isolate Pakistan — instead, they’ve tried to create conflict here [in this region].”

“There is a difference between isolating someone and adding to the conflict,” he says, referring to Trump’s call for India to get involved in Afghanistan. And he dismisses out of hand calls for private contractors to take a bigger role. “More corruption, more killing! These are merchants of death. America will bring people here who have made killing their business.”

When asked what he sees as solution to the problem of a growing Taliban insurgency, Karzai, who has been criticized for his soft approach toward terrorism during his time in office, called for the Afghan government to pursue its own independent peace negotiation. “Currently both sides [the Taliban and the Afghan government] are serving foreign interests. The moment that is gone and Afghans are allowed to sit among themselves, we will have peace,” he claims, adding that in the end the Taliban are after all “from this country too and belong to Afghanistan. They are Afghans. They’re most welcome — they belong to this country.”

Brushing aside arguments that the Taliban pose a threat to Afghan democracy, Karzai says that the fundamental problem with the group has always been its relationship to Pakistan. “I left because I opposed the Pakistani rule in Afghanistan. They were ruling our country under the garb of Taliban,” he explained, adding that while he has faced deep personal losses caused by the group, such as the assassination of his brother, cousin, and many friends, he is willing to put them aside for the sake of the national interest.

“The biggest threat to Afghanistan is the U.S. and Pakistan combined,” he says, “I don’t see them separately. I’ve dealt with both of them. They’ve been cooperating all along.… My opposition has always been to the foreign rule in Afghanistan, as it is today.”

But Karzai is ready to reaffirm Afghanistan’s reputation as the “graveyard of empires.” “Once it was the British, then the Soviet Union, then it was Pakistan…. We don’t get exhausted — they get exhausted and leave,” he says. “Now the Americans must decide whether they want to eventually get exhausted and leave or respect our sovereignty and the life of the Afghan people and allow the country to have peace.

Ruchi Kumar is a journalist in Afghanistan.

Turkey Is the Biggest Swing Player in the Russia-Ukraine War

Ankara has used its unique position for a strategic advantage.

In Europe and the Middle East, plans for missile defense are a mixed blessing.

Exactly two years after a deadly blast, the capital was again enveloped in dust.

Is Moqtada al-Sadr Trying to Stage a Jan. 6 Insurrection in Iraq?

The cleric’s “spontaneous peaceful revolution” is more of a bid to maintain his own influence—and the political status quo.