The Islamic State has retreated to a remote tribal region. Taking it back won’t be easy.

The Islamic State has been losing ground in Syria for more than a year. United States-backed Syrian rebel forces have laid siege to the militant group’s de facto capital of Raqqa and now control most of the city; it’s expected to fall within days or weeks.

But the fight to liberate Syria from the Islamic State is far from over. A final stronghold remains in the east — the vast tribal region of Deir Ezzor, a remote swath of territory near the border with Iraq.

If a two-pronged assault — from Syrian government forces and the U.S.-backed Syrian Democratic Forces (SDF) — can root out the Islamic State from the tribal regions, that could definitively bury the caliphate.

“After the fall of Deir Ezzor, ISIS will be reduced from a state to an insurgency,” said Nicholas Heras, a fellow at the Center for a New American Security in Washington.

That’s easier said than done. Syria’s oil fields are heavily concentrated in Deir Ezzor. Yet for years the local population was shut out of the profits from the black gold siphoned from underneath their feet, a source of resentment against the Syrian government under Bashar al-Assad.

Since the Islamic State took control of the region in 2014, it has worked to integrate local society into its system of governance, co-opting tribal leadership, providing social services, and steadily rooting out opposition. The group has also recruited hundreds of largely teenaged men from the population to serve as fighters, tying local families into the fabric of control and governance. Though support for the Islamic State is by no means universal in Deir Ezzor — it has faced armed opposition — it is heavily entrenched there.

The maps below show Deir Ezzor, its oil fields, and the complex web of tribal federations along the Euphrates River, which bifurcates the region. The maps, used with permission, are the result of a yearlong joint project among the Center for a New American Security, the nonprofit People Demand Change, and a network of researchers based in and around Deir Ezzor, which is also sometimes transliterated as Deir Azzour. 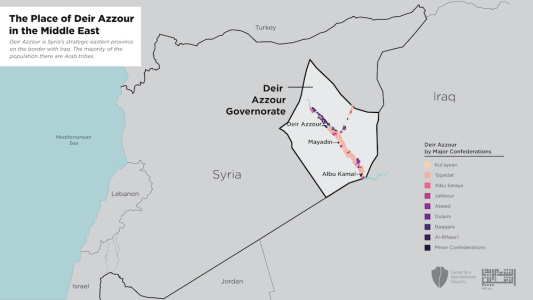 As the Islamic State lost ground in Iraq and Syria beginning in 2016, and especially after the fall of Mosul and the siege of Raqqa, it moved much of its command and control apparatus to Deir Ezzor, Heras told Foreign Policy: “Deir Ezzor is the most remote Syrian province, and there are important cross-border ties between the local population in Deir Ezzor and the population in western Iraq.” 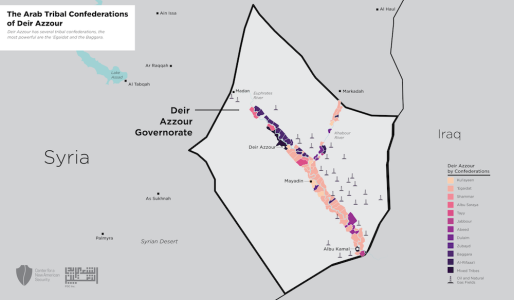 Two forces are currently marching on Deir Ezzor — the Syrian government military augmented by Russian troops, Iranian military advisors, Shiite militias, and the U.S.-backed SDF, which includes Kurds and Arabs. Whether or not two groups can work together to vanquish the Islamic State from Deir Ezzor is unclear. Heras said that the Russians have waged a successful information campaign in the region to convince the local population that the United States, via the SDF, intends to seize land and natural resources rather than simply defeat the Islamic State.

The U.S. military has tried to push back on that notion. “We as a coalition are not in the land-grab business,” Army Col. Ryan Dillon, a coalition spokesman, told reporters in June. “We are in the killing-ISIS business.”

But that’s not a clear strategy, and it may not be enough to convince the tribes of Deir Ezzor that the United States, through its proxies, isn’t looking to benefit from a future offensive.

“The Trump administration is going to need to define what its Syria strategy is,” Heras said.

Otherwise, it will be easy for Assad’s forces to define that strategy for themselves.

The Coronavirus Is Hastening Modi’s Transformation of India

The Tip of the American Military Spear Is Being Blunted

When It Comes to America’s Race Issues, Russia Is a Bogeyman

Annexation Will Probably Go Smoothly. The Problems Will Come Later.