A study shows that World Bank aid is vulnerable to geopolitical influence.

The World Bank is supposed to distribute loans based on the needs of developing countries. But a recent study has found that countries with seats on the United Nations Security Council receive a disproportionate amount of loans, indicating the World Bank can be a tool for donor countries, particularly the United States, to wield geopolitical influence.

Traditional World Bank loans typically take two to three years to disburse. But after 2007, in response to criticism of its bureaucratic snail’s pace and as the world faced a food and energy crisis, the bank implemented a change that dramatically increased the amount and frequency of supplemental loans. These loans can now be approved in as little as 100 days. Since then, supplemental loans have accounted for up to 30 percent of all World Bank loans, up from as low as 1 or 2 percent in earlier decades.

That makes these loans potential tools of influence on U.N. Security Council non-permanent member countries, which are elected for two-year terms. That’s too short a period for a traditional loan to be disbursed but plenty of time for supplemental loans to come through, potentially allowing World Bank donor countries to wield loans as geopolitical carrots (or sticks).

And indeed, Christopher Kilby and Erasmus Kersting, both professors at Villanova University in Pennsylvania who study international aid and organizations, found evidence of such correlation in a 2016 paper and subsequent research. They analyzed World Bank loan data and found a clear correlation between U.N. Security Council membership and the disbursement of these supplemental loans. In fact, Kilby and Kersting’s analysis of 2015 data revealed that a full 10 percent of all supplemental lending was related to Security Council membership. 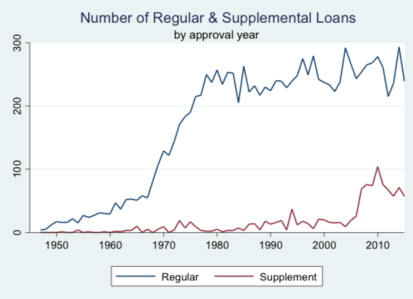 Numerous other countries display the same pattern. Jordan has also sat on the Security Council for 8.5 percent of its total time in the U.N., but it received 60.2 percent of its supplemental loans during this period. For Uruguay, the numbers are 5.6 percent and 58.1 percent; for Rwanda, 5.6 percent and 41 percent. Other countries that show a similar correlation include Brazil, Senegal, Bolivia, Nigeria, Vietnam, Turkey, Azerbaijan, and Togo.

“By charter, the World Bank is supposed to be apolitical,” said Kilby in an interview with Foreign Policy.

It’s difficult to know exactly what factors in each case influenced the disbursement of these loans, explained Kilby, which is why they have taken a statistical approach to look for correlation in the data. “The paper trail is quite hard to follow,” he said.

Correlation between Security Council membership and World Bank supplemental loan disbursement also may not be an explicit quid pro quo. Countries that sit on the council may generally be viewed as more important, be mentioned more frequently, or have a louder megaphone with which to advertise their needs and, as a result, are more likely to receive loans.

But there are documented cases of the United States exerting pressure on other international lending organizations to withhold funds for political reasons. In the late 1990s, the Inter-American Development Bank approved Haiti for several loan packages. But after the Haitian legislature ratified the packages in 2000, in the wake of a controversial election in which the United States had a stake, the funds were never released.

In a 2001 letter from to the bank’s president, later made public, U.S. representative to the Inter-American Development Bank Lawrence Harrington wrote, “We do not believe that these loans can or should be treated in a routine manner and strongly urge you to not authorize any disbursements at this time.”

As noted in The Nation at the time, interference in loan disbursement by a bank member country is a violation of the bank’s charter.

Such evidence of a smoking gun is rare. At the very least, Kilby’s and Kersting’s research provides further evidence that U.N. Security Council membership, for one reason or another, comes with perks.

“It is clear that when countries get on the Security Council, they expect there will be a bunch of benefits that come with it,” said Kilby.