Russia Is the Biggest Recipient of Chinese Foreign Aid

Between 2000 and 2014, Beijing provided Moscow with a total of $36.6 billion in loans, grants, and other agreements, according to a years-long study published today by the College of William and Mary’s AidData research lab. The next-highest recipient of Chinese foreign aid during that period was Pakistan, at $24.3 billion, followed by Angola at $16.6 billion. (North Korea, for all the talk of China propping up the regime, got a paltry $272.65 million — officially, at least.) 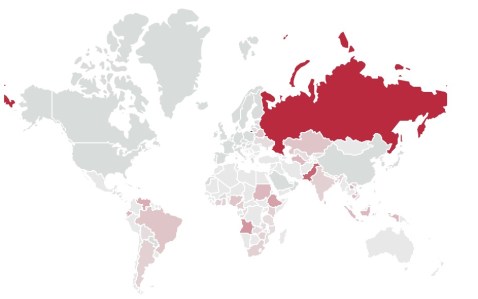 Global destinations of Chinese foreign aid from 2000 to 2014. Map used with permission of AidData.

Foreign aid comes in two flavors. Development assistance includes grants or loans at below market rates, while “other official flows” include loans at near market rates and that involve some commercial considerations. Chinese foreign aid to Russia is almost exclusively the latter category — and is mostly about getting the thirsty Chinese economy access to Russia’s huge reserves of oil.

“To Russia, many of those are loans for the purpose of exporting oil to China,” explained Brad Parks, the chief researcher on the project. “The fact that those loans are offered on close to commercial terms and geared towards increasing oil exports to China is very consistent.”

While Russia gobbled up the biggest chunk of Chinese aid, Beijing spread money far and wide. AidData’s research traces Chinese aid to 140 countries and territories between 2000 and 2014. Total Chinese foreign aid during that period of $354.3 billion was not far behind the U.S. total of $394.6 billion, though the types of projects the aid funded were on the whole vastly different.

The database also revealed 20 projects totaling $272.65 million in aid that China provided to North Korea between 2000 and 2014. Some of the transfers involved small quantities of grain and subsistence materials. Others were more substantial.

In 2000, China provided satellite telecommunications equipment, computers, and meteorological equipment to North Korea. When then-Vice President Xi Jinping visited Pyongyang in June 2008, China pledged 5,000 tons of jet fuel and a $14.6 million cash gift. $31.7 million was provided for a glass factory in 2005, and an unspecified amount of aid to build the Juan River-Wonjong Bridge Highway in 2014, with construction completed in October 2016.

But these projects almost certainly represent a small fraction of total Chinese aid to its northeastern neighbor. “We have reason to believe that this is a substantial underestimate of total Chinese official financing to North Korea,” the researchers note. “Based on research, China has given large scale food and fuel aid to North Korea that largely exceeds the captured projects.”

Unlike the United States, China does not publish its foreign aid data and views it as politically sensitive, even a state secret. That’s especially true in the case of North Korea.

“The Chinese have become increasingly sensitive about their relationship with North Korea,” now that Pyongyang is developing nuclear weapons and long-range missiles, said Evans J.R. Revere, a nonresident senior fellow at Brookings.

The secrecy demonstrates “a desire not to reveal to the international community just how beholden North Korea is to China and therefore how responsible China is for the continued existence of North Korea,” Revere said.

North Korea aside, the Chinese public likely would look askance at so much aid leaving the country — mirroring wild misperceptions in the United States that the government spends a disproportionate amount of the federal budget on foreign aid.

“There is a view in China among the general public that there is so much poverty in China that they should be keeping it at home,” explained Bonnie Glaser, director of the China Power Project at the Center for Strategic and International Studies.

NEW FOR SUBSCRIBERS: Want to read more on this topic or region? Click + to receive email alerts when new stories are published on China, Russia