Vladimir Putin is fond of claiming that demographics are destiny – which may be why he’s so angry about his country’s financial straitjacket.

President Vladimir Putin openly admits that economic sanctions “are severely harming Russia.” Imposed largely in response to the Kremlin’s illegal annexation of Crimea in 2014, Western sanctions have since become a primary thrust of Russia’s foreign policy, perhaps even motivating the Kremlin’s meddling in the 2016 U.S. presidential election on behalf of an actively pro-Russia candidate, Donald Trump. Putin has good reason to want them lifted: the sanctions, according to some reports, have “sucked the momentum out of the Russian economy.”

But have they sucked the very life out of Russia, too? There’s reason to think Western sanctions may have pushed Russia off a demographic cliff.

President Vladimir Putin openly admits that economic sanctions “are severely harming Russia.” Imposed largely in response to the Kremlin’s illegal annexation of Crimea in 2014, Western sanctions have since become a primary thrust of Russia’s foreign policy, perhaps even motivating the Kremlin’s meddling in the 2016 U.S. presidential election on behalf of an actively pro-Russia candidate, Donald Trump. Putin has good reason to want them lifted: the sanctions, according to some reports, have “sucked the momentum out of the Russian economy.”

But have they sucked the very life out of Russia, too? There’s reason to think Western sanctions may have pushed Russia off a demographic cliff.

Something unusual is going on in Russia these days: Russians are having far fewer children in 2017 than they did just last year. Consider the following graphic, based upon population data from Goskomstat, Russia’s Federal State Statistics Service. It shows the number of children born every month as a percentage of how many were born during the same month in the previous year. Despite month-to-month variation, over the past year a clear downward trend has emerged. For 11 of the past 12 months, Russia has recorded significant decreases in the number of children being born compared to in the previous year. For most of 2017, it’s been between 10 and 15 percent fewer births. What’s going on here? 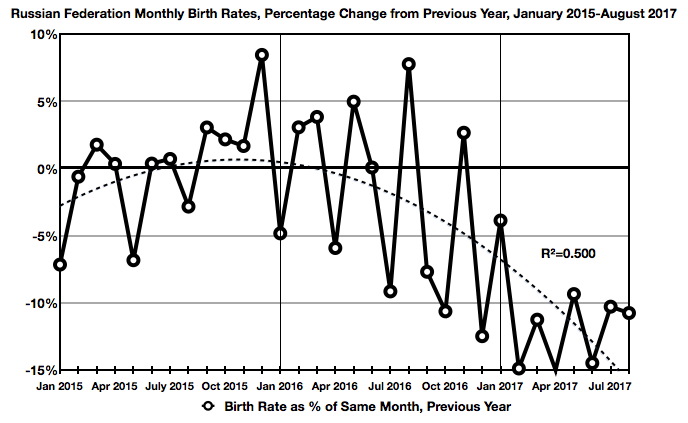 Certainly, with a total population of some 146 million people, missing 157,000 is hardly noticeable, and to suggest that Russia is in some sort of demographic death spiral would be disingenuous. While still lagging far behind their European neighbors, Russians today are healthier and living longer than at any point in their history, and those positive trends show no signs of changing. That’s good news.

But especially in light of these gradual improvements, we still need to explain why Russians are suddenly having fewer kids. And the most plausible hypothesis blames Western economic sanctions. The causation is straightforward: Economic sanctions have hobbled Russia’s economy, the resulting poverty and economic uncertainty have led fewer Russians to have children.

There is ample supporting evidence: The twin shocks of U.S. and EU sanctions in 2014 and the drop in the global price of oil — Russia’s chief commodity export — produced in Russia in 2015 an economic contraction of -3.7 percent of GDP, increased capital flight and budget deficits, and a free-falling ruble that depreciated by more than 50 percent against the dollar. More worryingly were a spike in unemployment and a sudden jump in the number of Russians living in poverty — from 15.5 million in 2013 to 19.8 million in 2016. Even Putin’s former Finance Minster Alexei Kudrin forecasts continued economic malaise under international sanctions. Logically, under such economic gloom, Russian families would be reluctant to have additional children.

The alternative explanation is that these are simply long-term demographic trends. Putin’s Russia has been on the precipice of a demographic cliff for some time, through little fault of the current regime. When communism collapsed 25 years ago, it took not only the Soviet Union down with it, but also unleashed an unprecedented demographic catastrophe. During the decade-long economic depression of the 1990s under Boris Yeltsin, Russian mortality skyrocketed. Male life expectancy bottomed out at around 59 years. At the same time, fertility plummeted. Few parents chose to have children they could not provide for, leading to a “baby bust” and steep population decline for most of the 1990s. Few girls born in the 1990s means few potential mothers today, producing a natural “echo” that demographers have anticipated for years. What we are witnessing, then, is the beginning of an inevitable long-term shrinkage of the Russian population that, by 2050, will make Russia only the 15th–most–populous country, behind the Philippines and Tanzania.

It is tough to argue against this well-worn “demography is destiny” trope: Russia’s looming demographic decline is very real. But there are reasons to believe that Western sanctions accelerated Russia toward the cliff edge.

First: both Russian and international demographers and statisticians are indeed very good at what they do. Long-term population forecasts hit the mark 94 percent of the time, and when they’re wrong, it is often because of unforeseen political factors, like a disastrous war or economic depression. As with your local weather forecast, the further into the future you predict, the more likely your forecast is to be wrong. That’s what makes the following projections from Goskomstat’s most recent Demographic Yearbook of Russia, 2015 (published in 2016) so interesting. Based on total fertility rates and the size of the cohort of childbearing age, they calculate standard “high,” “medium,” and “low” forecasts of Russia’s population change. Assuming “business as usual,” in 2016 these demographic experts estimated a population increase between 108,300 and 492,000 for 2017, with a mid-range estimate of 311,800 more Russians. Yet, as mentioned previously, Russia is actually shaping up for a net population loss of around 157,000 in 2017. Even the most short-term, standard projections were off badly — the real number around a quarter-million below even the most pessimistic estimate — suggesting that external factors, such as prolonged economic recession, are dragging down Russia’s population. 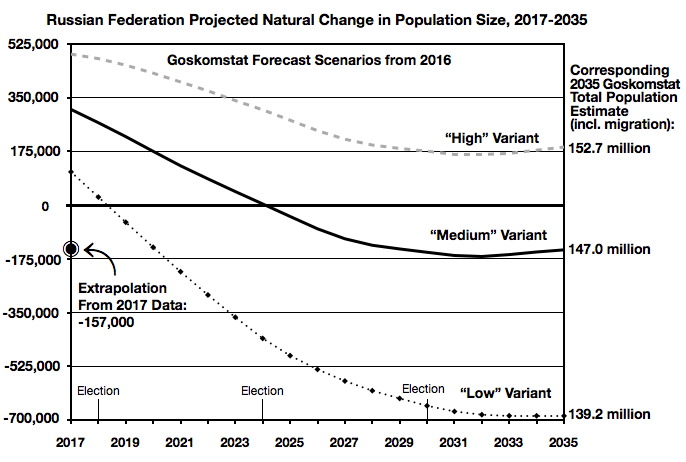 Second, in recent years, Russia has benefitted from in-migration, especially from the former Soviet republics of Central Asia. However, the number of migrants in the first half of 2017 was the lowest since 2010 and will not suffice to offset Russia’s natural population decline, further suggesting that Russia’s sanction-laden economy has lost its allure. Migration is driven by politics and economics, not demographics.

“Demography is a vital issue that will influence our country’s development for decades to come,” President Putin recently declared. And he’s right. The difference between an optimistic and a pessimistic scenario today could mean a projected difference of some 13.5 million Russians by 2035: that’s just a few election cycles away. Imagine the potential of 13.5 million more people: more taxpayers, businesspeople, innovators, artists, and conscripts. On the flipside, sustaining economic growth becomes harder and harder for those remaining in an ever-shrinking population. What we are witnessing in 2017 is the beginning of Russia’s long-term demographic drop. How far and how quickly Russia falls will make all the difference, and President Putin certainly knows it.

In 2016, a U.S. State Department official claimed: “The sanctions are designed not to push Russia over the economic cliff,” explaining that short-term pressure “would be bad for the Russian people.” So it is somewhat ironic that the long-term consequence of sanctions might be to push Russia over a demographic cliff instead.

Mark Lawrence Schrad is an associate professor of political science at Villanova University. He is the author of the forthcoming book Smashing the Liquor Machine: A Global History of Prohibition. Twitter: @VodkaPolitics

NEW FOR SUBSCRIBERS: Want to read more on this topic or region? Click + to receive email alerts when new stories are published on United States, Russia

Vladimir Putin is fond of claiming that demographics are destiny – which may be why he’s so angry about his country’s financial straitjacket.