The International Committee of the Red Cross is “first in, last out” of conflict zones. Their scaling back in Afghanistan is a bad sign.

But his team prevailed upon him to make an exception for the return of Lorena Enebral Pérez, an ebullient 38-year-old physiotherapist from Spain, whose boundless energy, good cheer, and packages of Spanish cheeses and cured meats, they hoped, would help boost sagging morale.

On Sept. 11, the day after she arrived for her second stint at the orthopedic clinic in the last year, Enebral was shot and killed by a 21-year-old patient who’d been receiving treatment at the center since he was a toddler. She became the seventh staff member of the International Committee of the Red Cross (ICRC) killed while working in Mazar-e-Sharif this year. 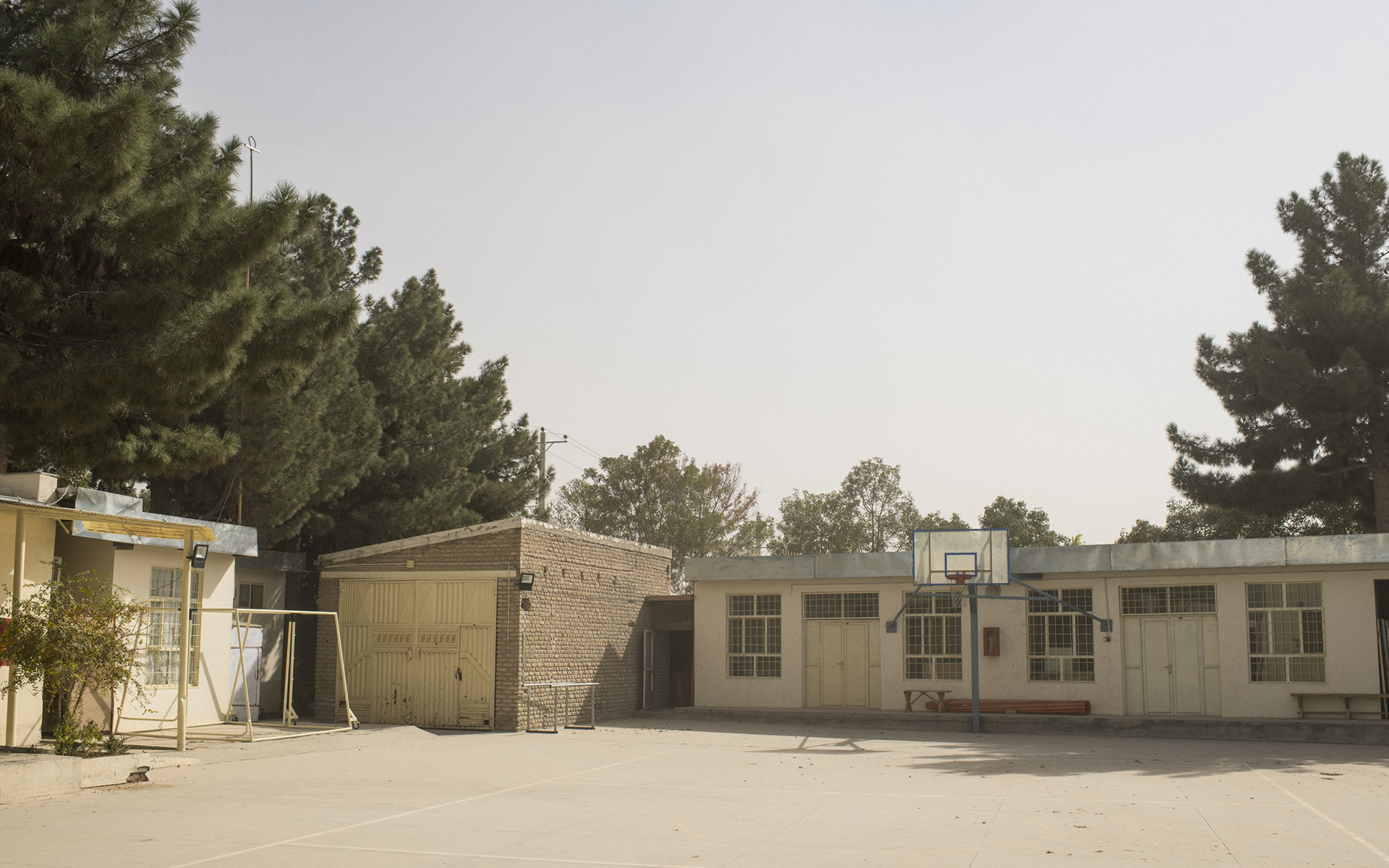 The tragedy for Enebral’s family and friends also has serious consequences for the ICRC’s operations in Afghanistan and the patients who’ve come to depend on them.

The ICRC temporarily closed the orthopedic center and is looking to hand it over to the Afghan government or another international organization. Two other offices in northern Afghanistan will be closed entirely. The number of Afghans who will no longer have access to care, an ICRC spokesman said, “can be counted in the hundreds of thousands.”

Its departure is alarming because the ICRC has an outsized reputation for braving conflict zones. “Globally, they are the first in and the last out,” said Cindy Issac, the U.N.’s recently departed senior human rights officer for Afghanistan. If ICRC presence, or lack thereof, is a barometer for conditions on the ground, northern Afghanistan’s outlook right now is bleak. 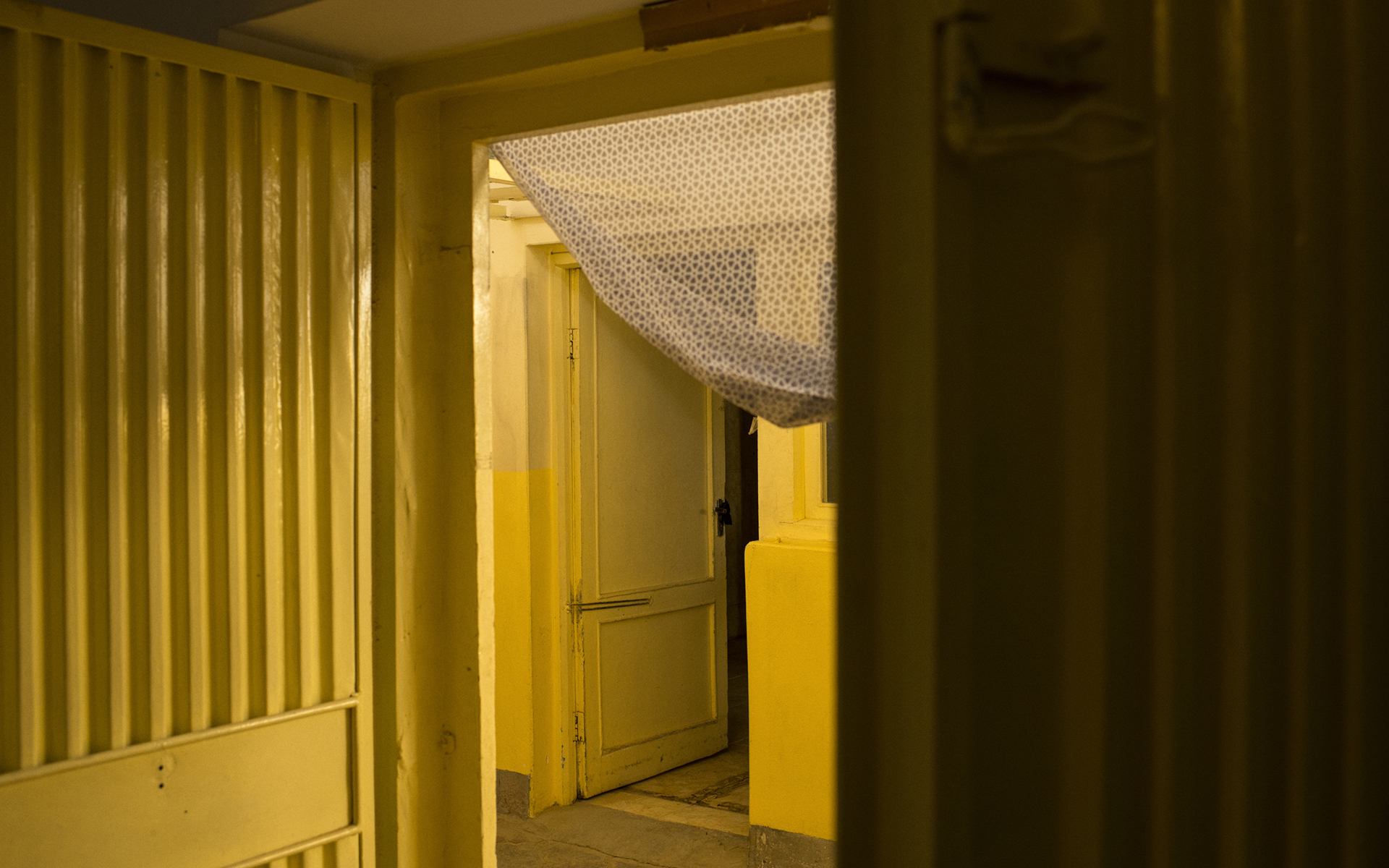 The hallway where Enebral was shot. The motive remains unclear. (Andrew Quilty/Foreign Policy)

The orthopedic center in Mazar-e-Sharif, a short walk but mandatory drive from the guesthouse where Enebral lived, has more than 26,000 registered patients and beds for 77. Since 1991, the center has treated Taliban fighters and government troops, simple villagers and those born with cerebral palsy and those who’ve contracted polio — and fitted them with and trained them to use orthopedic braces and wheelchairs.

Unlike the armed guards and high walls that most humanitarian outfits in Afghanistan rely on for security, the Red Cross depends on relationships it builds with all sides of the conflict, nurtured over 30 years, which gives the organization unparalleled access to even the most hostile territory in the country. Weapons are strictly forbidden on the premises of all Red Cross orthopedic centers — and that rule is respected. When the Taliban ruled the country from 1996 to 2001, they obeyed. Patients and staff receive just a cursory pat-down.

Enebral, on her first day back at the clinic, had stayed late to finish a mid-morning cerebral palsy session with a child patient; around the room, soft toys and giant rubber balls jostled for space with children’s leg braces and walking aids disguised as toys. She left the room and walked down the corridor and through a door separating the patient areas from workshops; the first room held a tailor who sewed Velcro straps and elastic belts for the in-house-made prostheses. That is where Nasim, a 21-year-old patient with polio who’d been coming to the clinic for treatment for 19 years, was sitting in his wheelchair.

He raised the pistol he’d concealed and fired a single bullet into Enebral’s chest from less than 6 feet away. The bullet severed a vital artery, exited through her back, and eventually lodged in the door she’d just passed through. She stumbled through the tailor’s door and collapsed on the tiled floor, unconscious in seconds.

Co-workers got her into a wheelchair and then into a Red Cross vehicle parked near the front gate and rushed her to a nearby military base run by German soldiers. She was pronounced dead soon after.

“It was very quick,” Chassot said. “There was nothing to be done.” 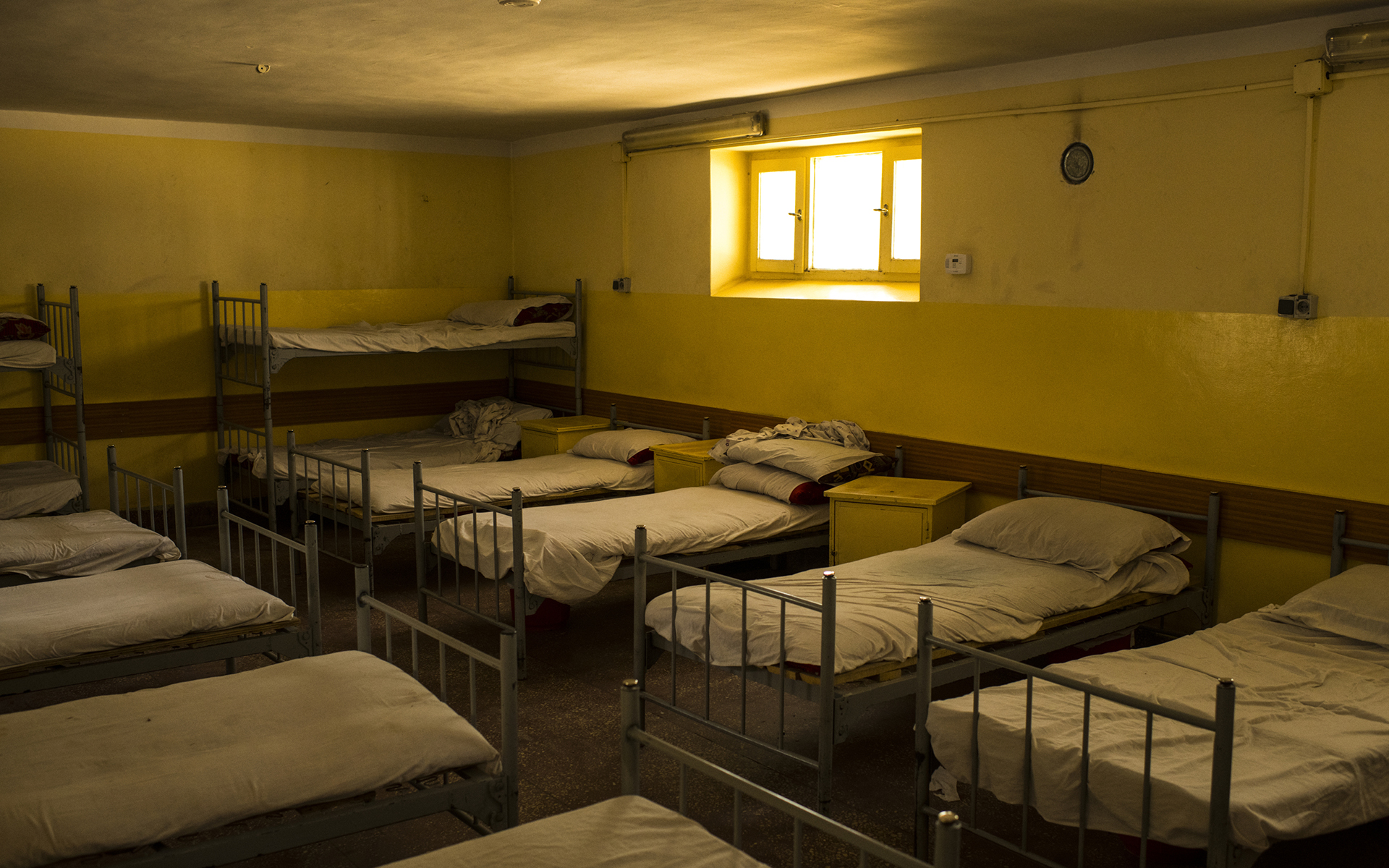 A dormitory for male amputee patients, empty since the shooting. (Andrew Quilty/Foreign Policy)

Nobody is quite sure why Nasim shot Enebral; as a specialist in cerebral palsy, she’d never treated him. And Nasim was viewed as a low-risk patient. He knew the ICRC and the facility, been coming there since he was 2, and knew he would need the treatment for the rest of his life.

The day before the shooting, he’d come in for an adjustment to his leg braces and asked staff — even though he knew the answer — for bus fare home. He was refused, per the center’s policy, which only pays bus fare for particularly poor patients who have no money to get home.

Mohammad Yasin, the physiotherapist who lifted her body off the tiled floor, believes it may have been what prompted the shooter. “One thing I can say is he’s angry [about] that,” Yasin said. The ICRC says it has found no reason to believe the fare dispute motivated the shooting.

Meanwhile, Nasim was arrested and is currently being held in a prison run by the National Directorate of Security, the Afghan intelligence agency, in Mazar. While there, in keeping with the organization’s proudest traditions, an ICRC member visited him and the alleged accomplice to ensure they had access to health care and are being treated no differently than other prisoners. 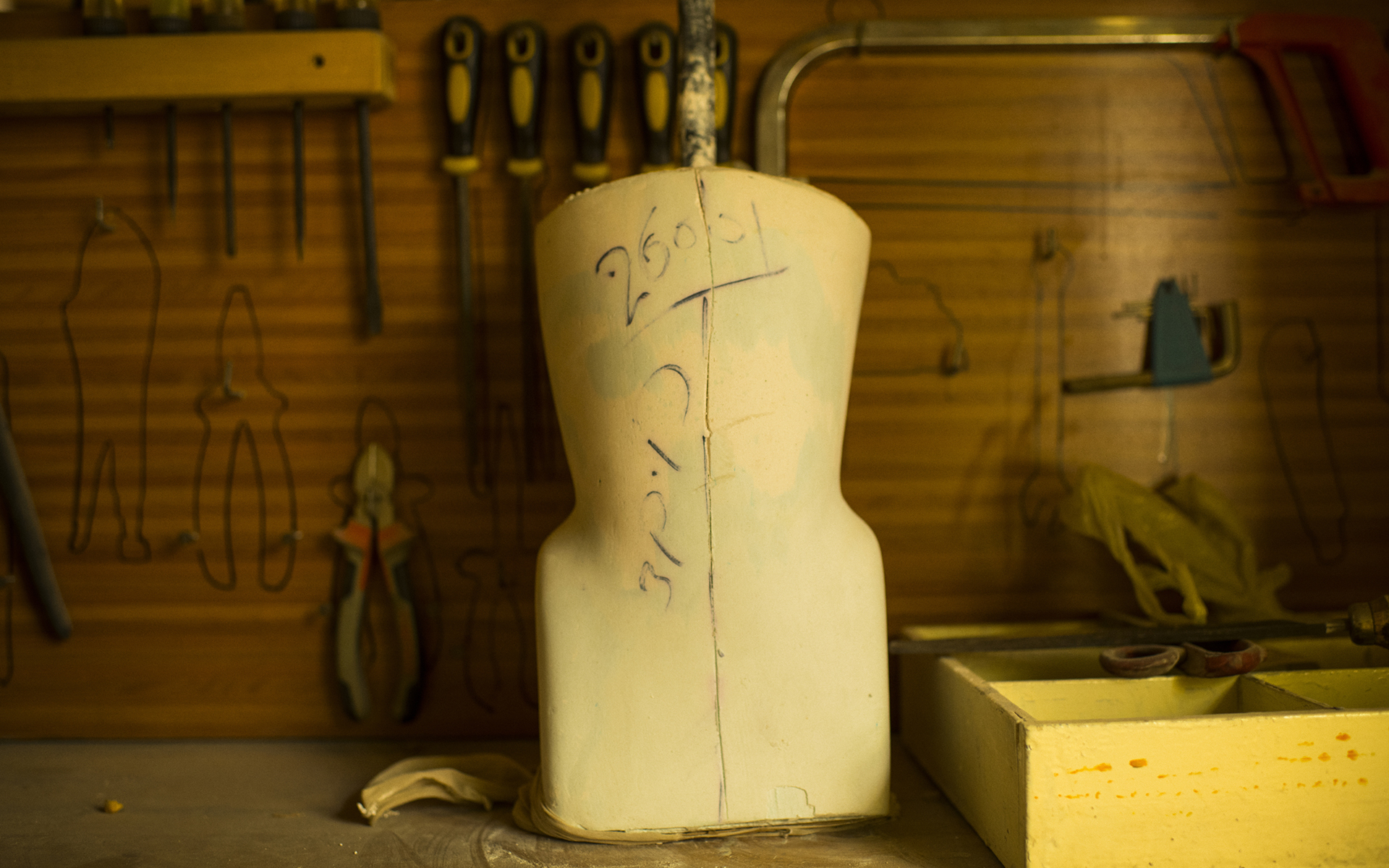 The murder left the ICRC in Mazar reeling. All patients were discharged within days, and the center has remained empty ever since. It hopes to reopen this week, six weeks after the incident, since there’s no indication that Enebral’s killing was part of a broader threat aimed at the facility.

Until then, patients will continue to arrive at locked gates after having traveled, in some cases for days, from distant provinces. “They spend their money to get here and then return crying,” said Fateh Wahedi, the orthopedic center’s director. Only workers applying blast film to the windows and building a new screening area for more thorough searches disturb the quiet. Corridors that once bustled with patients trying out new prostheses are hollow and empty; nobody is shooting hoops on the outdoor wheelchair basketball court. A dingy, beige-colored dust has collected on every surface, inside and out, underscoring the air of abandonment.

Two Red Cross offices in the north of the country — one in Kunduz province and one in Faryab — will close entirely. Hundreds of thousands of Afghans will now have to look elsewhere for treatment. The Red Cross hopes to pass the baton to the Afghan health ministry or other NGOs. But aid workers worry that the ministry is not up to the task, and the deteriorating security situation is driving many NGOs out of the country.

The most infamous attack happened in October 2015, when northern Afghanistan’s primary hospital for trauma victims, run by Médecins Sans Frontières (MSF) in Kunduz, was destroyed by a U.S. warplane (as reported by Foreign Policy). Some 42 staff and patients were killed when the hospital was mistakenly targeted during the Taliban’s temporary overthrow of the city. MSF says it won’t reopen in Kunduz until it is assured by all parties that the organization’s neutrality will be honored in the future. 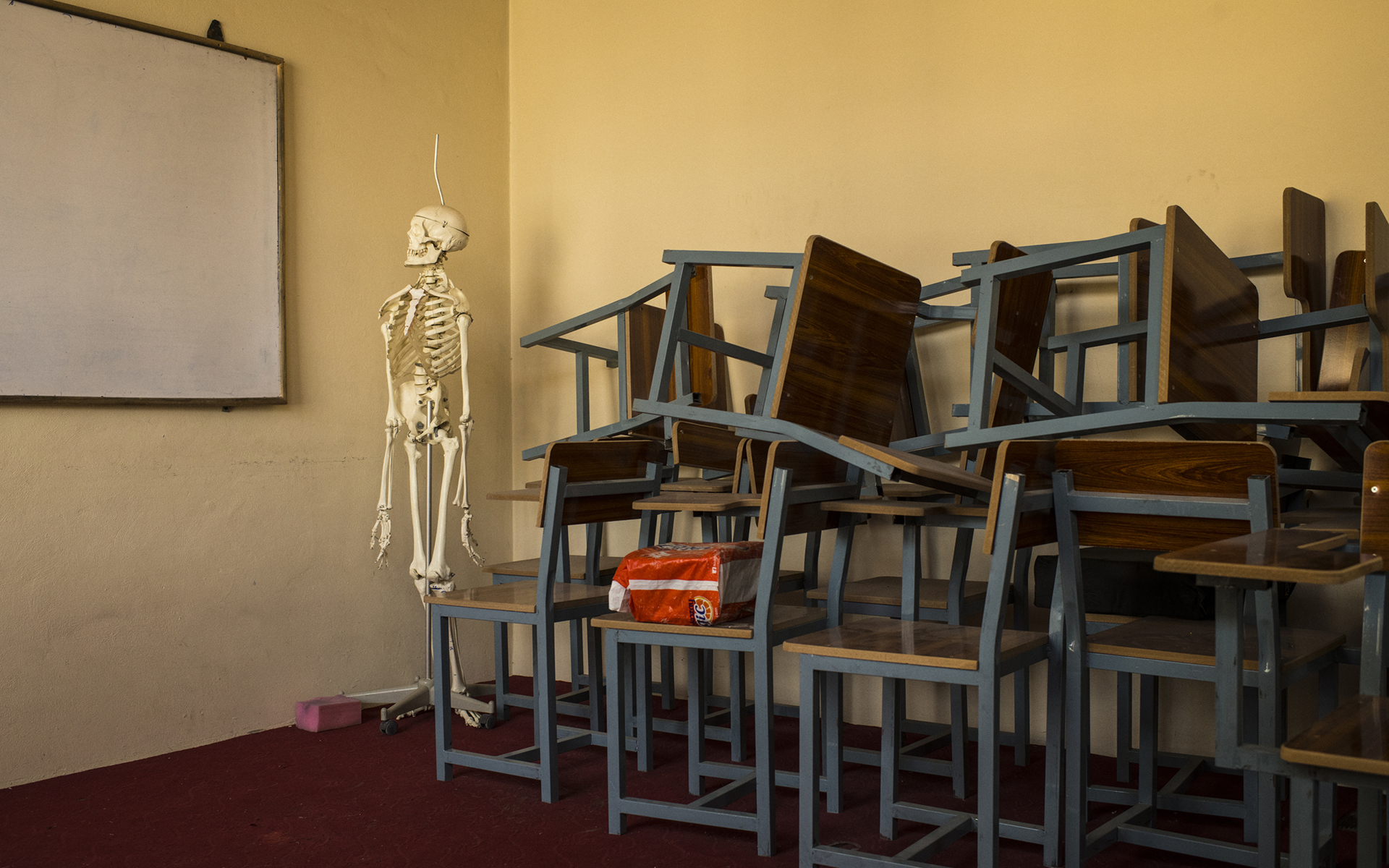 Stacked chairs and a model skeleton inside a classroom for orthopedic and physiotherapy trainees. (Andrew Quilty/Foreign Policy)

What’s especially worrisome for Afghans who depend upon the ICRC is that the more than 150-year-old organization is seen as having a higher threshold for risk than almost any other. Other NGOs watching the ICRC shutter facilities in the north are asking themselves if this is their canary-in-the-coal-mine moment.

Elisabeth Jaussaud, MSF’s country director in Afghanistan, worries about the mounting pressure and demands on health-care providers like MSF if the ICRC withdraws from or reduces its presence.

“Of course it’s something that affects us. We have great exchanges with ICRC. We are complementary in some ways,” Jaussaud said. But she’s anxious about how things will evolve. “How [will] activities carried out by the ICRC be sustained, or will they collapse completely?”

“They are a hardcore agency, and they go to difficult places,” said Dominic Parker, the head of the U.N. Office for the Coordination of Humanitarian Affairs in Afghanistan. “If they themselves are being targeted directly, it’s curtains.”

Andrew Quilty is a freelance photojournalist based in Kabul.

The United States thought Afghans would fight and Ukrainians would fold. Reality is forcing a reassessment.