Hillary Clinton doesn’t have to worry about a special prosecutor, and three other takeaways from the Attorney General’s latest Congressional testimony.

Rep. Louie Gohmert (R-Texas) famously brought a chart to Attorney General Jeff Sessions’s testimony before the House Judiciary Committee this week. After listening to the attorney general for five hours, I made one of my own; more on that below.

Reporters and casual viewers alike had been waiting with bated breath for the hearing’s promised questions about Sessions’s previous Senate testimony regarding Russiagate, as well as for clarification of the Justice Department letter sent just the night before that disclosed an ongoing evaluation of the need for a second special counsel appointment. But hearings are meandering things. You never know what Gohmert is going to show up with. And even among more traditional representatives, the subjects may vary.

So the hearing ended up covering a broader range of topics, ranging from surveillance policy, the Foreign Agents Registration Act, Alabama Republican Roy Moore’s Senate campaign, the Justice Department’s treatment of racial diversity (both within and without the department), and marijuana. But the discussion mostly circled around a few major themes: Russia and perjury, the USA Liberty Act, the potential for a second special counsel with Uranium One as a main point of discussion, and the evergreen topic of the year: loyalty. For those of you without five hours to spend watching the CSPAN video for those bits of the testimony that didn’t make immediate headlines, I’ve got you covered with four major takeaways.

Memory is a fickle thing. What was said in this hearing didn’t provide any more substantial evidence to fuel a perjury charge against Sessions — though the facts he had to admit were certainly embarrassing for him.

In the months since Sessions’s previous appearances before Congress, information has surfaced suggesting that he had been aware of the Donald Trump campaign’s alleged connections with Russia, namely George Papadopoulos’s and Carter Page’s interactions with Russian cutouts and officials. In the case of Papadopoulos, his plea describes a meeting in which Sessions was not only present but in which he also personally discouraged a plan to connect Vladimir Putin with members of the Trump campaign. In sworn testimony earlier this year, Sessions denied having knowledge of anyone else in the Trump campaign engaging in those conversations, which turns out to be wrong. And Sessions had to admit that this week. He admitted that he now remembers both the Papadopoulos exchange and Page’s brief mention of a trip to Russia.

But as Susan Hennessey and Benjamin Wittes described earlier this month, there is a big difference between being wrong and lying, particularly under the law. One is politically embarrassing. The other can be perjury. Members of the House Judiciary Committee took turns trying to close the gap between political embarrassment and a serious legal problem. But Sessions held the line, insisting that he did not lie and that any past omissions resulted from innocent forgetfulness. The statements Sessions made under questioning from the members of the committee bring us no closer to meeting the standard for either a perjury or false statements charge. That could change, of course, if evidence emerged showing that he did remember what he claims to have forgotten. But absent such a development, you shouldn’t hold out hope for a perjury charge.

Sessions pushed back against the Judiciary Committee’s proposed changes to the Foreign Intelligence Surveillance Act. On Nov. 8, the Judiciary Committee approved the USA Liberty Act, a bill that proposes to reform FISA Section 702 by creating, among other things, a requirement that a court order be obtained in order to “access contents … in response to a query for evidence of a crime.” Sessions stood by the view that Section 702 should be reauthorized as is, and he had a number of testy exchanges with members over a point on which some of them really hammered him: What is so wrong with creating warrant requirements for the FBI to query 702 data about Americans for evidence in criminal cases? There’s a month and a half left before FISA Section 702, which expires at the end of the year, turns into a pumpkin. And the attorney general and a major committee are locked in a staring contest over this question. The question is: Who will blink? This week’s hearing didn’t give any indication.

Sessions did a lot to quell concerns that he is angling to sic a special counsel on former Democratic presidential nominee Hillary Clinton. As mentioned above, the Justice Department, in a letter addressed to House Judiciary Chairman Bob Goodlatte (R-Va.), disclosed that it is engaged in determining whether to investigate — and if so, who should investigate — allegations concerning, among other matters, the Clinton Foundation and the sale of mining company Uranium One. The committee focused on three aspects of the Justice Department’s exploration:

On all three points, he left committee members unsatisfied.

On the first point, both the Justice Department’s letter (which was actually sent by Assistant Attorney General Stephen Boyd) and Sessions’s responses in the hearing attempted to dispense with the recusal concern by deflecting to a process answer: All of the potential issues that are under consideration will be evaluated independently, and Sessions will not violate his recusal by engaging substantially with any topics that fall within the ambit of the recusal. (The recusal covers matters involving the 2016 election.) The senior federal prosecutors responsible for this evaluation would report “directly to the Attorney General and the Deputy Attorney General, as appropriate,” the letter says.

The second issue concerned both Republicans and Democrats, although for different reasons. The Republican hook was that several letters sent by the House Judiciary Committee over a matter of months had requested the investigation of a slew of Clinton allegations, and Sessions had failed to respond to any of those letters until the evening before the hearing. And he responded not by appointing a special counsel but by asking some senior federal prosecutors to make recommendations.

For Democrats, the problem was that he didn’t rule out a potential new investigation of Clinton President Trump’s political opponent. Moreover, the action he took aligned too closely with the president’s public requests for an investigation of her and thus suggested the influence of politics on law enforcement. Adding to the suspicion, Judiciary Committee ranking member John Conyers (D-Mich.) complained that House Judiciary Committee Democrats have not had any of their letters answered. In his opening statement, he said the Democrats had sent more than 12 letters to the attorney general asking for information necessary for oversight and had yet to receive one substantive response. This, he alleged, suggests a political nature of any potential inquiry that might arise out of the current review.

The concern that Sessions was toeing Trump’s line on investigating Clinton arose the evening before the hearing, when Twitter — along with the New York Times — was ablaze with speculation about the subtext of the Justice Department’s letter. Law professor Marty Lederman suggested in a tweet that the letter was actually “his way of telling Senators nothing’s coming.” Just Security’s Steve Vladeck tempered alarmist speculation as well by explaining that the letter simply says that the “Justice Department will look into the matter, period.” Wittes likewise tweeted that the letter is “best understood not as a hint to Trump that Sessions will do as the President wants, but as a way of shunting the matter to a mechanism that will enable him not to act — or, to be more precise, that will enable [Deputy Attorney General] Rod Rosenstein not to act.”

After hearing Sessions’s testimony, I am inclined to believe that Lederman, Vladeck, and Wittes are right and that alarmed reaction to the Justice Department letter was premature. Sessions showed no eagerness for a special prosecutor.

And it wasn’t that he wasn’t given the chance. After listing a number of perceived Clinton and Obama missteps and suggesting that they “look like” they’d merit the appointment of a special counsel, Congressman Jordan asked Sessions what it would take to get one. Sessions aggressively cabined Jordan’s expectations: “‘Looks like’ is not enough basis to appoint a special counsel.” This statement, accompanied by other moments in which the attorney general insisted that the Justice Department needed to continue its evaluation before reaching conclusions, suggests that the department is far from finding that a special counsel is necessary. There’s no particular reason to think a group of senior federal prosecutors, given the matters at issue, will come to that conclusion after their review.

Republicans gained no traction on their efforts to turn the Uranium One deal into an alternative Russia scandal. By way of brief summary: In 2010, Rosatom, the Russian state nuclear company, acquired a majority stake in Uranium One, a company that held about 20 percent of the rights to uranium mining output in the United States. The Committee on Foreign Investment in the United States approved the deal as part of its review of foreign investment in U.S. companies for potential national security concerns. The State Department under Hillary Clinton was involved as one member of the inter-agency review process. What makes this purchase controversial by some accounts is the Clinton Foundation also received donations from Rosatom while Clinton was secretary of state.

But while Uranium One has burned up Fox News, it’s apparently not burning up the Justice Department — even under Sessions. And nothing revelatory surfaced in this line of questioning. In response to Congressman Matt Gaetz (R-Fla.), Sessions confirmed that, in theory, he has the authority to appoint special counsel to investigate the Uranium One deal. (As he had throughout all of his testimony, he studiously avoided suggesting that he would appoint one.) The most memorable moment in the Uranium One line of questioning came courtesy of Congressman Gohmert, whose now infamous chart was a bizarre effort to argue that Mueller and Rosenstein were too close to the Uranium One deal to investigate it. Much has been written analyzing the circuitous illustration, and I won’t regale you with further details. Suffice it to say that the chart didn’t seem to convince the attorney general (or anyone else) of much of anything.

But it convinced me of something: that I should make a chart of my own.

The concept of loyalty undergirded many of the questions from House Judiciary Democrats. Some members raised the issue overtly. Rep. Ted Lieu (D-Calif.) asked Sessions point-blank if the president had ever asked him for an oath of loyalty. Sessions said, “No.” Rep. Ted Deutch (D-Fla.) asked Sessions an even more fundamental question on this topic: “Who do you work for?” In honor of Gohmert, I offer the following graphical answer: 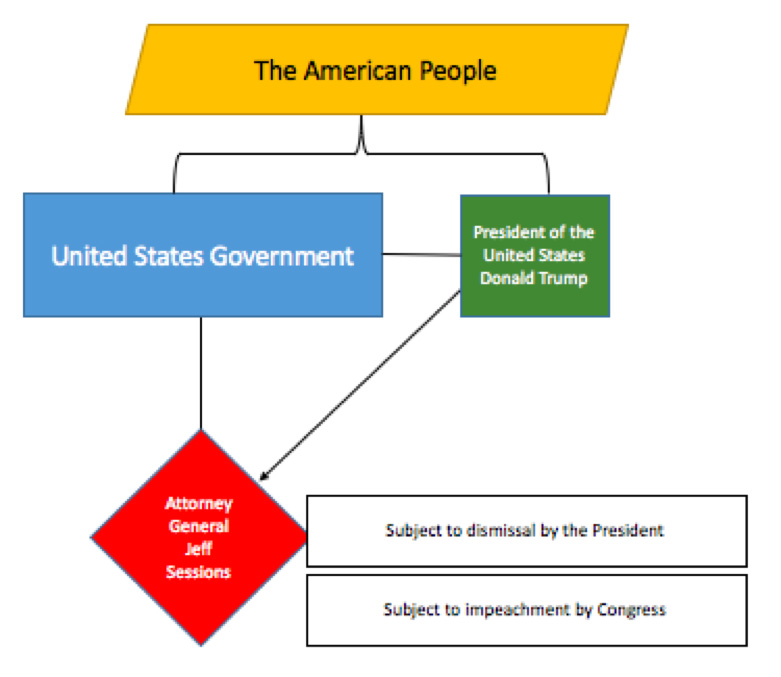 Shannon Togawa Mercer is the managing editor of Lawfare and the national security and law associate at the Hoover Institution. She is originally from the Commonwealth of the Northern Mariana Islands. Twitter: @togawamercer
View
Comments
Tags: Congress, Hillary Clinton, Justice, Lawfare, putin, Russia