A brief survey of the German conservatives already jockeying to replace their matriarch.

German Chancellor Angela Merkel is the latest proof that politicians are invincible only until they aren’t. Not long ago, it was possible to imagine her presiding over Germany in perpetuity. Then earlier this month, after nearly a month of negotiations, exploratory talks for a new four-party coalition — between Merkel’s Christian Democratic Union (CDU), the Bavarian Christian Social Union, the pro-business Free Democrats, and the Greens — unexpectedly collapsed in the wee hours of Nov. 20, blindsiding Merkel and pitching Germany into political turmoil.

Merkel is at her most nimble in high-stakes crises — doubly so when underestimated or threatened — and she has already persuaded Christian Democrats to rally behind her as she pursues a renewal of the coalition with Social Democrats that she has lead for the past four years.

But there’s no guarantee that the Social Democrats’ base is in the mood to accept the necessary compromises — and even if it comes to fruition, another so-called grand coalition is unlikely to prove as stable as the previous iteration. Merkel’s coalition partners are apt to be more ornery, and the parliamentary opposition, which would be headed by the far-right Alternative for Germany party, far more disruptive. Meanwhile, CDU conservatives, long discontented with Merkel’s moderate style, are apt to loudly wonder why they should continue to follow her if she can’t guarantee election victories.

In short, it’s now easier to imagine Merkel being toppled from power before the end of her coming four-year term. But that raises the principal question: Who would take over Germany’s most successful political party after her fall?

Merkel’s saving grace for now is that she has avoided grooming a successor in her own party. “The simple fact is there’s currently no one in the CDU placed to succeed Merkel,” explained Alan Posener of the conservative daily Die Welt. “Over the years she’s overpowered and driven out a dozen rivals, mostly men who thought they’d make a better chancellor.”

But the fact that there isn’t anyone right now with the credentials or will to take down Merkel doesn’t mean there aren’t ambitious figures in the CDU who could one day do so — and maybe even sooner rather than later. And, given the ailing state of the Social Democratic Party, whoever does replace Merkel as leader of her party will, more likely than not, also become leader of Europe’s most powerful country.

Here’s a peek at the top five candidates, what their ascension would mean for both the CDU and Germany, and what to watch for as they jockey with one another in the months ahead: 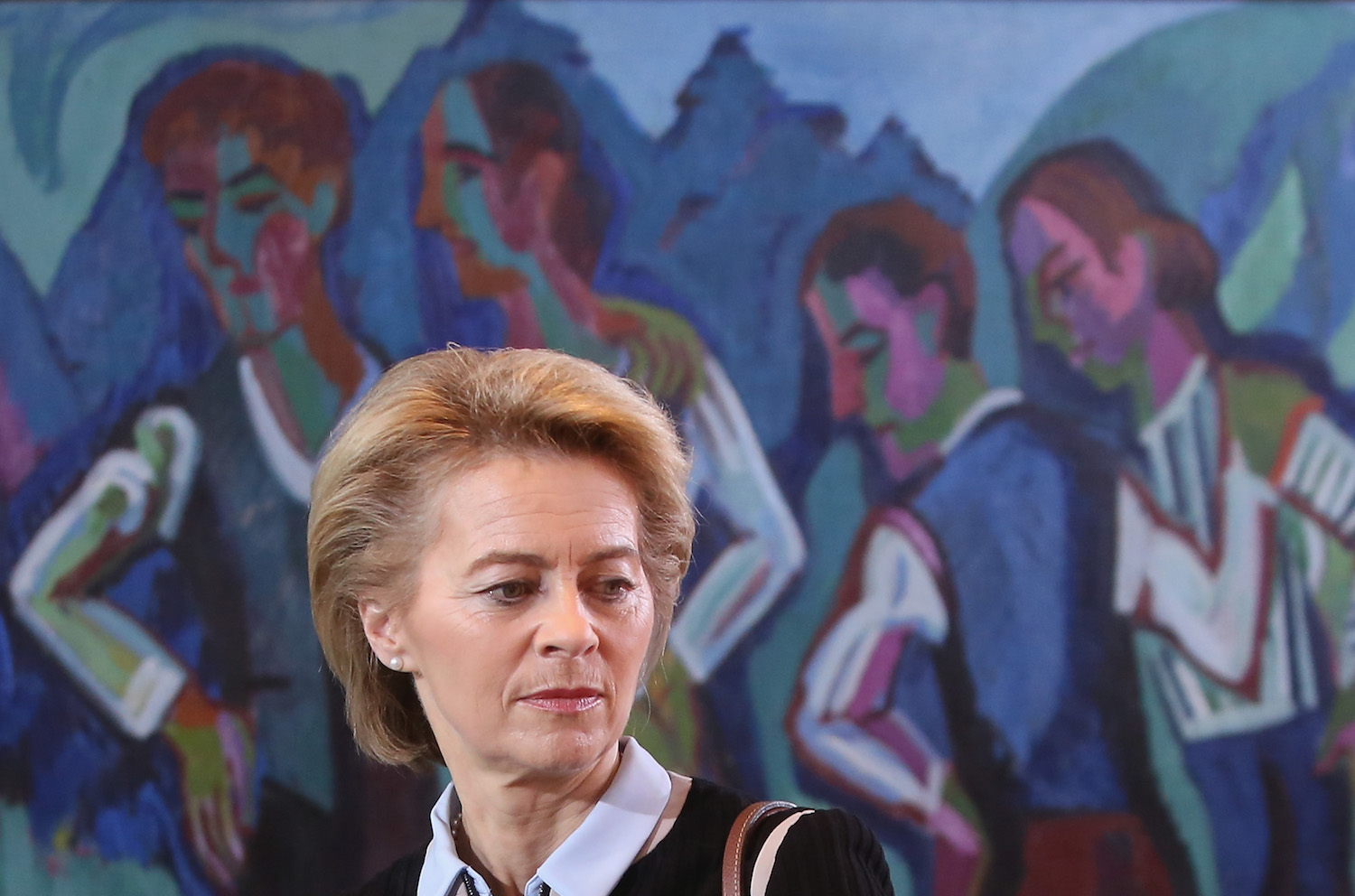 Ursula von der Leyen. Germany’s first-ever woman to serve as defense minister — a petite mother of seven — has proven to be far tougher than her immediate predecessors, having engineered arms deliveries to the Iraqi Kurds in 2014 and 2016 to assist in their fight against the Islamic State. The highly disciplined, blue-blooded scion of a wealthy German political family, von der Leyen certainly sees herself as worthy of the chancellorship. At 59 years old, she’s a plausible pick to follow up Merkel — though with caveats.

Pros: She’s a close confidante of the chancellor who as minister has capably run three ministries — family, labor and social, and defense — in Merkel Cabinets. The defense ministry has, not surprisingly, been her most demanding so far, and yet she wants to keep it. Last year, von der Leyen triggered a noisy controversy in the Bundeswehr, Germany’s army, when she publicly (and perhaps too self-righteously) denounced neo-Nazi cliques in the armed forces. This royally ticked off Bundeswehr personnel, CDU traditionalists, and for some reason the media, too. But entirely to her credit, she weathered the storm, sticking to her guns in the face of virulent (and largely unfair) blowback.

Cons: With the presidency open in 2010, Merkel passed over von der Leyen for Christian Wulff. Von der Leyen was hurt by the snub — an episode that prompted speculation that she too might be on her way out. Yet she held her ground. Her biggest drawback is that she’s even a shade more liberal than Merkel — she voted for gay marriage, for example, and wants a quota for women in top executive posts — and thus poison to conservatives. Also, even though the CDU has been happy to promote her to their own traditionalist base as a supermom extraordinaire who can do it all, many German women resent that image. In fact, polls show two-thirds of German men and women can’t envision her as chancellor. (They also show that Green voters like her more than CDU constituents.)

The Lookout: She should be in the next Merkel-led Cabinet, if there is one, bolstering her impressive CV. A scenario to watch for: While continuing as chancellor, Merkel could step aside as CDU chief in 2019 to make room for a shooting star. The party votes on the CDU’s offices, so it would prove a litmus test of where the post-Merkel CDU stands. Only if liberals firmly have the upper hand could von der Leyen have a shot. 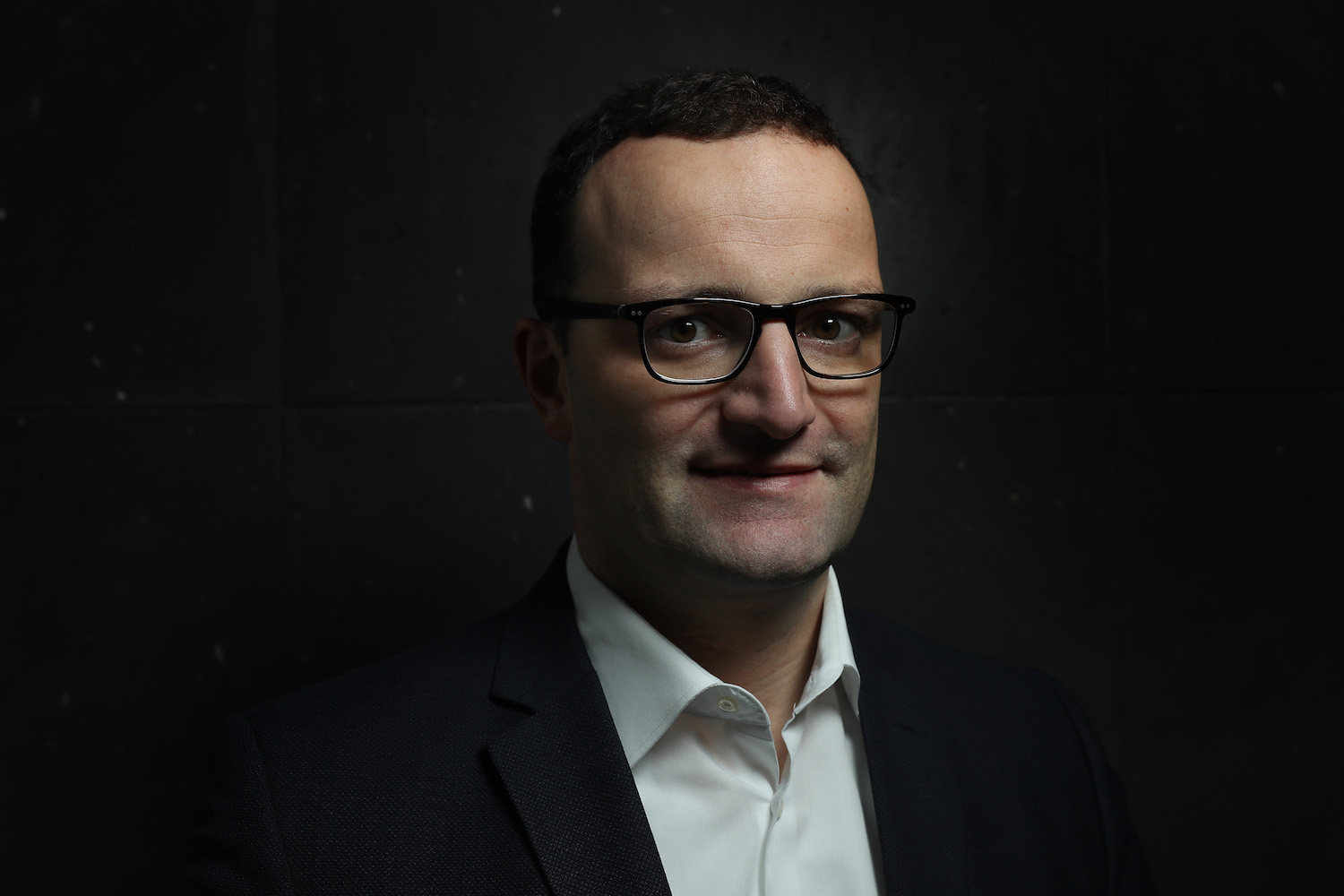 Jens Spahn: The 37-year-old deputy finance minister is an arch conservative from the Catholic Rhineland and currently the CDU’s right wing’s über-liebling. Spahn entered the CDU at the age of 15 and the Bundestag at just 22, which explains his booming self-confidence. His national profile soared when talk shows discovered his gift of gab and willingness to shoot from the hip on conservative topics such as “Islamization,” the burka ban, and the refugee crisis.

Pros: Spahn is a protege of former finance minister (and conservative darling) Wolfgang Schäuble, and even enemies say he’s exceedingly smart and ambitious with a network rich in numbers and clout. CDU right-wingers want desperately to replace Merkel with a genuine fiscal and cultural conservative, and Spahn fits that bill. In 2016, Spahn led a mini-uprising against Merkel, rallying the CDU to narrowly reject dual citizenship for German-born children of foreigners, which the government had approved. This was a slap that Merkel, apparently, has neither forgotten nor forgiven.

Cons: Spahn is youthful in a party that has long emphasized hierarchy — and gay in a party that has long preached traditional Christian values. Spahn was outed by journalists but since has openly talked about being gay, which is a testament to his Western-style conservatism. But dyed-in-the-wool, ideological German conservatives find homosexuality in any form hard to swallow — and thus voted against gay marriage this year while Spahn backed it.

The Lookout: Spahn won’t be anointed Merkel’s successor by Merkel. But it’s anything but certain that Merkel will enjoy the this privilege in the first place. (Historically, this has never happened in Germany.) Spahn plays hardball and will be a thorn in the side of whoever takes over the CDU — if it’s not Spahn himself. 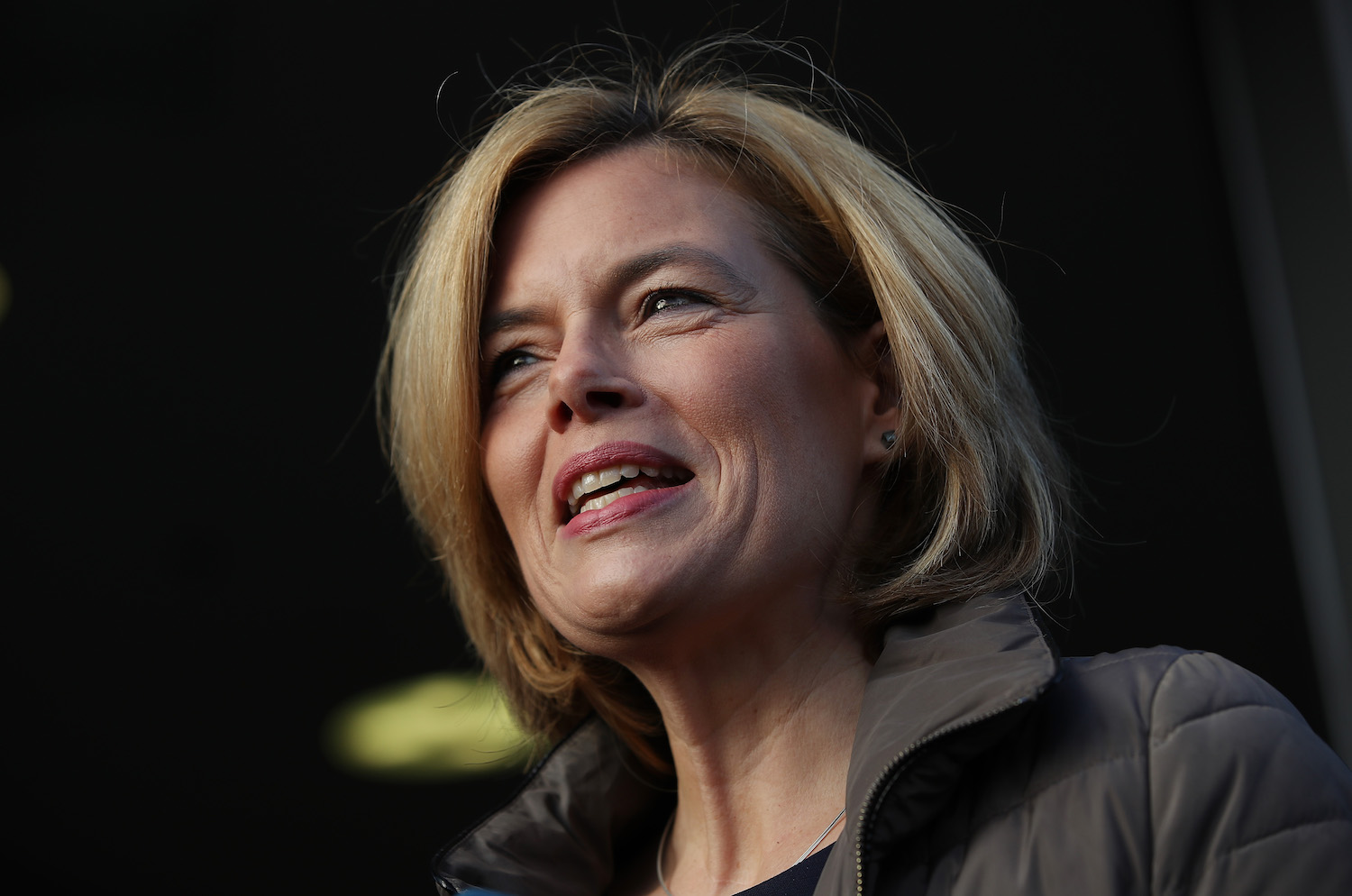 Julia Klöckner: The 44-year-old Klöckner would probably be the front-runner today had the CDU in the state of Rhineland-Palatinate won the early 2016 vote there, which it was expected to do under her guiding hand. But after leading by 10 percentage points, her campaign belly-flopped: an upshot, say some, of the then-ongoing refugee crisis. Despite the stinging defeat, she remains the head of the CDU opposition in Mainz and a national CDU party higher-up; she served as deputy in the federal ministry for agriculture and consumer protection.

Pros: Klöckner is a charismatic made-for-TV politico who spans the CDU’s ideological wings, making her a viable compromise candidate, and with appeal to voters of all ages, too. Even though she bailed on Merkel when her numbers tanked in the runup to the 2016 vote, many believe that Merkel will promote her next term — to test her mettle in national politics.

Cons: She’s branded a loser. Klöckner dropped a vote that conservatives thought they had tied up — refugee crisis or not. (The same unflattering suspicion applies to David McAllister, a German-British, West Berlin-born lawyer who was prime minister in Lower Saxony for three years before he headed the CDU ticket in 2013 that managed to beat out the Social Democrats but lost votes and couldn’t then find a suitable coalition partner. McAllister then took off for the European Parliament, where he is vice president of Europe’s conservative parties.)

The Lookout: Will there be room for her in a crowded Cabinet in the next coalition government? If she gets crowded out, her chances of seizing the chancellery will dwindle. 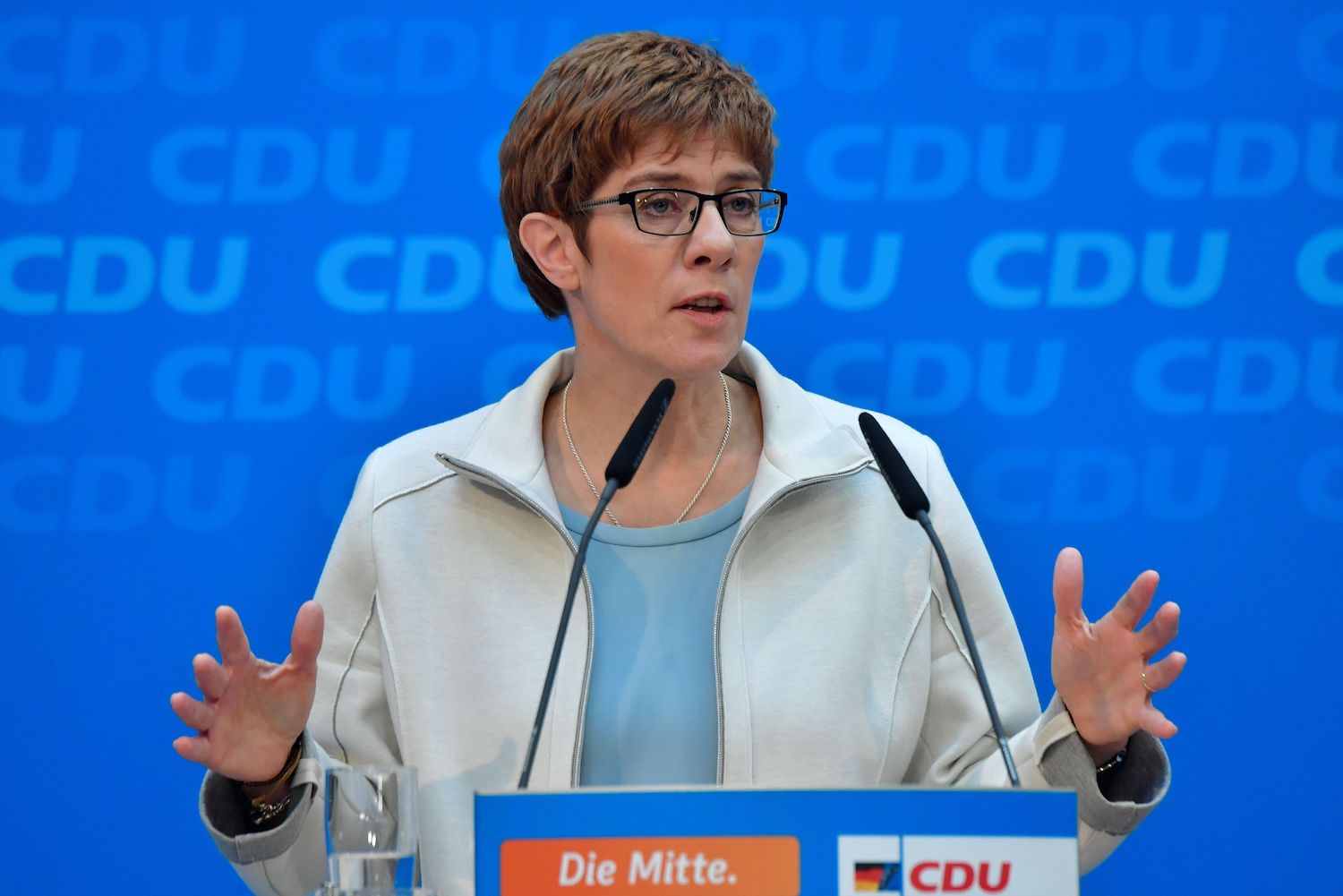 Annegret Kramp-Karrenbauer attends a press conference after a meeting with the CDU’s leadership on March 27 at the party’s headquarters in Berlin. (John Macdougall/AFP/Getty Images)

Annegret Kramp-Karrenbauer: The dark horse from Saarland is the candidate whose personality is most in the mold of the current chancellor: 55-years-old, ultra-serious, pragmatic, happily married – and, unlike the childless Merkel, she’s a mother of three, which earns her extra credit among CDU traditionalists. Kramp-Karrenbauer warmed CDU hearts in March this year by expanding the party’s simple majority in Saarland, the tiniest federal state at under a million people. Indeed, it was AKK, as fans call her, who first punctured the zeppelin of Social Democrat candidate Martin Schulz, who was flying high in national polls at the time. She leans left on social and labor issues (understandable in one of Germany’s rustbelts), but right on gay marriage and euthanasia.

Pros: Kramp-Karrenbauer comes across as intelligent and deadly earnest. Her flexibility apparently appeals to Merkel, who is said to think very highly of her (Cicero magazine called her “Merkel’s number one” even before the 2017 romp.) She headed up the republic’s first Jamaica coalition and could govern with any of the mainstream parties. Falling somewhere between the CDU’s ideological camps, she “is a perfect mix for such a diverse party as the CDU,” writes the Frankfurter Allgemeine Zeitung, “which wants to dominate the middle ground of Germany’s political landscape.”

Cons: Neither her experience nor her name recognition extends beyond diminutive Saarland.

The Lookout: If she can shine under the bright lights of a bigger stage, she’ll be a formidable candidate for chancellor one day. 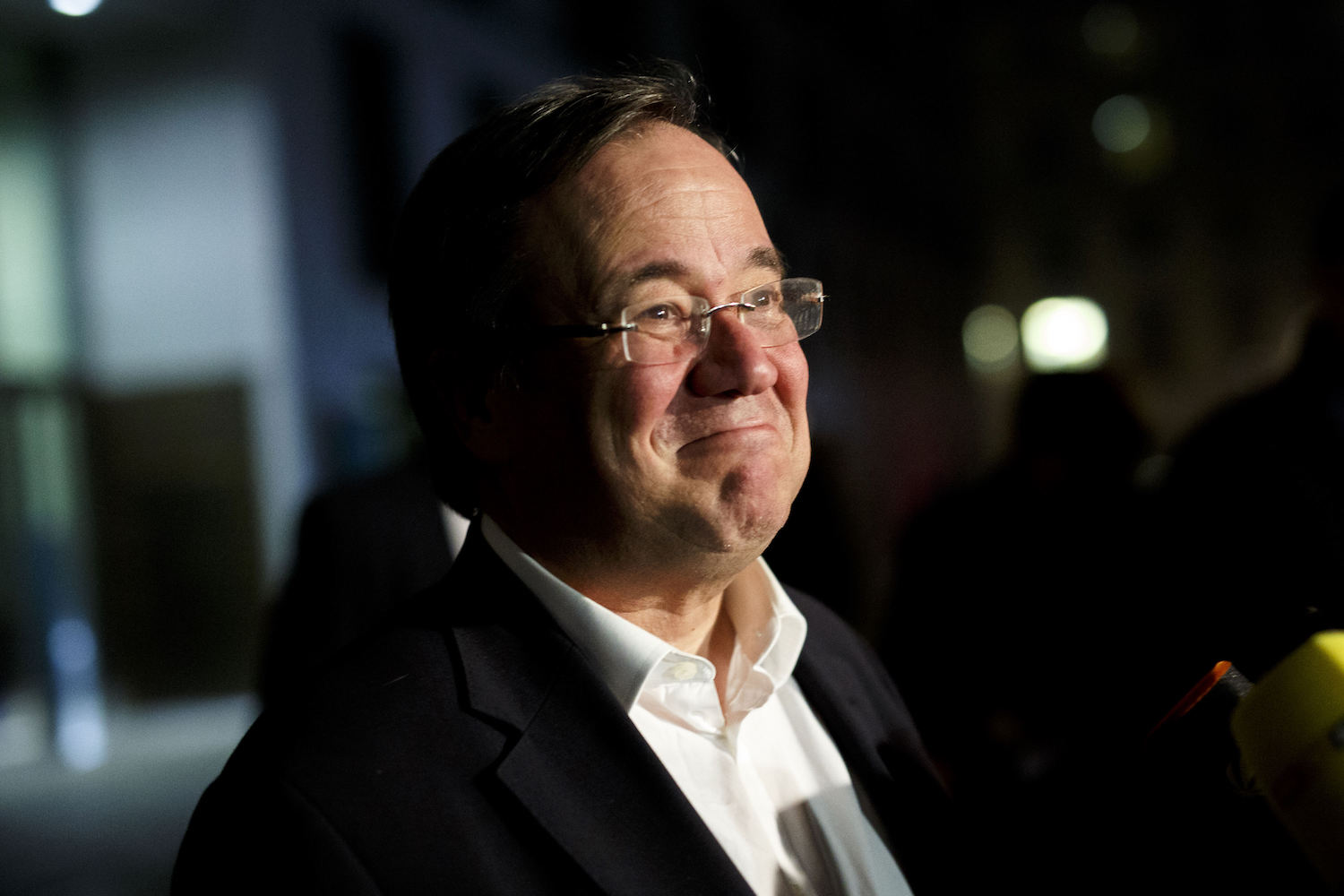 Armin Laschet: Born in Charlemagne’s imperial capital of Aachen in the Belgian-Dutch borderlands, the 56-year-old lawyer currently heads up a center-right government in North Rhine-Westphalia, Germany’s muscular northwestern state (population: more than 17 million). North Rhine-Westphalia was long a Social Democratic bastion until Laschet snatched it away, leading his charge with the rallying cries: no “no-go areas,” zero tolerance against criminals, expel foreign criminals. Laschet’s impeccable Catholic credentials include a stint as editor in chief of the KirchenZeitung Aachen and then director of the church-run Einhard Publishing.

Pros: The cigarillo-smoker is a proven winner. The election victory was a huge coup for the CDU. He played the hard-liner in the campaign but was known as liberal when serving as the state’s integration point man and stood loyally by Merkel during the refugee crisis.

Cons: Laschet is considered a softy and, despite the victory, not particularly charismatic. “He’s competent and by-the-book, but not someone who is seen by the party as capable of kicking off a new era of post-Merkel CDU politics,” according to Stern magazine. A close Merkel ally, Laschet probably isn’t the one to topple her should the party deem it necessary.

The Lookout: CDU colleagues will probably expect Laschet to fulfill a few of his campaign pledges in North Rhine-Westphalia before moving him up the shortlist.

Of course, there’s no saying that Merkel is going anywhere soon. The ball is in her court. But it’s certain that others around her are son going to start preparing to snatch it from her.

Paul Hockenos is a Berlin-based journalist. His recent book is Berlin Calling: A Story of Anarchy, Music, the Wall and the Birth of the New Berlin (The New Press).
View
Comments
Tags: angela merkel, Europe, Germany, Politics