The people, not the government, will pay the price.

During the first year of his administration, U.S. President Donald Trump has taken an increasingly hard line against the government of Venezuela’s president, Nicolás Maduro. Washington has tightened sanctions on Caracas and even suggested a military intervention to remove the Venezuelan leader from office. Twelve months into Trump’s term, Maduro seems even more entrenched in power, and Venezuela’s opposition is more fractured than ever.

U.S. foreign policy toward Venezuela is premised on a series of misconceptions. Perhaps the most widespread and serious one is the idea that Venezuela is a totalitarian dictatorship. While Maduro has certainly done many things to undermine democracy, Venezuela is no North Korea.

Venezuela is not a tyrannical autocracy; it is a deeply divided and polarized society. Public opinion research shows strong and deep-seated support for Chavismo, the movement created by the late populist leader Hugo Chávez, among large swathes of the population. Many voters continue to credit Chavismo with redistributing the country’s oil wealth through its social programs and giving the poor a voice in Venezuelan politics. Around 25 percent of Venezuelans support Chávez’s successor, Maduro — a remarkably high number given the state of the economy — and about 50 percent believe that Chávez was a good president. Recent regional elections have shown that the government coalition is able to mobilize close to 6 million voters to support its candidates — nearly one-third of the country’s adult population, and more than enough to win a low-turnout election. 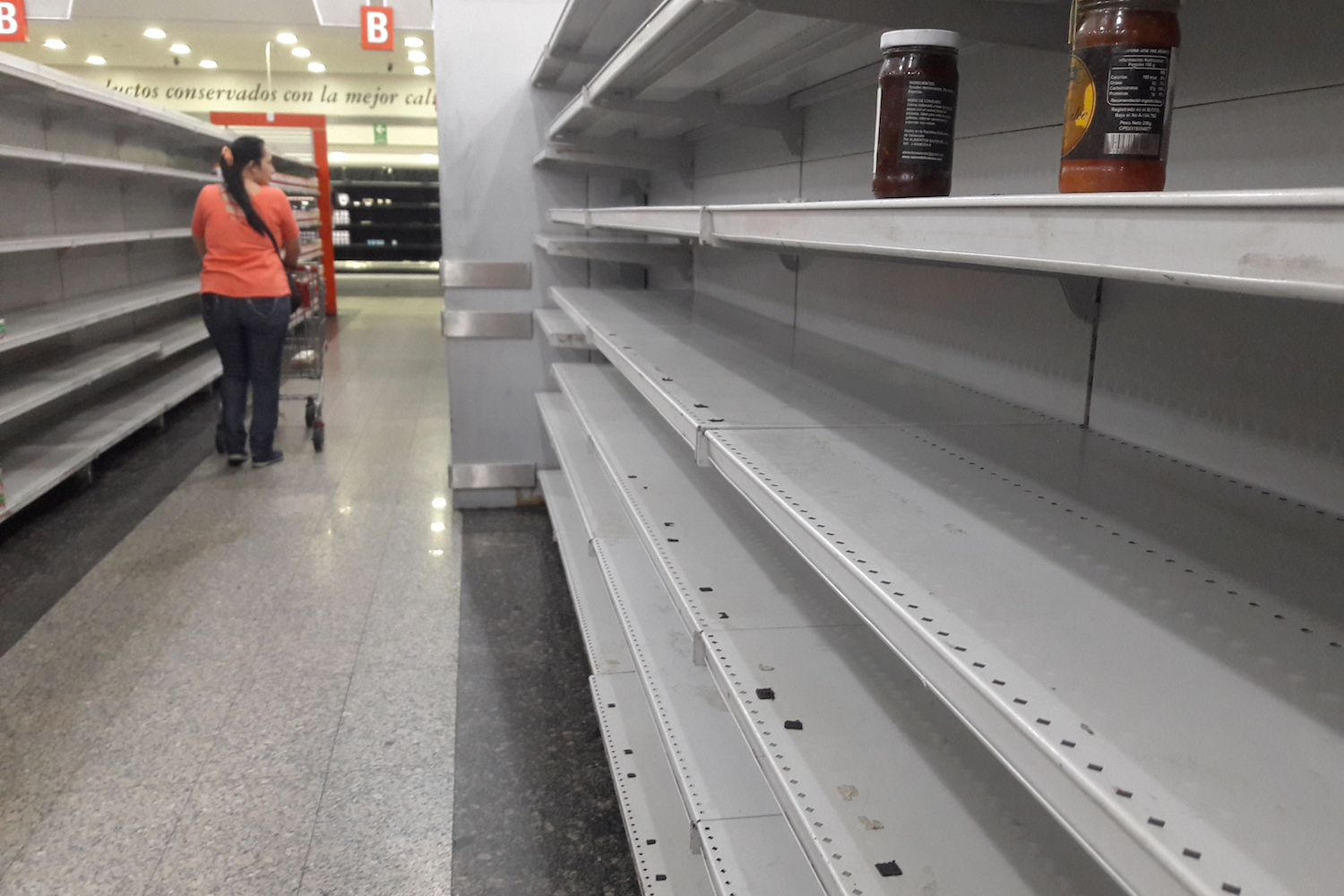 A woman walks between the empty shelves of a supermarket in Caracas, Venezuela, on Jan. 11, 2018. (Juan Barreto/AFP/Getty Images)

In addition to misreading the country’s political mood, American policymakers also seem convinced that the country’s authoritarian leader will only leave power by force. Economic sanctions are ostensibly intended to raise costs for the military and are expected to somehow spur a rebellion against Maduro. This misguided approach stems from a poor understanding of the government’s internal dynamics and an excessive faith in the effectiveness of sanctions as a tool for bringing about regime change.

Extensive academic research has shown that economic sanctions are rarely effective. When they work, it is because they offer the sanctioned regime incentives along with a way out by altering the conduct that led to the sanctions being imposed (such as the rollback of Iran’s nuclear program in exchange for access to international trade). By contrast, the sanctions against Venezuela have backed the regime into a corner, increasing the costs that the government would face upon leaving power and raising the incentives for Maduro to dig in his heels.

An even more problematic idea driving current U.S. policy is the belief that financial sanctions can hurt the Venezuelan government without causing serious harm to ordinary Venezuelans. That’s impossible when 95 percent of Venezuela’s export revenue comes from oil sold by the state-owned oil company. Cutting off the government’s access to dollars will leave the economy without the hard currency needed to pay for imports of food and medicine. Starving the Venezuelan economy of its foreign currency earnings risks turning the country’s current humanitarian crisis into a full-blown humanitarian catastrophe.

That’s what began to happen in 2017. Last year, Venezuela’s export revenues rose from $28 to $32 billion, buoyed by the recovery in world oil prices. Under normal conditions, a rise in a country’s exports would leave it with more resources to pay for its imports. But in the Venezuelan case, imports fell by 31 percent during the same year. The reason is that the country lost access to international financial markets. Unable to roll over its debt, it was forced to build up huge external surpluses to continue servicing that debt in a desperate attempt to avoid a default. Meanwhile, creditors threatened to seize the Venezuelan government’s remaining revenue sources if the country defaulted, including refineries located abroad and payments for oil shipments.

U.S. economic sanctions have stopped Venezuela from issuing new debt and blocked attempts to restructure its existing debt obligations. Major financial institutions have delayed the processing of all financial transfers from Venezuelan entities, significantly hampering the ability of Venezuelan companies to do business in the United States. Even Citgo, a Venezuelan-owned subsidiary that owns 4 percent of the United States’ refining capacity, hasn’t been able to get U.S. financial institutions to issue routine trade credit since sanctions were imposed.

Ever since the Vietnam War, most American policymakers have understood that foreign policy is not just about outgunning your opponent but also about winning the hearts and minds of the people. But 56 percent of Venezuelans oppose U.S. financial sanctions; only 32 percent support them. When it comes to foreign military intervention in Venezuela, 57 percent of those surveyed were opposed, while 58 percent support dialogue between the government and the opposition — and 71 percent believe that those talks should focus on seeking solutions to the country’s economic problems.

Venezuelans have good reason to be concerned that ordinary people will ultimately pay the price for sanctions. Recent data show that in the two months after Trump imposed financial sanctions, imports tumbled an additional 24 percent, deepening the scarcity of basic goods and lending credibility to the government’s argument that U.S. policies are directly harming Venezuelans.

Instead of undermining Maduro, sanctions are making it increasingly difficult for the country’s opposition to convince voters that the welfare of Venezuelans — rather than driving Maduro from power — is its real priority. It is not the first time the opposition has made this mistake.

Back in 2002, opponents of then-President Chávez called for a massive strike in the country’s oil sector. The strike brought oil production to a standstill and caused a double-digit recession in an attempt to get Chávez to resign. This event single-handedly convinced Venezuelans that they could not trust a political movement that was willing to destroy the economy in order to attain power. In a recall referendum held two years later, voters resoundingly backed Chávez.

The United States and the anti-Maduro opposition will not win the hearts and minds of Venezuelans by helping drive the country’s economy into the ground. If Washington wants to show it cares about Venezuelans, it could start by providing help to those most affected by the crisis. Extending protected migrant status for Venezuelans in the United States and providing support for neighboring countries dealing with an upsurge of Venezuelan immigration would be a start, as would support for apolitical organizations, such as the United Nations Development Programme, that have managed to channel aid to the country. The U.S. should also support negotiations aimed at creating institutions that make the coexistence of the country’s feuding political factions possible — rather than encouraging the wholesale replacement of one by the other.

I, as much as anyone else, would like to see Maduro go. His government’s gross mismanagement of the economy is the primary (but not the only) cause of the deepest economic crisis in Latin American history. The annulment of the opposition’s two-thirds majority in the National Assembly through trumped-up and unsupported charges of vote-buying was an assault on the country’s constitution and the catalyst for the political tensions that led to more than 100 deaths in last year’s protests. There is abundant evidence of serious human rights abuses during those protests, which merit an international investigation to determine the potential complicity of high-ranking members of government.

But for the same reasons that I oppose Maduro, I also vehemently disagree with the call voiced by President Trump and some opposition commentators for foreign military intervention in Venezuela. Whether we like it or not, Maduro is serving as president of Venezuela because he won an election recognized by the international community. Even if Maduro were impeached, he would then be replaced by his vice president, who could in turn appoint another vice president to serve in case he himself were impeached. Even a cursory look at the Venezuelan constitution shows that it does not entitle the National Assembly to name a new president. Conducting a military intervention to replace a constitutionally elected president with an unconstitutionally appointed one would be an even worse violation of Venezuelan law than anything that the Chávez and Maduro regimes have ever been accused of.

Maduro must leave office the same way he arrived: through the votes of Venezuelans. Venezuela is scheduled to hold a presidential election this year. Rather than encouraging the pipe dreams of military invasions and coups, the overriding priority of Venezuela’s opposition should be to convince voters that it would do a better job of leading the country. Trump and his administration must not continue to make that task harder.

Francisco Rodríguez is chief economist at Torino Capital and is a former head of the Venezuelan Congressional Budget Office.

The Air Force wants a key regional ally to get new F-16 fighter jets to deter threats from Caracas.

Venezuelan Democracy Was Strangled by Cuba

Venezuela Is at a ‘Tipping Point’

The former head of U.S. Southern Command says, despite the failed uprising, Maduro’s regime is crumbling.