What Would Happen if Terrorists Attacked the Super Bowl With Drones?

Small unmanned aircraft are a threat to high-profile events, but taking them down safely is almost impossible.

Drones could present a potential major threat to Sunday’s Super Bowl, but there’s no way to disable or shoot them down without endangering the people below, according to U.S. law enforcement documents and interviews with security officials on the ground.

Vast resources have been deployed to identify, track, and intercept unmanned aircraft deemed a threat, but drones “continue to provide a significant challenge to special event security in the U.S.,” a Department of Homeland Security official, who asked not to be named, told Foreign Policy. “In the civilian special event environment, there are no safe mitigation technologies available at this time.”

The official said some of the biggest concerns for drones at the Super Bowl were that the aircraft can “cross hardened perimeters with little or no warning” and that the laws and flight restrictions in place only help prevent incursions from those who are not trying to cause harm.

More problematic is that the techniques currently used to disable drones could “imperil crowds where a disabled UAV [unmanned aerial vehicle] may land,” the official added.

The Minneapolis stadium hosting the Feb. 4 game between the New England Patriots and the Philadelphia Eagles has a closed roof. Law enforcement agencies are concerned about drones targeting the event but also about a potential attack directed at events surrounding the Super Bowl.

“[I]ndividuals could use UASs [unmanned aircraft systems] to conduct surveillance of US law enforcement, facilitate terrorist or criminal activity, or disrupt the event,” says a Jan. 23 report, marked “for official use only,” assessing threats to the Super Bowl. “ISIS has also weaponized UASs as IEDs [improvised explosive devices] overseas, a tactic HVEs [homegrown violent extremists] may attempt to replicate in the United States.”

The joint law enforcement report, a copy of which was reviewed by FP, says there is no specific, credible threat directed against this year’s Super Bowl but still identifies drones as a concern.

Fears about drones being used as terrorist weapons have been on the rise in recent years.

The report cites a November 2017 incident in Southern California where someone used a drone to distribute leaflets over spectators at two separate professional football games, indicating a potential tactic for delivering explosives.

More concerning is the Islamic State’s use of a small recreational-use drone as an explosive delivery system in Iraq in October 2016. It was recovered after being shot down by coalition forces and transported to a nearby camp where it exploded while being examined.

In response to the threat, and per protocol for major public events, the U.S. Federal Aviation Administration (FAA) has put in place temporary flight restrictions for the game, and Minneapolis has enacted an additional “no-drone zone,” an ordinance that has misdemeanor sanctions for violators.

The North American Aerospace Defense Command (NORAD) is charged with enforcing these restrictions and protecting airspace around the stadium. Mostly, this means that Black Hawk helicopters and military aircraft will monitor Sunday’s game from up in the air, said Maj. Andrew Scott, a military spokesman. They’ll escort planes that accidentally veer into no-fly areas safely out of those areas.

So far there have been no intercepted aircraft in Minneapolis this week in advance of the Super Bowl outside of their training exercises, Scott told FP on Friday. In the past, NORAD has responded to requests from law enforcement on the ground to check suspicious drones, which they did in one case using a helicopter (it was deemed not a threat).

A former military official who worked on an interagency task force related to countering drones said NORAD has the authority to coordinate the tracking of drones and organize the response, which other agencies would be responsible for carrying out. Various exercises take place every year where government law enforcement agencies, military and defense contractors, and others go to test and show off their ways to take down drones, the former official said.

At an event like the Super Bowl, a command center would normally be set up with representatives from various agencies, which would coordinate the detection and interception of a potential drone threat, the former official said. The relevant agencies map out their response beforehand based on the no-fly zone and how much time they would need to intercept the drones.

FP reached out to more than a dozen law enforcement agencies and military divisions to see who had responsibility for intercepting a drone threat. Several agencies mentioned that the Secret Service was authorized to take down or intercept a drone.

The Secret Service did not respond to questions from FP. Neither did the NFL, Minneapolis police, and various other agencies contacted.

This is not the first time that government agencies have had to worry about the threat of drones to the Super Bowl.

A Department of Homeland Security report published last fall on the 2017 Super Bowl details a number of drone encounters and other issues faced by law enforcement in Houston, where that Super Bowl was held, and provides recommendations for securing the upcoming game.

The report — titled “2017 Super Bowl: Unmanned Aircraft Encounters Highlight Risk to Future Special Events, Increased Demand on Law Enforcement” — lists 12 encounters with drones during Super Bowl week. One of those occurred while temporary flight restrictions were in place; the others happened earlier in the week during other events before flight restrictions were in place on game day.

The encounters include a drone flown by a known but unspecified gang leader, a drone recovered in a vehicle during a search, one that entered into restricted airspace, and other incidents involving filming protests.

Half the drones in last year’s encounters, according to the DHS report reviewed by FP, were made by the Chinese company DJI, which holds about 70 percent of the drone market. 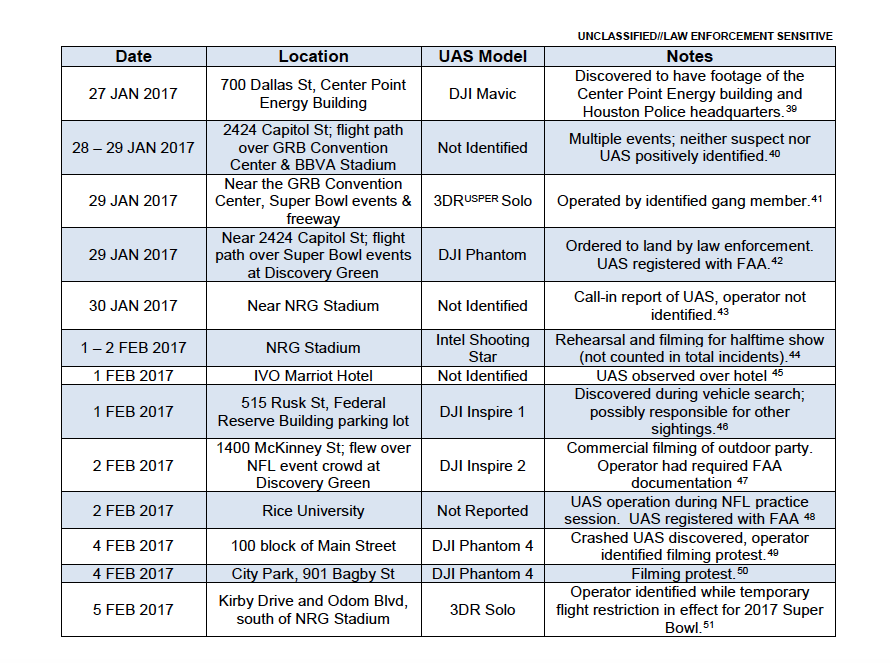 The DHS official confirmed that technologies are available and being used at the Super Bowl to identify incursions into controlled airspace and that these technologies will also be able to locate the offending UAS operator. None of this means that there’s a safe way to take out the threat.

A cottage industry of drone countermeasures has grown up in recent years: companies have advertised everything from devices that disrupt or jam the signal used to control drones, to shootable nets that would snag them in flight. Countermeasures run the risk, however, of bringing down a drone over people.

Super Bowl performers are increasingly incorporating drones into their shows but also have tried to keep those details under wraps from the public. Last year, Lady Gaga’s halftime show featured hundreds of small drones, and portions of it were filmed in advance, days before the game.

The FAA, in response to queries from FP, said it does not regulate indoor use of drones and referred questions about Justin Timberlake using drones in his upcoming halftime show to the NFL, which didn’t return requests for comment.

Timberlake posted a video on Instagram last week showing his rehearsal for the halftime performance, with a blinking drone in the background.

Wuhan’s Virus and Quarantine Will Hit the Poor Hardest