Giggling at the Gulag

"The Death of Stalin" turns tyranny into comedy.

One might assume that the creator of the hit TV series Veep would find the Donald Trump era promising, if only for professional reasons. Yet Armando Iannucci has been vocally unenthusiastic about the 45th U.S. president’s comedic potential. “What can you do and say that hasn’t already been said and done by him?” Iannucci asked at a press conference last September. “I just find it difficult to be funny about him.”

Trump’s triumph has created a broad audience of bereaved liberals eager to see the president and his supporters get a good dressing-down from their favorite late-night comics. And yet, as the effects of Trump’s antics take shape, one must wonder if the comedy world — not unlike the media or the country’s political institutions — was woefully unprepared for his ascendance. Iannucci has been vocal about the challenge that Trump poses for comedians. “He takes things and then exaggerates and twists them until they become absurd, which is what most comedians would do in response to him,” Iannucci told the Independent in April 2017, “but he does that anyway.” The jokes write themselves, and consequently tend to lack creativity and insight.

After decades of satirizing contemporary politics, Iannucci has started looking for inspiration elsewhere. His upcoming projects include a feature film based on Charles Dickens’s David Copperfield and a sci-fi television series called Avenue 5, which will take place in outer space. His new film, The Death of Stalin, out in the United States on March 9, unfolds in an environment no less alien to contemporary viewers: the upper echelons of the Soviet government in the 1950s. A Soviet-era political drama with a comic twist might have seemed a hard sell two years ago. History, however, operates in strange ways, and in 2018, the film is being hailed as an urgent, politically relevant work — so much so that Russia has already banned it.

The Glasgow-born writer and director is one of the most capable and intelligent satirists of contemporary politics. He made his name among British audiences in the mid-1990s with The Day Today, an absurdist parody of TV news for BBC2. In the 2000s, he turned his attention to the inner workings of government bureaucracy with The Thick of It, a work of pseudo-documentary realism. The show’s breakout character — political operative Malcolm Tucker, a prolifically profane, cynical sadist — embodied its caustic sensibility. Tucker also appeared in Iannucci’s Iraq War-themed 2009 film In the Loop, which introduced his comedy to an American audience, leading to the Emmy-anointed success of Veep. 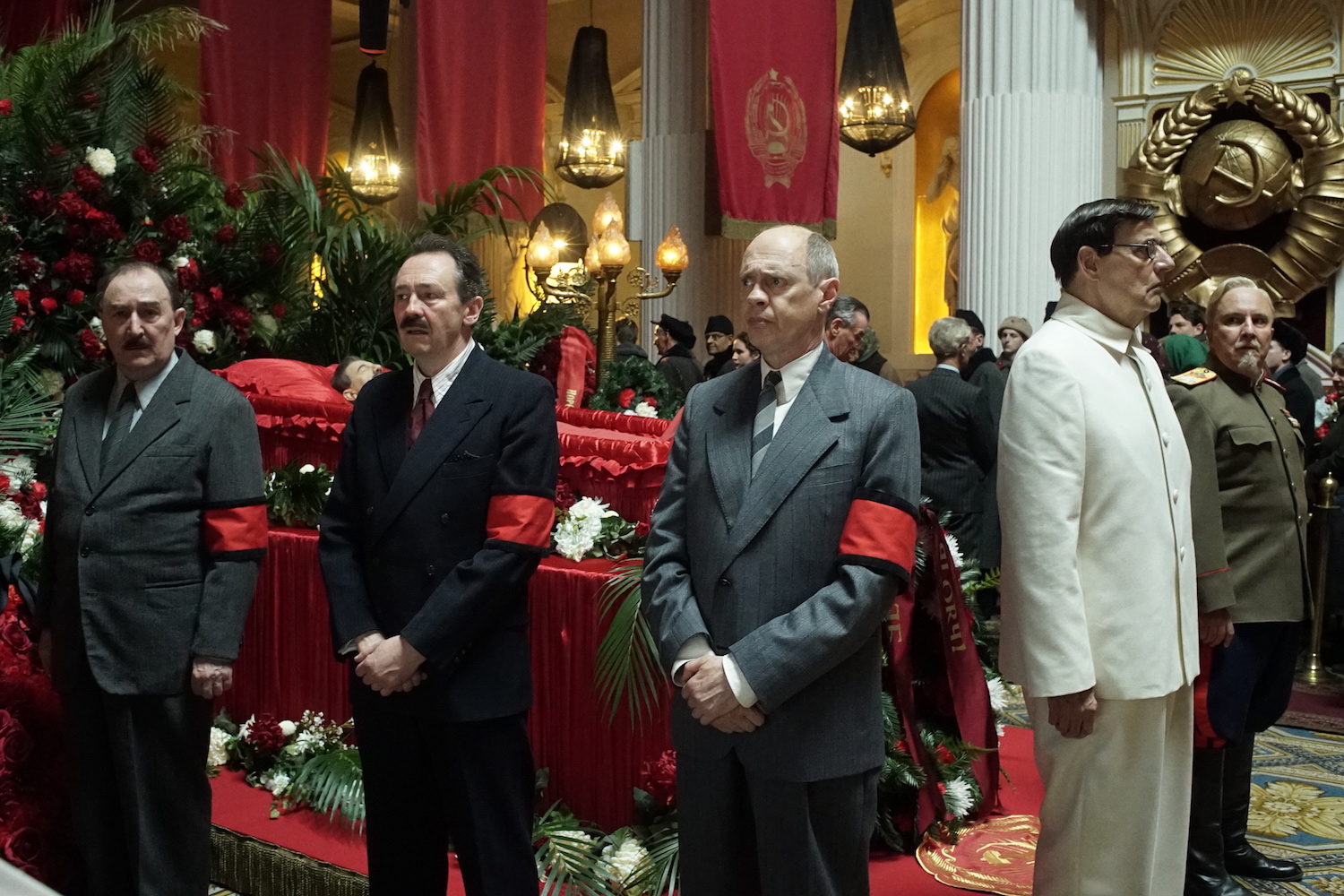 A still from “The Death of Stalin.” (IFC Films)

The Death of Stalin is Iannucci’s first project to take place outside of an Anglo-American context. Based on a French graphic novel by Fabien Nury and Thierry Robin, the film tackles the period of confusion that followed the abrupt end of Soviet dictator Josef Stalin’s roughly 25-year reign. This being Iannucci, the situation is played for laughs, despite the looming threat of political terror. Until recently, this subject matter might have held only niche appeal, but Trump’s election has made authoritarianism mainstream again, while the Russia election meddling scandal has made Kremlinology a hot topic for the first time since the end of the Cold War. Iannucci himself has at times played up the contemporary resonance of his film. “Stalin called anyone who disagreed with him an enemy of the people,” the director told the Atlantic’s Julia Ioffe. “Trump calls them unpatriotic and false.”

But Stalin’s attacks on his critics didn’t end with name-calling. If the characters and events in The Death of Stalin feel familiar, it’s less an indication that we’ve entered a new age of despotism and more a consequence of Iannucci’s urge to give the film contemporary relevance. The film’s casting feels a bit like historical fantasy football. Popular American character actors Steve Buscemi and Jeffrey Tambor play Nikita Khrushchev and Georgy Malenkov, respectively, while Monty Python’s Michael Palin plays Stalin’s longtime foreign secretary Vyacheslav Molotov. Accomplished stage actor Simon Russell Beale has perhaps the juiciest role of the bunch, that of the film’s effective baddie, secret police chief Lavrentiy Beria. Iannucci has discarded the staid official language of Marxism-Leninism in favor of a heterogeneous mélange of British and American zingers; the characters all speak with the accents of the characters playing them, and the writing follows suit.

Nonetheless, Iannucci, who studied Milton in an Oxford doctoral program before committing to comedy full time, appears to have a genuine interest in the granular detail of his subject matter. He is known for his in-depth research methods — he once used hastily obtained BBC credentials to bluff his way into the U.S. State Department to gather visual references for In the Loop — and likewise travelled to Moscow for The Death of Stalin. The film is full of absurd details gleaned from the historical record — from the dictator’s party habits to Beria’s affinity for pranks. One of the film’s more slapstick subplots — Stalin’s son Vasily’s frantic efforts to replace a Soviet Air Force hockey team that had been killed in a plane crash — is based on a real disaster in in 1950.

Iannucci’s interest in history extends beyond comic details. To his credit, he makes a good faith effort to do justice to the horror of the times, something that poses a significant challenge within a zippy comedy. The film’s first act contains two violent purge scenes that set the stage historically and also establish Beria as the film’s villain. Both, however, unfold in a too broad a manner for the horror to fully register. Beria’s secret police go about rather indiscriminately arresting and killing all sorts of people, burying the quiet dread of Stalinist terror under imagery that has become shorthand for totalitarianism.

As the film goes on, it is the secret police chief Beria who emerges as the film’s focal point. Iannucci doesn’t paper over his worst aspects, showing his serial sexual predations, including his sadistic habit of leaving his rape victims with flowers as a morbid souvenir. In other words, Lavrentiy Beria was anything but a funny man, and yet it’s striking how seamlessly he fits into Iannucci’s comic world. A brutal cynic and competent enforcer, he’s essentially Malcolm Tucker, if he actually made good on his cavalcade of obscene, violent threats. If the clearly evil, yet wised-up Beria is particularly compelling, it’s also because of Iannucci’s clear disdain for the characters who haven’t yet learned to twist the system to their own ends. Jeffrey Tambor’s Malenkov is clueless, while Molotov’s total servility is nearly tragic. In this world, it’s the savvy operators, who at least manage to turn the system to their advantage, who earn what passes as respect.

The Death of Stalin proves to be a very peculiar satire, in that the object of its ridicule is not always clear. The film’s characters seem altogether too modern and Western for it to function as an honest-to-god reckoning with Stalinism (for that, seek out Russian director Aleksei German’s 1998 film, Khrustalyov, My Car! — a pitch-black retelling of the same events shot through with a feel for the demonic worthy of Nikolai Gogol). At the same time, however, Iannucci’s film is too exotic to comment directly on current events, even through allegory. For all the excitement surrounding Russia’s role in the world these days, Stalinism proper is likely to remain a distinctly 20th-century phenomenon.

Instead, The Death of Stalin satirizes Iannucci’s personal ideas of human nature as it functions in the political realm. Whether in London, Washington, or Moscow, history is driven by the petty schemes of insiders, which are always rife with unintended, though sometimes drastic, consequences. If the film has contemporary resonance, it’s not as a satire not of Stalin or Trump, but of the class of self-interested underlings who enable all modern politicians. It’s in this way that Iannucci’s comedy maintains its satirical bite. The political is personal — humorously, and lethally so.

Daniel Witkin is a filmmaker and writer based in New York City. His work has appeared in Reverse Shot, Film Comment, and the Forward, among other publications. Twitter: @dzwitkin
View
Comments
Tags: Argument, comedy, film, History, movies, Russia, satire, TV/Film

How One Social Media App Is Beating Disinformation

The World’s Wild and Crazy Vaccine Ride Is Just Starting