A Brief History of Attempted Russian Assassinations by Poison

Russian security services appear to be increasingly targeting dissidents and renegade spies for death by poison.

With the announcement by British police on Wednesday that a former Russian spy was poisoned by a nerve agent, Sergei Skripal joins the long ranks of those who have run afoul of the Kremlin and subsequently fallen ill or died under what can only be described as suspicious circumstances.

Skripal was walking with his daughter on Monday when they fell ill, collapsed on a park bench, and were promptly rushed to the hospital, where they remain in critical condition. On Thursday, British police said that around 21 people had sought treatment as a result of exposure to the unidentified poison. A police officer who aided the two is in stable condition, and is conscious and talking.

“This is being treated as a major incident involving attempted murder by administration of a nerve agent,” Mark Rowley, Britain’s chief police official for counterterrorism and international security, said.

A Russian court convicted Skripal of spying on behalf of Britain in 2006, but he was returned to England as part of a spy swap in 2010.

With the announcement by British police that a nerve agent was involved, suspicion immediately fell upon Russian spy services, which have a history of assassinating renegade spies and dissidents, sometimes with poison.

The Kremlin immediately denied any involvement, and no conclusive evidence has emerged tying Russian security services to the attempted assassination.

The use of a highly toxic nerve agent, however, is typically only employed by state security services, and Russia is not alone in deploying nerve agents against its enemies. Last year, North Korean agents assassinated leader Kim Jong Un’s half brother using the nerve agent VX. And in 1997, Israeli agents attempted to assassinate a Hamas leader, Khaled Mashal, with a lethal dose of fentanyl.

Yet the list of Russian men and women targeted for assassination after falling afoul of the Kremlin includes quite a few felled by poison.

The tactic sends a clear message to those thinking of defection or dissent, says Steve Hall, who up until his retirement in 2015 ran Russia operations for the CIA: “We’ll find you.” 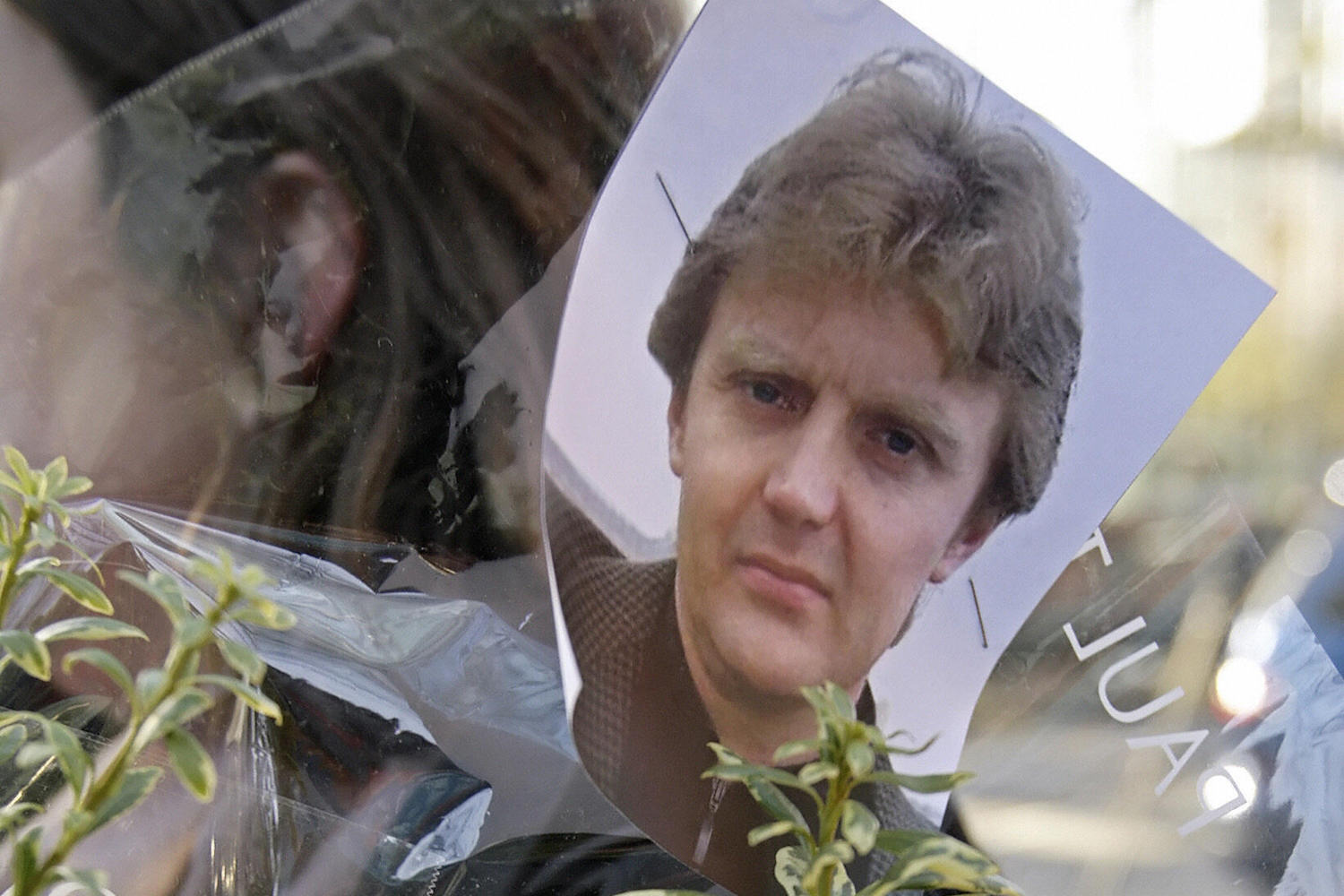 A picture of former Russian spy Alexander Litvinenko is pinned to flowers outside the University College Hospital in central London on Nov. 23, 2007. (Leon Neal/AFP/Getty Images)

Far and away the most famous example of an assassination by poison is Alexander Litvinenko. The dissident Russian spy was killed in 2006 when he ingested polonium-210, a highly radioactive substance, that had been slipped into his tea.

Litvinenko fled Russia in 2000 and established himself as a prominent critic of President Vladimir Putin and Russia’s security services. He authored a book accusing the Russian FSB — the successor to the KGB — of complicity in the 1999 apartment bombings that Putin blamed on Chechen separatists, served as the pretext for renewed military operations there, and acted as Putin’s springboard to power.

The use of polonium to kill Litvinenko served another purpose. “It’s a terrible way to die,” Hall says. “It sends a particularly strong message.”

For all that, Litvinenko probably was none too surprised. ”The view inside our agency was that poison is just a weapon, like a pistol,” Litvinenko told the New York Times two years before his assassination. ”It’s not seen that way in the West, but it was just viewed as an ordinary tool.” 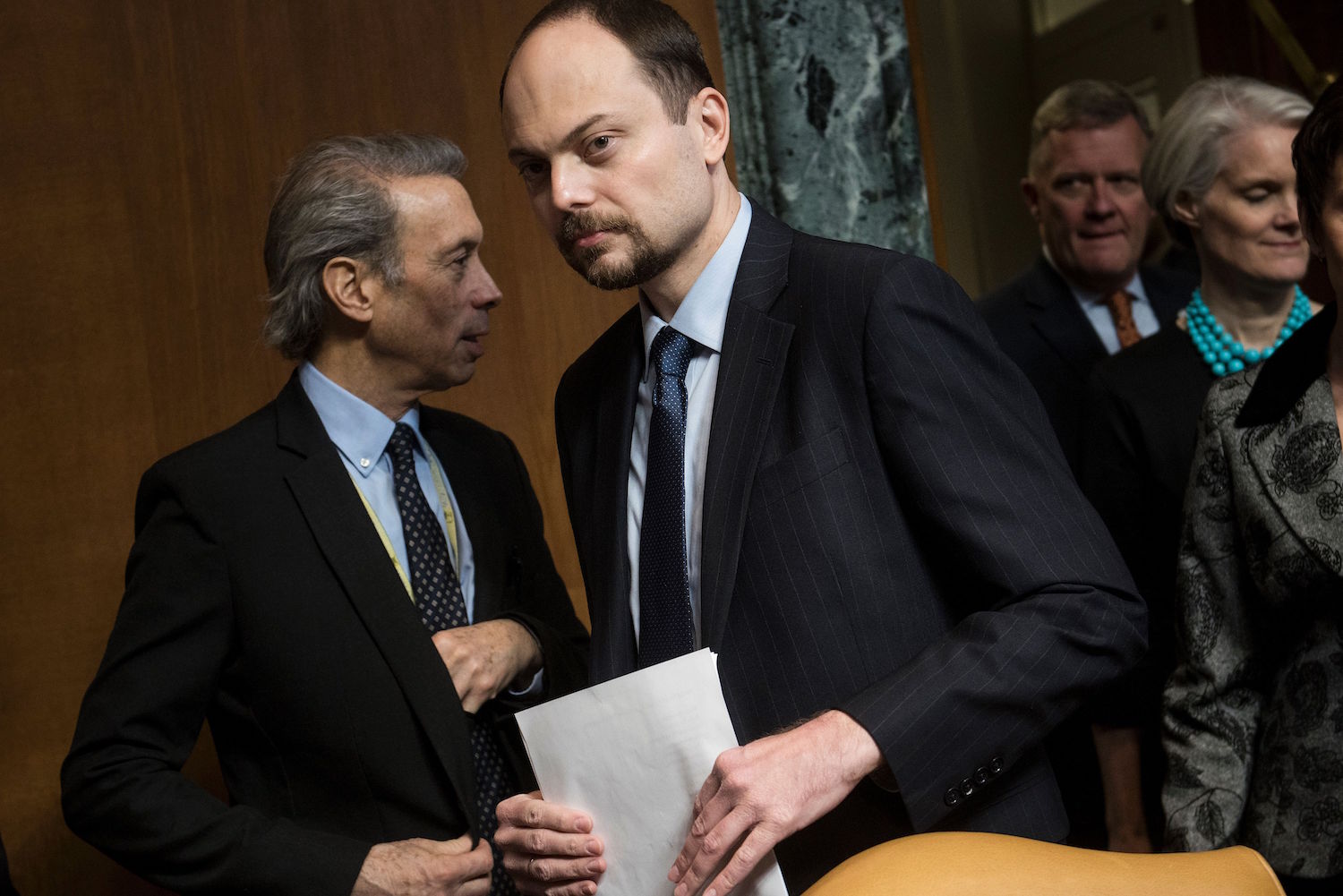 The Russian opposition politician Vladimir Kara-Murza holds a distinction he would probably like to do without: He has survived attempted assassination by poison not once, but twice.

The first incident came in 2015, when he suddenly fell ill during a meeting. “In the space of about 20 minutes, I went from feeling completely normal to having a rapid heart rate, really high blood pressure, to sweating and vomiting all over the place, and then I lost consciousness,” Kara-Murza told the New York Times in 2016. Doctors told him he had been poisoned.

Then, in 2017, it happened again. “I knew straightaway what it was because this was the second time in two years that this happened, and it, and it began almost identically in the same way,” Kara-Murza told NBC.

His doctors have told him he likely won’t survive a third attempt.

A replica of the umbrella that a KGB agent used in 1978 to kill Bulgarian dissident and radio broadcaster Georgi Markov is displayed at the International Spy Museum in Washington, D.C., on July 16, 2002. (Mark Wilson/Getty Images)

In September 1978, Georgi Markov was waiting for the bus near London’s Waterloo Bridge when a man jabbed him in the leg with an umbrella. He immediately fell ill and was rushed to the hospital.

The umbrella, as it turned out, was tipped with a pellet filled with ricin, the toxin produced from the castor plant. In the history of Russian assassinations by poison, Hall calls it the “granddaddy of them all.”

A dissident Bulgarian writer, Markov defected in 1968 and began working in Western broadcasting. He was on his way to work at the offices of the BBC when he was killed by an agent believed to be working on behalf of the Bulgarian secret service. It has long been speculated the assassination was carried out with KGB assistance. 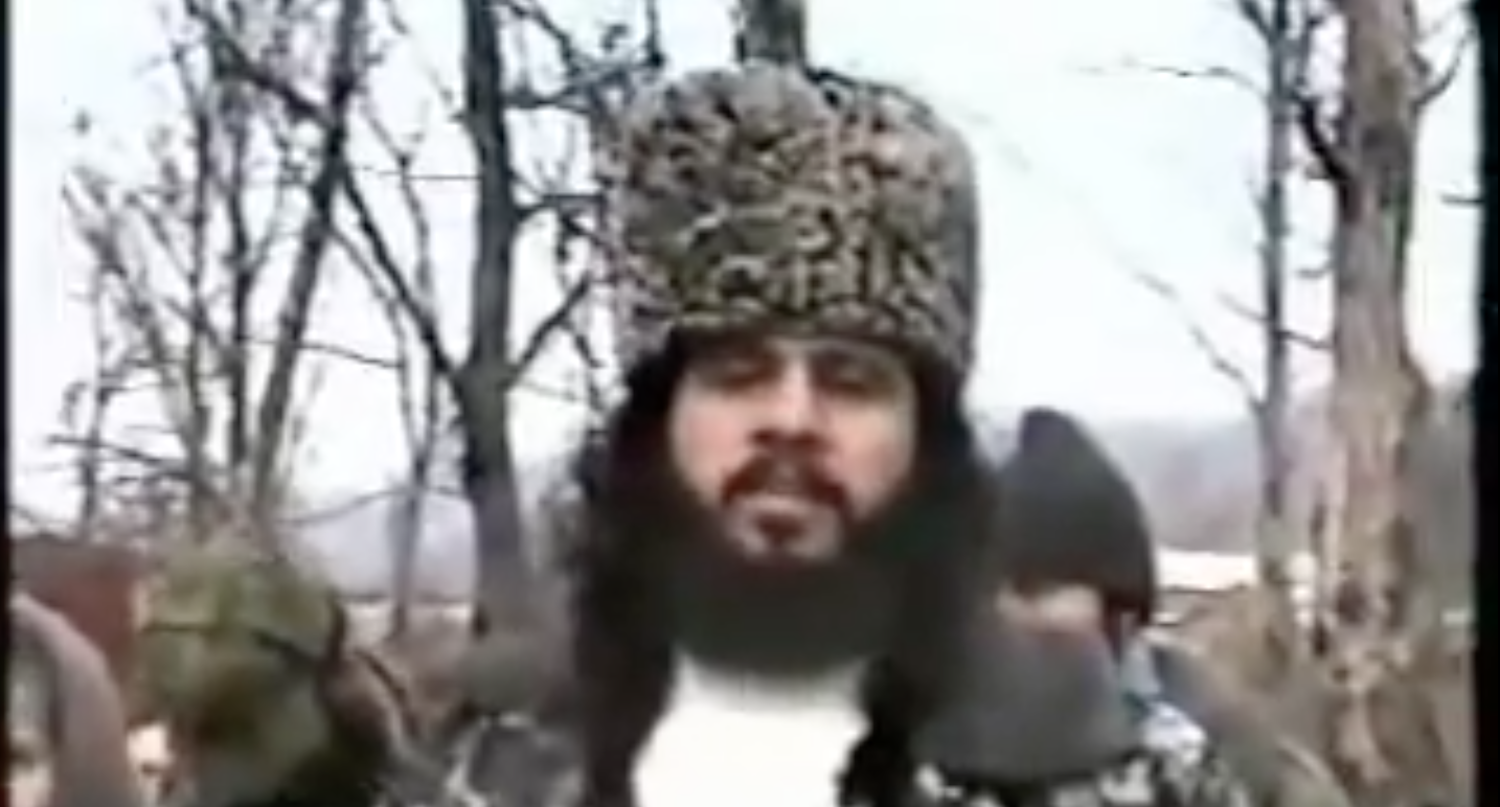 A screenshot from a video eulogizing the Chechen rebel leader Khattab. (YouTube)

In 2002, the Arab fighter and prominent Chechen rebel leader Khattab opened a letter that would be his last. It contained what is believed to have been a lethal dose of sarin or one of its derivatives, likely planted by Kremlin operatives.

Shortly after his death, the FSB announced that Khattab, whose real name was Samir Saleh Abdullah, had been killed in a “special operation.” 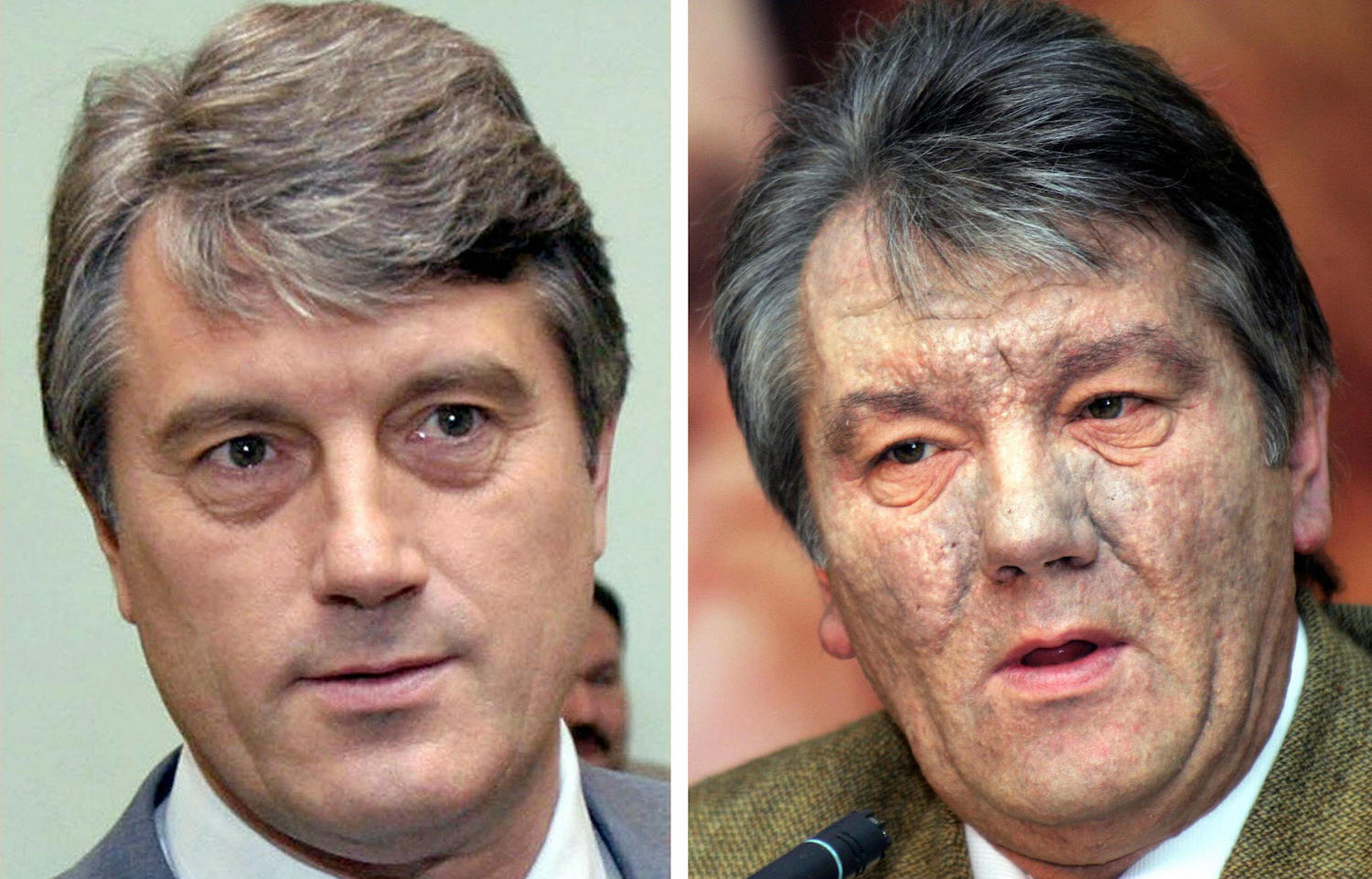 These two pictures show: Ukrainian opposition leader Viktor Yushchenko in Kiev on (left) July 6, 2004, and (right) Dec. 10, 2004. “There is no doubt about the fact that the disease has been caused by a case of poisoning by dioxin,” said Michael Zimpfer, the medical chief of Vienna’s Rudolfinerhaus clinic where Yushchenko was undergoing treatment. (STF/AFP/Getty Images)

In the heat of the 2004 presidential election in Ukraine, then-candidate Viktor Yushchenko suddenly fell ill and disappeared from the campaign trail. When he reappeared, his face was disfigured, the result of what his doctors described as a near-fatal dose of dioxin.

Yushchenko, a pro-Western candidate, would go on to win the highly contested election that culminated in widespread street protests in support of him, dubbed the Orange Revolution. While responsibility for his poisoning has never been definitively established, suspicion immediately fell on Russian and Ukrainian security services. 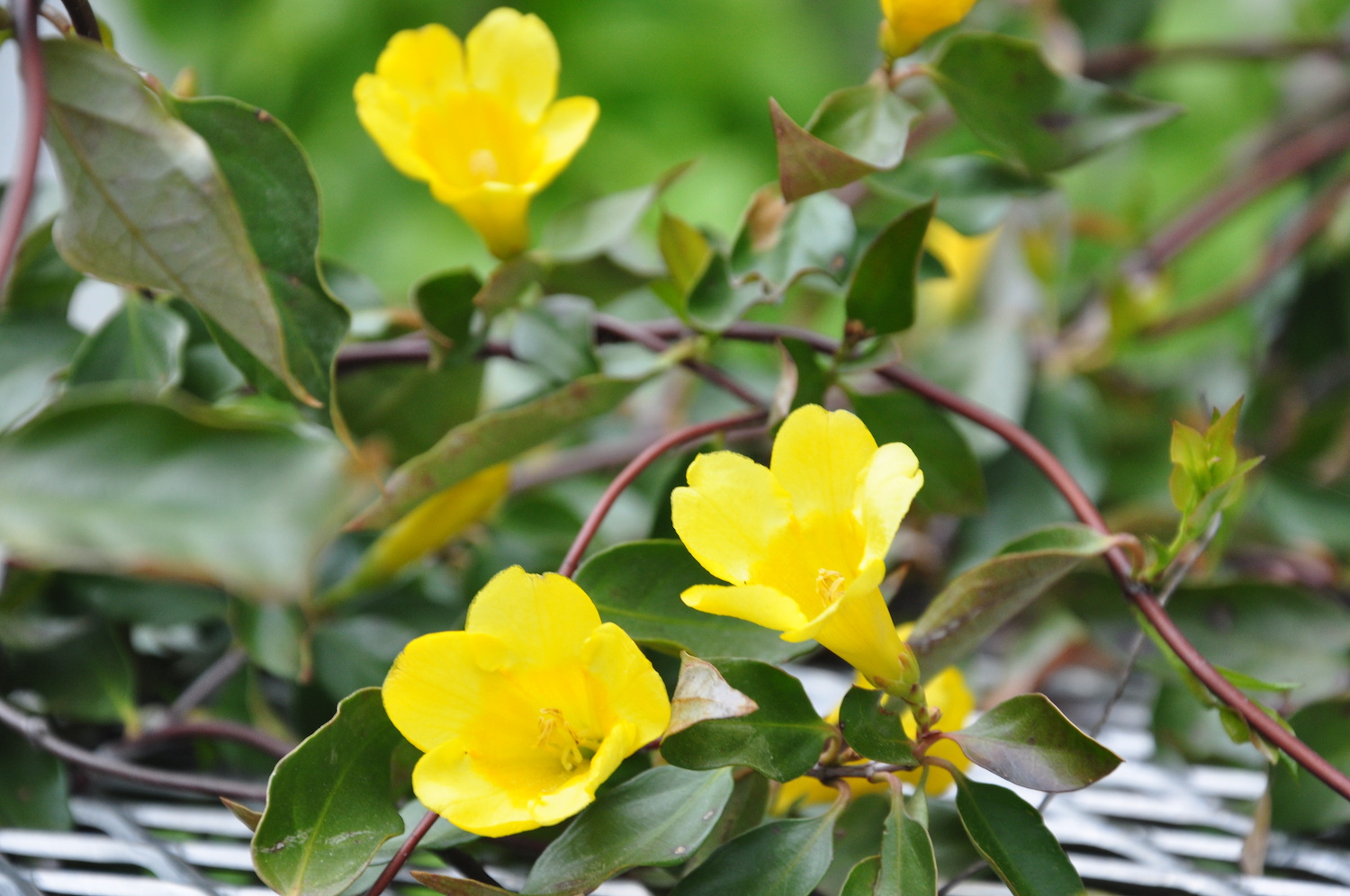 Investigators found trace amounts of the toxic variant of the gelsemium flower in the stomach of Alexander Perepilichny. (Proteinbiochemist/Flickr)

In November 2012, the businessman Alexander Perepilichny went for a run in his posh gated compound in London. After running about a hundred feet, he collapsed and died.

Perepilichny had handed over evidence to Swiss investigators probing allegations of massive fraud by Russian authorities on an investment fund, Hermitage, controlled by the American businessman Bill Browder.

While the exact circumstances of his death remain unclear, investigators discovered trace amounts of a rare, toxic flower, gelsemium, in Perepilichny’s stomach. 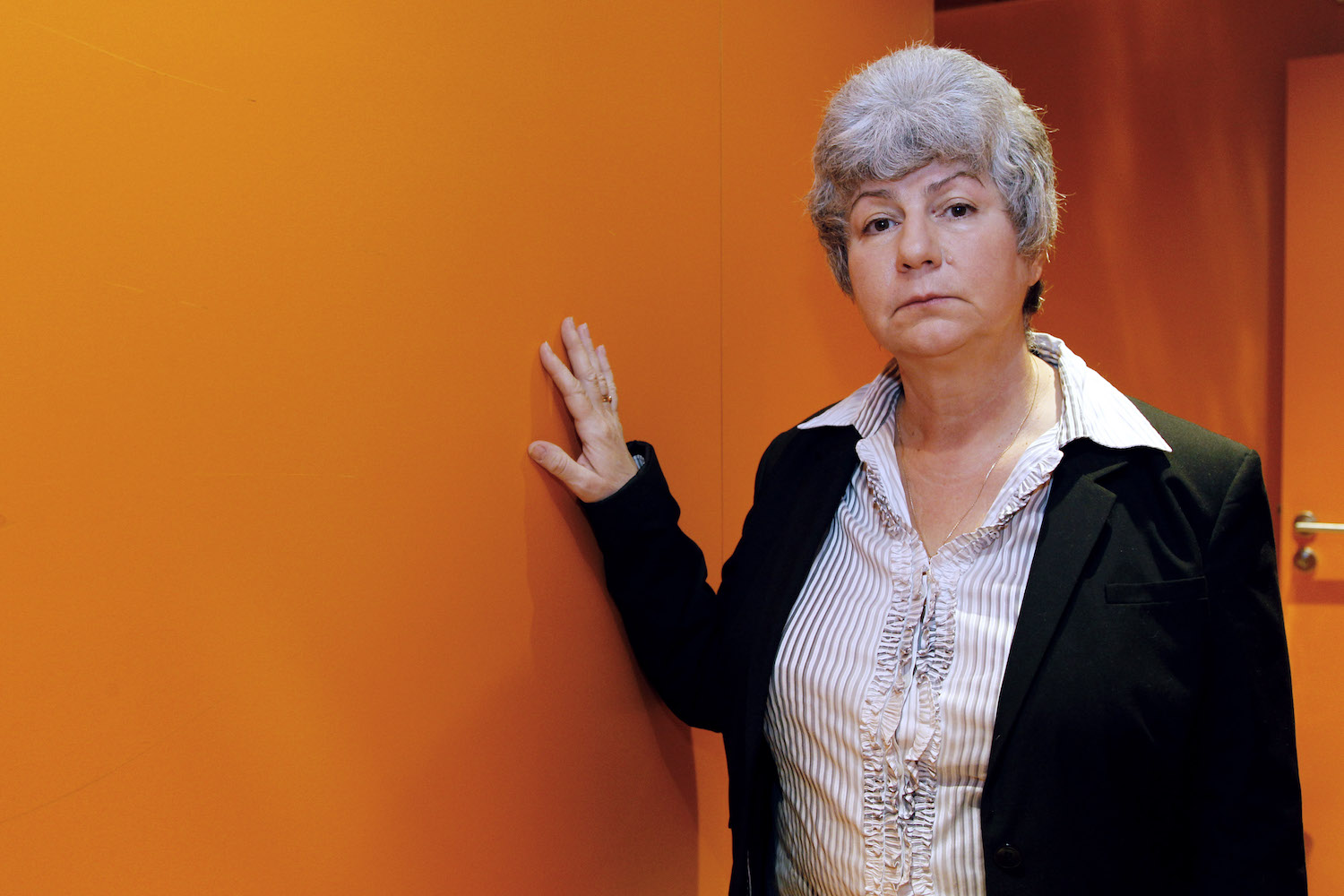 Karinna Moskalenko was due to return to Moscow in 2008 from Strasbourg to attend a trial examining the murder of one of her best-known clients — the journalist Anna Politkovskaya.

Moskalenko delayed her return to Moscow after feeling ill — with intense headaches and a strange giddiness. Moskalenko and her husband soon found liquid-metal pellets — likely mercury — under a seat of their car. 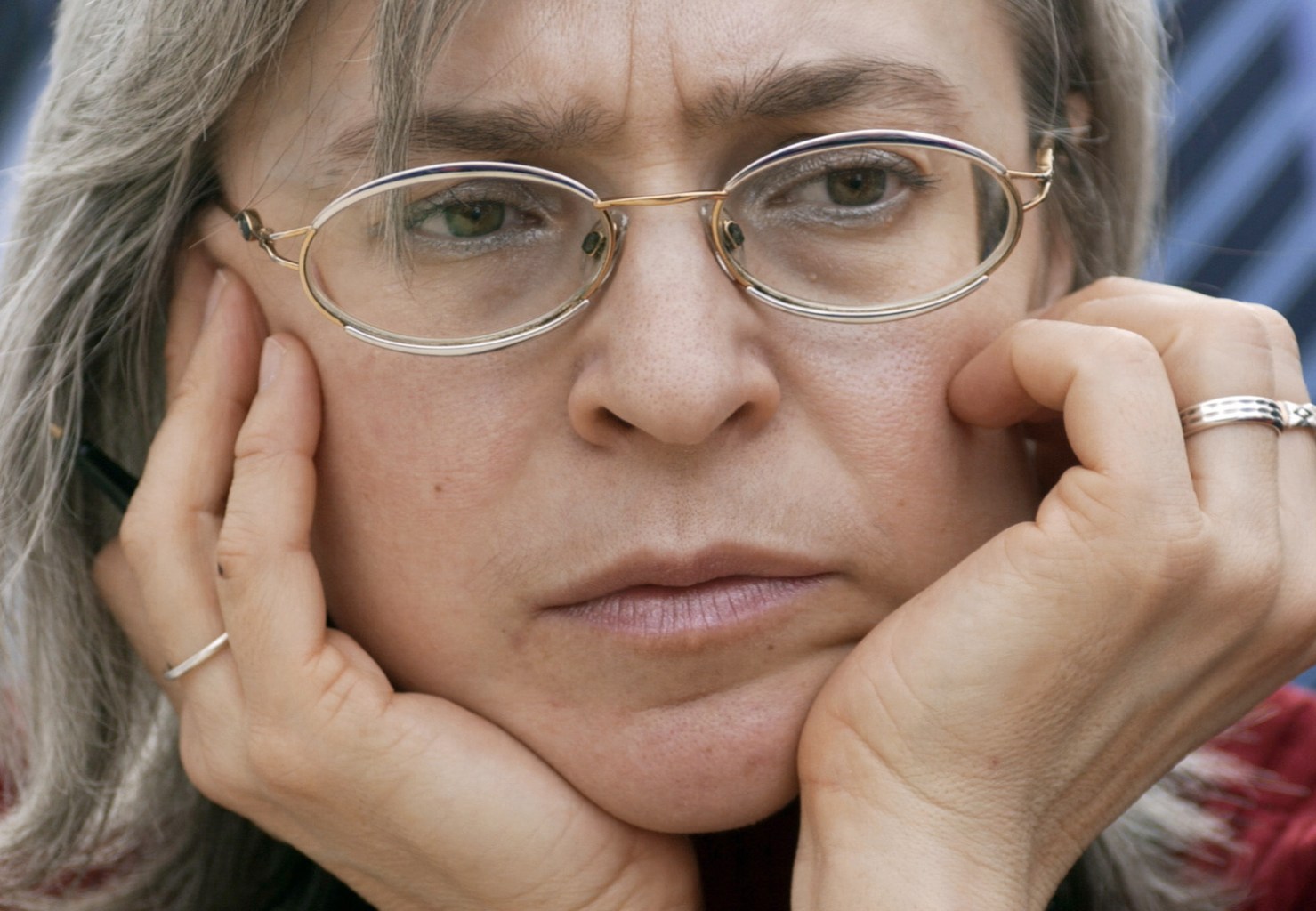 Before she was murdered in the elevator of her apartment in 2006, the journalist Anna Politkovskaya was targeted for assassination using poison.

Politkovskaya, who won countless enemies for her coverage of the Russian invasion of Chechnya, was attempting to travel to North Ossetia in 2004 to help negotiate during a school siege in Beslan. She boarded a flight, but promptly fell ill after drinking some tea that she believed contained poison.

In a 2004 article for the Guardian, she described the moment she woke up in the hospital to a nurse leaning over her in the hospital. “My dear, they tried to poison you,” the nurse whispered.

An Assassination Could Be Just What Kosovo Needed

A tragic death could spark a lasting peace in the Balkans’ most restive region.

Another assasination in Beirut