Is Trump Ready to Dump Pakistan?

As U.S. ambassador to Pakistan more than a decade ago, Ryan Crocker spent much of his time trying to convince the government in Islamabad to take action against militants moving freely inside the country and plotting attacks on U.S. forces in neighboring Afghanistan.

In 2007, toward the end of his three-year tenure, Crocker spoke with the head of the Pakistani army, Gen. Ashfaq Parvez Kayani, who explained why Islamabad was not ready to reverse course.

The United States had a short attention span, the general said, according to Crocker. “How long are you staying this time? Because you come and you go,” Kayani told Crocker.

“If you think we are going to turn the Taliban and Haqqanis and others into mortal enemies of ours and watch you walk out the door, you are completely crazy. Are we hedging our bets? You bet we are.”

The two men’s exchange captures the mutual frustration and misunderstanding that have plagued relations between Pakistan and the United States, nominal allies with little strategic common ground. Previous U.S. presidents tried and failed to persuade Pakistan to rein in the Taliban and the Haqqani militants on the Afghan border. Now President Donald Trump faces the same challenge, and officials inside his administration are debating how far to press Pakistan.

Despite a suspension of $1.3 billion in U.S. military aid in January, Pakistan has failed to take decisive action to crack down on Afghan militants on its territory, either by arresting known militants or restricting the flow of fighters and weapons across its border with Afghanistan, U.S. officials said. “What I would say is they’ve done the bare minimum to appear responsive to our requests,” a senior administration official told reporters this month.

Amid growing frustration on Capitol Hill, Trump’s deputies are weighing unprecedented political penalties on Islamabad for harboring Afghan militants waging war on the U.S.-backed government in Afghanistan. The options under consideration include revoking Pakistan’s status as a major non-NATO ally, permanently cutting off the U.S. military aid that was suspended two months ago, and even imposing visa bans or other sanctions on individuals in the Pakistani government deemed responsible for providing support to the militants.

Yet the Trump White House is now engaged in an internal debate about the tempo and scale of possible punitive steps against Pakistan, echoing arguments under previous U.S. presidents. Some officials and military officers favor a hard line with Pakistan, maintaining that years of aid and accommodation have produced little in return. But other voices in the administration worry about alienating a nuclear-armed country of 200 million people bordering China.

The appointment last week of a fervent hawk as national security advisor, John Bolton, and the nomination of another for secretary of state, Mike Pompeo, could tilt the discussion in favor of tougher measures against Islamabad.

The suspension of military aid in January is not the first time the United States has withheld security funding to Pakistan since the 9/11 attacks. But unlike previous administrations, Trump’s deputies are looking at permanently cutting off the annual flow of military aid this year, which could put a strain on Pakistan’s defense budget and deprive it of coveted U.S. military hardware.

The White House is also weighing even more drastic measures to include visa bans or other punitive measures against individual members of the Pakistani government, military, or ISI intelligence service suspected of allowing the Taliban and Haqqani militants to operate from sanctuaries inside Pakistan, current and former officials told Foreign Policy. “We are prepared to do whatever is necessary to protect U.S. personnel and interests in the region,” the senior administration official, who spoke on condition of anonymity, told reporters last week.

If carried out, the combined measures would represent a clear rebuke of Pakistan and signal the unraveling of an uneasy military alliance that was born during the Cold War and renewed in the aftermath of the 9/11 attacks.

Former Presidents Barack Obama and George W. Bush also pressed Pakistan to take action against the Taliban and their Haqqani comrades but stopped short of a full-blown confrontation. Under previous administrations, officials were reluctant to push too far, fearing Pakistan could sabotage any peace negotiation in Afghanistan, cut off supply lines to U.S.-led forces there, or that American pressure would embolden jihadis seeking to seize control of the country’s nuclear weapons.

Two lethal attacks in Kabul in January claimed by the Taliban, occurring only days after the suspension of U.S. aid was announced and after a tweet by Trump castigating Pakistan, have added urgency to the debate. For critics of Islamabad, the attacks — including a suicide bombing that claimed the lives of 95 people — represented a familiar pattern from years past: Washington threatens to punish Pakistan, and its proxies in Afghanistan retaliate.

The attacks were “ISI-directed retaliation,” one former CIA officer said.

The political climate for Pakistan on Capitol Hill — and in other Western capitals — has also grown increasingly hostile. As recently as 2009, members of Congress were ready to back multiyear, multibillion-dollar commitments for security aid to Pakistan. But those days are over, as both parties have run out of patience with Islamabad.

“Pakistan is at risk of miscalculating the level of frustration both in Washington and other foreign governments,” said a senior State Department official. “In the past, Pakistan has sought to take the minimum action required to placate U.S. concerns without fundamentally altering their policy and strategy,” said the official, who was not authorized to speak on the record.

In addition to unilateral steps, Washington last month successfully lobbied an international money-laundering watchdog to place Pakistan on a terrorist financing watchlist. The move set off alarm bells in Islamabad, which had counted on China and Saudi Arabia to defeat the measure. Pakistan, however, denied it was giving shelter to militant leaders plotting attacks on U.S. forces and the Afghan government.

“There is today no organized presence of any Afghan Taliban or Haqqanis inside Pakistan,” Aizaz Ahmad Chaudhry, the Pakistani ambassador to the United States, told FP in an email.

“Pakistan remains committed to working with the United States to bring peace to Afghanistan. We do believe, however, that blaming allies does not serve our shared objectives of achieving lasting regional peace and stability,” Chaudhry said.

Western intelligence agencies, however, insist that Pakistan’s spy agency, the Inter-Services Intelligence, or ISI, has long served as a vital lifeline to the Afghan Taliban and their partners in the Haqqani network. With arms, cash, and advice, the ISI helped the Taliban come to power during Afghanistan’s civil war in the 1990s. And after the Taliban regime was toppled with the U.S.-led invasion in 2001, it maintained support for the militants’ insurgency against the internationally recognized government in Kabul.

With a singular focus on archfoe India, Pakistan sees a friendly partner in Afghanistan as a way of countering Indian influence in its backyard and providing “strategic depth” in the event of an all-out war. While Islamabad denies that it lends any assistance to the militants, privately Pakistani intelligence and military officers have acknowledged their links to the Taliban as a hedge against the perceived threat posed by India, former U.S. officials said. 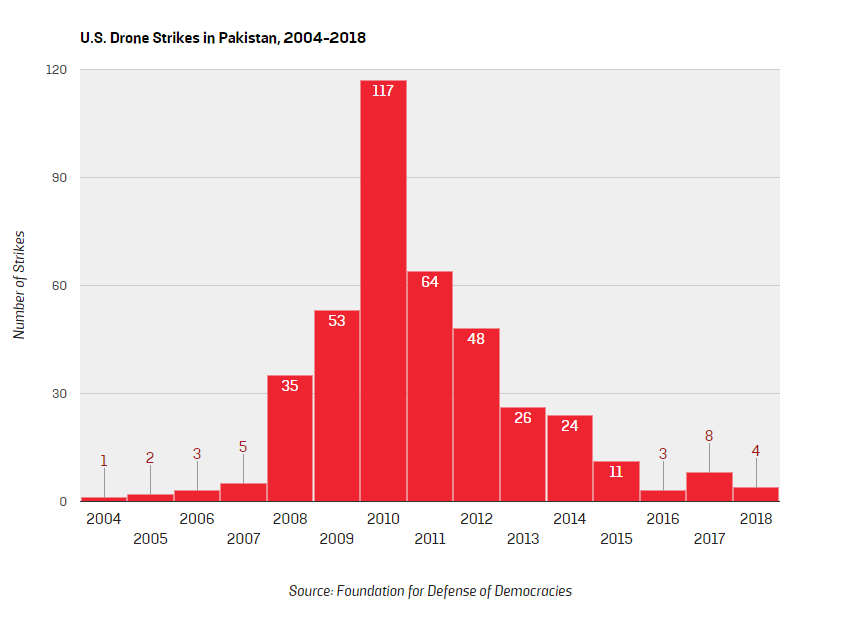 Andrew Liepman, who worked for 30 years at the CIA and served as the deputy director of the National Counterterrorism Center, said Pakistan provided invaluable help in hunting down al Qaeda leaders but was also behind the resurgence of insurgents attacking U.S. forces in Afghanistan.

“The substantial progress we made in dismantling the al Qaeda network could not have been accomplished without help from ISI,” said Liepman, now a senior analyst at Rand Corp. “At the same time, bad things happened. Haqqani grew and became the most effective and lethal force against us in Afghanistan, with the direct assistance of the Pakistan government.”

In discussions with his Pakistani counterparts, there was a “huge cloud in the air,” he said. “There was an undercurrent — both sides distrusted the other pretty deeply.”

Some former diplomats worry that piling pressure on Pakistan — through sanctions or even unilateral drone strikes against militants — could have unintended consequences. Given its history with the Taliban, Pakistan could effectively wreck any prospect of peace talks. And with the country’s strategic location and nuclear arsenal, a confrontation could risk a backlash by extremists and even a nightmare scenario where jihadis get hold of Pakistan’s nuclear weapons.

However, resentment of Pakistan tends to runs deep among U.S. military and intelligence officers who have deployed to Afghanistan, including Gen. John Nicholson, the commander of U.S.-led forces in Afghanistan.

Lisa Curtis, a senior U.S. official on the National Security Council helping to shape policy on Pakistan, has long argued for a more hawkish line on the country. Before she took the job, Curtis co-authored a policy paper calling for stepping up political pressure on Pakistan, including suspending military aid. Her paper also proposed retaining the option of unilateral military action and drone strikes against militant leaders operating from safe havens inside the country.

A little over a year ago, the Trump administration resumed CIA drone strikes on Afghan Taliban and Haqqani extremists in Pakistan after a 10-month lull. The first raid struck a motorcycle near the Afghan border, reportedly killing an Afghan Taliban leader. But the tempo has been sporadic, with 12 bombing raids since Trump took office, according to a tally by the Long War Journal.

Under Obama, the drone strikes in Pakistan, which targeted mainly al Qaeda leaders, reached a peak in 2010 with an estimated 117 bombing raids. As al Qaeda’s core leadership was weakened and dispersed, and as a large U.S. force began to draw down in Afghanistan, the strikes — which were carried out with Pakistan’s quiet cooperation — dwindled and then tapered off completely in his final months as president.

It remains unclear if Trump will opt for more drone raids if Pakistan fails to clamp down on the militant sanctuaries. For the moment, the White House is ready to see if political measures alter Pakistan’s calculus, though there is no clear timetable. The administration official who spoke to reporters earlier this month did not specify how and when the United States would respond to Pakistan’s inaction.

As distrust between Washington and Islamabad grows, America’s ties with Pakistan’s rival, India, continue to warm. The United States sees India as a country increasingly aligned with Washington’s goals and that shares its concerns about China’s military buildup. The two countries — once at odds during the Cold War — have stepped up defense cooperation, and their militaries now hold numerous joint exercises.

An outspoken critic of Pakistan’s military, Husain Haqqani, who served as the country’s ambassador to the United States from 2008 to 2011, portrays the U.S.-Pakistani relationship as a dysfunctional and unsustainable marriage in his book Magnificent Delusions. The two countries have never really shared the same interests, Haqqani argues, and it’s time to face that harsh reality.

“The alliance with Pakistan no longer makes sense for the United States because it undercuts U.S. policy in Afghanistan as well as its effort to build a strategic relationship with India against China,” Haqqani told FP. “It doesn’t make sense for Pakistan either.”