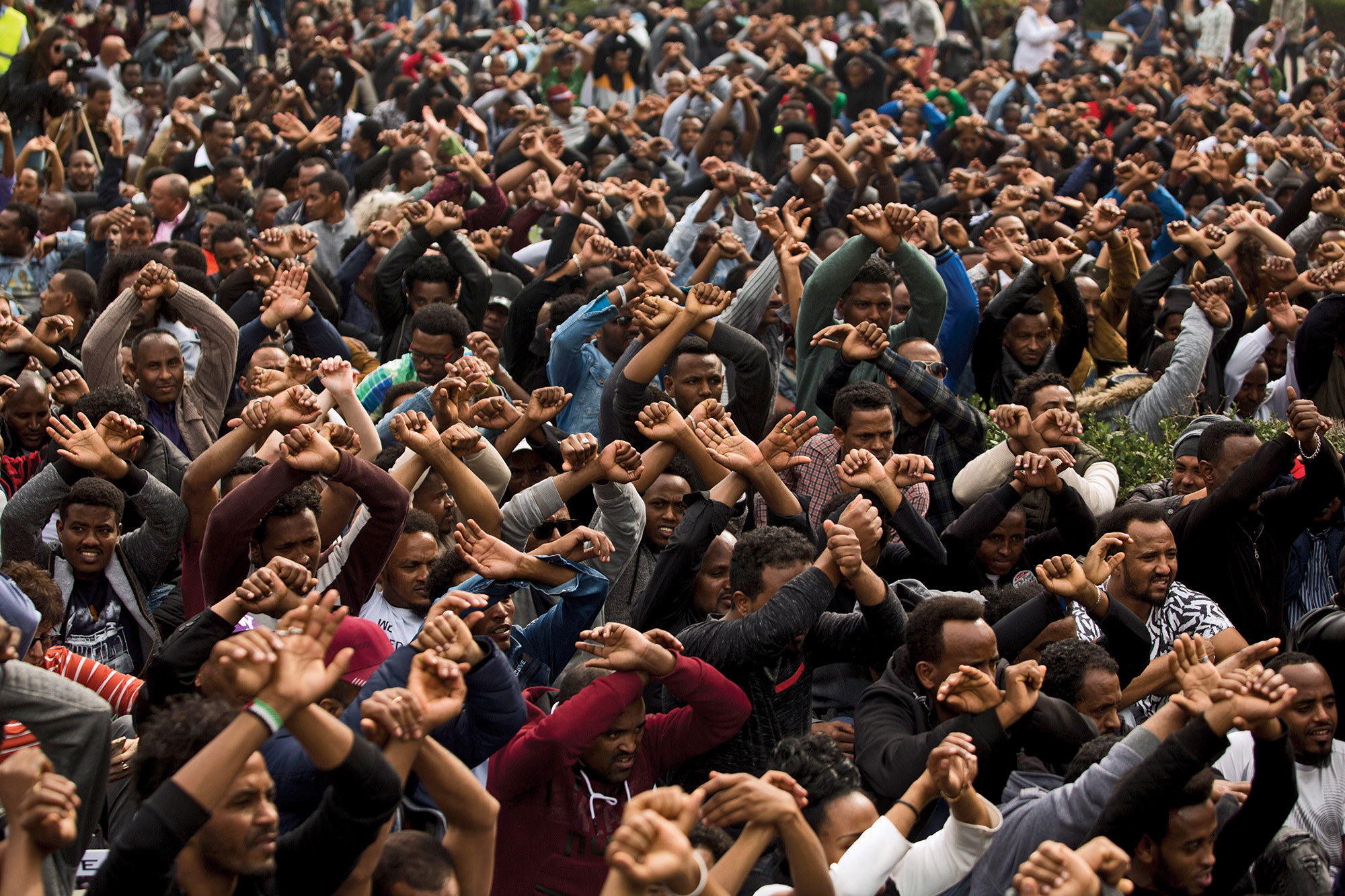 Asylum-seekers demonstrate against the proposed deportations in front of the Rwandan Embassy in Herzliya, a seaside town north of Tel Aviv, on Feb. 7.

For Once We Were Strangers

In Israel, thousands of Eritrean and Sudanese asylum-seekers are stuck in limbo. Photographer Kobi Wolf documents a national crisis.

In January, Israeli Prime Minister Benjamin Netanyahu gave the thousands of primarily Eritrean and Sudanese asylum-seekers living in Israel an ultimatum: Take $3,500 and leave for a third country, reportedly Rwanda or Uganda, or face incarceration and deportation. In the wake of his announcement, tens of thousands of Israelis and African migrants took to the streets of Israel in protest. Holocaust survivors and rabbis compared the plight of the asylum-seekers to that of the Jews who had unsuccessfully begged countries around the world to take them in as they fled the Nazis before and during World War II. Some protesters implored their fellow citizens to remember the biblical injunction to welcome the stranger. A group of rabbis called on Israelis to hide asylum-seekers in their homes. Hundreds of doctors, nurses, academics, human rights workers, and pilots called on the government to reconsider its plan.

On April 2, Netanyahu suddenly announced a brokered agreement with the Office of the U.N. High Commissioner for Refugees (UNHCR) regarding the asylum-seekers: 16,000 were to remain in Israel; 16,000 more would be sent away — but to the West, rather than back to Africa. Then, less than 24 hours later, the Israeli prime minister announced the agreement was void.

The whiplash left the migrants without resolution. Between 2006 and 2013, more than 64,000 asylum-seekers, most hailing from Eritrea or Sudan, traversed the Sinai desert and crossed the Egyptian border into Israel. Since then, some 20,000 have departed or been deported. (A border wall completed in 2013 abruptly halted further crossings.) Now, the remaining African asylum-seekers face ugly options. 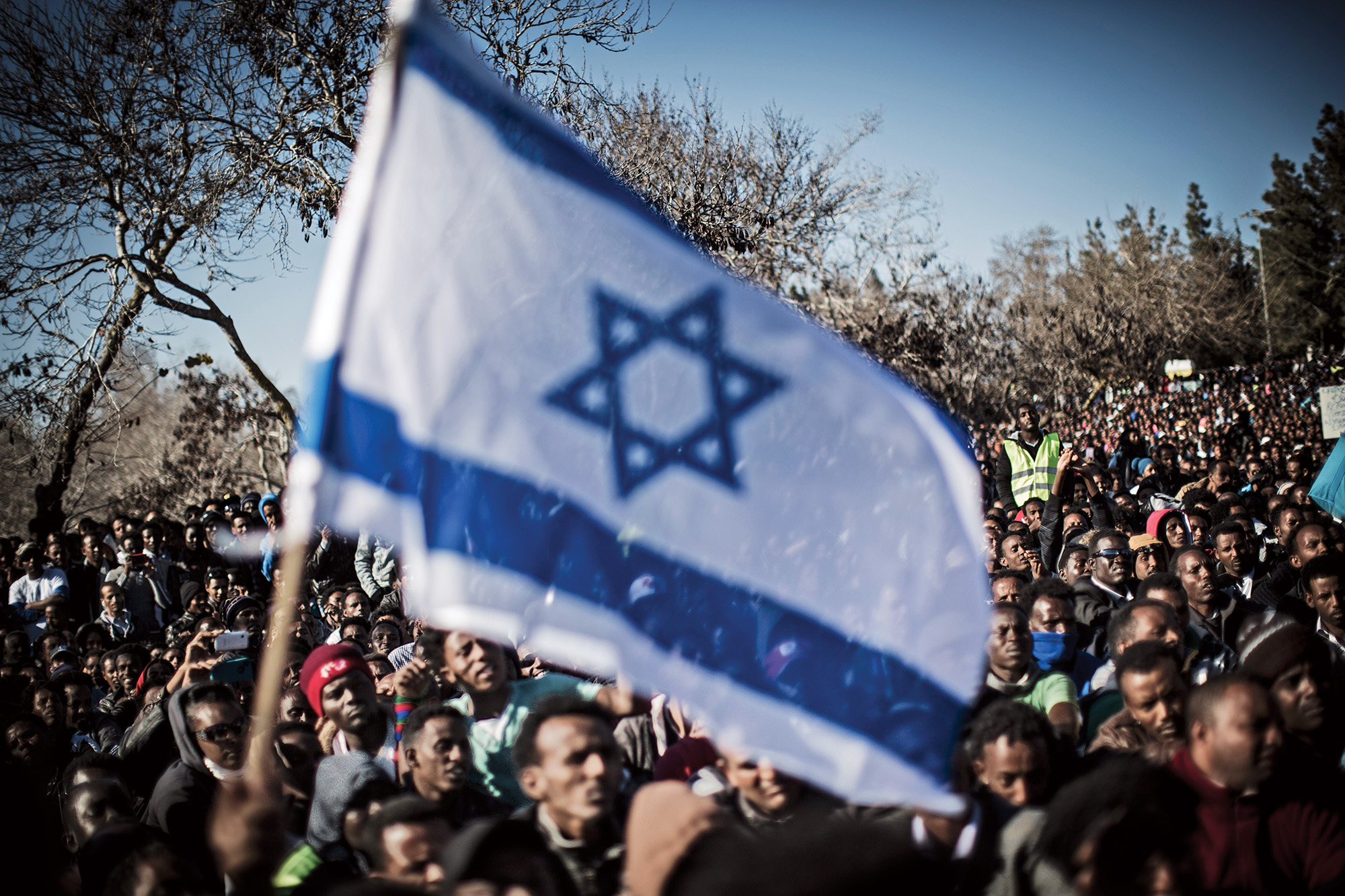 A crowd gathers at the Knesset, Israel’s parliament, in Jerusalem to protest the detention of migrants on Jan. 8, 2014. Many Israelis first became aware of the African migrant crisis several years ago, explains Asaf Weitzen, a human rights lawyer specializing in refugee law. “Ten thousand refugees from Eritrea and [Sudan] arrived by buses,” Wolf recalls of this demonstration. “They chanted: ‘We need protection,’ ‘We are not criminals, we are refugees.’”


Over the last decade, Israeli photographer Kobi Wolf has recorded images of refugees around the world. Since 2014, he has also focused on his own country, documenting a crisis of identity as much as immigration.

The issue has divided Wolf’s fellow citizens. Right-wing protesters have taken to the streets, though in fewer numbers than those who support the asylum-seekers. Netanyahu’s supporters on the right reportedly urged him to void his decision to allow some of the asylum-seekers to stay. A group of U.N. human rights experts had condemned Netanyahu’s initial decision to deport, citing the dangers the migrants will face if they return to Africa, including torture and other serious human rights violations. Following Israel’s decision to walk away from the agreement, the UNHCR released an official statement of “disappointment.”

Many of the remaining migrants live in a working-class neighborhood in south Tel Aviv. Though trapped in limbo, the asylum-seekers continue to go to work and school while they await their fate. “The young ones were born in Israel. They speak Hebrew. They know the culture,” Wolf says. “It is painful, you know, to send them out — it is crazy really. They are Israelis.” 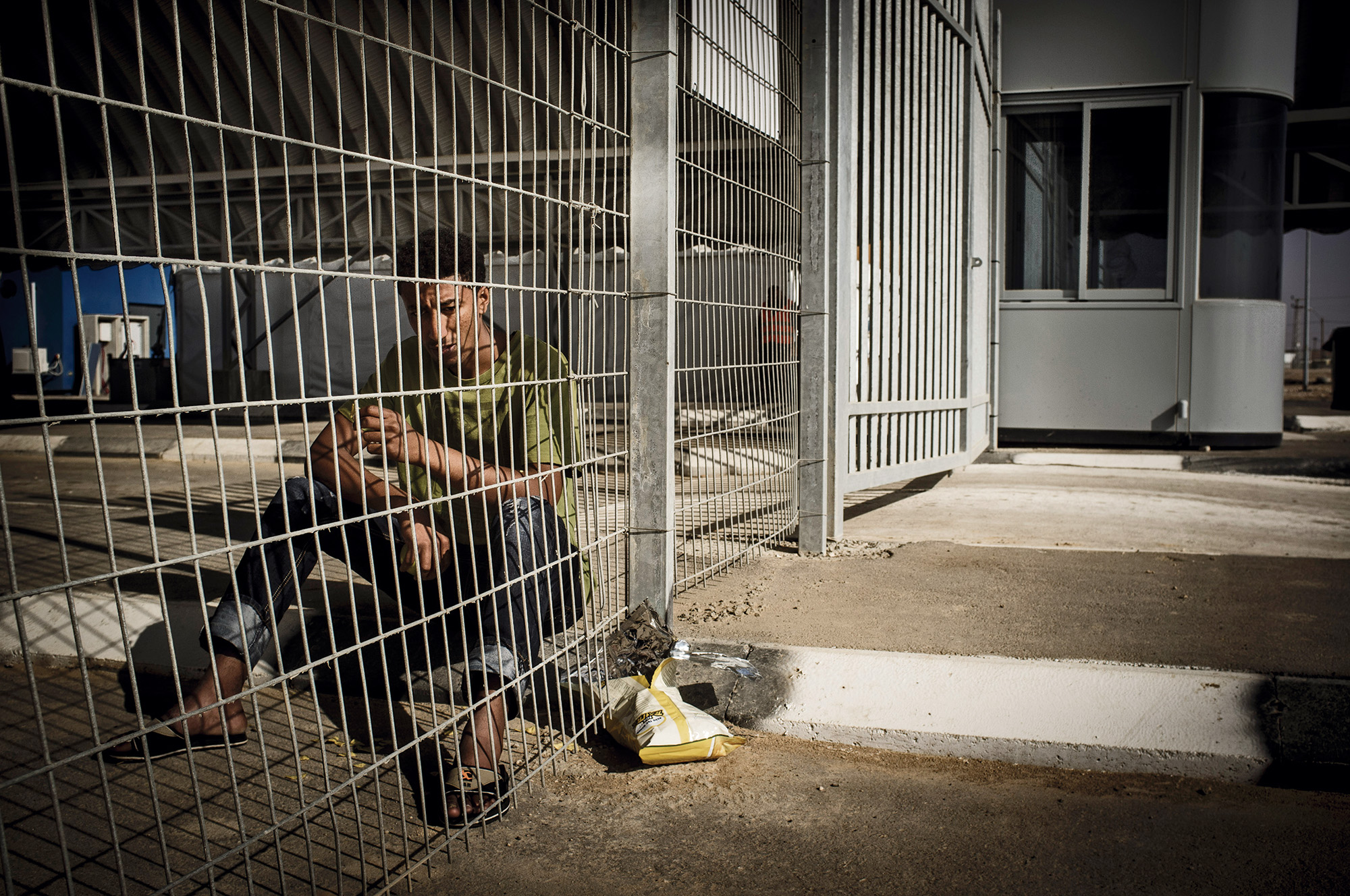 The Holot detention center in the Negev desert opened in late 2013 to house migrants who entered Israel illegally from Africa. This man, photographed on Jan. 4, 2014, was technically free to leave the facility during the day because Holot is considered an open detention center — but the nearest city, Beersheba, is an hour’s drive away. The center is now slated for closure. 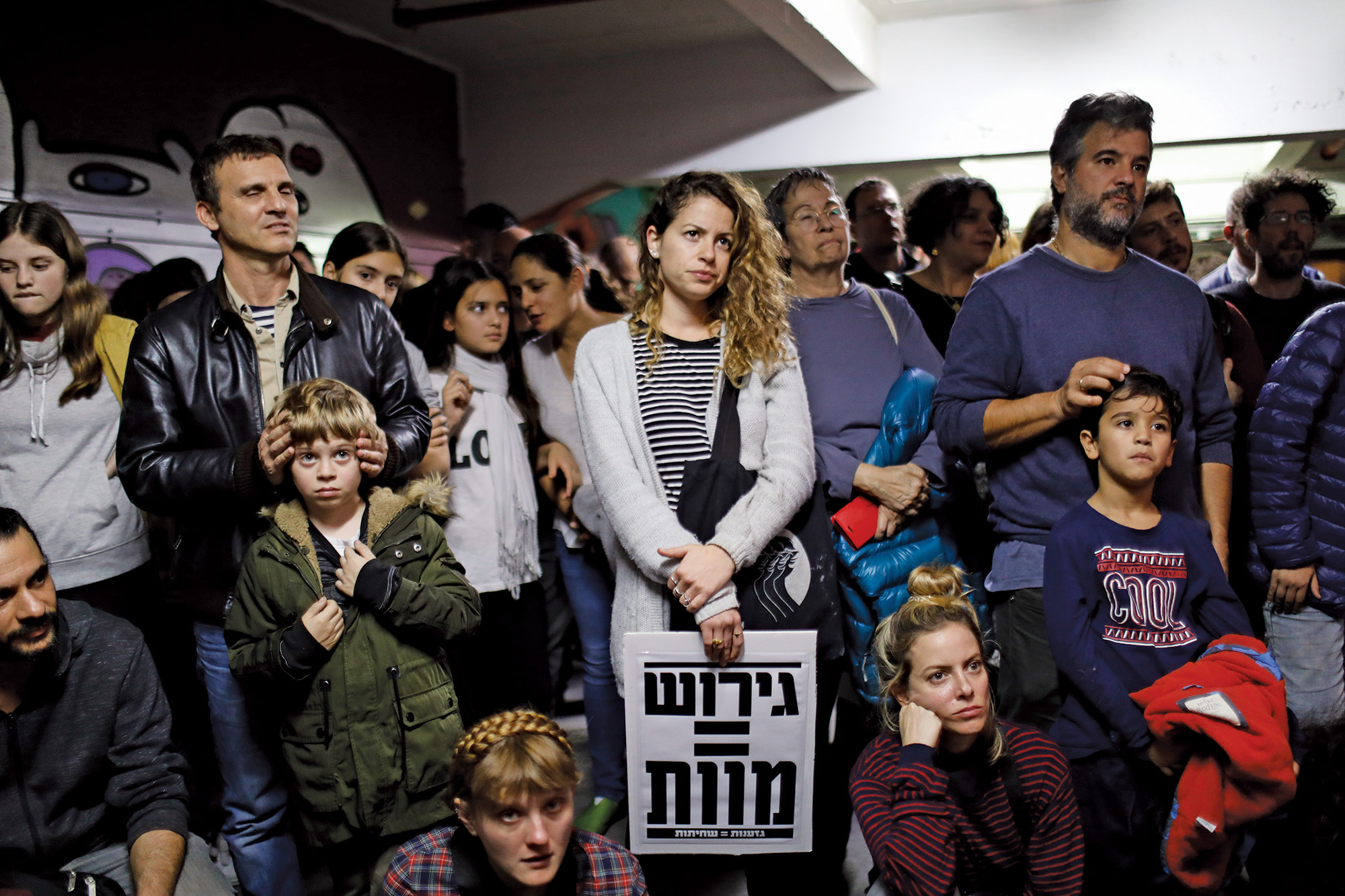 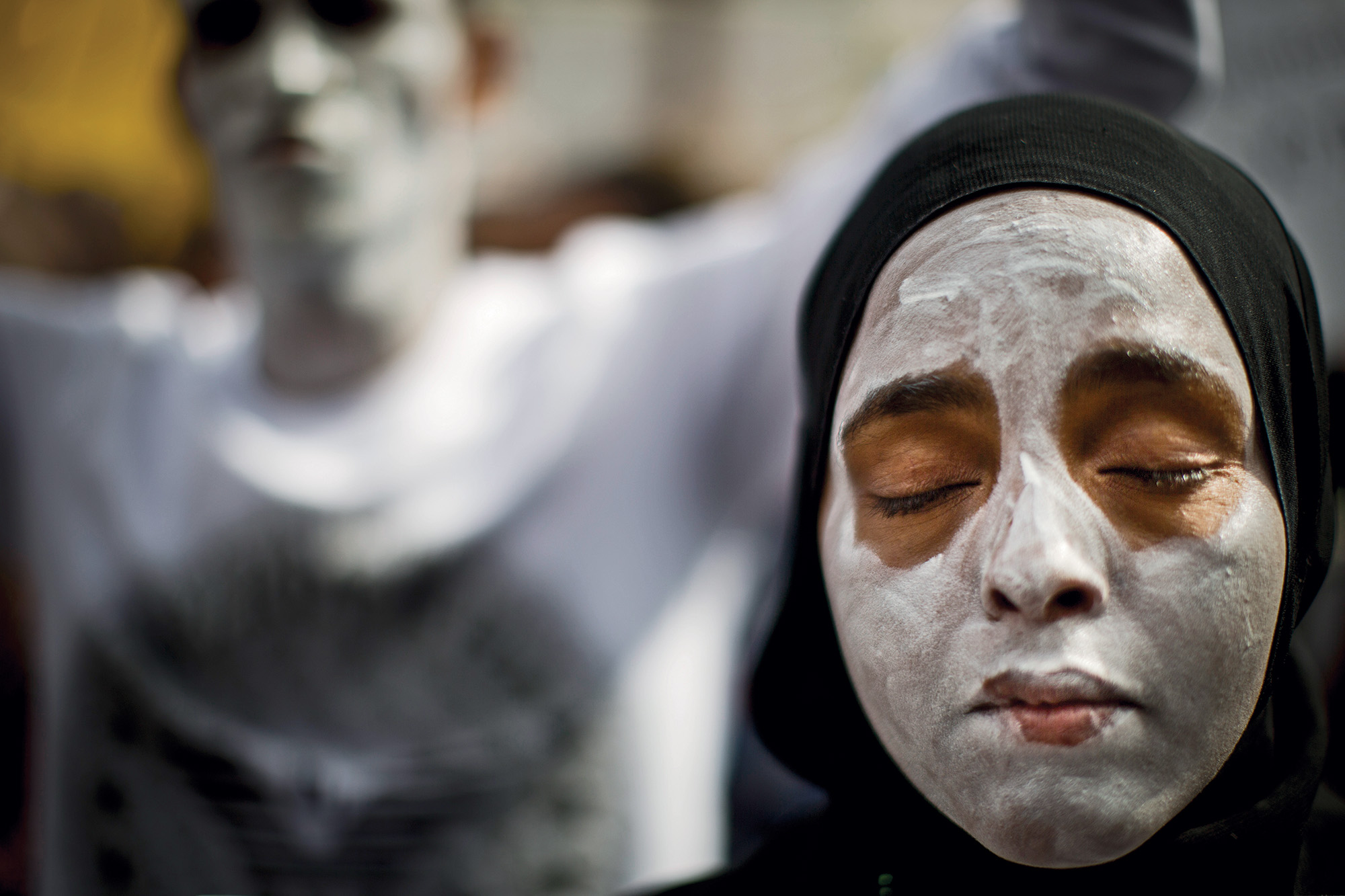 Asylum-seekers at a demonstration in front of the Rwandan Embassy in Herzliya on Feb. 7. 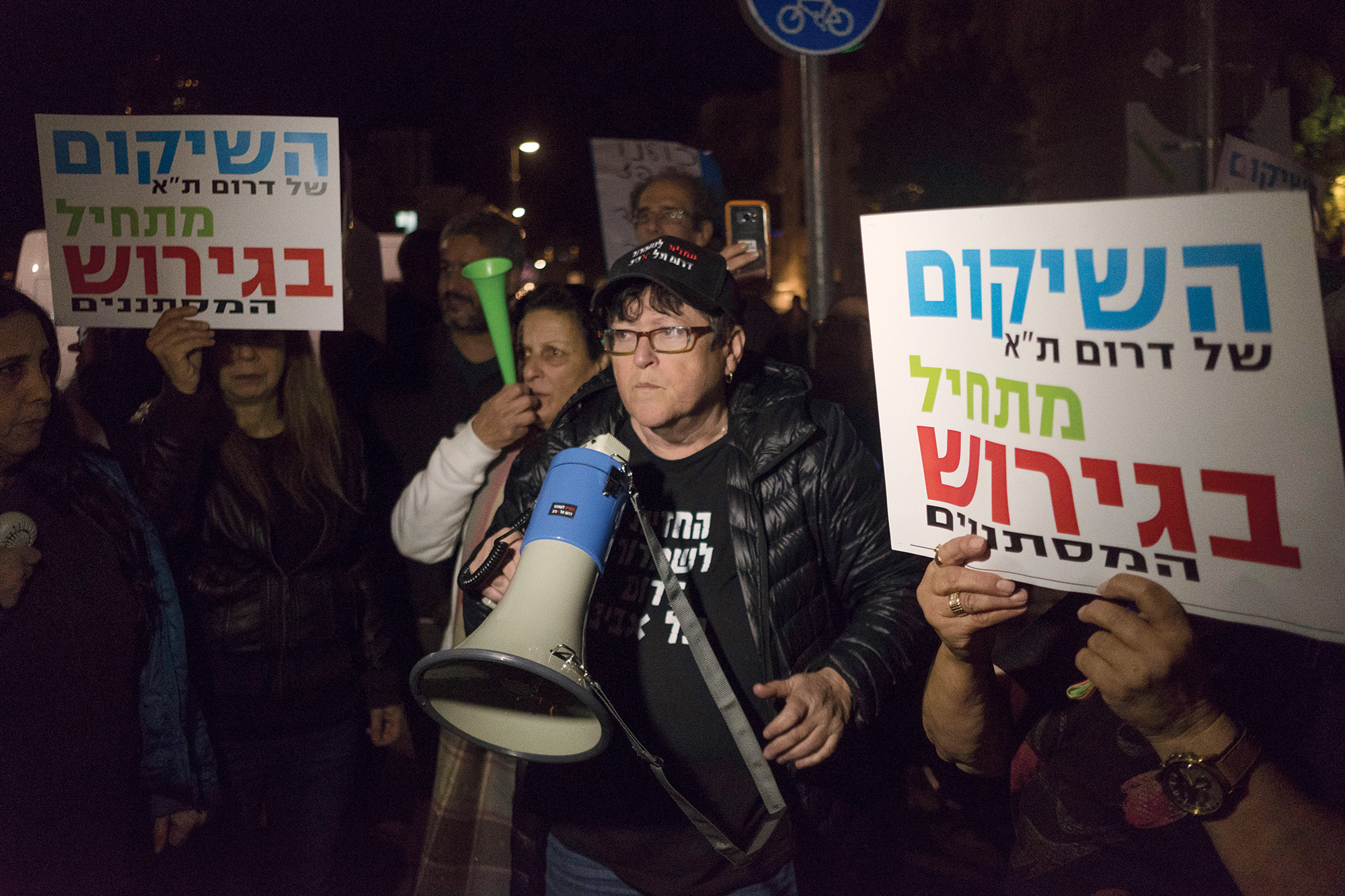 Sheffi Paz, an activist leader campaigning to remove the asylum-seekers, photographed on Jan. 9. The signs around her read: “The rehabilitation of south Tel Aviv begins with the expulsion of the infiltrators.” 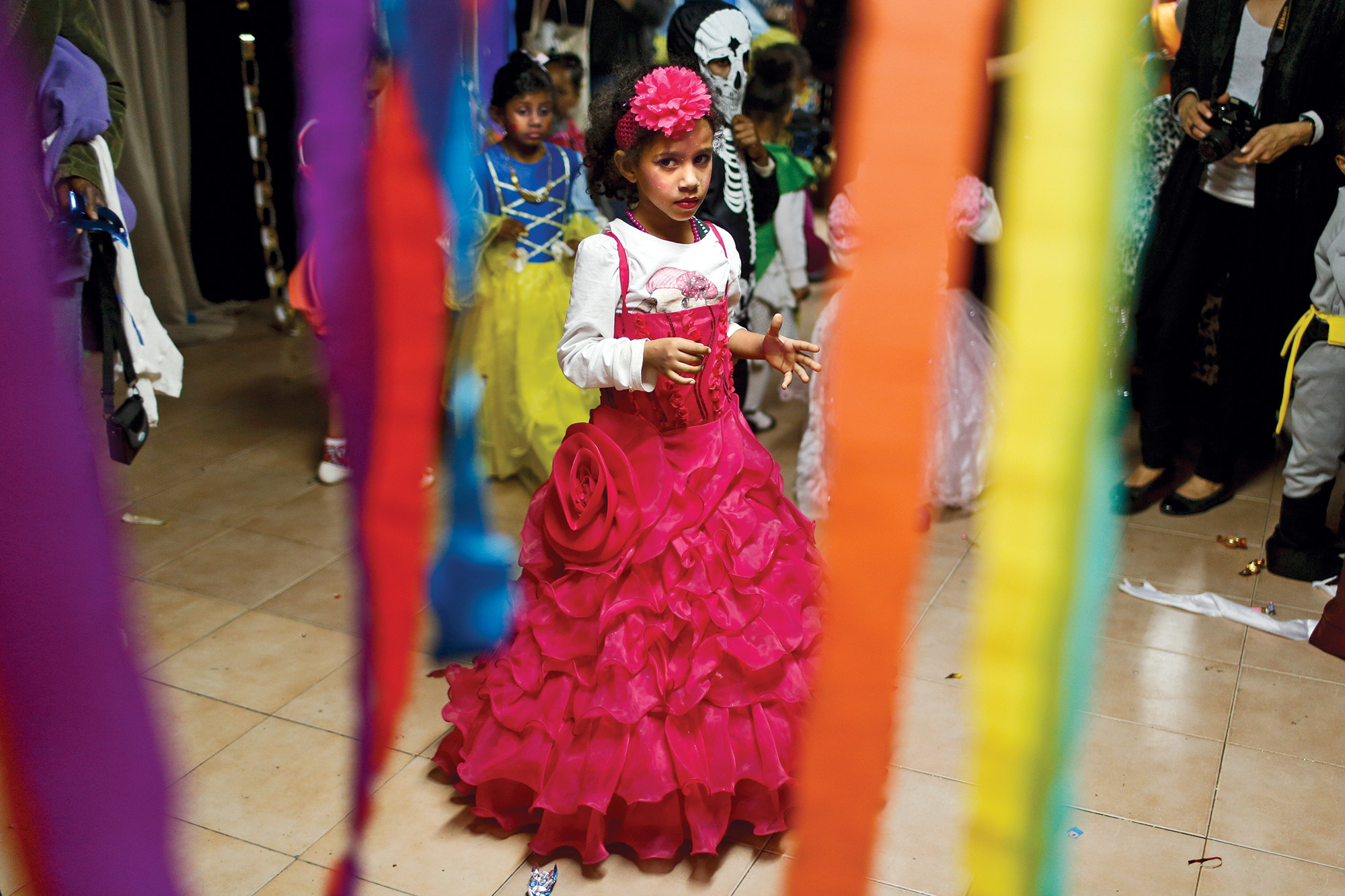 A refugee girl participates in the holiday of Purim, which celebrates a Jewish triumph in ancient Persia, on March 5, 2015. Many of the migrant children are integrated into Israeli life. They go to Israeli schools, and some learn Arabic, Tigrinya (which is spoken in Eritrea), or other African languages, as well as Hebrew. 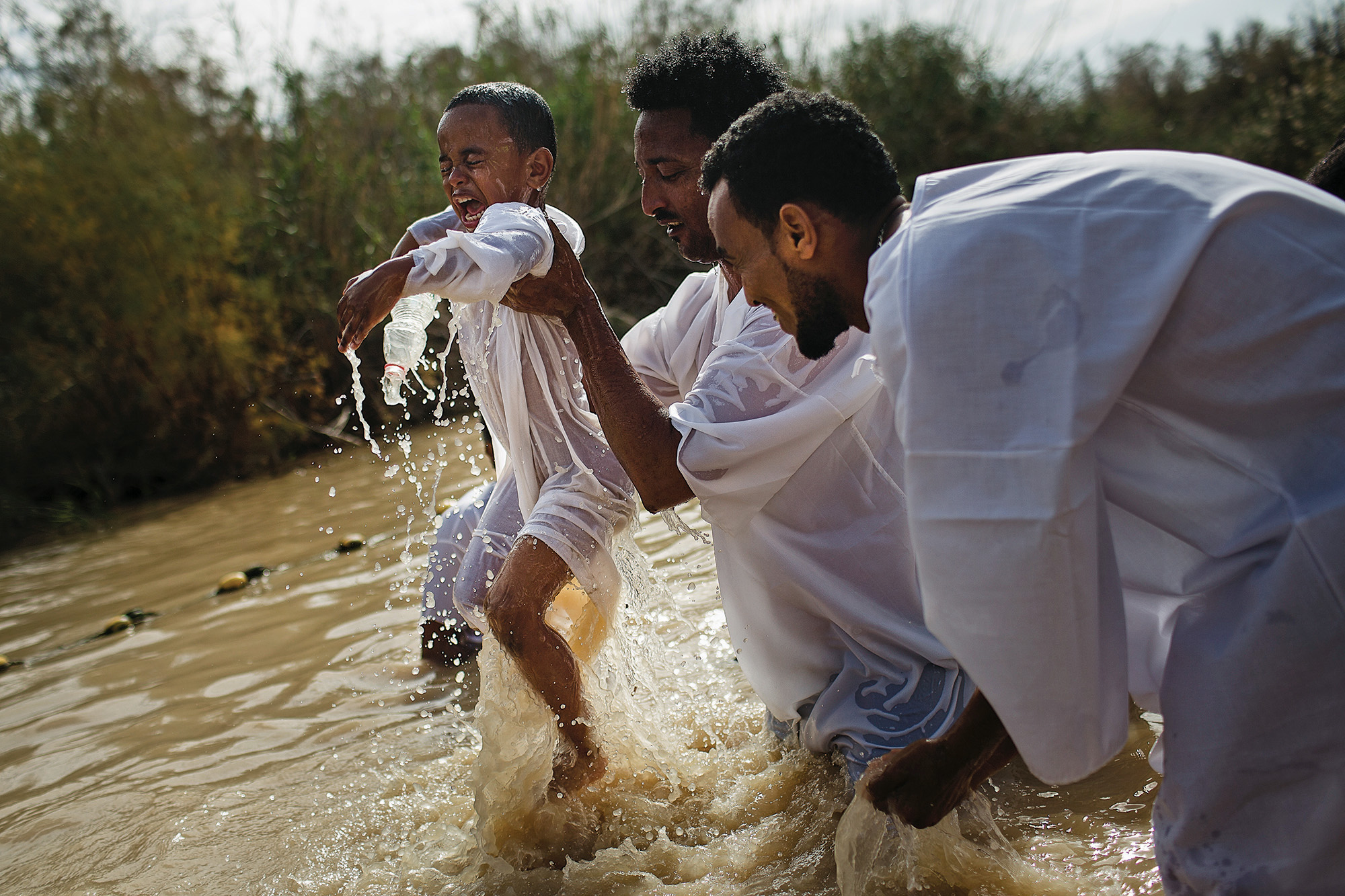 Eritrean pilgrims perform a baptism during Epiphany celebrations at the Qasr al-Yahud baptism site in the West Bank, near the city of Jericho, on Jan. 20. Epiphany celebrates the baptism of Jesus, which some Christians believe occurred at this spot. 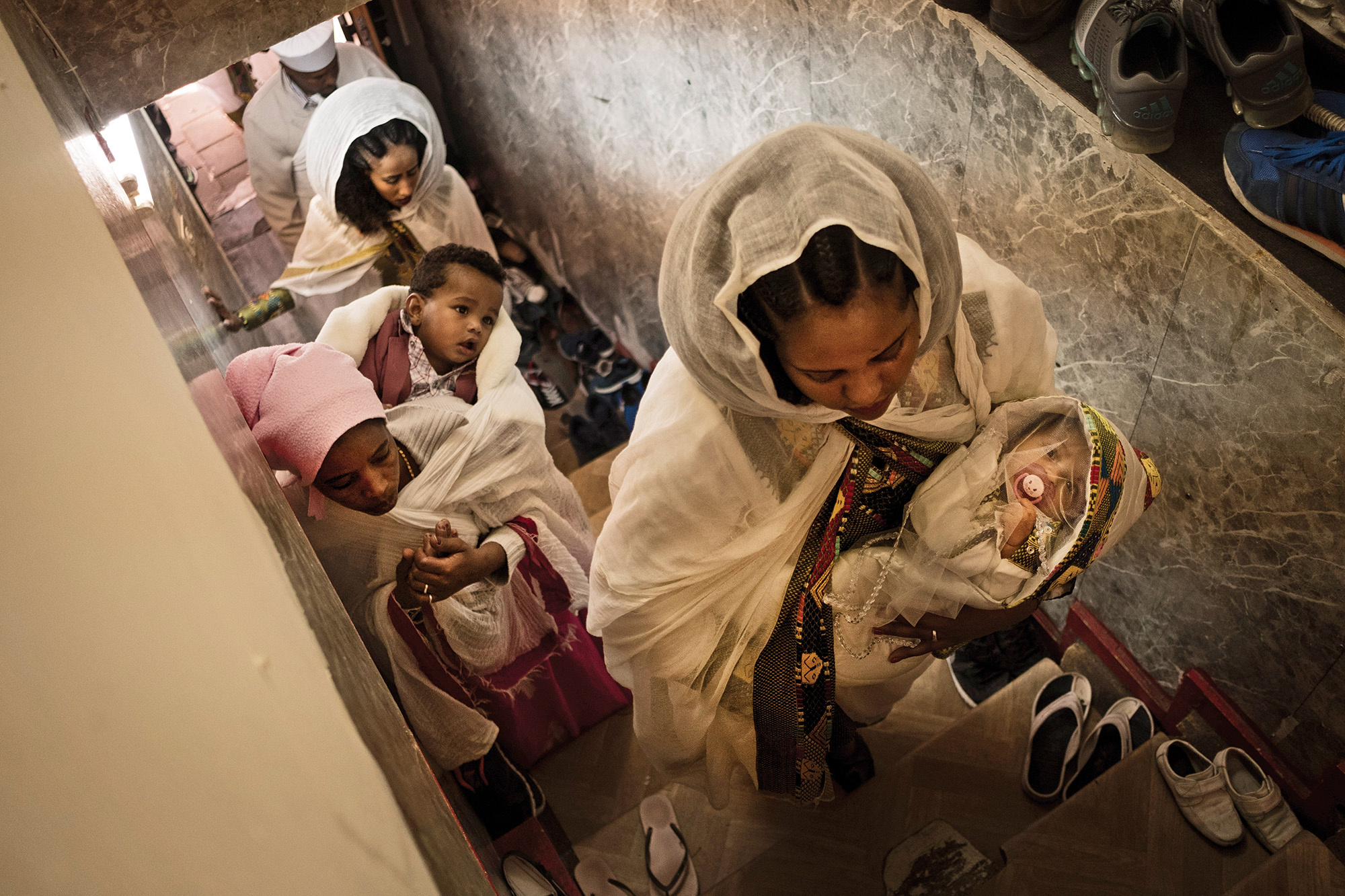 Migrant families arrive at a small church in south Tel Aviv on Feb. 10. The majority of the Eritrean asylum-seekers are Christian, which may help fuel the current controversy. Were they Jews, they would be granted citizenship under Israel’s Law of Return. 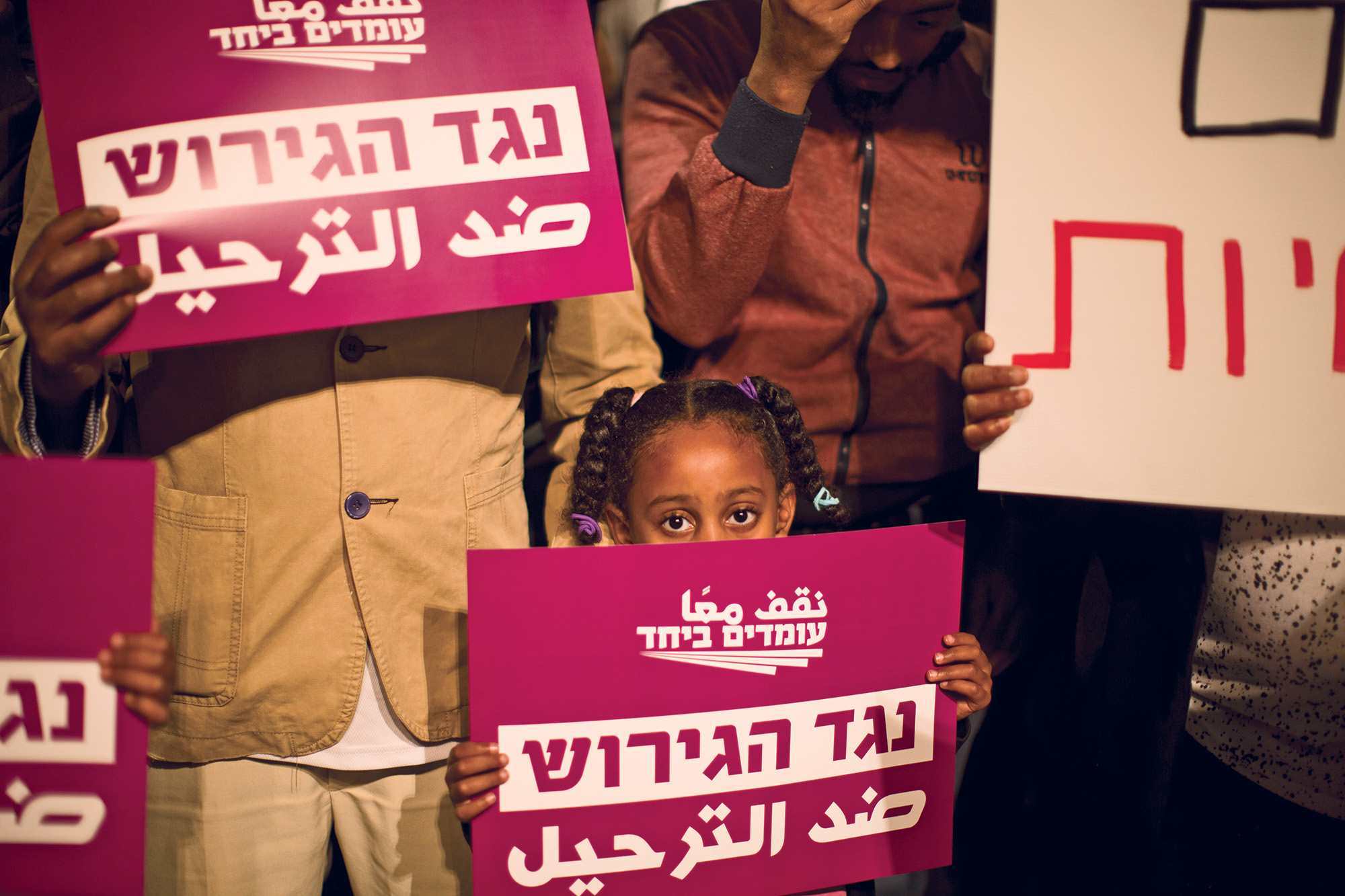 African asylum-seekers and their supporters demonstrate against the Israeli government’s deportation policy in Tel Aviv on Feb. 24. The girl’s sign reads: “Standing together against deportation.”

Kobi Wolf is a photographer based in Tel Aviv. Sarah Wildman is deputy editor (print) at Foreign Policy.

A version of this article originally appeared in the April 2018 issue of  Foreign Policy magazine.

Finland’s envoy to Washington once shared a sauna with the Russian president. Here’s what he thinks the West got wrong about Vladimir Putin.

Ukraine Tries to Blow Up Russia’s Grip on Crimea

Ukraine isn’t taking credit for the strikes, but officials see them as an effort to cut Russian supply lines.