The Long Road to Brexit

Britain’s vote to leave the EU was many years in the making.

On the night of June 23, 2016, the ballots came in divided across the United Kingdom. The results looked more like a Bosnian election than a British one: 69 percent voted to leave the European Union in the ex-mining town of Doncaster, while in the multiethnic London borough of Lewisham, it was 70 percent for Remain. Britons’ votes in the Brexit referendum weren’t so much a response to EU membership as the expression of a new social divide.

The Brexit debate crystallized identities long in the making. The narrow final result (52 percent to 48 percent in favor of Leave) did not mean the country was willing to split the difference but that it had been split in two. Then came Britain’s 2017 general election, which marked the final breakdown of the country’s industrial-style politics, long dominated by a party of bosses and a party of workers.

The new fault lines run along differences in education and race, not the ownership of the means of production. Getting a college degree changes people’s outlooks, making educated members of the white majority vote more like immigrants and their descendants. Those who don’t have degrees have been convinced that their culture is being overrun by newcomers who exploit educated cosmopolitans’ naive tolerance. Meanwhile, a small nativist elite, fed up with being derided as xenophobic, now finds itself making common cause with retired industrial workers.

Members of that elite see increasing levels of education as having created a class of rootless individuals, denounced by Prime Minister Theresa May as “citizen[s] of nowhere.”In David Goodhart’s view, their intern-ationalist orientation, together with that of immigrant communities, is undermining the cohesion of the nation-state and democratic consent for the welfare state. Goodhart, the author of The Road to Somewhere (Hurst, 280 pp., $18.36), argues that this new class of cosmopolitans — the “Anywheres” — has abandoned the white British “Somewheres,” whose desire to maintain roots in homogenous communities has trapped them at the wrong end of an unforgiving global economy.

Though he is wrong about the effects of immigration, Goodhart is right that people now identify themselves based on their attitude toward it: as Leavers and Remainers. These two tribes already live in different parts of the country and consume different media. Now they have neat labels to identify themselves, and they interpret data and events in ways that reinforce their prejudices.

For instance, these two sects have come to understand the same economic data very differently. Though British economic growth in 2017 (at 1.7 percent) was lower than that of the eurozone (2.3 percent), according to Eurostat, the EU statistics office, Leave voters remain bullish about Britain’s economic prospects; Remainers are gloomy and sustain themselves with the belief that Brexit is so irrational that it will somehow be stopped. A survey, taken by British pollster ICM on Jan. 26, is typical: 75 percent of Remain voters said they thought Brexit would have a negative impact on growth, while 58 percent of Leave voters said they thought it would be positive. 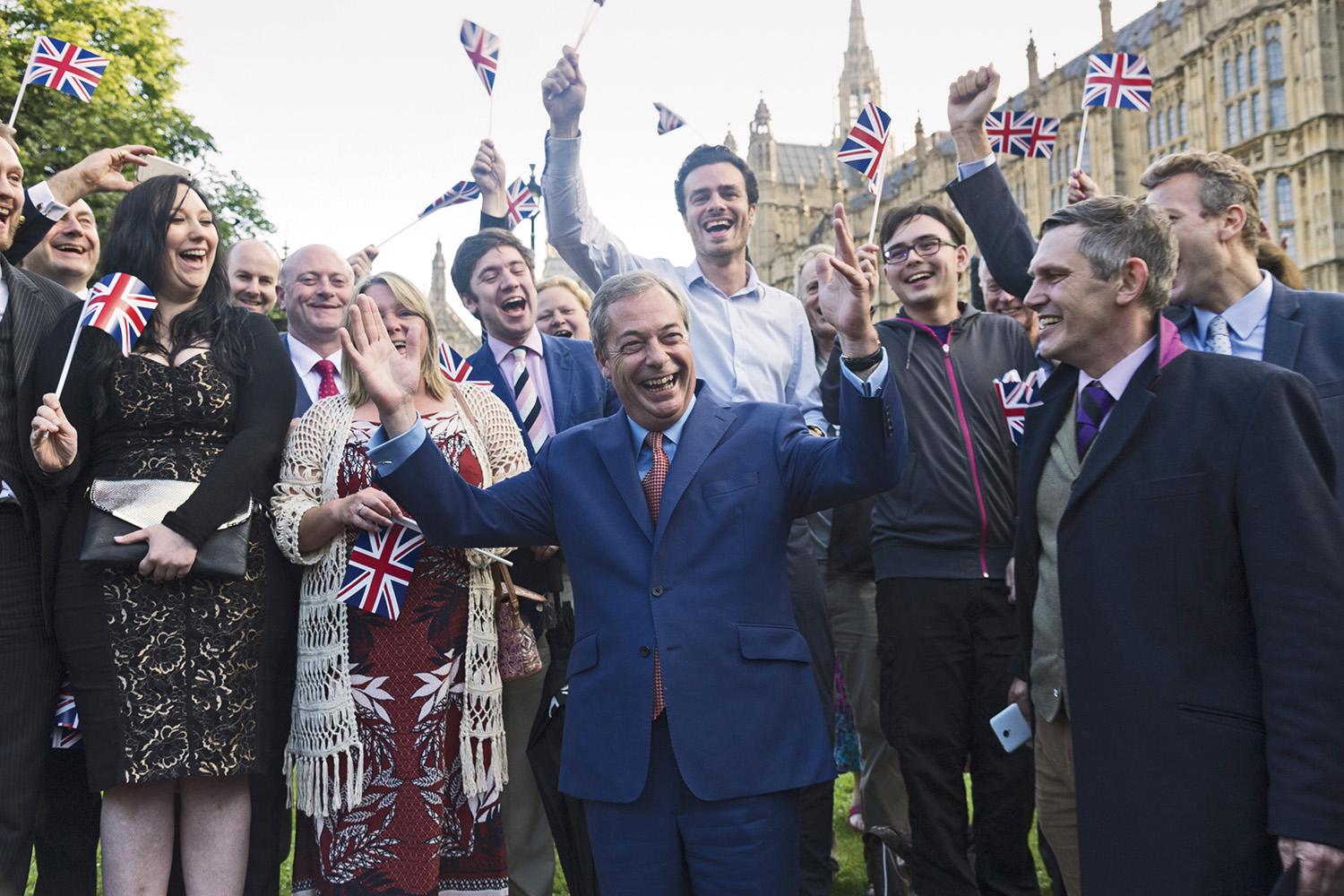 Immigration dominated both the referendum campaign and May’s post-Brexit policy. Hostile to immigration while she was home secretary from 2010 to 2016, May rejected a “soft” Brexit that would have kept the U.K. in the single market because it wouldn’t allow the country to limit Europeans’ freedom of movement.

Less remembered is how David Cameron (whose Conservative Party I advised from 2005 to 2008) also gave the issue such importance. Cameron made being able to restrict EU immigration a major demand of the “renegotiation” he held before the referendum. The Leave campaign pounced on his failure to deliver (he got only a time-limited, single-use right to delay access to part of the British welfare system), and nearly two years after the Brexit vote, immigration remains the defining issue, eclipsing even the Leave campaign’s lie that Brexit would add 350 million pounds per week to the country’s coffers, which could supposedly be spent on the iconic British National Health Service.

Why then, even after the vote to leave, has immigration remained so central to political debates? Immediately after the referendum, when it became clear that many Labour Party voters had chosen to leave the EU, a consensus formed among Labour members of Parliament terrified of losing support from their working-class constituents. They claimed fears of immigration were economic — that poorer Britons, hit by a double punch of government spending cuts and Eastern Europeans competing for their jobs, took their anger out on the government by voting to leave.

But immigrants did not drag employment down: Although one study suggests they had an effect on wages, as Jonathan Portes of King’s College London notes, even that study found a reduction of just one penny in the hourly wage. More important, the people most affected by austerity and competition for jobs didn’t vote to leave. Indeed, most Brexit supporters had already retired. Not only did they not have jobs for immigrants to take, but they were also spared the brunt of public spending cuts. The Conservative-Liberal Democrat coalition of 2010 to 2015 exempted health and pensions from the ax and forced the young to bear the costs of austerity through changes in the student finance system, cuts to nonuniversity training, and a squeeze on working-age welfare benefits. Despite this treatment, the young still voted to stay in the EU.

In other words, Brexit wasn’t about the economy.

So, what did motivate Leavers’ hostility to immigration? For Paul Stocker, a young historian of the far-right and author of English Uprising (Melville House UK, 224 pp., $15.27), Brexit was made possible because mainstream politicians adopted the talking points of extremists rather than confronting them. In just over 200 jargon-free but labored pages, Stocker records the history of the British far-right, beginning nearly a century ago with the British Fascisti and Oswald Mosley’s British Union of Fascists and ending with the UK Independence Party in 2017.

He shows how both Labour and Conservative politicians have long used anti-immigrant rhetoric, especially during William Hague’s 2001 campaign in which the then-Tory leader launched a jeremiad against a “metropolitan elite” turning Britain into a “foreign land.” Michael Howard, a later Tory leader — on whose campaign I worked, albeit on national security issues — revived this theme in 2005, running on the slogan, “It’s not racist to impose limits on immigration: Are you thinking what we’re thinking?”

This wasn’t new. Stocker correctly traces how opposition to immigration has pervaded British society since World War II. Indeed, there has always been an anti-immigrant section of the Tory party and a xenophobic branch of conservatism more generally. But if racism and xenophobia have been part of British society for as long as anyone can remember, they can’t have caused Brexit.

Cameron’s premiership, despite his harshness toward Eastern European immigrants, did attempt to distance the Conservative Party from the image of the so-called “Tory Taliban.” But the worst of Tory nativism had not been defeated; it had simply gone dormant. The Leave campaign revived it. The Leavers didn’t mainstream the ideas of the far-right; they amplified, in propitious circumstances, a theme that had always been part of British right-wing politics.

Some of those circumstances, such as the 2015 refugee crisis, were outside Cameron’s direct control; others, such as the expectations of what EU membership involved, were very much within it. Faced with the incompatible demands of EU membership (to allow EU nationals to live and work in Britain on the same terms as Britons working in Europe) and British public opinion (to prevent them from doing so), Cameron thought it would be easier to shift the EU’s legal doctrine.

Against the advice of Ivan Rogers, his chief EU policy official, who warned that the EU wouldn’t budge, Cameron demanded a right to restrict EU immigration and threatened to campaign to leave the EU if Brussels didn’t agree. The EU called his bluff. Cameron lost the referendum and his job.

His onetime deputy prime minister and passionate Europhile, the Liberal Democrat Nick Clegg, believes this strategy is worth another go. His book How to Stop Brexit (The Bodley Head, 160 pp., $9.25) is devoted to plotting the referendum’s reversal. He begins by conceding the anti-European narrative: “I accept that the EU must look and feel different, if we are to stay a part of it.” Feeling the irresistible force of Euroskepticism, he questions whether the EU can restructure itself so that it works for everyone, including the U.K.

What Clegg never explains, however, is why, if Euroskepticism is such an irresistible force in Britain, the country should try again to avoid leaving the EU. As Cameron found out, arguing that “the organization is terrible, so we should stick around to change it” makes for a lousy political slogan.

And why would the EU ever want such a cuckoo back in its nest? The central element of Clegg’s plan is to curtail the free movement of EU citizens to appease the unfounded fears of British public opinion. But while such a concession might be convenient for the U.K., it would be a nightmare for everyone else.

Ending free movement would open up divisions between immigrant-sending countries in Southern and Eastern Europe and advocates of restriction in the north. It would provide a lifeline to beleaguered populists in France and the Netherlands while giving anti-European authoritarians in Poland and Hungary an excuse to say the EU’s promises of fair treatment apply only to “old Europe.” It would in other words destroy the EU in order to save British membership in it.

Far more wisdom can be found in Heinz Bude’s Society of Fear (Polity Press, 160 pp., $22.95). Bude has defied all stereotypes of German sociology professors and produced a direct, elegant, and succinct critique of modern, individualistic society, the anxiety it generates, and the populists who exploit it. He focuses on the insecurity that comes not from one’s own freedom but from everyone else’s. When jobs, marriages, friendships, and social position all become transactional, trust breaks down.

Bude’s central question is, how do we know who we’re supposed to be when nobody recognizes us for what we are? For many Europeans today, nationalism provides an answer. Because you don’t choose your country, it’s the one relationship that can’t be taken away from you. That makes it a convenient starting point for demagogues, who tell voters they deserve to be treated well, no matter how they’ve behaved or what other people who disagree with them may think.

Yet only the half of British citizens who voted to leave the EU find such nationalism reassuring. Remain voters see it as a threat that could turn their friends and neighbors into second-class citizens and see them separated from their loved ones by administrative edict. To cope, they have started building their own communities around their own tribal, self-reinforcing identity. Majorities of Remainers now demonize Leave voters as “closed-minded,” “selfish,” and “hypocritical” when speaking to pollsters.

They have money and supporters in the media. What they don’t have is leadership. The opposition Labour Party is led by Jeremy Corbyn, who considers the EU a capitalist plot that Britain is better off without. Meanwhile, anti-Brexit campaigners follow the orders of an old guard dominated by Clegg, former Prime Minister Tony Blair, and Andrew Adonis, a pro-European member of the House of Lords. These men refuse to accept that their strategy to reform the EU into something British xenophobes could live with has been bankrupt from the start.

By conceding the nativists’ main assertion — that immigration is damaging and has to be reduced — they have left the cosmopolitan, internationalist other half of Britain leaderless. And sadly, it appears that their strategy will have to fail once more before a new British internationalism can be born.

This article originally appeared in the April 2018 issue of Foreign Policy magazine.

Garvan Walshe is a former national and international security policy advisor to the British Conservative Party and the Executive Director of TRD Policy.