In July 2017, a group of nine Chinese students and faculty from Huazhong University of Science and Technology participating in a summer program at the University of Illinois at Urbana-Champaign (UIUC) formed a Chinese Communist Party branch on the third floor of Hopkins Hall, a campus dormitory.

The group held meetings to discuss party ideology, taking a group photo in front of a red flag emblazoned with a hammer and sickle, according to a July 2017 article and photos posted to the Huazhong University website. The students’ home institution had sent four teachers on the trip, directing them to set up the party cell to strengthen “ideological guidance” while the students were in the United States.

In July 2017, a group of nine Chinese students and faculty from Huazhong University of Science and Technology participating in a summer program at the University of Illinois at Urbana-Champaign (UIUC) formed a Chinese Communist Party branch on the third floor of Hopkins Hall, a campus dormitory.

The group held meetings to discuss party ideology, taking a group photo in front of a red flag emblazoned with a hammer and sickle, according to a July 2017 article and photos posted to the Huazhong University website. The students’ home institution had sent four teachers on the trip, directing them to set up the party cell to strengthen “ideological guidance” while the students were in the United States.

One Chinese exchange student who studied at UIUC in the fall of 2017 says that before embarking on the study tour in Illinois, the students had to attend a lecture on the dangers of the Falun Gong, a strongly anti-party spiritual group banned in mainland China but active in the United States.

After the students’ arrival in Illinois, their home university asked the group to set up a temporary party branch and requested that the students hold a viewing party to watch the 19th party plenum in October, the major party planning conference held every five years. (The plenum was the subject of a major global propaganda push, with Chinese embassies and consulates reaching out to Chinese community organizations around the world, asking them to organize events for their members.)

The exchange students at UIUC were also asked to report on any potentially subversive opinions their classmates may have evinced while abroad, according to the student.

“After we went back to China, we had one-on-one meetings with our teachers. We talked about ourselves and others performance abroad,” the student says. “We had to talk about whether other students had some anti-party thought.”

Illinois is not alone. Party cells have appeared in California, Ohio, New York, Connecticut, North Dakota, and West Virginia. The cells appear to be part of a strategy, now expanded under Chinese President Xi Jinping, to extend direct party control globally and to insulate students and scholars abroad from the influence of “harmful ideology,” sometimes by asking members to report on each other’s behaviors and beliefs. 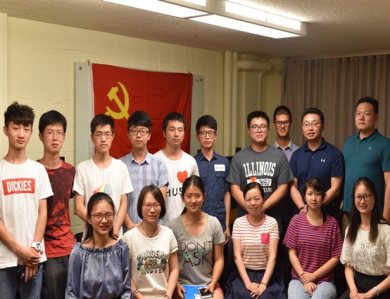 Members of a Chinese Communist Party cell at the University of Illinois at Urbana-Champaign hold a meeting on July 20, 2017. (Fair Use/Huazhong University of Science and Technology)

These overseas cells fit in with the party’s broader goals, says Samantha Hoffman, a visiting fellow at the Mercator Institute for China Studies in Berlin. “You still know that if you actively protest against [the party], or if you make some kinds of comments, you know that that could harm you later on,” she says. “Information gets around. It’s a way of controlling what you are willing to do.”

Since assuming office in late 2012, Xi has implemented a sweeping campaign to consolidate more power in the party’s hands. A major reorganization announced in late March transferred control of key government bureaus to party organs, changes that appear to undo some elements of the party-state divide set up by party leader Deng Xiaoping in the 1980s.

The overseas party branches are typically established by a group of Chinese exchange students or visiting scholars at the direction of their home institution’s party committee, according to articles and reports viewed by Foreign Policy. Each cohort forms its own cell, which is typically then disbanded when the group returns to China.

The party isn’t shy about the purpose of these new branches. “The rising number of overseas party branches is a new phenomenon, showing the growing influence of the [Chinese Communist Party] and China,” according to a November 2017 report in the party-aligned Global Times newspaper. “Overseas party cells are also responsible for promoting party and government policies.”

The UIUC public affairs office declined to comment on whether it was aware that party cells were being established on campus.

“We take the safety and security of all of our students seriously and work extremely hard to ensure that they have the opportunity to freely pursue the full educational experience we promised them when they chose to come to Illinois,” the university said in a statement to FP.

China’s effort to establish party branches at universities abroad has already hit some road bumps. In November 2017, a group of visiting Chinese scholars at the University of California, Davis attracted international media attention after it was revealed that they had founded a party branch on the Davis campus.

The scholars disbanded the branch shortly after its creation, citing unspecified concerns over compliance with “local laws.”

Yet other efforts appear to have gone largely unnoticed.

In August 2017, three teachers and five visiting scholars from Zhejiang University of Technology School of Pharmacy formed a party cell at the University of California, San Diego, holding meetings in a campus dormitory in which they selected their party secretary and discussed Xi’s recent speeches.

In July 2017, a group of visiting teachers from Shanghai Business School set up a party branch at West Virginia University College of Business and Economics, where they held joint events with the Confucius Institute there, according to an article posted to the Shanghai Business School website. Other branches have been set up at the University of Bridgeport in Connecticut, Ohio State University, Northern Illinois University, and the University of North Dakota’s aviation department, according to Chinese-language articles published on WeChat.

Grouping students into party cells while abroad sounds like a “downward extension” of a policy that has long been applied to high-ranking Chinese officials who travel overseas, says Andrew Chubb, a fellow at the Princeton-Harvard China and the World program. “This is important information that should be carefully considered by universities hosting exchanges. Host institutions need to make sure they are familiar with the kinds of situations their exchange students may be in,” he says.

The party cells popping up on campuses across the United States aren’t the Communist Party’s only expansion abroad. The U.S.-based party branches are part of a growing network of cells located on campuses in Canada, Mexico, Chile, Australia, France, Germany, the Netherlands, Spain, Italy, Portugal, Greece, South Korea, Thailand, and elsewhere.

One hub for the establishment of party cells on campuses around the world is Shanghai International Studies University, which has partnerships with institutions in 56 different countries and regions, including in the United States. According to the November 2017 Global Times report, the university’s School of European and Latin American Studies started setting up party branches at its study abroad locations in 2009; it now operates party cells in a number of countries, including Spain, Portugal, Chile, Greece, Mexico, Italy, and the Netherlands.

The cells aren’t always used for ideological purposes. In March 2011, as the Arab Spring protests devolved into a civil war in Libya, Beijing sent a warship to the region to evacuate all 35,000 Chinese nationals there. A small group of Chinese students on Crete, members of a party cell at the University of Athens, participated in the evacuation effort, according to an article in the People’s Daily, the Communist Party’s main newspaper.

Helping to evacuate compatriots from a war zone is the type of humanitarian work many university groups would want to promote, but the students’ mobilization demonstrates Beijing’s growing capacity to establish functional party cells in Western countries that can be activated if needed.

“The party branches are the channel through which political power is exercised. It does not mean good or bad — power is not that,” says Peter Mattis, a China analyst at the Jamestown Foundation. “The way and purpose for which it is used is what matters.”

At least one Chinese university connected to the military has established party branches abroad as well. In 2012, the National University of Defense Technology, an institution affiliated with the People’s Liberation Army (PLA), set up eight overseas party cells, including in the United Kingdom, according to a report in the official PLA Daily.

The branches were required to collect written ideological reports from members each quarter and submit them to their political department. The goal, according to the PLA Daily, was to strengthen the “management” of overseas students and to “resolutely resist the corrosion caused by harmful ideology.”

For Chinese students abroad, there’s a clear message, according to Hoffman of the Mercator Institute.

“You know that the party’s there,” she says. “It’s integrated directly into your study abroad experience.”

Xinjiang's detainees are the latest victims of a deep insecurity.

A relentless war on free spaces for Chinese exiles stems from past revolutions.

China’s Communist Party Is Making Its Own (Virtual) Reality

Propaganda is getting an upgrade with technological tricks.