An airstrike that killed a senior Houthi leader shows that the Emirates is growing more assertive in its military operations.

On Monday evening, video began circulating online of a black-and-white drone feed monitoring a two-car convoy driving north along Road 45, east of Hodeidah, Yemen. In the video, the drone's target — a blue Toyota Land Cruiser — turns onto a side street. Seconds later, it is struck by a Chinese-made Blue Arrow 7 missile.

The driver of the second vehicle slams on the brakes. He and his companions rush to the lead car, now in flames. “Identify the target,” an officer orders, monitoring the drone feed from an operations room in the United Arab Emirates. The survivors start to move away from the wreckage. “Kill them! Kill the people!”

At 2:02 p.m., the second strike hits. The command room erupts in applause. “Good hit guys, good hit! We got this son of a dog’s car,” an officer cheers in footage reviewed by Foreign Policy.

On Monday evening, video began circulating online of a black-and-white drone feed monitoring a two-car convoy driving north along Road 45, east of Hodeidah, Yemen. In the video, the drone’s target — a blue Toyota Land Cruiser — turns onto a side street. Seconds later, it is struck by a Chinese-made Blue Arrow 7 missile.

The driver of the second vehicle slams on the brakes. He and his companions rush to the lead car, now in flames. “Identify the target,” an officer orders, monitoring the drone feed from an operations room in the United Arab Emirates. The survivors start to move away from the wreckage. “Kill them! Kill the people!”

At 2:02 p.m., the second strike hits. The command room erupts in applause. “Good hit guys, good hit! We got this son of a dog’s car,” an officer cheers in footage reviewed by Foreign Policy.

Saleh al-Samad, the president of the Houthis’ Supreme Political Council, was killed in the drone strike, delivering the deathblow to an already stagnant Yemeni peace process. Samad was regarded as a conciliatory figure within the Houthi rebellion and had sought to reach a negotiated settlement to Yemen’s civil war. He was scheduled to meet with Martin Griffiths, the U.N. special envoy for Yemen, on April 28.

The exact date of the strike is still unclear, however. The Houthis announced Samad’s death on Monday, and several Western news outlets reported that he was killed the prior Thursday. But Samad was reportedly at a funeral on Saturday, indicating the strike that killed him likely took place on Sunday, April 22.

Samad’s death comes as Yemen enters its fourth year of civil war. In 2014, the Houthis took control of the country’s northwest, including the capital, Sanaa. The following year, a Saudi-led coalition, which includes the UAE, started military operations to unseat the Houthis in a conflict that has resulted in more than 10,000 deaths in Yemen.

The strike, which is the first successful assassination of a senior figure in the Houthi rebellion, highlights the growing military assertiveness of the UAE. Since 2016, the Gulf nation has been trying to establish itself as the West’s primary counterterrorism partner in the region while simultaneously bolstering its military capabilities through arms deals with Beijing.

Above: Live drone feed footage of the strike that killed Samad and his companions. Below: Footage from the UAE command room as officers monitored the strike being conducted.

“They are working incredibly hard to be the new entrepreneurial contractor in the region, both politically and militarily,” says Farea al-Muslimi, an associate fellow at Chatham House. “They no longer want to remain on the sidelines. Yemen is one of the battles where they think they can improve both their credentials and capabilities.”

The UAE has invested heavily in military aid to coalition-backed forces in Yemen. It has constructed various security units, seen as proxy forces by the United Nations, to fight al Qaeda in the Arabian Peninsula on the southern coast. Now, the UAE is directing its efforts to support Tareq Saleh, the nephew of late President Ali Abdullah Saleh who is leading an offensive to retake the strategic port of Hodeidah from the Houthis.

“In recent days, we had been closely monitoring the Houthi leadership’s movements,” says a senior commander of the coalition’s ground forces advancing from the port of Mokha.

The strike that killed Samad was part of the Saudi-led coalition’s offensive on Hodeidah. The Saudi ambassador to the United States, Khalid bin Salman, even tweeted about the strike earlier this week, claiming it was in retaliation for Houthi missile attacks. Samad “vowed [a] couple of weeks ago to make 2018 the ‘year of ballistic missiles on KSA,'” the Saudi ambassador wrote. “The response to him was a direct hit under the leadership of HRH Minister of Defense.”

Though the Saudis have claimed credit for the strike, the intelligence for the attack was routed through Tareq Saleh’s staff to the UAE, which also carried out the operation.

The UAE did not respond to a request for official comment

Former President Saleh — who was ousted in 2011 during the Arab Spring — waged 10 years of war against the Zaydi revivalist Houthi insurgency attempting to overthrow the government. In 2014, Saleh entered into a partnership with the Houthis as an efficient means of undermining his successor, President Abed Rabbo Mansour Hadi. However, late last year, after a fierce battle in the capital, the alliance of convenience broke down resulting in Saleh’s death

Tareq Saleh and his men were forced to seek refuge in the UAE, bringing with them a deep knowledge of the Houthis inner workings

“We still maintain a talking relationship with some of the Houthis. … Sometimes, our agendas align,” explains a senior coalition commander overseeing operations to retake Hodeidah. 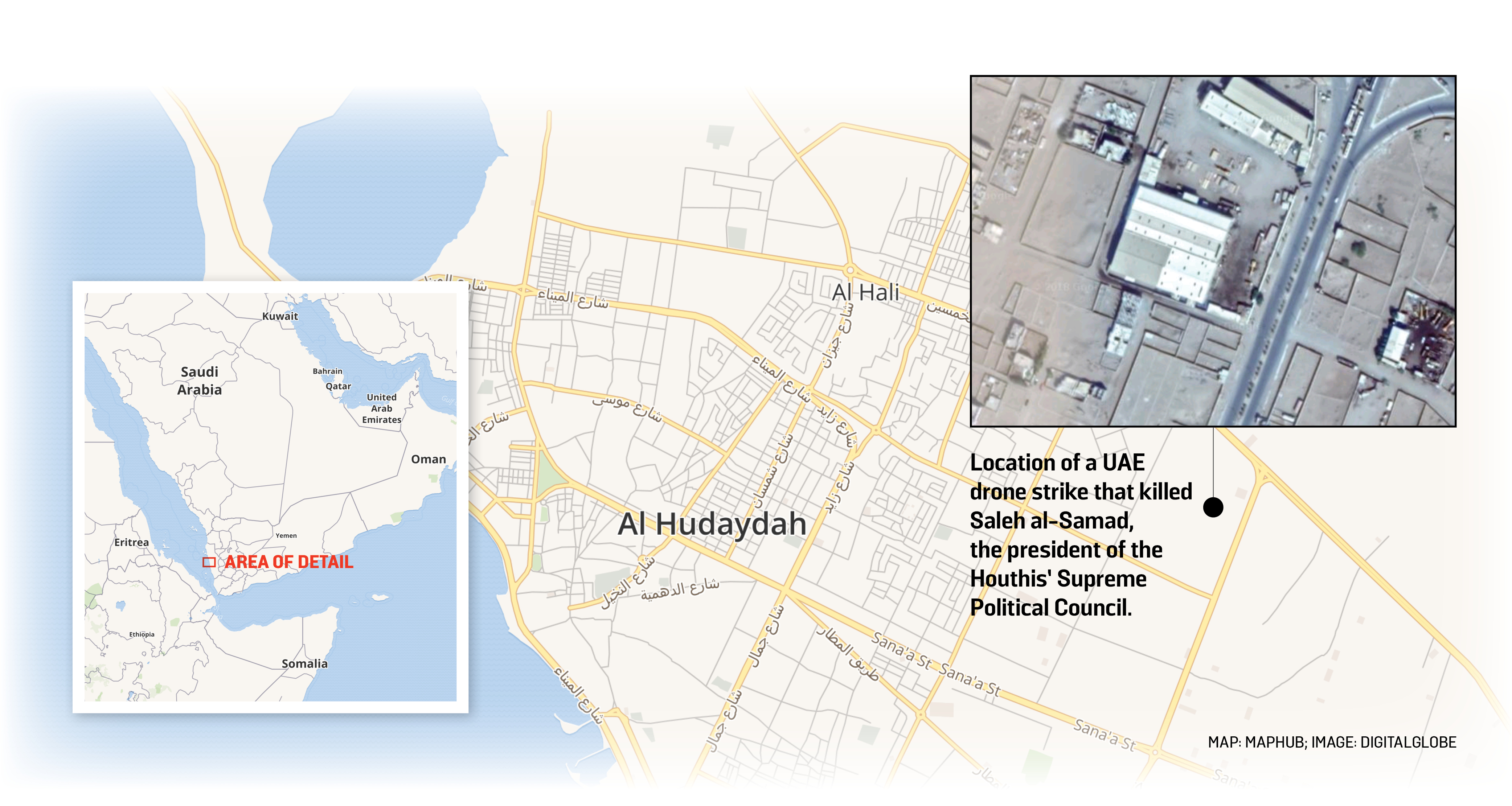 Samad’s death was not an isolated incident. A number of key Houthi figures, who shared close ties to former President Saleh, have been killed recently. Mansour al-Saidi, the commander of Houthi naval forces; Salah al-Sharqai, his deputy; Nasser al-Qaubari, the major general of Houthi missile forces; and Fares Manea, a notorious arms dealer and former governor of Saada, were all killed in airstrikes over the last week.

Samad’s death is likely to exacerbate existing divisions within the Houthi movement, which he had played an important role in holding together. Older members of the movement had been arguing that it was time to negotiate and secure a favorable deal. Samad was seen as a credible negotiator because of his strong links with the Saleh family. Most of the movement’s leadership, in contrast, believed defeating the former president proved the merits of a more aggressive approach.

The strike against Samad shows that the UAE is also seeking to continue the military struggle and is testing new capabilities. Last year, China sold to the UAE the Wing Loong II, an armed unmanned aerial vehicle equivalent to the American MQ-9 Reaper.

“The UAE has been forward leaning in their deployment of drones,” says Justin Bronk, a research fellow specializing in air power at the Royal United Services Institute in London. “We’ve seen that they are willing to use them in politically sensitive areas, such as Libya, where they have conducted strikes.”

Bronk says Samad was killed by a high-explosive warhead that is consistent with an AKD-10, a Chinese-made equivalent of the American Hellfire missile.

This is part of a broader UAE policy of expanding influence throughout the region, with several military bases along the southern coast of Yemen; a larger air base in Assab, Eritrea; and plans for defense cooperation with Somalia. The UAE has also been building relations with Sudan and Senegal, both of which have sent troops to Yemen’s front lines.

“They’re spending a lot to expand their military,” notes a NATO intelligence officer, speaking on condition of anonymity. Washington has given Saudi Arabia and the UAE “carte blanche to expand.”

The UAE’s growing role aligns with U.S. counterterrorism interests. Yemen has seen a dramatic rise in the number of drone strikes since the start of President Donald Trump’s administration. The United States also conducts its own strikes and raids, including a widely reported commando raid in Bayda province in January 2017. That raid, which led to the death of U.S. Navy SEAL William Owens and at least 16 Yemeni civilians, was regarded as a failure.

Having the UAE conduct raids directly relieves both the pressure on, and risk to, American forces, and so the United States has eagerly bolstered Emirati efforts. Washington has also been involved in Yemen’s civil war, providing arms and training to Saudi and Emirati forces as well as direct logistical and intelligence support for the coalition air campaign, including in-flight refueling for coalition aircraft.

But the Samad strike also presents a challenge to Western governments. The United Kingdom, Sweden, the Netherlands, and others have strongly backed the U.N. peace process. As Saudi Arabia and the UAE diversify their sources of equipment, they also increase their ability to operate unilaterally in ways that may diverge from U.S. interests.

“We are following reports of Samad’s death last week, which the Saudi military had publicly taken responsibility for,” a U.S. National Security Council spokesperson told FP.

The aftermath of the strike. “There are body bits of three people,” one man says. They find no survivors.

The United States had previously refused to export armed drones to the UAE, but this month the Trump administration released a new set of policies, loosening previous restrictions. “We will facilitate international partners’ access to U.S. [unmanned aerial systems] in situations where it will enhance those partners’ security and their ability to advance shared security or counterterrorism objectives,” the policy reads. With the UAE already operating Chinese drones in combat missions, and with an expanding Chinese presence in Djibouti, the Gulf could become a new front in the U.S. struggle for influence with Beijing.

In the meantime, the UAE’s nascent war is having consequences on the ground in Yemen. Samad’s successor, Mahdi al-Mashat, who was appointed Monday, is a hard-liner with extensive links to Hezbollah in Lebanon.

Ali al-Bukhaiti, a former senior Houthi figure now based in Amman, Jordan, claims that there is growing puritanism within the movement. “Mashat is the polar opposite of his predecessor: He is tactless, threatens, doesn’t compromise,” he says. “He does not build relationships — he damages them.”

An airstrike that killed a senior Houthi leader shows that the Emirates is growing more assertive in its military operations.